Gaza: Arguments in defence of Israel amount to bullshit-bingo 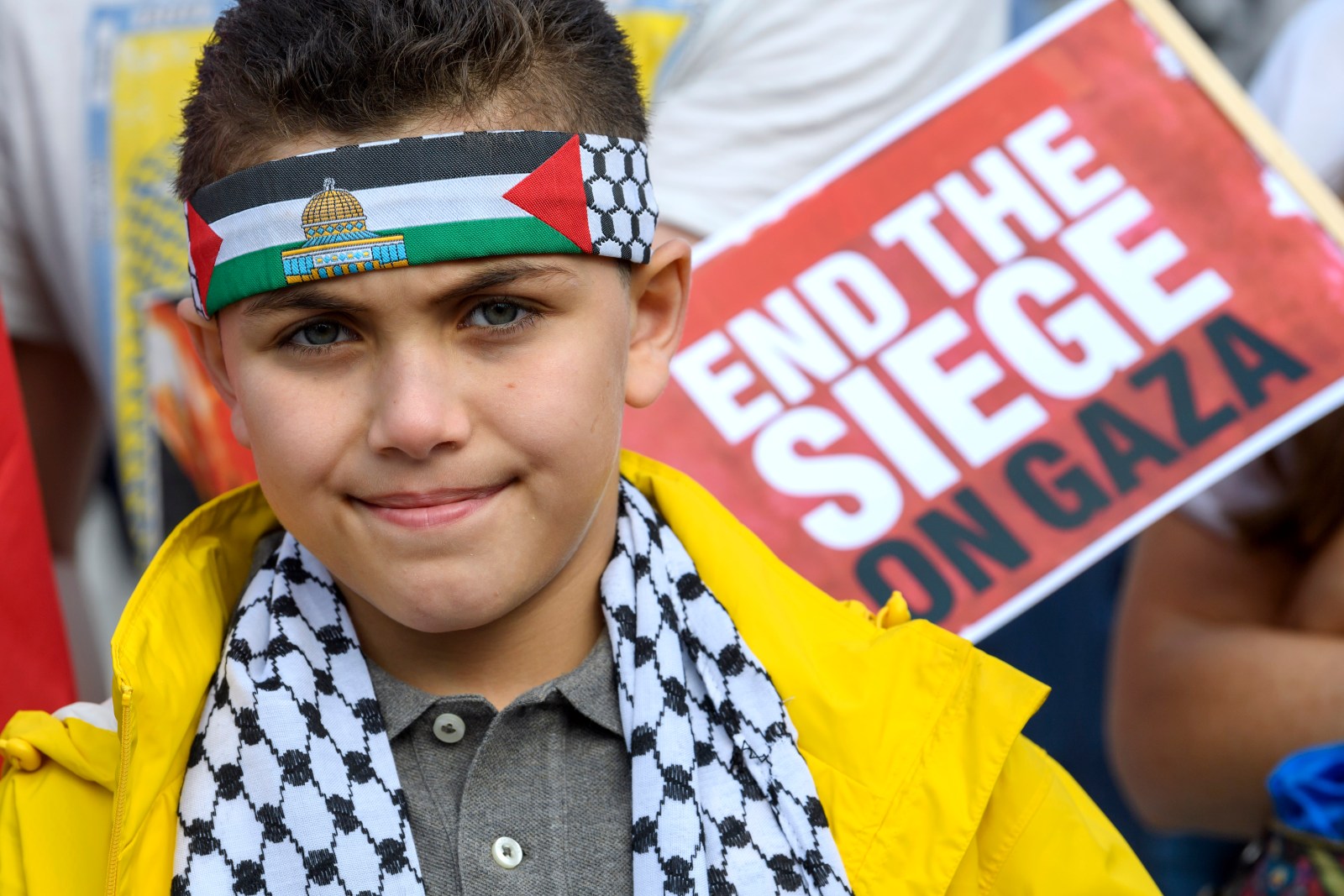 People demonstrate in a rally at the Place des Nations in front of the European headquarters of the United Nations, in Geneva, Switzerland,19 May 2018. EPA-EFE/MARTIAL TREZZINI

What we need urgently are peace and justice. The Arab Peace Plan has been on the table for close to a decade – which offers two states, dismantling the settlements, a solution to the refugee problem, and full recognition of Israel. Israel refuses because of its expansive, colonial nature that plays increasingly to its religious fundamentalists who envisage a “Greater Israel”.

I read Rodney Mazinter’s propaganda, purveyed as a Right of Reply by Daily Maverick, just after reading Nathan Robinson’s article in Current Affairs, Propaganda 101: How To Defend A Massacre. An introductory course in massaging your crimes and dehumanising your enemies.

All I had to do was tick the boxes in the game of bullshit-bingo. More surprising however is when Brooks Spector, one of DM’s editors, in a Facebook post, repeats the nonsense that the occupation of Gaza ended a decade ago, and defends Israel. (Editor’s note: Brooks Spector is an associate editor and does not defend Israel.) So here are the blocks of bullshit bingo (what Robinson calls Propaganda Suggestions):

#1: You are not ideological; you are just following reason where it leads you. Those who disagree with you are soft, irrational, emotional, and feminine.

#2: You are being undermined and assaulted by radicals. It is said that the radicals are violent. It is believed that they are deranged and must be stopped.

#3: The enemy is not reasonable like you. They cannot be understood, for their motives are not rational. They are dark, violent, terrifying, deranged. You only have two options: Kill or be killed. Any killing you do is therefore necessary by definition.

#5: Tell people not to be ashamed of violence against the enemy. Shame is squeamishness, cowardice, betrayal.

#6: The difference between us and them is that we cry when we shoot. With us, killing is the exception, with them it is the rule. We have good civilized values and love life. They have barbaric values and love death.

#7: All you want is what any reasonable person would want. You just want to protect yourself. Is this so much to ask?

#8: There is no alternative. What is the alternative? Can you think of one? No. Because there is none.

#9: We have tried everything. We have given everything we can give. Anything more would literally destroy us. Why do they insist on exploiting our generosity? What more could we possibly do?

To allow your readers a balance to Mazinter’s histrionics, here are some basic facts:

Approximately 80% of Palestinians living in Gaza were ethnically cleansed from Palestine in 1947-8 and 1967. These Palestinians have homes, property, farms and other assets in what is now Israel. These were confiscated and ceded to the state or the Jewish National Fund. Under international law they have a right to return to their land.

Israel has, unusual for any country, never defined it borders because of its expansive nature. So no real “border exists between Israel and Gaza”. Israel continues to violate Gaza territory (air, sea and land) on a daily basis – killing civilians, bombing buildings, shooting at fishermen at sea and killing many.

Israel may have “checked out” from Gaza but it never left. Israel occupies Gaza through a buffer zone consisting of 300m to 500m to 1,000m at times. This became permanent after Operation Cast Lead – where farms and forests were destroyed to construct this military zone. This zone is located in Gaza and with differing estimates constitutes approximately 17% of Gaza (which is 41 km long and 6-12 km wide, with an area of 365m2). Furthermore Israel continues to occupy the nautical space of Gaza set out in international conventions, the Oslo accords and other agreements between the parties. Israel (and Egypt) continues to control borders and airspace, and imports and exports in and out of Gaza. What Mazinter means by giving Palestinians “full control” defies logic. The UN, EU and ICRC continue to regard Gaza as part of the Occupied Palestinian Territories.

Israel prohibits Palestinian citizens of Gaza from leaving, leading Gaza to be described as “the largest open-air prison in the world”, a “concentration camp” or a “ghetto”. Students are unable to take up international scholarships, seriously ill people cannot seek medical attention, and people cannot leave to visit relatives or attend functions.

Israel prohibits entry of critical material and food stuff into Gaza keeping the country impoverished. In addition it pumps raw sewage into the Gazan Sea, severely contaminating the water. 97% of Gaza’s water is contaminated and undrinkable. In operation Cast Lead Israel destroyed water plants and electricity plants in Gaza. The situation is so dire that many international experts, including the United Nations declare Gaza “unliveable”.

Hamas is a legitimate political organisation that was democratically elected in Gaza. People have a right to belong to political organisations of their choice. And occupied people have a right to resist occupation (according to international law) which gives Hamas a right to have a military wing. Hamas has indicated over the last few years its commitment to a two-state solution and have rescinded their odious charter. In fact if one looks at many of the Israeli parties in the Knesset and in government, their ideology is far more toxic, militant and racist than Hamas. Some of them call for the forceful mass transfer of Palestinians to neighbouring countries.

But note how Mazinter distorts the original quote from the Hamas official. This is what the official speculatively said: “If 62 people were martyred, 50 of the martyrs were Hamas and 12 from the people. How can Hamas reap the fruits if it pays such an expensive price?” This means the exact opposite of what Mazinter wants to portray.

The March of Return was a civil society initiative in response to the international call for Palestinians to engage in peaceful protest, just like Soweto, Sharpeville or the Selma to Montgomery marches. They coincided with the Nakba, with the US Jerusalem opening just another provocation. No doubt there were protesters throwing stones or Molotov cocktails, but from distances that posed no threat to Israeli soldiers who were behind reinforcements.

None of these protesters would have breached the fence since Israeli soldiers were protecting them with various means. Importantly if they breached the fence they would have been on the other side of the fence in Gaza, not in Israel because of the buffer zone! They posed no threat to Israeli citizens or soldiers. If they did the IDF would have stopped them from going beyond the fence quite easily.

Israeli soldiers used live ammunition in the form of exploding bullets that cause maximum damage, not simply stop protesters advancing further. Many protesters who were killed were 300 metres away including children, people praying, journalists and medics. Tents protecting civilians were tear-gassed.

Being a member of Hamas or Likud or Labour cannot make one a legitimate target for murder, unless there is imminent threat to life, which in this case there was not. In fact an Israeli general remarked that they knew where every single bullet landed. In explaining child deaths they claimed that because of the small size of children, in aiming for their body the ammunition sometimes hits the head.

Let us never forget that Gaza is part of Palestine, with families in the West Bank and in Israel. It is not some isolated entity that exists outside of a future Palestine.

So let the massacre of 60 people and injury to over 10,000 be a reminder to the world that Israel is a violent, racist and belligerent occupying force. With Trump in power, the right-wing across the world has become emboldened to act with impunity. Unless the rest of the international community intervenes with resolve and material pressure to settle this issue there will be more death and destruction. What we need urgently is peace and justice. The Arab Peace Plan has been on the table for close to a decade – which offers two-states, dismantling the settlements, a solution to the refugee problem, and full recognition of Israel. Israel refuses because of its expansive, colonial nature that plays increasingly to its religious fundamentalists who envisage a “Greater Israel”.

As for the massacre, an independent, international tribunal should investigate. Which Israel refuses. The reason is simple: so that the likes of Mazinter can continue to peddle their hasbara propaganda.

It is apposite to end with the statement of a South African police commander during the Sharpeville massacre: “The Native mentality does not allow them to gather for a peaceful demonstration. For them to gather means violence.” DM

Shuaib Manjra is a member of Open Shuhada Street