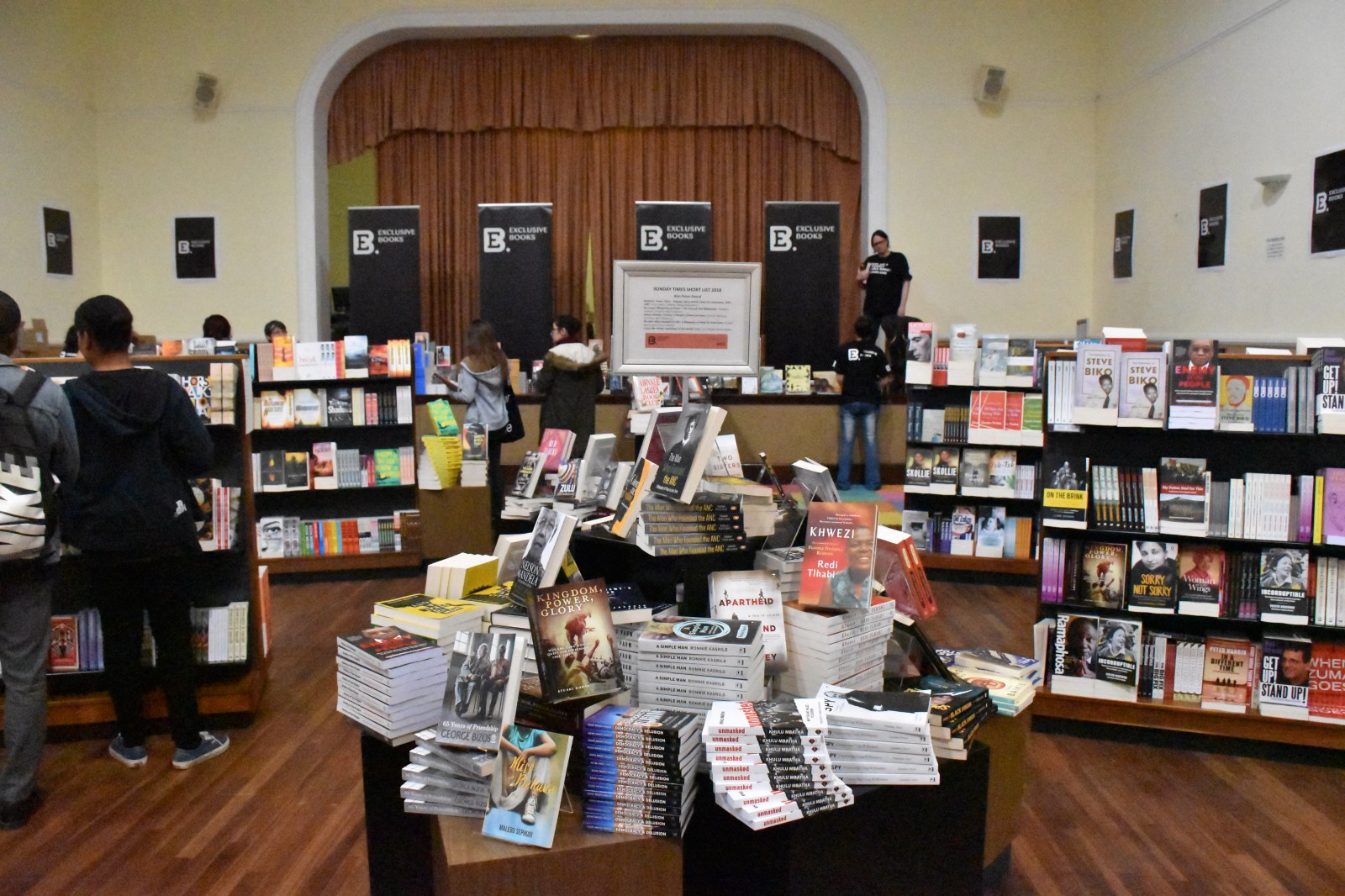 In Franschhoek Town Hall, a pop-up Exclusive Books store showcased some of the year’s most popular novels, many of which pertained to the exposure of corruption in politics, law enforcement, and crime. Photo by Adam Yates

At the Franschhoek Literary Festival at the weekend, the importance of writers in the past year in uncovering state capture took center stage. Many authors had the opportunity to recount their quests for justice and offer advice to eager audiences who wanted to know how to move forward.

Max du Preez’s command to his native country was probably intended as a wake-up call in 2011, a time when a Zuma presidency was fresh and the opportunity for a growing role of independent thinkers and nuanced media analyses was ripe for development.

“The media are not playing a strong enough role to promote a properly informed public opinion,” Du Preez said in the same Daily Maverick Article as his “spine” comment.

This weekend in Franschhoek, “South Africa, grow a Spine!” was draped on a lamppost between venues for the Franschhoek Literary Festival. One of a number of author quotes hung to inspire festivalgoers as they navigated the neighbourhood, Du Preez’s proclamation perhaps captures the theme of the festival better than any other message.

In the last year, it was the work of writers, journalists, and activists that exposed corruption, demanded justice, and ushered in a potential “new dawn” of political leadership and governance. It was these writers who “grew a spine” at the right time. 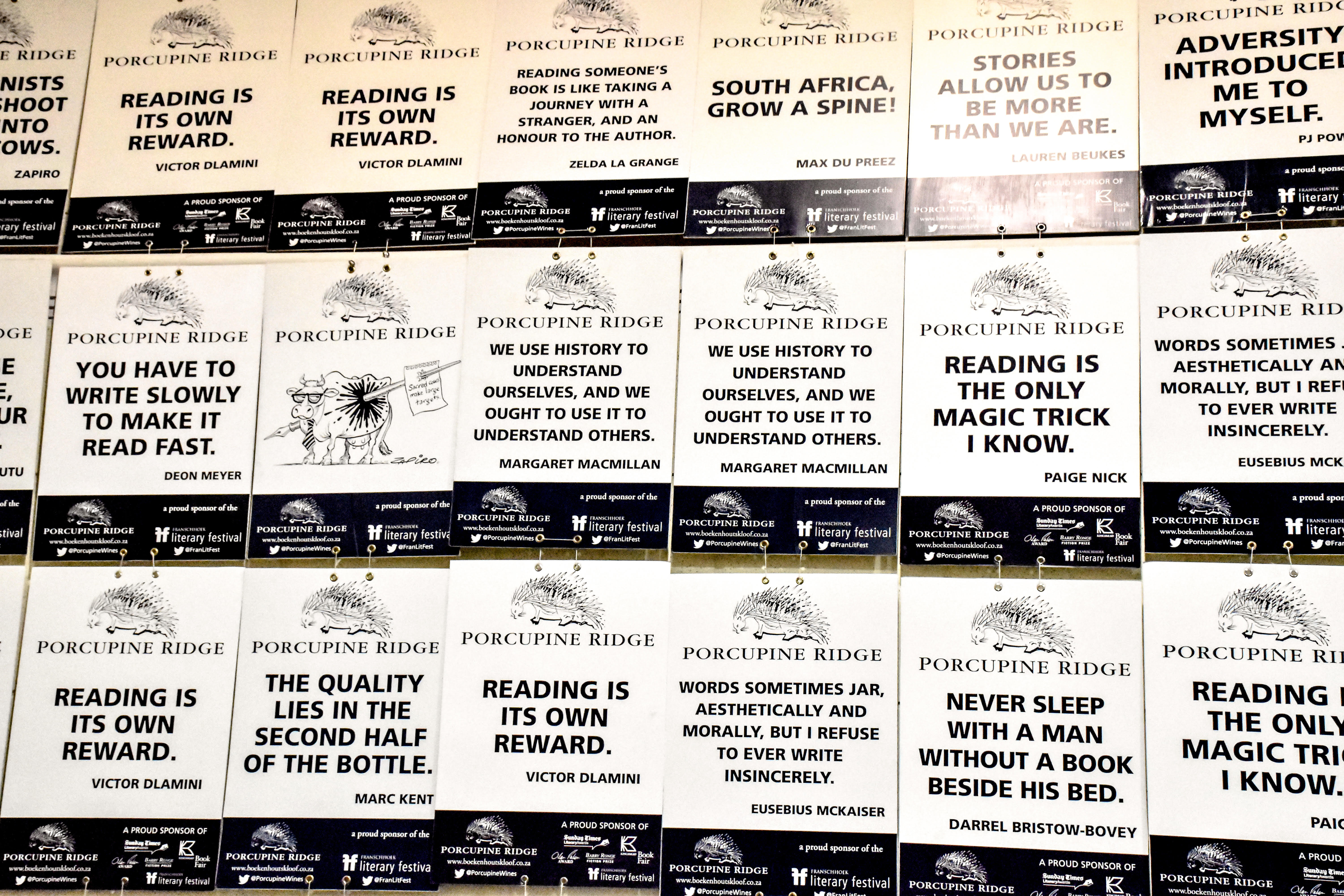 A series of posters with author quotes were hung on the wall in the festival’s headquarters, as well as alongside the Franschhoek streets. Photo by Adam Yates

In the 11 – of the 100-plus – panels Daily Maverick attended at the Franschhoek Literary Festival, the appetite for stories exposing corruption was at its peak. Authors for books such as The President’s Keepers, How to Steal a City, Democracy and Delusion, Hitmen for Hire, Enemy of the People, Ministry of Crime and more drew large crowds to their panel discussions.

As in previous years, the audience of the festival was overwhelmingly white. An issue that has been addressed before, but yet to be completely remedied.

However, the festival did manage to bring together authors from a diversity of backgrounds and subject specialities, offering opportunities for each attendee to find their own niche, occasionally, and productively, pushing audience members out of their comfort zone with hard truths about injustice in 2018. But in those 11, often packed, rooms, stories of death threats, stolen laptops, and high level security to preserve secrecy were commonplace.

The panelists were offered not just the opportunity to reflect but also the chance to envision where this past year can take the country next. In other words, the moderators might as well have posed the question, “We’ve accomplished quite a bit. Now what?”

The authors of the festival failed to offer a singular simplistic answer, and if they had, certainly it would have been foolishly grasping at a solution to a problem that extends far beyond the resignation of a corrupt president.

The largest takeaway is that South Africans can no longer remain complacent. As exhausting as the last year may have been, complacency will enable these institutions of corruption to flourish again once they are out of the spotlight. Be wary of false flags, warned the panelists.

It would be making a mistake to think about State Capture as a thing of the past now that Zuma and the Guptas have been ousted, said Adriaan Basson, author of Enemy of the People. Corruption isn’t gone with Jacob Zuma, Basson argued, nor did it start with him.

“There’s another capture that happened,” continued Crispian Olver, author of How to Steal a City, “and that’s [on] the party (ANC). A criminal syndicate has latched onto it and captured it.”

There is an unaddressed longing in these panels, for, at its most basic level, a government that can function properly, but, on a deeper level, an established democracy in which the promises of the Constitution were vehemently upheld, not just paraded around to prove progressivity.

Some are trying to figure out where South Africa went wrong. And for Rehana Rossouw that requires going back to square one. In her novel, New Times, Rossouw re-evaluated the Mandela presidency by critically looking at the ways in which the former president made mistakes. She explored the question, “How much did we sacrifice for the sake of reconciliation?” And as a result, what are the consequences of these sacrifices we still face today?

The authors, the ones to whom audience members eagerly looked towards for wisdom, insight, hope, and leadership, redirected that quest for justice back onto the patrons of the festival.

“We all sat aback and said let’s give [Zuma] a chance, let’s give him an opportunity, and we almost woke up too late,” warned Jacques Pauw.

Pauw’s bestselling book The President’s Keepers addressed the institutional networks surrounding Zuma which allowed him to retain his power for so long. According to Pauw, Zuma was eventually removed by the people of the country because they had enough, and retention of that revolutionary spirit is absolutely key for South Africa’s future.

The work has just begun.

“At the heart of dysfunction is us,” explained activist Mark Heywood, author of Get Up! Stand Up!. “We’ve learned to tolerate the intolerable.”

Living under State Capture is one example, knowing about the massive structural flaws in the education system is another, still prevalent, one. Heywood points out that the response to the AIDS epidemic changed through what he sees as “social mobilisation”, so why can’t we do the same with basic education?

Heywood hopes the Zuma presidency has taught South Africans a lesson to hold higher institutions accountable, to ensure a constant engagement with those in power.

“It’s important to be sceptical of a new dawn,” said Sisonke Msimang, author of Always Another Country.

“Healthy cynicism is needed within the society,” agreed Ralph Mathekga, who penned When Zuma Goes, back in 2016.

In other words, it’s time to halt appraisals on President Rhamaposa’s regime. To remain hopeful by ignoring reality, explained Msimang, is dangerous. You need to inject ethics into civil service. The fact that many members of Zuma’s reign remain in power and the fact that the private sector has not faced a full-on revitalisation in the wake of corruption charges should be warning signs that the problems have not ceased.

Mathekga is searching for a great unravelling of the private sector.

“We have a strong tradition of the business governing on the people,” he said.

The next step is for South Africans to unshackle themselves from the clutches of a corrupt private sector.

Not every citizen is expected to uncover corruption on their own, but the support of writers and journalists is critical to the ultimate success of the stories. Jacques Pauw admitted he feels protected by the people of South Africa, he knows the integrity of his investigative work will be safeguarded by extensive public interest.

With continuous engagement and demand for these stories, it seems likely that some South Africans have, and hopefully will continue, to grow a spine. DM