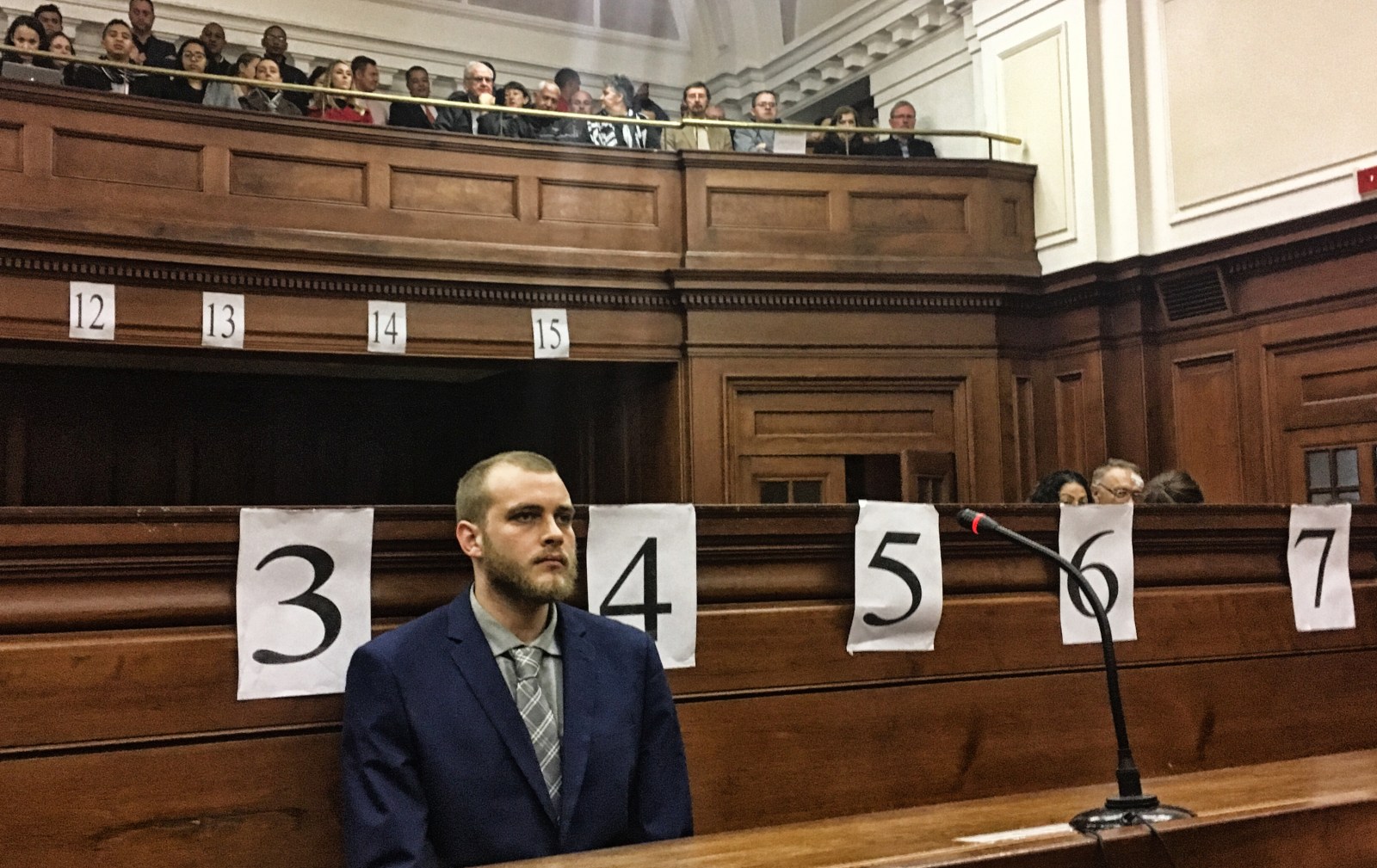 Henri van Breda in court on Monday before the judgment was read. (Photo by Rebecca Davis)

The verdict in the Henri van Breda murder case comes as no surprise to anybody who has been following the case – but the motive behind the slayings was never firmly established.

Henri van Breda is a convicted murderer. On Monday, the 23-year-old was found guilty in the Western Cape High Court of having killed his parents and brother in a savage axe attack in Stellenbosch in January 2015. Van Breda was also found guilty of the attempted murder of his sister, and having wilfully obstructed the administration of justice by fabricating a tale of intruders descending on the family’s home. The verdict comes as no surprise to anybody who has been following the case – but the motive behind the slayings was never firmly established.

Come Tuesday morning, Henri van Breda will have spent his first night in prison as a convicted killer. Shortly after 16:00 on Monday afternoon, Van Breda was handcuffed and led down the stairs of the Western Cape High Court following a verdict in which the 23-year-old was found guilty of one of the most gruesome domestic crimes in South Africa’s post-apartheid history.

Van Breda showed no emotion as Judge Siraj Desai instructed him to stand and informed him that he had been found guilty of three counts of murder, one of attempted murder and one of obstructing justice.

“You understand?” asked the judge.

It took Judge Desai over four hours to deliver the summarised version of his judgment, during which Van Breda visibly struggled to stay awake. Shortly before the lunch adjournment, the young man was succumbing to fatigue, closing his eyes for brief periods before shaking himself awake again.

He gave the impression of someone who was heavily medicated – subsequently confirmed when his lawyer, Pieter Botha, told the court that his client was now on chronic medication for both depression and epilepsy and required incarceration in the hospital wing of Pollsmoor Prison to ensure access to his drugs.

With prosecutor Susan Galloway saying that the state had no objection to this proposal, Judge Desai assented – “subject to [Van Breda] providing adequate medical certificates”.

Van Breda had time only to look briefly in the direction of his most constant supporter – girlfriend Daniella Janse van Rensburg – before being cuffed and led away. Janse van Rensburg, who began her relationship with Van Breda after the killings, has maintained her belief in his innocence and declared him as the “love of her life”.

But for most other observers, Judge Desai’s verdict was a foregone conclusion.

In his summary judgment, Desai shied away from strong moral condemnation of Van Breda but repeatedly used the words “peculiar”, “unlikely” and “improbable” in summarising the defence’s case.

Van Breda’s story – that at least two attackers had managed to penetrate his family’s home without detection, wipe out his parents and brother and leave his sister for dead, while stealing nothing – always strained credulity. But the state’s case was not without challenges. As Desai noted, there was “no direct evidence implicating the accused”, and Van Breda’s team argued that the existing circumstantial evidence was not sufficient to cast Van Breda’s guilt as the only reasonable conclusion.

Almost as soon as Desai began to read his judgment, however, it became apparent which way the wind would blow for the accused.

Convincing evidence given by workers and neighbours on the gated estate where the family lived had painted the picture of an almost unassailable fortress. The judge reminded the courtroom that the De Zalze estate’s perimeter featured an electrified fence, an alarm system, CCTV cameras, and patrols throughout the night by guards and dogs. No signs of any intruders were detected on the night of the murders.

“It is highly unlikely that security was breached by an intruder outside the De Zalze estate,” Judge Desai said.

The crime scene was also inconsistent with a burglary, because nothing was stolen – while Van Breda himself had admitted on the stand that his family had no known enemies.

The judge accepted the state’s evidence that the weapons used to commit the murders – a small axe and a kitchen knife – came from within the Van Breda household. He asked why intruders bent on murder, rather than robbery, would arrive at their victims’ house without a weapon.

“There was no reason for an intruder to wipe out almost an entire family,” Judge Desai said.

“The violence prevalent in the country does not serve as a convincing explanation. If the intention of intruders was to kill everyone, it would be senseless not to bring along a weapon.”

The judge found further that Van Breda’s conduct at various stages of the case had been “inexplicable” – from choosing to smoke cigarettes in the kitchen rather than attend to the medical needs of his dying family members, to Googling the number of emergency services rather than consulting a list of emergency numbers in front of him on the kitchen fridge.

During court proceedings, Judge Desai said, Van Breda’s demeanour had oscillated between “uncomfortable” and “superbly confident” – even, at times, sarcastic.

“The accused did not show a great deal of emotion,” the judge said.

Judge Desai ultimately accepted the testimony of state experts that the superficial wounds found on Van Breda were probably self-inflicted. He said the injuries were in marked contrast with those inflicted on the four other family members “with a tremendous amount of force”.

Such was the brutality of the attack, the judge found, that “there can be no doubt that the attacker had the intention to kill the deceased and to kill Marli”. He also said that the attack “had to be planned”, with weapons taken from the first floor of the family home to the second.

Though Desai did not elaborate further in his summary judgment, these two aspects of the verdict – that the crime was both pre-meditated and intentional – will be of significance in sentencing proceedings.

“In conclusion…” said Judge Desai, while two policemen casually took up positions behind Van Breda, although “each piece of evidence on its own might not be enough to prove guilt”, the cumulative evidence pointed to only one reasonable inference: that Van Breda was guilty of the crimes of which he stood accused. 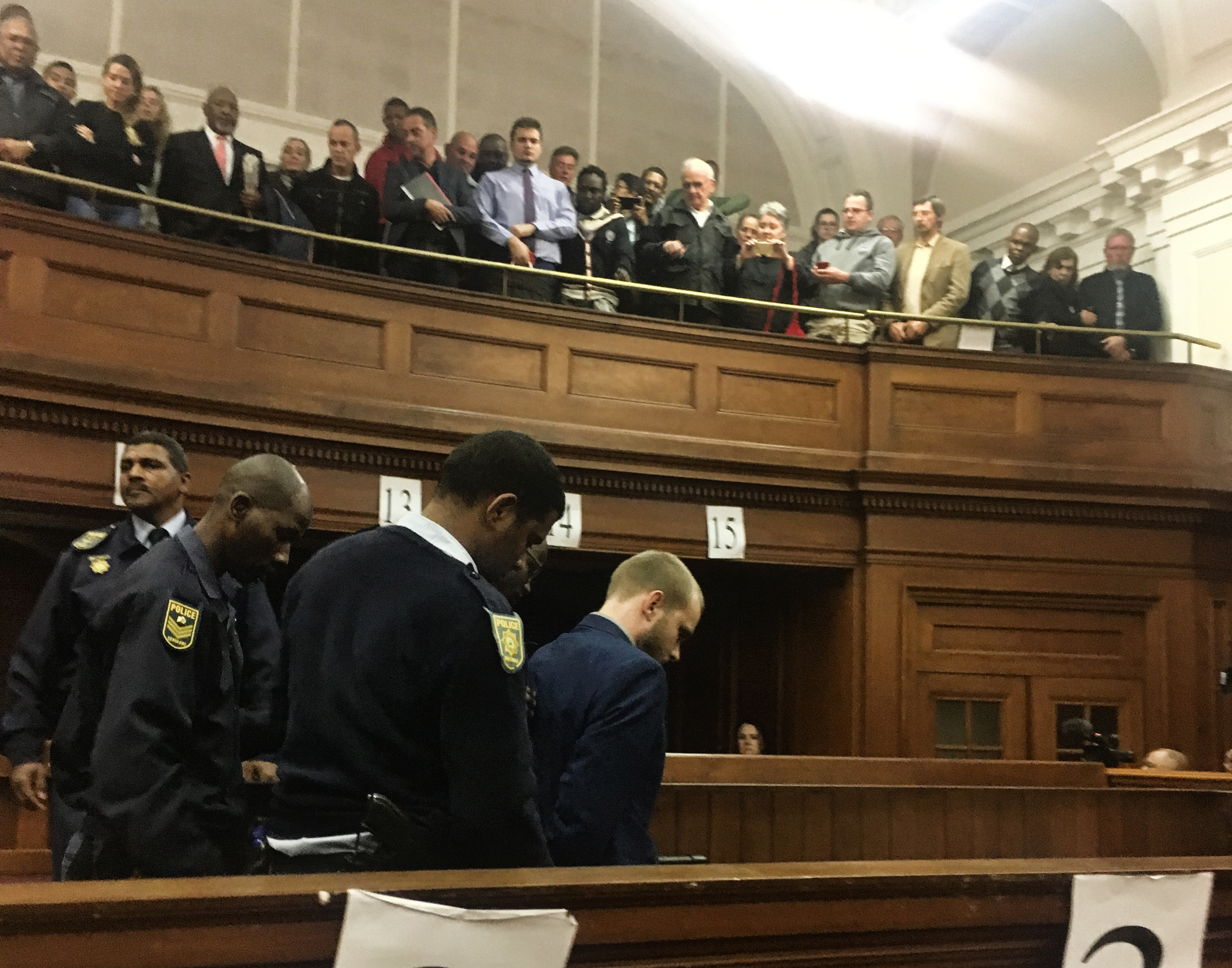 There were no gasps in the packed courtroom as the judge delivered his final verdict, and no dramatic shows of emotion – though Van Breda’s girlfriend was later seen leaving the courtroom in tears.

Though the verdict will come as a relief to many – particularly in light of the state’s previous bungling of high-profile cases like that of Shrien Dewani – one unsatisfying element for those who like loose ends neatly tied is that a motive for the murders was never established.

“This court does not speculate about motive or intention,” Judge Desai stressed at one point.

This is not unusual in South African criminal law, where motive is not necessary for a conviction. But it does mean that questions will continue to be asked. Rumours of a tense relationship between Henri van Breda and brother Rudi were denied by defence witnesses who testified on family dynamics.

Speculation that Van Breda wanted access to his father’s vast business earnings remained just that – although now, of course, he will forfeit all right to the money. In accordance with the South African legal principle of die bloedige hand erf nie (the bloody hand does not inherit), Van Breda will be ineligible for any further spoils from the estimated R150-million fortune.

On Monday, lawyers did hint as to one of the prevailing mysteries of the case: what relations are like now between Van Breda and his sister Marli, who reportedly cannot remember anything of the night of the murders due to retrograde amnesia caused by the brain injuries she sustained.

Van Breda had reportedly said that if he was acquitted of the murders, he intended to emigrate immediately to Canada, where an aunt and uncle live. Now, he can expect to travel no further than the road between Pollsmoor Prison and the Western Cape High Court – where sentencing is expected in a fortnight’s time. DM