Why Minister Lindiwe Sisulu got the decision right on Gaza 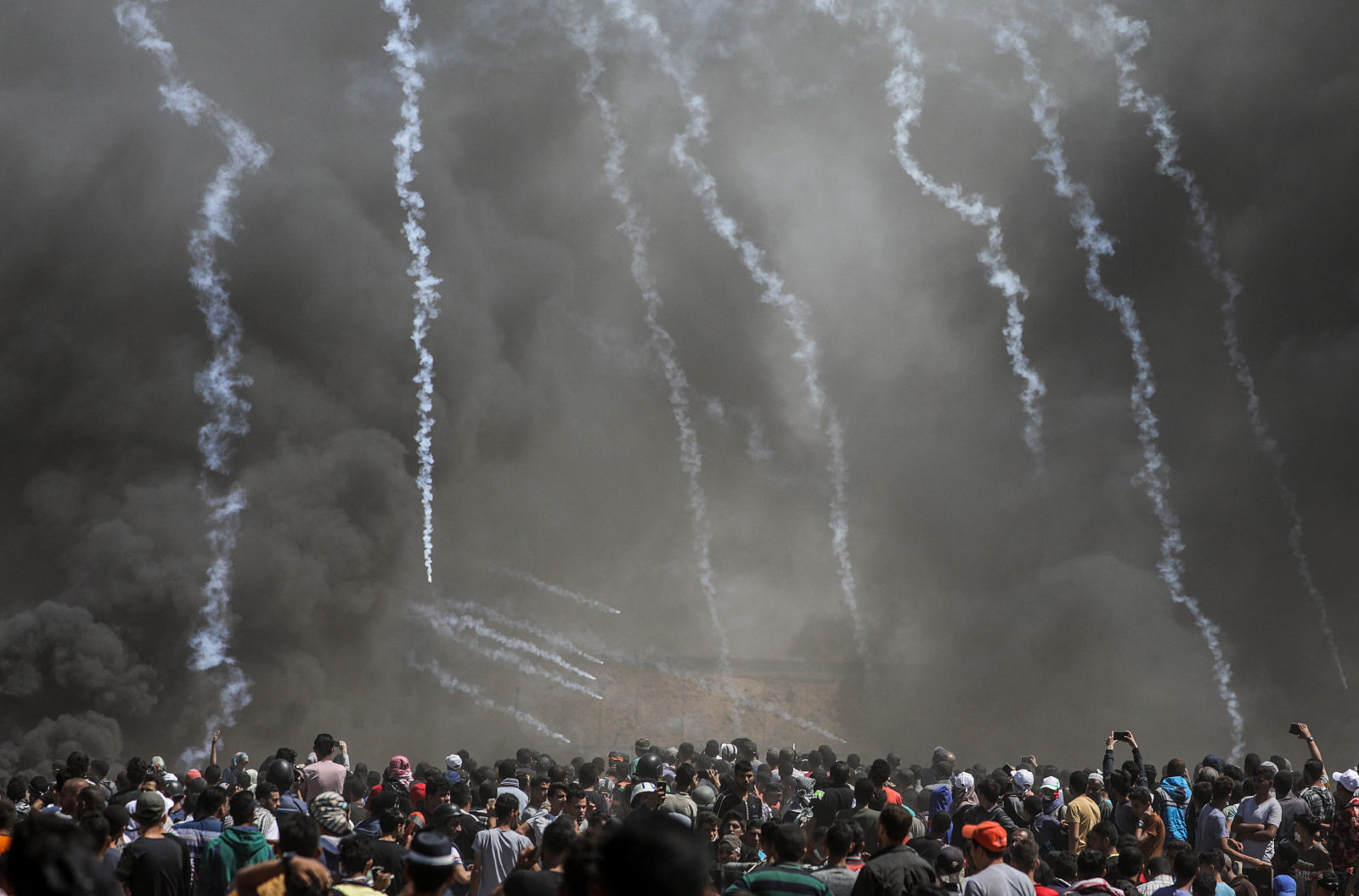 Israeli army fires tear gas grenades at Palestinian protesters during clashes after protests near the border with Israel in the east of Gaza Strip, 14 May 2018. According to media reports, at least 41 Palestinians were killed and more than 1800 wounded during clashes in Gaza-Israeli border during clashes against the US embassy move to Jerusalem as well as marking Nakba Day. Palestinians are marking the Nakba Day, or the day of the disaster, when more than 700 thousand Palestinians were forcefully expelled from their villages during the war that led to the creation of the state of Israel on 15 May 1948. Protesters call for the right of Palestinians to return to their homeland. EPA-EFE/MOHAMMED SABER

The South African government’s response to the outrage in Gaza last week was calibrated quite appropriately to the interests this nation has at stake in that troubled part of the world.

In her first real test of dealing with an international crisis this past week – the deliberate killing by Israel Defence Force snipers of approximately 60 Palestinian demonstrators and the wounding of hundreds of others – South Africa’s newly appointed Foreign Minister Lindiwe Sisulu recalled the South African Ambassador to Israel in an act of calculated, strong diplomatic protest at this egregious action by the Israel Defence Force.

There are numerous reasons that can be cited concerning the correctness of this decision.

No one can doubt this when we see demonstrations on our own streets by large numbers of South Africans outraged by the conduct of Israel’s armed forces, while hearing at the same time that Foreign Minister Lindiwe Sisulu is accused by Israel’s supporters of double standards for condemning, in a robust diplomatic manner, the shooting of hundreds of Palestinians demonstrating against Israel’s occupation and settlement of Palestinian lands.

The Israel-Palestinian problem is an issue that has ongoing consequences in our society and it has the potential to lead to violence, if extremists decide to attack synagogues or Jewish cultural symbols such as gravestones in cemeteries, or even worse, members of our South African Jewish community, in acts of claimed retribution for Israeli killing and wounding of Palestinian demonstrators. This has certainly happened elsewhere in the world, although thankfully has been an isolated phenomenon in South Africa.

Our government’s response to last week’s events in Gaza has to reflect the overwhelming sentiment of our society, with polling on this issue indicating that four out of five South Africans supported Minister Sisulu’s decision to recall our ambassador from Tel Aviv.

Given our nation’s history, it is only natural that most South Africans identify closely with the Palestinian struggle for nationhood and are hostile to the behaviour of an Israeli government that regards it as acceptable to kill and wound – in a single day – hundreds of civilians giving vent to their pent-up anger at Israel’s ongoing frustration of their national aspirations and persistent occupation of Palestinian land.

It cannot be lost on the critics of Minister Sisulu’s action that at precisely the same time that a bloodbath was taking place in Gaza, the family of US President Donald Trump were exultantly opening a new United States Embassy in Jerusalem, Israel’s capital city.

The decision to move the embassy was taken by President Trump in violation of the United States’ own agreements with Israel and the Palestinians and – here it must be stressed – decided this for purely domestic political reasons and certainly not for any diplomatic reason intended to contribute to the building of peace between the Palestinians and their neighbour, Israel. This decision violates 70 years of intricately crafted diplomacy around the disputed status of Jerusalem, a locus claimed as capital by both the Palestinians and Israelis.

Let us consider the reasons advanced by Minister Sisulu’s critics that she was engaging in double standards. In this regard, they point to the fact that no similar action has been taken against either the Syrian or Myanmar governments for their brutal treatment of their own citizens. This comparison does not stand up to serious scrutiny. In both cases referred to, the conduct of those governments was within an entirely domestic context and involved no firing at civilians by soldiers across recognised international boundaries, as was the case in Gaza.

It also cannot be lost on Minister Sisulu’s critics that South Africa experienced a similar event in March 1960, when armed police fired on and killed 69 civilians and wounded hundreds more at Sharpeville, claiming that they, like the Israel Defence Force, feared a fence would be breached and lives lost as a consequence. That day will live in infamy as one of the worst acts of the brutality of apartheid in our nation.

In explaining the decision to recall our ambassador, Minister Sisulu noted that she had contacted US Secretary of State Mike Pompeo, asking for US action to try to mitigate what was taking place. Only after hearing that her request was not possible was the final decision taken to recall ambassador Sisa Ngombane.

During her media conference, Minister Sisulu referred to South Africa’s support for a two-state solution to the unresolved Israeli-Palestinian problem and to the South African government’s recognition of the right of both the Palestinians and Israelis to live in peace and security as neighbours. It is a long time since we have heard such words.

Minister Sisulu also pointedly referred to the dilemma the South African government faces in dealing with the December 2017 ANC Nasrec decision to call for the downgrading of South Africa’s Embassy in Israel to a liaison office, a status similar to that of South Africa’s diplomatic mission in the Palestinian Authority’s capital of Ramallah.

It is heartening to see that after nine years of the Zuma government’s insubstantial engagement with the Palestinians and Israelis, which took the form of futile expressions of “solidarity” with the Palestinians, with no manifestation that South Africa’s commitment went beyond the mouthing of cheap slogans and boycotting engagement with the Israelis as an expression of outrage. Now at last, in Minister Sisulu’s action and explanation, we are hopefully seeing once more of the green shoots of serious diplomacy to engage the Palestinians and Israelis about their unresolved problems.

It is trite constantly to refer to South Africa’s experience of resolving our own hideous history by meeting the challenge to end apartheid and create a flourishing democracy as a basis for engagement with Palestine and Israel, if we cannot do so from a position of integrity and with the gravitas that comes from serious engagement with both sides.

The Zuma government’s sloganeering expressions of solidarity with Palestine, accompanied by restrictions on contact with the government of Israel for the past nine years, have achieved exactly what for the Palestinians? It has been feel-good stuff that brought insignificant victories for officials who could say they prevented this or that form of engagement with Israel. To what end? What was the tangible outcome for the Palestinians? It was the diplomacy of the powerless and ineffective and it resulted in a commensurate Israeli expression simply to dismiss South Africa’s posturing as an irrelevance.

It is a matter of fact that the road to Ramallah goes through Jerusalem. Accordingly, if we desire to return to the days of Nelson Mandela and Thabo Mbeki, where both the Palestinians and Israelis engaged seriously with our government and our former presidents about the resolution of their problems and genuinely sought our good offices to facilitate and assist their dialogue with one another, then perpetuation of the Zuma-era policy of diminishing our engagement with Israel by reducing the status of our diplomatic mission in Israel makes no sense.

It may make us feel good, but what will that accomplish for the Palestinians? Since the operation of our liaison office in Ramallah is in very large measure dependent on the goodwill of the Israelis, what interest would they have in continuing to facilitate its operation if we seek to attack Israel’s international legitimacy by downgrading our diplomatic relations with them?

At various times when Turkey, Egypt and Jordan have taken exception to Israel’s conduct, like our government has this past week, they have recalled their ambassadors in protest. But they have never reduced the status of their diplomatic missions in Israel. We need to take our cue from Israel’s neighbours, who have far greater involvement in the well-being of the Palestinians than we do.

Minister Sisulu, when she was minister of intelligence, had substantial experience of direct engagement with the Palestinians and Israelis. She travelled in the region and met Israeli and Palestinian leaders at the highest level. She is also steeped in the demands of what it takes to be a serious player in the Middle East region.

Her high-level engagement with the United States and the decision to recall our ambassador from Israel this past week over the horrific killings at Israel’s border with Gaza demonstrates not only her gravitas and understanding of the requirements for a nation that aspires to a permanent role on the UN Security Council, a seat which we will soon assume again, but shows that South Africa may once again be willing to become a substantial player which invests its international prestige in trying to assist to bring about resolution to the Palestinian-Israeli problem. Furthermore, it also recognises the intense domestic interests of religious communities in our society who have deep ties in Palestine and Israel.

The South African government’s response to the outrage in Gaza last week was calibrated quite appropriately to the interests this nation has at stake in that troubled part of the world.

Additionally, this is what good international citizenship demands. If there are those who think that there are grounds for criticism of our robust diplomatic protest at Israel’s actions in Gaza, that is unfortunate, because the offence it may give is more than abundantly rewarded by the demonstration internationally that President Cyril Ramaphosa’s government intends to make South Africa a serious international player again. DM

Malcolm Ferguson is a retired former South African diplomat. He served in and worked with Middle East region for 17 years and was Chief Director Middle East in the Department of International Relations and Co-operation, as well as a former Ambassador to Israel and South Africa’s first Representative to Palestine.