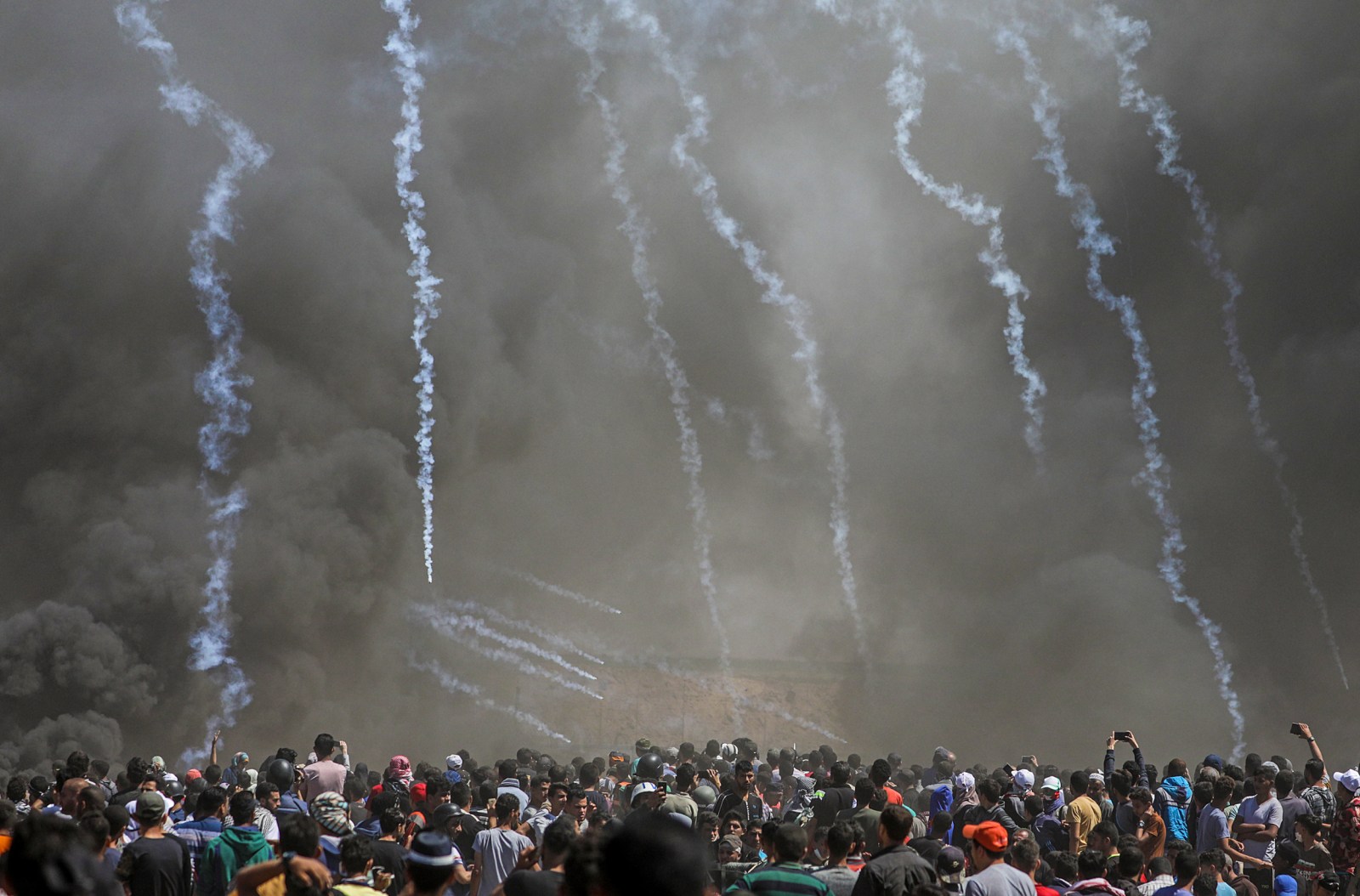 Israeli army fires tear gas grenades at Palestinian protesters during clashes after protests near the border with Israel in the east of Gaza Strip, 14 May 2018. EPA-EFE/MOHAMMED SABER

The latest killings of dozens of Palestinian protesters, including children, by the Israeli military is yet another horrific example of the use of excessive force and live ammunition in a totally deplorable way and, in some instances, committing what appear to be wilful killings constituting war crimes. One way to stop these brutal killings is to stop the delivery of arms and military equipment to Israel.

Unless Israel ensures effective and independent investigations resulting in criminal prosecutions of those responsible, the International Criminal Court must open a formal investigation into these killings.

The United States is by far Israel’s main supplier of military equipment and technology, with a commitment to provide $38-billion in military aid over the next 10 years. But other countries, including European Union member states such as France, Germany, the United Kingdom and Italy, have licensed large volumes of military equipment for Israel.

Unless Israel ensures effective and independent investigations resulting in criminal prosecutions of those responsible, the International Criminal Court must open a formal investigation into these killings and serious injuries as possible war crimes and ensure that perpetrators are brought to justice.

The time for symbolic statements of condemnation is now over. The international community must act concretely and stop the delivery of arms and military equipment to Israel. A failure to do so will continue to fuel serious human rights abuses against thousands of men, women and children suffering the consequences of life under Israel’s cruel blockade of Gaza. These people are merely protesting their unbearable conditions and demanding the right to return to their homes and towns in what is now Israel.

For weeks the world has watched in horror as Israeli snipers and other soldiers, in full protective gear, and behind the fence, have attacked Palestinian protesters with live ammunition and tear gas. Despite worldwide condemnation, the Israeli army has not reversed its illegal orders to shoot unarmed protesters.

Israel continues to violate international standards with the use of live ammunition and excessive force. Under international law, firearms can only be used to protect against an imminent threat of death or serious injury. Early medical reports from the recent outbreak of violence in Gaza indicate that dozens of people were shot in the head or the chest.

According to military experts as well as a forensic pathologist who reviewed photographs of injuries obtained by Amnesty International, many of the wounds observed by doctors in Gaza are consistent with those caused by high-velocity Israeli-manufactured Tavor rifles using 5.56mm military ammunition. Other wounds bear the hallmarks of US-manufactured M24 Remington sniper rifles shooting 7.62mm hunting ammunition, which expand and mushroom inside the body.

According to a recent statement by Médecins Sans Frontières, half of the over 500 patients admitted to its clinics were treated for injuries where the bullet had literally destroyed tissue after having pulverised the bone. This information has been confirmed by humanitarian NGOs as well as testimonies collected from doctors by Palestinian human rights groups in Gaza.

Doctors at the European and Shifa hospitals in Gaza City told Amnesty International that many of the serious injuries they have witnessed are to the lower limbs, including the knees, which are typical of war wounds seen in the 2014 Gaza conflict.

Many had suffered extreme bone and tissue damage, as well as large exit wounds measuring between 10 and 15mm, and will probably face further complications, infections and some form of physical disability, such as paralysis or amputation. Reports of the high number of injuries to the knees, which increase the probability of bullet fragmentation, are particularly disturbing. If true, they would suggest that the Israeli army is intentionally intending to inflict life-changing injuries.

Doctors also said that they had observed another type of devastating injury characterised by large internal cavities, plastic left inside the body but no exit wounds.

In most of the fatal cases analysed by Amnesty International, victims were shot in the upper body, including the head and the chest, some from behind. Eyewitness testimonies, video and photographic evidence suggest that many were deliberately killed or injured while posing no immediate threat to the Israeli soldiers.

And while some protesters may have engaged in some form of violence, this still does not justify the use of live ammunition.

Since the weekly Friday “Great March of Return” protests that began on the Gaza Strip on 30 March, Amnesty International’s research has revealed that Israel is carrying out a murderous assault against protesting Palestinians with its armed forces killing and maiming demonstrators who pose no imminent threat to them.

If we want to stop this then governments worldwide must impose a comprehensive arms embargo on Israel following the country’s disproportionate response to mass demonstrations along the fence that separates the Gaza Strip from Israel.

Otherwise the killings will continue. DM