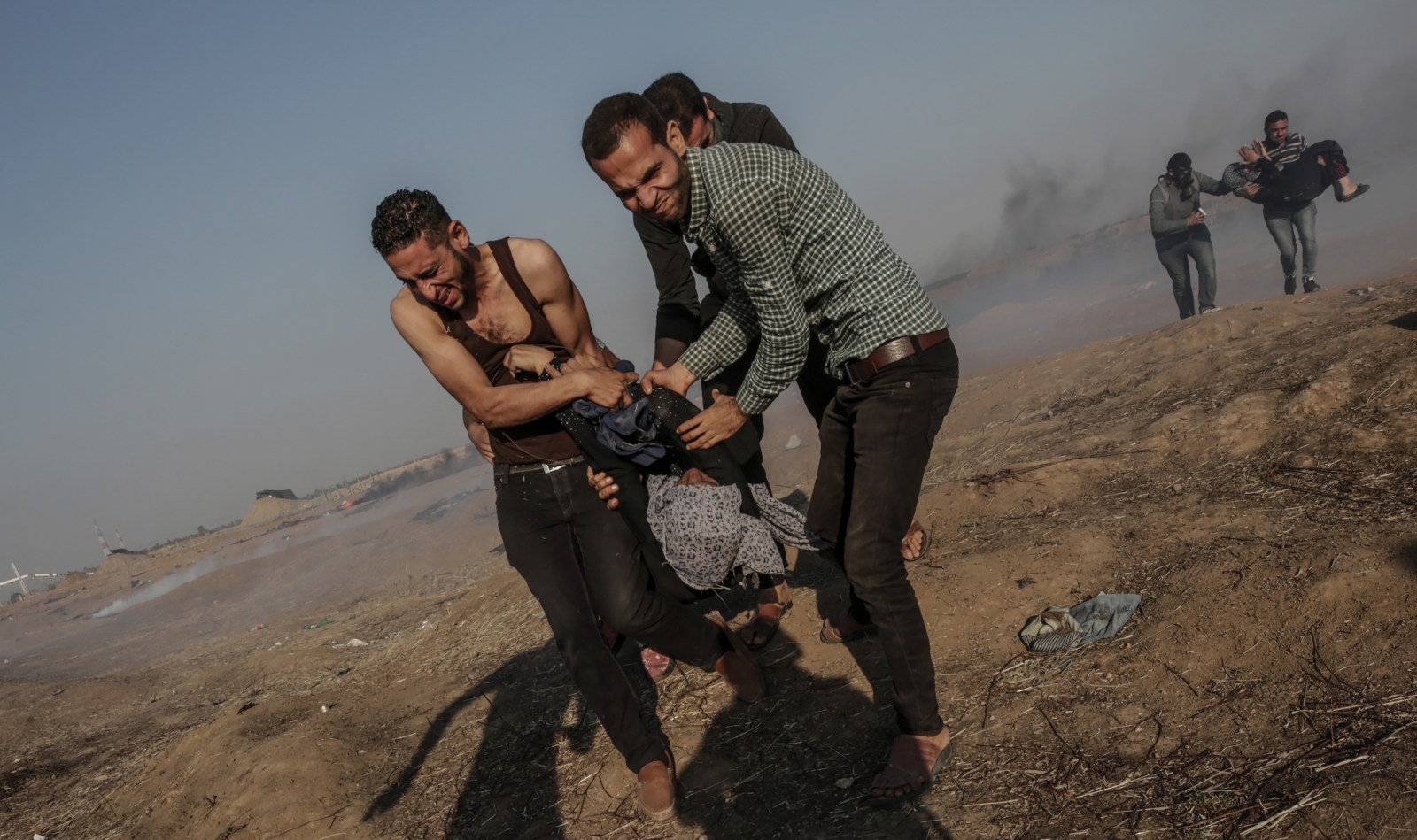 Palestinians protesters carry a wounded female protester during clashes near the border with Israel in the east of Gaza Strip, 15 May 2018. At least 62 Palestinian protesters were killed and more than 2,500 others were injured at the Gaza-Israeli border during clashes against the US embassy move to Jerusalem as well as marking the Nakba Day. Palestinians are marking the Nakba Day, or the day of the disaster, when more than 700 thousand Palestinians were forcefully expelled from their villages during the war that led to the creation of the state of Israel on 15 May 1948. Protesters call for the right of Palestinians to return to their homeland. EPA-EFE/MOHAMMED SABER

Apartheid is not a story that ends in victory in all our history books. It is a story about a struggle for freedom – a freedom that is incomplete in Palestine. The international community has watched Israeli Apartheid continue through Israeli control of land, freedom of movement, and the economic, social, and political lives of the Palestinians.

In November 1973, the United Nations General Assembly adopted the International Convention on the Suppression and Punishment of the Crime of Apartheid, which in 1998 became recognised as one of the seven crimes against humanity in the 2002 Rome Statute.

Despite the gains that have been made through international legislation, Israel still treats Palestinian life as less than human and without facing trial for its daily crimes against humanity.

Israeli Apartheid is the only remaining apartheid state in the world today and force is used to protect it. The deaths of more than 52 Palestinians this week on the Gaza border is a Sharpeville Massacre unfolding. These killings are part of an ethnic cleansing that has lasted for decades that Israel uses to secure a Jewish majority state of Israel, with Jerusalem as its planned capital. The move of the US embassy to Jerusalem has led to the deadliest attack of peaceful protesters since the Gaza War in 2014. This a turning point. South Africa’s withdrawal of the Ambassador of Israel is a sign that this is a violence that South Africa recognises and has been a harsh critic of, but South Africa cannot continue to take this position alone.

South Africans and Palestinians have had a common dream for many years and have struggled side by side against Apartheid as extensions of the same movement that is against imperialism, land occupation, and segregation.

The Palestinian Liberation Organisation (PLO) and the African National Congress (ANC) share the same enemy, which entered both South African and Palestinian history in 1948; 15 May 1948 marks a historical catastrophe that occurred at the same time as the establishment of South Africa’s Apartheid state. On 15 May each year, Nakba Day, which in Arabic is the Day of Catastrophe, is a time for mourning the loss of homes and lives during the 1947-1949 war, but also a time for collective resistance; 78% of historical Palestine was lost in the Israeli state, this loss of land and homes continues as Israel annexes more land for settlements in the occupied West Bank. The struggle for the right of return and for the end of the occupation reaches its 70th anniversary without peace in sight.

The 70th anniversary comes at an important time of reflection on South Africa’s Apartheid legacy and liberation history; this came after the passing of Mama Winnie Madikizela-Mandela.

Winnie Madikizela-Mandela passed away this year while I was on a recent visit to the occupied West Bank that coincided with the Great March of Return and the start of the six-week campaign. In Nablus, I discovered part of her legacy and her activism captured in a photograph of her with the PLO. Her spirit of resistance is celebrated and magnified by the activism of Palestinian women activists Ahed Tamimi and Leila Khaled. These women activists come from different generations, but they both continue the struggle to free Palestinians from Israel’s restrictive policies which involve checkpoints, Palestinian permits and life under Israeli martial law.

The illegal occupation of the West Bank and Gaza has created a life of imprisonment, in which political imprisonment does not see age. Conviction rates are at an unchanging 99%. Ahed Tamimi, the 17-year-old detained activist from Nabi Saleh, was arrested for slapping a soldier after the same soldiers shot her cousin Muhammad Tamimi in the head with a rubber bullet. Her resistance is celebrated by Palestinian society with the likes of Leila Khaled, a leading activist of the Popular Front for the Liberation of Palestine (PFLP), who is known for being the first woman to carry out two strategic aircraft hijacking operations in 1969 and 1970.

Like Winnie Madikizela-Mandela, Leila Khaled and Ahed Tamimi defy Israeli Apartheid with a militancy that speaks truth to power and challenges sexism and white supremacy. Ahed Tamimi, an icon for a younger generation of freedom fighters, continues the legacy of our ancestors. Palestine’s long walk to freedom needs us, the younger generation of freedom fighters in South Africa.

South Africans, young and old, need not use their imagination to understand the conditions of life under an occupation. Our history books name permits, the dompas, and the occupied Palestinian territories are a version of Bantustans created to control a majority. Israel is clearly as guilty as the South African Apartheid regime, and once again, the United States is an Israeli ally that is on the wrong side of history as it was until 1986 in South Africa, and imposed sanctions because of the influence of the anti-Apartheid movement.

The United States continues to give Israel military aid despite Israel’s human rights violations and the growing influence of the Palestinian Boycott Divestment and Sanctions movement in different parts of the world. While South Africa today is not fully liberated for all, it no longer has the choke hold of Apartheid. The negotiated settlement in South Africa and the establishment of a democratic state is often seen as the success story from which to draw inspiration. However, the South African post-Apartheid state is not a perfect model because of the current economic inequalities between the black majority and the white minority, the burning issue of land expropriation. There are lessons about decolonisation that need to be shared for the creation of better post-Apartheid futures for generations yet to come.

Nakba day should mark a turn in the anti-colonial resistance against Israeli Apartheid. South Africa’s next act of leadership and solidarity should be urgent action with its allies in BRICS and the AU. Minister of Higher Education, Naledi Pandor, in Israeli Apartheid week, urged South African youth to act and support the struggle of freedom and self-determination in Palestine. With political will and the relentless spirit of Mama Winnie Madikizela-Mandela, South Africa needs to prioritise the freedom of Palestine on the BRICS agenda in 2018. DM