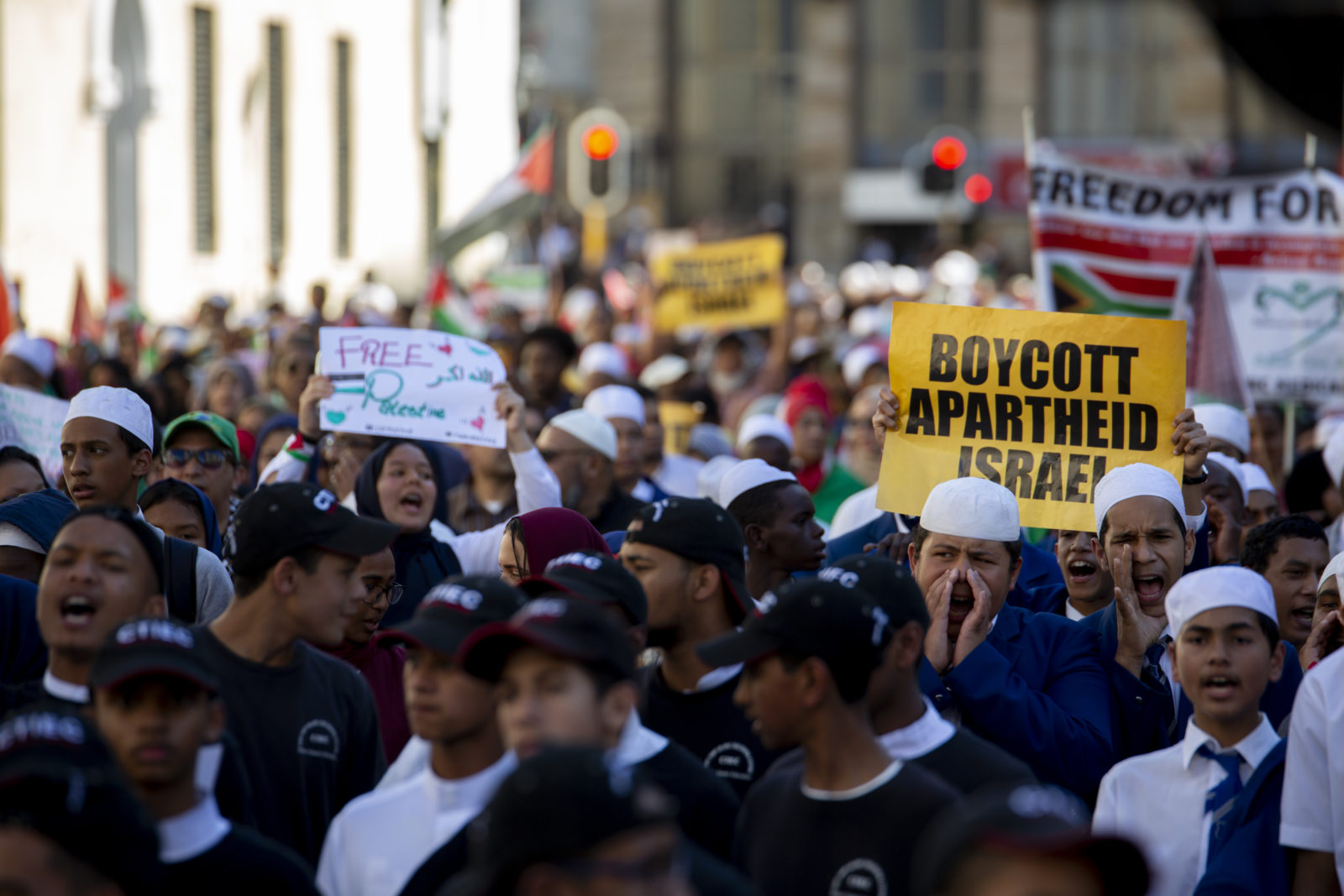 Pro-Palestinian marchers in Cape Town on Tuesday 15 May 2018 protest against the killing of over 50 Palestinians on the Gaza border by the Israeli Defence Force. Photos by Leila Dougan

Pro-Palestinian supporters gathered outside the al-Azhar Mosque in Keizersgracht this morning before marching to Parliament to protest against Israel’s aggression in Gaza, reports Aphiwe Ngalo, with photos by Leila Dougan.

Boycott, Divestment and Sanctions against Israel in South Africa (BSA), the African National Congress (ANC), al-Quds Foundation, SA Jews for a Free Palestine and the South African Communist Party (SACP) were among the groups showing solidarity with Palestine following the deaths of at least 55 Palestinians by Israeli forces on the Gaza border.

The march was arranged to take place today — 15 May 2018 — to commemorate 70 years of Nakba, or what Palestinians refer to as the Day of Catastrophe when in 1948, Israel occupied Palestinian territory.

The march took place a day after the Israeli Defence Force killed at least 55 Palestinians including six children, and injured more than 2,000 unarmed protesters on Monday.

The Palestinians were protesting against the relocation of the US Embassy from Tel Aviv to Jerusalem.

Israel said they were acting in self-defence.

Participants in the march, which was organised under the banner “Great Return March”, were due to hand over a memorandum to the government in which the groups urge the government to continue to put pressure on Israel to start peace negotiations.

The ANC parliamentary Caucus released a press statement saying that it “is deeply saddened, shocked and condemns in the strongest possible terms the callous and cold-blooded killings by the Israel armed forces of over about 50 Palestinians”.

“Long live Hamas, long live” and “Freedom for Palestine” were among the chants from the hundreds of people who made their way through the City of Cape Town to show solidarity with what Ismael Fartaar from Mitchells Plain calls “a crime against humanity”.

Referring to the decision by the South African government to recall Ambassador Sisa Ngombane with immediate effect until further notice, Fataar said: “ I feel powerless as an individual but I hope that this protest action, and the recall, will have a ripple effect in ending this.” DM