When homes are built in the dark and demolished in daylight 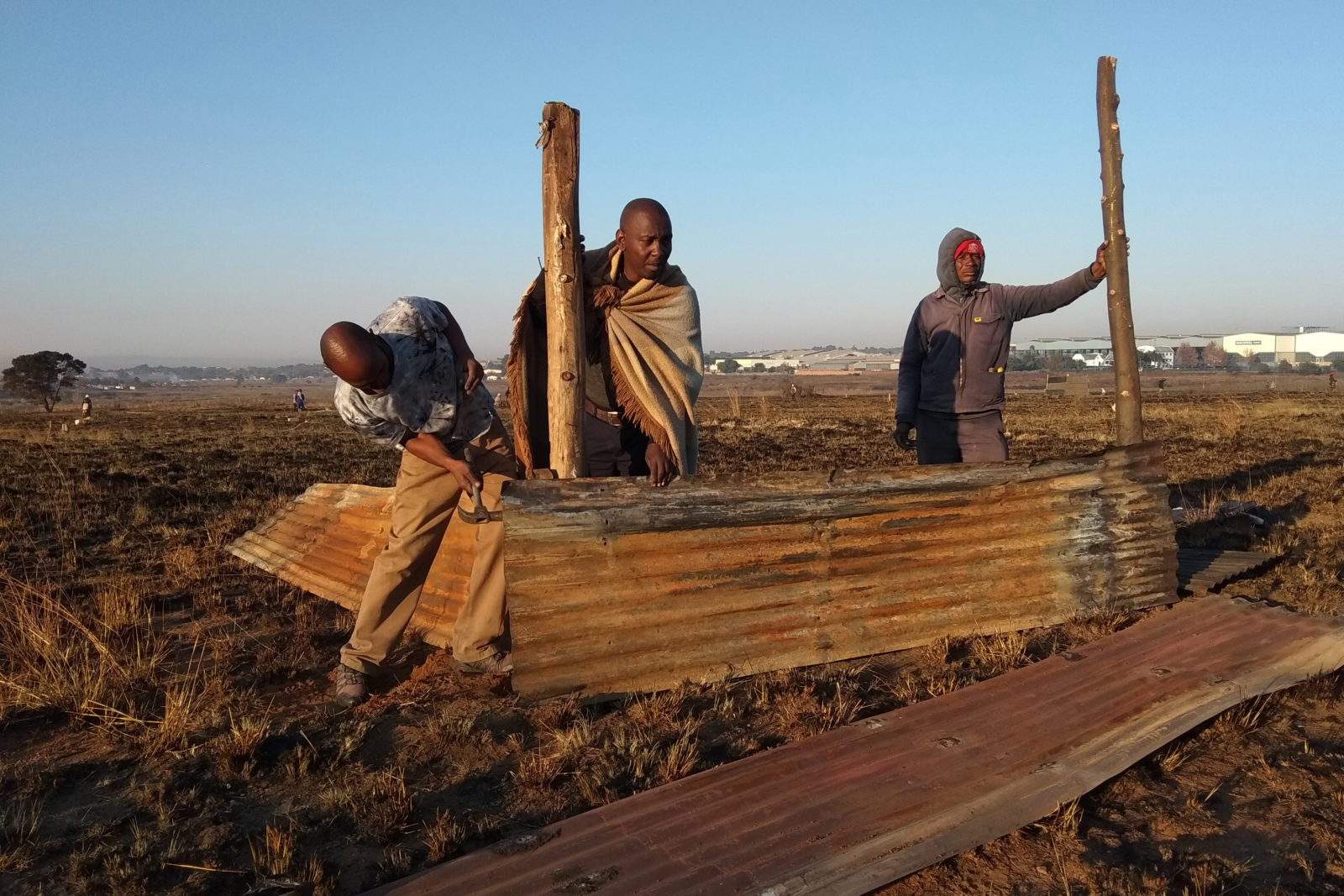 Recently burnt veld crunches under foot. Beneath the ash, green shoots are beginning to reappear. But the grass is not the only new growth.

It is early afternoon on Friday 11 May 2018. Around 30 members of Abahlali baseMjondolo’s Good Hope branch in Germiston move swiftly across a large and vacant piece of land owned by the Witwatersrand Gold Mining Trust. The land sits between Germiston and Boksburg. They are mapping out the grid of a new shack settlement. Some carry hammers, axes and tape measures.

The dull sound of metal against wood can be heard as pegs are fashioned out of branches. The pegs are used to demarcate 17m x 15m stands and the street network that will connect them. Land is also kept aside for a community hall, creche, school, clinic and churches.

The proposed name for the settlement is Zikode Extension, in honour of Abahlali president S’bu Zikode. The Good Hope branch’s general secretary, Nomnikelo Sigenu, says that 500 shacks will be built and occupied by the end of the weekend.

The shacks will be the new homes to the Abahlali members and their families who are renting rooms and backyard shacks in the densely populated Good Hope shack settlement, less than a kilometre east from here.

Mavelas Sihlongonyane, leaning against a pole while finishing a cigarette, says that R500 of his R2,500 salary goes to rent every month. He works as a merchandiser, packing the shelves of major retailers.

Thandisizwe Nkushubana, who has lived at Good Hope since 1999, pays R100 for electricity on top of the R500 he pays for rent.

“We want to live like other human beings,” he says, referring to the insecurities of his current rental arrangement. “I want to build my own home. In six months, there will be houses here!”

In the late afternoon, some Ekurhuleni Metropolitan Police Department (EMPD) vans park at the far edge of the occupation. They look on as more occupiers join in the work and Zikode Extension begins to take shape. The growing grid of stands and streets is now clearly marked out.

Work at the settlement has still not slowed by the time midnight comes around. Faces are almost indistinguishable in the dark, and specks of ash float across the light cast by the few torches bobbing over the occupation.

There are now more than 150 people gathered at Zikode Extension. Small groups continue to map out stands. Others gather around the warmth of a few burning tyres and sing songs in a low hum. Most are wrapped in blankets against the deepening cold.

Occupiers gather around Sigenu who reads their names from a list that has been prepared months in advance. After hearing their name, they join a queue, many of them with spades slung over their shoulders, and are led out into the quickly developing settlement.

Shouts of, “Three! Three!” ring through the dark. The settlement’s roads have been planned out in three-stand intervals. With each new shout, three occupiers at the head of the queue disappear in the direction of the voice to take up their stand and begin preparations to build their homes.

The night is darkest and coldest around 03:00. But the occupiers still work, kept warm by a few fires and constant movement. When the sun rises, it reveals the first three fully built homes. By 11:00, a further seven homes have been established, and the skeletal frames of many more are taking shape.

But the destruction of the first 10 homes at Zikode Extension was as swift as their establishment was tenacious.

EMPD officers, with members of the EMPD’s SWAT unit and traffic wardens from the City of Ekurhuleni’s by-law enforcement unit, many of them carrying shotguns, arrived at the occupation and began tearing the structures down. Shortly after midday, no shacks remained.

Zinc sheets that were once walls were loaded onto a truck, while the wooden frames of the shacks were thrown onto three bonfires.

Mokheseng said that the EMPD’s protocol regarding land occupations is to “engage them [the occupiers] and negotiate with them first”, as well as consulting with relevant City of Ekurhuleni departments.

“We as the law enforcers cannot just move in and start demolishing shacks deemed to be built illegally,” he said.

Sigenu, however, said that there was no engagement before the EMPD began to tear down homes.

When New Frame raised this with Mokheseng, together with the suggestion that EMPD’s visit to the occupation on the previous afternoon offered a chance to engage with the occupiers, he said that consultation was the responsibility of other departments, including Human Settlements and city planning.

According to Mokheseng, the EMPD were given instructions by the City of Ekurhuleni to “go and remove those shacks that were built there illegally”.

He said that occupiers who felt their property had been damaged when their wooden structures were burned should open a case at the nearest police station. Those who had receipts for the confiscated zinc could reclaim it from the EMPD pound.

Like a palimpsest, the work done by occupiers overnight could not be entirely erased, however. Despite the efforts of the EMPD, the grid of stands survived.

When asked what the occupiers will do next, Sigenu said:

“We will stay here. We will build again. We are going nowhere until they [the City of Ekurhuleni] speak to us.”

Siyambusa Mpolose said that his fellow occupiers are “more encouraged than before. They are starting to realise we are in a struggle.”

Mokheseng said that the EMPD will continue to monitor the occupation. DM