‘Bomb’ found at site of deadly attack in Verulam

‘Bomb’ found at site of deadly attack in Verulam 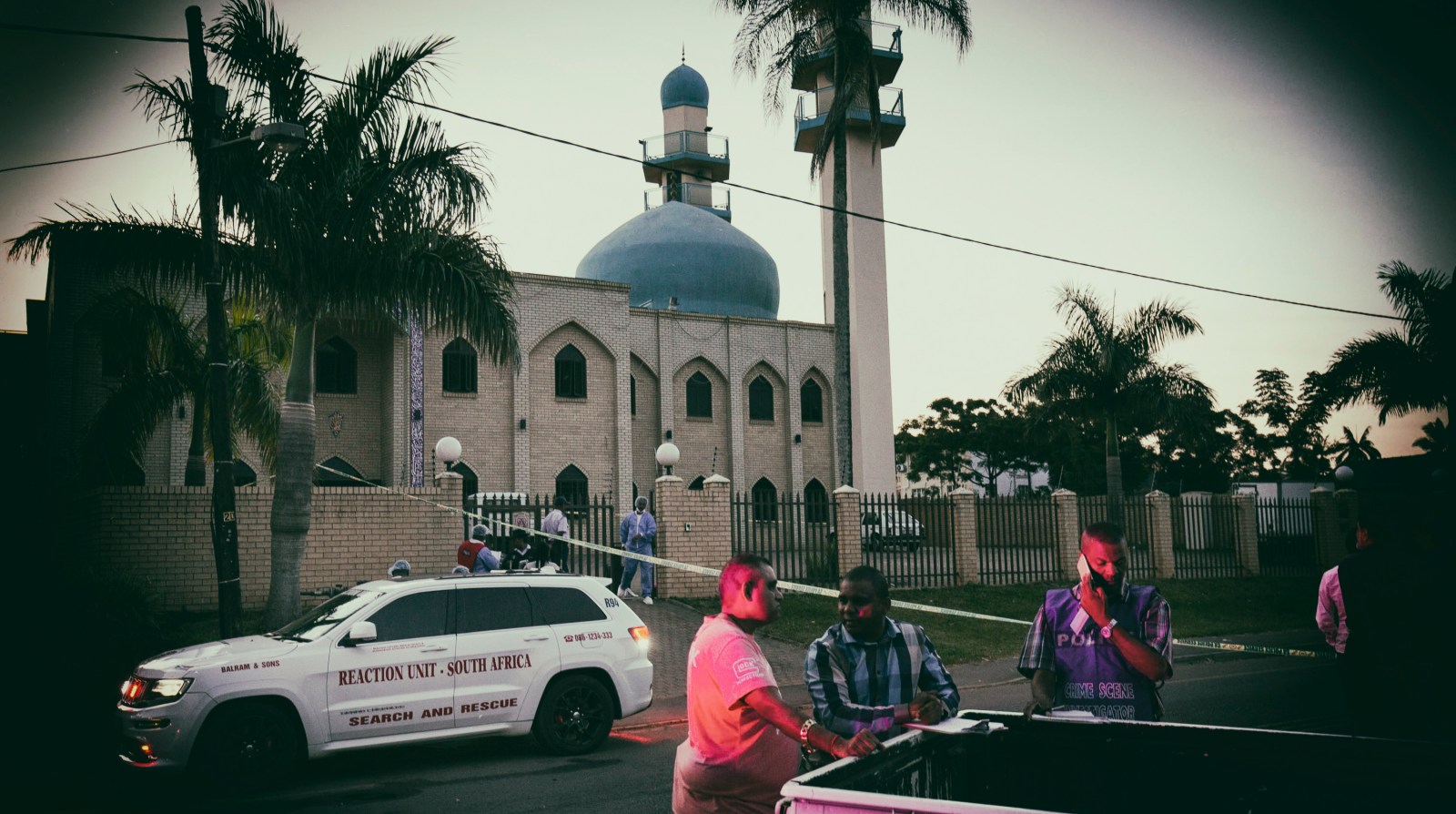 Archive Photo: Police officers stand outside the Imam Hussain Mosque where three members of the clergy where attacked with knives, hours earlier, in Durban, South Africa, 10 May 2018. EPA-EFE/STR

A device believed to be a bomb was found on Sunday night at the mosque in Verulam that was attacked last week.

Reaction Unit South Africa said it evacuated several residences in the vicinity after a device was located at the mosque in Verulam by a worshipper as people prepared for prayers. It was found under the moulana’s chair.

The device was found wrapped with a cellphone.

On Thursday, the mosque was attacked by three men. One worshipper was killed and two people — including the moulana — were stabbed.

The mosque leadership told Weekend Witness that the prayer area had been closed by police and they had hired another venue.

Before last night’s events, calls had been made not to jump to the conclusion that the mosque was targeted because worshippers there follow the minority Shia branch of Islam.

“It may be a case of money laundering or a personal issue between the perpetrators and the victims. I do not think we should jump to conclusions that this attack is motivated by sectarianism,” Haseen said.

However, others have said the attack was due to hate speech against the minority Shia Muslim community.

The assailants set part of the Imam Hussain Mosque in Ottawa, Verulam, on fire, by allegedly tossing a petrol bomb, before fleeing.

A member of the mosque’s leadership, Shanshah Ali, told The Witness at the time of the attack he feared the incident was a “terror attack” founded on clashing religious ideologies within Islam.

Muslims primarily fall under the Shia and Sunni branches of the faith. Sunnis are the vast majority and there is violent tension between the two in some parts of the world, such as Iraq.

It is believed that the attack was carried out by three men described as “Egyptian nationals” wearing half balaclavas, who managed to flee in a white Hyundai Getz with no registration plates.

The attack has sent shock waves through the local Muslim community, who condemned the incident and labelled it the worst attack on any South African mosque in history.

An article published by the Sunday Tribune on Sunday said the attack “came in the wake of hate speech against the Shia community that has continued for years, and escalated to unparalleled levels recently”.

In the article, the mosque’s chairperson Azad Seedat was quoted as saying the attackers acted on hate and were copycats of ISIS (Islamic State) and that the attackers had visited the mosque three times prior to the attack when it was quiet, prayed, and taken literature and books.

The article went on to say that the Shia mosque was the only one in KwaZulu-Natal and had been mentioned in an open letter calling for action against Shia worshippers.

The Sunday Tribune said the letter was published on the Jamiatul Ulama and other websites. Jamiatul Ulama is a council of South African Muslim theologians.

It also reported that the Imam Hussain is one of only three Shia mosques in South Africa, the others being the Ahlulbait mosque in Cape Town and another in Edenvale, Johannesburg.

Haider said in the article that the attack on the Hussain mosque was not an isolated incident but rather the result of hate speech that has been ongoing for years. — Witness reporters, News24 DM