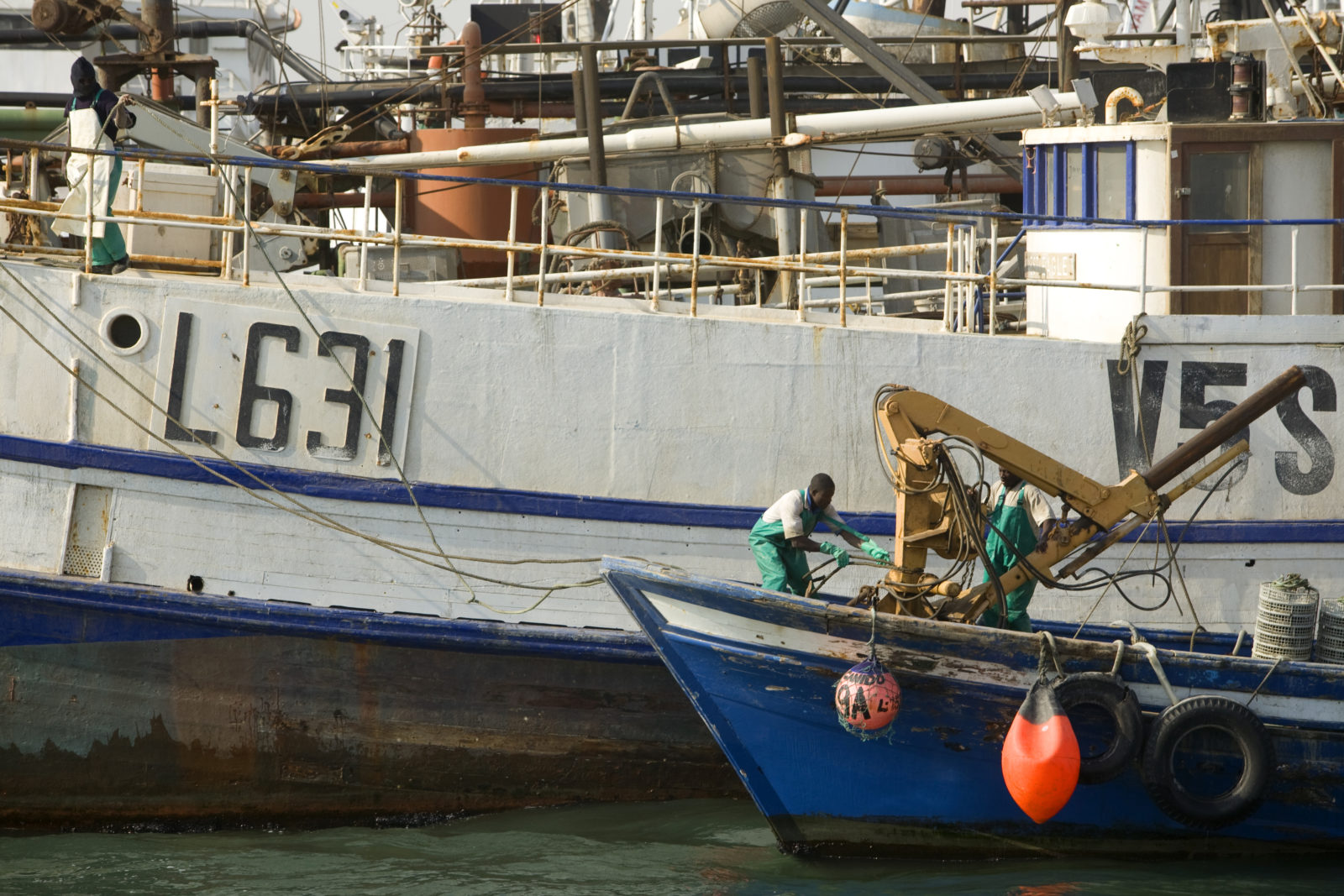 File: Walvis Bay on the Atlantic Ocean is the main port in Namibia and home to many fishing companies, fishing is one of the main contributors to the Namibian economy. Etale Fishing Company is one of many along the waters in Walvis Bay. A small fishing vessel docks at an adjacent quay. Photo: John Hogg / World Bank

The handing of a fishing quota to the benefit of a foreign company contradicts a government commitment to “Namibianise” the fishing industry, critics in Namibia say.

The deal directly contradicts a government commitment to “Namibianise” the fishing industry.

Trade ministry documents reveal that Fishcor’s new partner will assist in the establishment and operation of a N$530-million land-based fish processing plant in Walvis Bay.

The quota decision represents 16% of the total allowable horse mackerel catch, while more than 20 other local companies must scramble for the remaining allocations.

A well-placed industry source complained that at least five local companies “have the necessary expertise and financial capability” to partner with Fishcor.

Fishcor was supposedly set up to promote Namibian enterprise, while Namibia’s President, Hage Geingob, has committed the government to pushing through laws to empower Namibian businesses.

The fishing parastatal has been feather-bedded repeatedly by government over more than a decade. Questions have also been asked about why the deal was clinched without a tender.

In 2014 Namibia’s High Court ruled that an earlier allocation by Esau of 10,000 metric tonnes of horse mackerel to Fishcor was illegal, because the state-owned entity is not a horse mackerel fishing rights-holder.

Two companies, Bidvest’s Namsov Fishing Enterprise and Atlantic Harvesters of Namibia, sued the minister after their quotas were cut.

However, a subsequent amendment to the Marine Resources Act in 2015 empowered the minister to allocate quotas to Fishcor in order to “advance any social, economic, cultural or other government objective in the public interest”.

In the latest development, The Namibian newspaper has seen an agreement struck between Esau and Fishcor in 2017 in terms of which the minister promised to make available to the parastatal at least 50,000 metric tonnes of horse mackerel each year for 15 years.

Fish traders estimate that the quota is worth about N$120-million (R120-million) annually, or about N$1.8-billion in total.

The agreement, announced in a May 2017 government gazette, led to the formation of Seaflower Pelagic Processing, a joint venture between Fishcor and African Selection Fishing Namibia, which is owned by the Angolan-based African Selection Trust (AST).

African Selection, which operates a fish processing plant in Namibe, southern Angola, holds 60% of the shares, while Fishcor holds the balance.

The joint venture will be responsible for setting up a factory to process 600 tonnes of horse mackerel a day. The plant will be located on land bought by Fishcor for N$160-million from Etale Properties, a company partly owned by Namibian businessman Jose Luis Bastos.

The deal has sparked a storm of criticism in Namibia.

“It is ironic that Bidvest, a Namibian-listed company (in which many Namibian pensioners have an interest), lost quota allocations while foreign companies find it easy to obtain quotas.”

The quota system was designed to empower ordinary Namibians, but the benefits have largely accrued to well-connected individuals. Esau has often come under fire for favouring those close to him in the allocation of quotas.

The sector is also seen as dominated by a favoured clique that wins fishing rights and quotas only to flip them to Spanish, Chinese and other investors.

In 2012, Namibia’s Law Reform and Development Commission released an “Urgent and targeted Report on Fisheries” in response to a request by Esau.

The report emphasised the goal of Namibianisation in the fishing industry by asking quota applicants to prove majority Namibian shareholding and ensuring that beneficial control vests with Namibians.

An industry expert who asked to remain anonymous said Esau “is preaching Namibianisation of the fishing industry”. But as far as was known, no local company was approached to partner with Fishcor with a quota offer.

“He could have done the same joint venture deal with four or five reputable and more experienced Namibian companies and kept the business Namibian.”

The expert said “the general feeling is that Fishcor is being used as the vehicle for feeding the lavish lifestyles of some individuals”.

Esau did not respond to questions sent to him in April. Nghipunya confirmed the ownership structure of the joint venture to The Namibian but denied Esau had given the state company privileged treatment.

“The guaranteed quota is not to spoon-feed Fishcor but to ensure that government achieves its objective of sustainable job creation and value addition through … onshore processing,” he said.

Asked why a foreign company had been favoured, Nghipunya said the partner was chosen after an investigation into the establishment of a processing plant in Namibia.

He and Hatuikulipi had travelled to southern Angola in December 2016 to inspect the land-based operations of African Selection Trust and ascertain their knowledge of “land frozen pelagic processing facilities”.

Nghipunya said the Angolan company would invest N$372-million in the construction of the plant and refrigeration vessels.

“The issue of the financial contribution seems to have scared the other companies who initially shows interest, but [not] African Selection Trust.

“The construction work is progressing well and should be complete within the scheduled time, estimated to be the end of September 2018,” he said.

Asked why the project had not gone out to tender, Nghipunye said the fishing industry “is very unique in the sense that there are certain areas of operation that do not work as your ordinary tender processes. Fishcor … knows the operators who can be approached for joint venture arrangements”.

The ministry had signed a cooperation agreement mandating Fishcor to find a technical partner of repute.

“The local industry does not have the required skills and experience in operating a land-based pelagic factory with the required modern freezing technology.”

Breed refused to answer questions about the Seaflower deal in a telephone interview and later sent by SMS and WhatsApp.

Asked why Fishcor had bought land for N$160-million for the location of the factory without calling for bids, Ngiphunye said: “To the best of my knowledge companies don’t advertise … to buy properties, but rather buy properties that are adequate for their operation, meeting local requirements, and are within the budgeted price”.

He said the plant would be the largest of its type in sub-Saharan Africa, employing about 700 people.

“This project will offer a good platform for processing collaboration with other horse mackerel right holders in the industry, as our capacity can be extended to 70,000 metric tonnes per annum,” he said.

He declined to estimate the value of the quota handed to Seaflower, saying the price of fish varies from year to year.

Some critics, including former directors of now-closed Etale Fishing Company who were interviewed by The Namibian, complained that Fishcor was being favoured despite a history of failure.

The former director said that companies are still fighting to remain open, being forced to retrench workers and “staring closure in the face while business is leaving the country”. DM