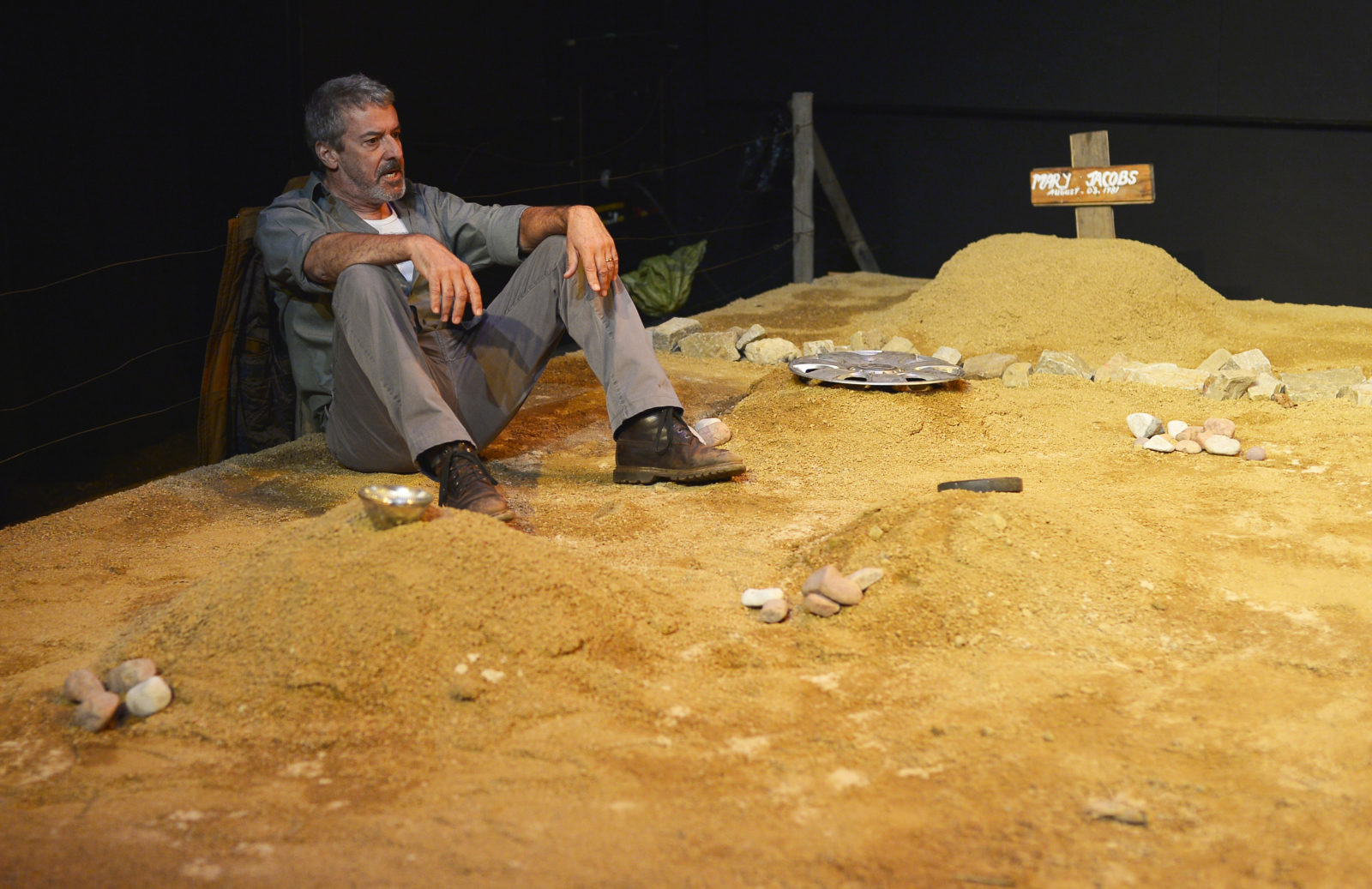 The Train Driver is a post-apartheid play by literary giant Athol Fugard, where black meets white in a time when the boundaries have supposedly changed, yet little really has.

My father was a train driver. He never spoke much about how it felt to pull out of a gentle curve onto a long straight stretch of track and see someone standing in front of him, waiting for the train to pound them into oblivion.

You couldn’t stop in time, he said. You certainly couldn’t swerve. All you could do was stare at the person about to make you kill them and scream at them to get out of the way.

I remember him telling me how he had to stop one train before it reached the next platform to remove the head of a man now macabrely perched where the headlight used to be. If that image has haunted me for years, imagine how it must have tormented my father.

Dawid Minnaar knows how it feels. He’s immersed himself into the role of Afrikaner train-driver Roelf so well that every part of him – his eyes, his fists, his words, his breathing – become the traumatised character who has killed a woman and her baby. His performance is electric.

The Train Driver is a post-apartheid play by literary giant Athol Fugard, where black meets white in a time when the boundaries have supposedly changed, yet little really has. His script is searing yet rich, with a flow of highs and lows riddled with wise insights into white thinking.

Fugard has Roelf go to a squatter camp to find the grave of the unknown woman, so he can curse her to hell for turning his own life into emotional agony. There he meets the old, quiet gravedigger Simon Hanabe, played with expert dignity by John Kani.

When Roelf arrives, he’s cursing “the blacks” for creating or tolerating such squalor around them. “These people” is a phrase that echoes around the stage, a carefully designed mess of barren soil, sad pieces of broken plastic to mark the grave – there are no flowers here – and Simon’s shack, with a candle and other bare necessities.

Gradually, Simon’s gentle empathy for the white man coupled with Roelf’s own introspection shift his thinking, until he realises the poverty and hopelessness is not of their own doing. It sounds obvious, of course, but how many people, two decades later, still linger under the belief that the squalor of the townships is self-inflicted?

Minnaar’s performance has you watching in utter silence, your eyes rivetted on a man riven by grief. It’s a very human, visceral play – when Roelf relives the terrible event, Fugard’s stinging words and Minnaar’s furious despair wrench your gut. He’s at his most magnificent when his thoughts clarify and he sees the woman’s life for what it was, and realises that he too could not have accepted those conditions.

Kani addresses the audience directly at times, like solid, dependable bookends that mark the start and finish. In the middle, he’s steadfast as a man whose hopes have come to little: a shovel, a hovel, and a constant need to be on the guard against dogs that dig up the graves and the tsotsis, the gangs, that might put him in one for a handful of cash or just for sheer devilment. Undeterred, he sings for the ghosts at night to send them back to sleep.

The play was inspired by a true event in December 2000, when Pumla Lolwana pulled her three children around her and stood in front of a train on the Cape Flats. The tragedy was first covered by Fugard in Karoo and Other Stories, and turned into this powerful play in 2009.

The intimate size of the Market Theatre’s Mannie Manim stage brings the action wonderfully close. You’re not just watching, you’re practically involved, especially if flying bits of gravel land in your lap as Minnaar wields a shovel with almighty fury. And you ought to feel involved, because this story is still so socially relevant. It’s not just about a train driver and a grave digger, it’s about us and them and overcoming the barriers between us.

Director Charmaine Weir-Smith has delivered a crackling piece of theatre, with Mannie Manim’s lighting honing the tension as it ebbs and flows from bleak daytime into threatening night. The set by Thando Lobese-Moropa is so good that you almost surrender all hope just surveying it.

In any other country the play would end five minutes before it does, but Fugard writes peculiarly South African stories, where nothing is ever entirely predictable.

He drills his messages home decisively, cleverly, unavoidably. He doesn’t take the easy track of delivering white guilt, aiming instead for awakening as he prods you into contemplating our ongoing social injustice.

But this is pure theatre, not a pulpit, and the incredibly moving script and sterling performances will leave you stunned. DM

The Market Theatre is staging two Fugard plays to celebrate the author’s 86th birthday. The Train Driver runs until June 3 and will be followed by Nongogo, set in a 1950s shebeen, from 15 June to 15 July.

What grief feels like, and how to help those going through it