What is happening to our once-proud free press? 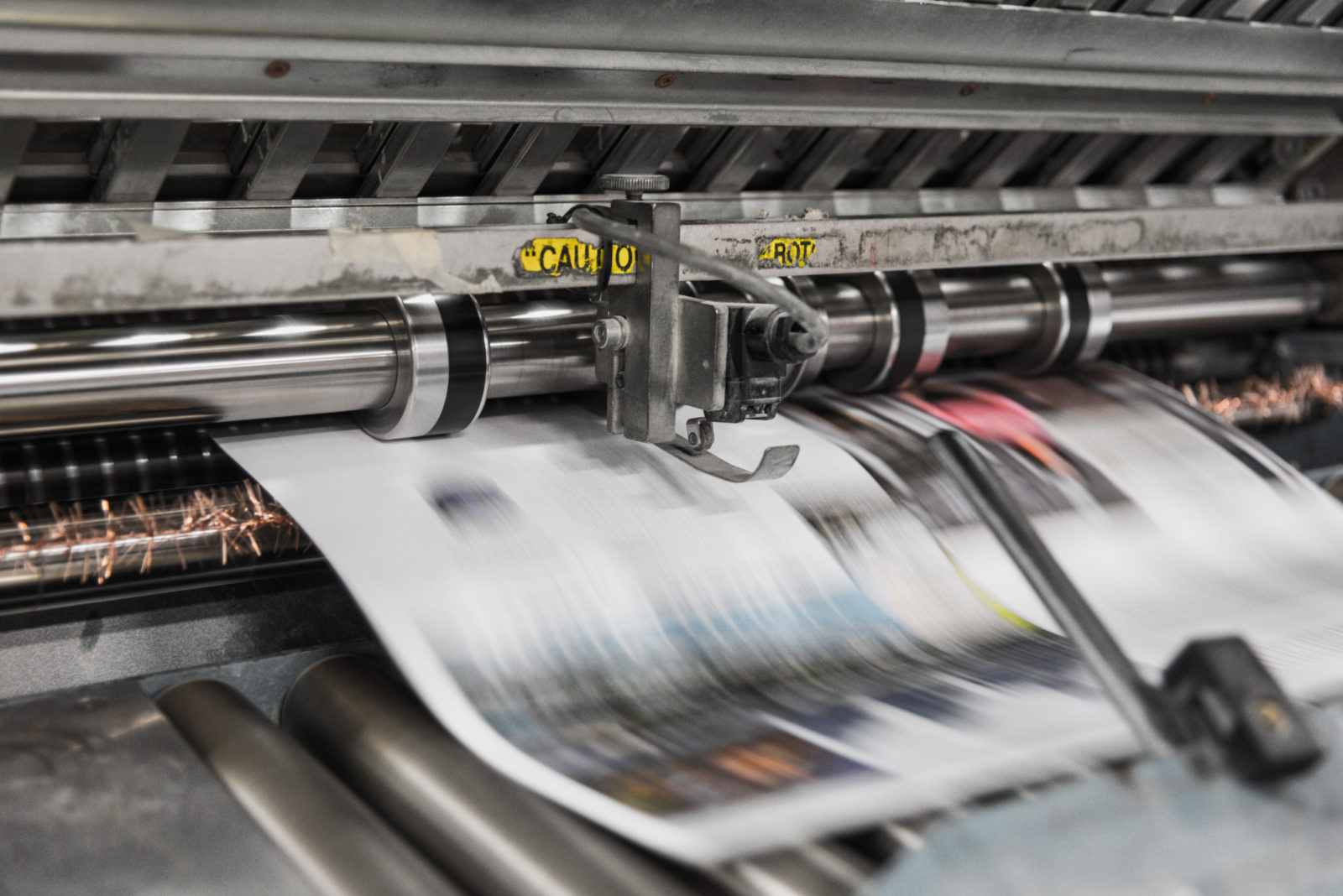 Photo by Bank Phrom on Unsplash

Within the next year we will go to the polls to vote in a crucial election. Everything needs to be in place to ensure that this takes place as freely and fairly as possible, and this includes an ethical press reporting in a balanced and impartial manner. But right now the state of our press is a cause for major concern.

Last Thursday we celebrated World Press Freedom Day. Across the globe, people reflected on the crucial role a free and courageous press has played in safeguarding open, democratic societies. The day was spent highlighting the plight of journalists trying to do their jobs in repressive, authoritarian countries, many of whom are languishing in prison for daring to write truthfully about tyranny and corruption. Heartfelt tribute was paid to the hundreds of journalists killed on duty in recent years around the world.

Here in South Africa we have particular cause to celebrate a free press. Although they don’t get anywhere near their due share of the credit, much of our country’s victory against an unjust and racist regime is down to the men and women who exposed this regime. Few countries have seen such an extensive and sustained war on journalism as we have, and particularly in the last decade of the apartheid government. Draconian censorship laws, threats of closure and physical intimidation combined to make telling the truth near impossible for journalists and editors. Yet they did, and apartheid fell.

But when I say “we” celebrated World Press Freedom Day, I really mean a tiny handful of journalists, editors and related media types. Most South Africans didn’t know about it, and probably wouldn’t care all that much even if they did. Because a free press is something you rarely think about until it’s no longer there. And then you think about it all the time.

A free press also only remains free as long as it is protected from abuse, whether this is the physical kind as witnessed in countries like Turkey, China and Egypt, or the more insidious kind of abuse brought about by agenda-driven reporting. If you take your eye off the ball – if you start taking your independent press for granted – then it is the latter kind of abuse that seeps in through media ownership, funding and appointments, and ultimately destroys the notion of press freedom in a country. This is what is currently happening in South Africa, and it is a threat far greater than many care to acknowledge.

Much has been said recently about the fall of the Independent Media Group. If anyone still had doubts about the suitability of Iqbal Survé and his Sekunjalo Investment Holdings to run a newspaper stable the size and importance of Independent, then he has surely put those doubts to bed through his desperate efforts to defend the thoroughly discredited Sagarmatha Technologies across all his titles. Naming and shaming honourable journalists – likening them to apartheid Stratcom agents – simply because they dared to expose a scam public listing dishonestly propped up by state employee pension funds is a new low, even for Survé.

While most people ridiculed Survé and rolled their eyes at his transparent propaganda, what he has done to newspapers like The Cape Times, The Argus, The Star, Pretoria News and The Mercury deserves far greater condemnation. Between them, these papers have centuries of history and experience. They helped free our nation and usher in democracy; they shaped who we are. We’re not talking about some fly-by-night Gupta media organisation left to crash and burn after the looting’s done and the bosses have fled. We’re talking about the destruction of national treasures.

And it’s not only Survé’s Independent and Jimmy Manyi’s rebranded Gupta media that are eroding our free press. We’re seeing a steady slide in standards of reporting throughout many of our news titles. The “planted” stories have been racking up at Sunday Times in recent years, and even the once-trusted Mail & Guardian has been dropping the ball too often lately to be simply dismissed as the odd mistake.

A golden thread running through many of these “lapses” is an apparent eagerness to knock the DA, its leader, Mmusi Maimane, or anyone vaguely connected to the party. A cursory glance at the Twitter accounts of many editors and senior journalists quickly confirms that this is no accidental bias at play. The personal attacks in their tweets are often mirrored in the editorial content. It would be extremely naïve to pretend there is no social credibility to be had from deriding the party and creating some kind of moral equivalence between small DA infractions and the wholesale looting and mismanagement of the country by the ANC. Not to even mention the astonishing free ride the EFF is given in the press.

And then, of course, there is the issue of competence and capacity. As it becomes harder to run a profitable news title in this age of digital saturation, and as the demands for content increase, newsrooms have become stretched to breaking point. Increasingly junior staff are given more and more work and responsibilities. Inevitably, mistakes creep in and standards plummet.

This triple whammy of political influence, personal ideology and declining capacity has left our media space teetering on the brink. Once-trusted sources of news have to be fact-checked against each other simply to get a semblance of the truth. Trust and credibility now rest with individual journalists instead of the news brands they represent. Apologies and retractions have become commonplace and completely meaningless. It has become near impossible to distinguish political agenda from incompetence.

Driving into Cape Town the other day, I noticed the Cape Times headline on every third or fourth lamp post: “Maimane declares: I’m a mini Mandela”. This immediately struck me as odd, because I know Mmusi and he is not vainglorious. Perhaps a journalist had genuinely misunderstood him, I thought. So I did a search on Google and Twitter to find out exactly what he had said, and it confirmed all my suspicions. This was a completely fake faux pas.

Maimane had lamented the truly bizarre use of Mandela’s name as a pejorative insult by some South Africans who now consider Madiba a “sellout”. He was denouncing the abandonment of Mandela’s values in contemporary political debate, which is increasingly fuelled by vengeance, hate and division, rather than unity and reconciliation. In doing so, Maimane remarked that people have even started calling him a “mini Mandela sellout” on social media as an insult. His point was clearly not one of boastful self-aggrandisement, but of dismay at how easily people are prepared to tarnish the name of someone as honourable as Mandela, to the point that his name is being used as a derogatory epithet.

But you wouldn’t know this from the news reports. Every single headline carried the same contorted version: Maimane claims he’s the new Mandela. If one publication or station got it wrong, you could perhaps understand this. But if they all got it wrong in the same way, it can only mean they’re all using a misleading report as their source. And indeed, on checking, that is exactly what happened.

The SABC ran a news report on 27 April in which Maimane was shown, in a very brief clip, as saying: “People phone me. They are on Twitter. They are on Facebook. They say ‘Mmusi Maimane you are a mini-Mandela! You are a sellout of our people!’” 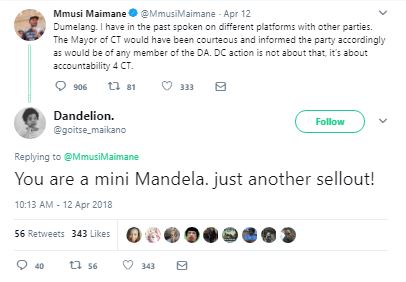 In its report on Maimane’s remarks, however, EWN excised the last sentence, thus completely changing its meaning. The following day the EFF activist Tumi Sole tweeted an eight-second version of the SABC clip cutting Maimane off mid-sentence (before he adds “You are a sell-out of our people!”). This tweet (not the original SABC report, which was accessible online) was then embedded by News24 in their report on the social-media reaction to the controversy published on 30 April.

All of the journalists, senior editors and publications who jumped onto this story relied on these initial distorted reports. No one checked back to source. Their glee at the chance to hang Maimane out to dry trumped just about every journalistic rule. Not only was the story false, it seems to have been deliberately falsified.

This is not a lone example either. The Mail & Guardian’s scathing “hanging judge” obituary of Judge Ramon Leon – who happened to be Tony Leon’s father – was also lifted straight from deliberate Twitter propaganda. Even the initial correction was lifted from more fake reporting. It took three attempts and two fumbling apologies to get it vaguely right. If there’s a chance to tarnish the name of the DA or anyone associated with it, then it seems proper journalistic practice can wait.

A couple of weeks before that, we had to read in The Star about Mayor Herman Mashaba’s administration’s massive R3-billion irregular expenditure nightmare. It didn’t take long for people to point out that two-thirds of this amount, according to the Auditor General report quoted in the piece, was in fact racked up by the outgoing ANC government in Johannesburg and not by Mashaba’s administration. But by then the damage was done. Again, the haste in damning the DA meant that normal, ethical journalism went out the window.

All of this paints a pretty bleak picture of our media landscape. Within the next year we will go to the polls to vote in a crucial election. Everything needs to be in place to ensure that this takes place as freely and fairly as possible, and this includes an ethical press reporting in a balanced and impartial manner. But right now the state of our press is a cause for major concern.

We dare not be the frogs in the pot of slowly-heating water. We dare not wake up one day with our once-proud free press in ruins and wonder how this came to be. It’s happening now. We have already lost more than we can afford. We dare not give up another inch. DM

Geordin Hill-Lewis MP is Chief of Staff in the DA Leader’s Office.