No monkeying about – we have to share with our creature cousins 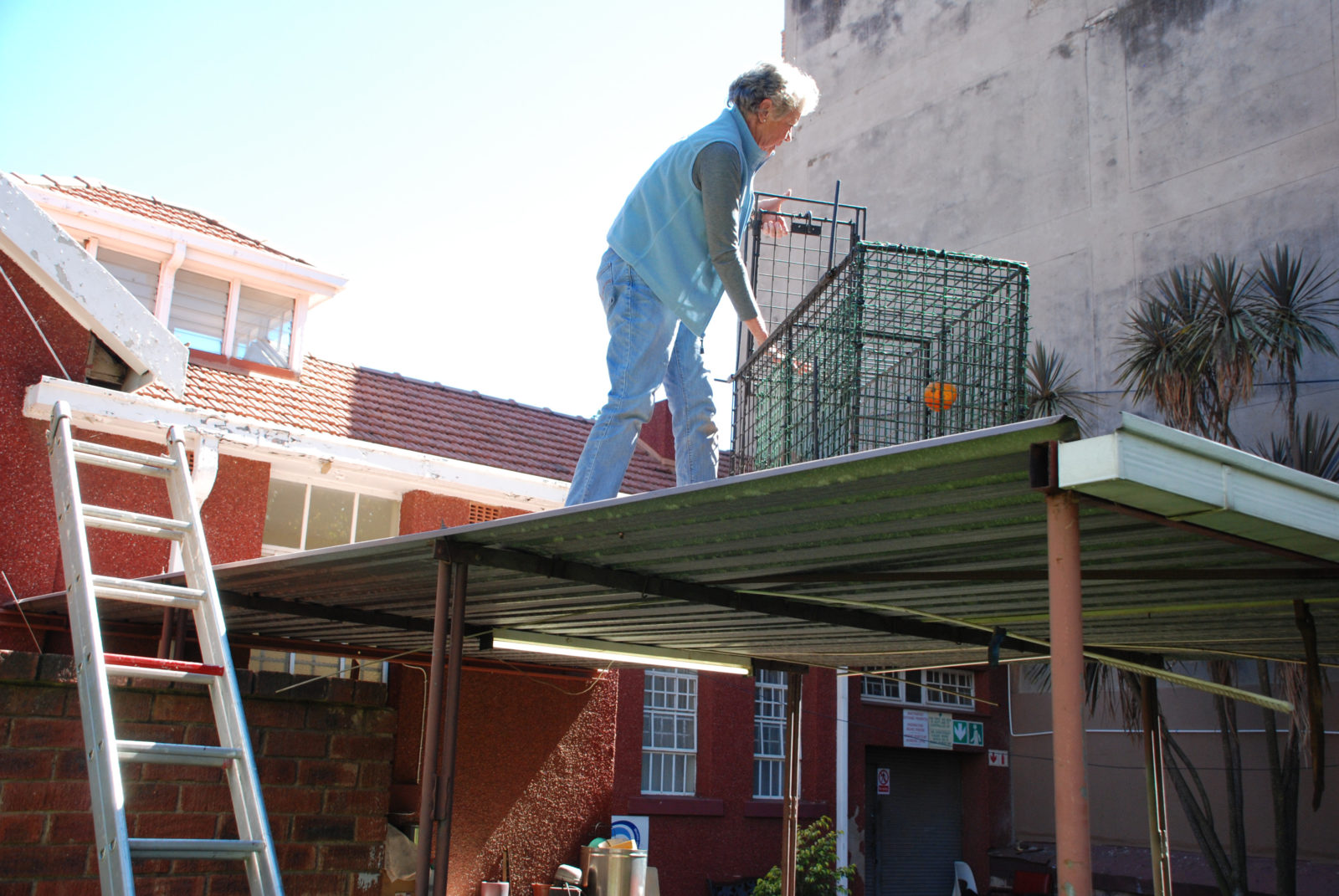 Cora Bailey, founder of CLAW, sets up a trap for a vervet monkey in the gardens of an old age home in Yeoville. Photo: Ufrieda Ho

Monkeys in old age homes, mongooses on mine dumps and genets at the bottom of the garden – our cities have gone wild and new rules of engagement apply.

Another morning, another round of neighbourhood WhatsApp group messages: gripes about water interruptions and warnings of phony officials doing the rounds. Then, a message out of the ordinary: a monkey spotted at a local school.

This was a wild vervet at Jeppe Boys’ High School’s sports grounds on an ordinary autumn Thursday, in Kensington – about as Joburg suburbia as it gets.

Messages of disbelief followed messages of more sightings as the monkey was clearly on the move. The young adult male, believed to be looking for a new troop, had been spotted near OR Tambo Airport days before and was moving west in the direction of the city centre.

Such sightings are becoming less outlandish; commonplace even. Urban contested space is increasingly not just about balancing competing human needs, but also about managing growing intersection points between city dwellers and wildlife.

Professor Justin O’ Riain is director of UCT’s Institute for Communities and Wildlife South Africa. He says it’s been “a collision course in the making for years”. Better solutions, he says, will come only when there’s an acceptance that urban living has turned a corner with the arrival of feral interlopers. This new status quo demands transformation of town planning and the mandatory environmental checklists that are still leaned on to regulate urban development.

“City development is sprawling instead of focusing on vertical growth. It means there are fewer spaces for animal to live naturally and many animals are recolonising in the urban spaces that we’ve altered,” he says.

O’ Riain says successful “recolonisers” in Gauteng are animals that are small or mid-sized. They have a broad diet and are good climbers. It’s the likes of the vervet, baboons, caracal, genet, bush babies and mongoose. Also increasingly common are a wider range of bird species from owls to parakeets and also snakes and the ubiquitous rats. They find food and agreeable habitats in maturing gardens, garbage piles and even scavenge from dog bowls.

It’s not the romanticised idea that wildlife is winning back cities or that urban jungles accommodate wildness. In fact O’ Riain says these encounters “often end in tears” – like when a caracal takes out a pet bunny or baboons leave tipped bins on pavement lawns. He point out that it’s not a case of ecosystems becoming integrated into cityscapes, rather it’s a growing presence of displaced animals forced into cities because of habitat loss and the impacts of global warming. When these animals start to be viewed as pests, threats or even omens of superstition they end up poisoned, stoned, burnt or shot.

Dr Nicholas King, an independent environmental futurist who previously worked for the Endangered Wildlife Trust and Global Biodiversity Information Facility, agrees that it’s urban humans who have to be proactive about minimising human-wildlife conflict.

“It calls for a mind shift change,” he says. Traditional tools like environmental impact assessments (EIAs) meant to rein in development are outdated. He adds: “When EIAs were introduced 40 or 50 years ago they were applicable to a world that was not as populated or as urban as it is now.”

King, who lectures to town planning students, says his message to them is about building self-sufficient cities that are resilient in an era of climate change. This he says must extend beyond energy, food and water security it has to factor in preventative measures humans can take and planning that makes provision for the likes of green corridors and city-based protected reserves.

In Wyoming, USA a successful pronghorn and mule deer migration corridor was created in 2008 by building underpasses beneath a highway. Kenya’s first national park is just seven kilometres from the centre of the capital city and in Nottinghamshire there’s a volunteer toad patrol of people monitoring toad migrations to ensure their safe passage across a network of roads.

King says decision makers also need to reframe their approval criteria for developments of the next mall, the next golf course or the next mining operation that wipes out green space and local ecosystems. He advocates ditching the environmental impact assessment model for a model that evaluates the environmental contribution of a new development or operation instead.

King is also critical of that old way of putting the onus on citizens to monitor newspaper ads or to attend a public meeting to object to environmentally dubious developments. Such “due process” needs a modern overhaul, he says.

Change, though, cannot come fast enough for the likes of CLAW (Community Led Animal Welfare). The not for profit organisation cares mostly for domesticated animals in some of the impoverished areas in Joburg. Last year alone though they responded to 66 cases of monkey and baboon rescues throughout the city.

The case load for this year is already rising, including being called out to trap the vervet spotted at Jeppe Boys High. Three weeks after he first came onto CLAW’s radar the monkey continues to elude the team. He was last spotted in the gardens of an old aged home in Yeoville.

Cora Bailey, the founder of CLAW, has spent hours setting up traps for this monkey. She also trawls through Yeoville speaking to nuns at a church, men downing quarts in taverns and children playing on the streets. She passes on correct information, explains over and over that such wild animals are not lost pets or escapees and that urban wildlife also deserves humane treatment. It spreads the network of on-the-ground spotters – it’s also the best guarantee of keeping the monkey from being killed.

“We need more awareness and education so people know not to scare or chase the animals or to try to catch them themselves. They should call CLAW or the SPCA so the animal can be removed safely and nobody gets hurt,” she says.

CLAW as well as the Johannesburg Wildlife Vet, a not for profit vet practice that rehabilitates and releases urban wildlife, note that many of the animals they rescue carry injuries. The injuries are caused by city death-traps, the likes of electric fences, car crashes, poisoning and dogs.

Bailey says there’s little protection or a long-term plan for wild animals caught in the cities. There are also few consequences for people who deliberately harm or kill wildlife that crosses their paths.

“Every year we receive more calls to help with wildlife rescues in the suburbs, townships and informal settlements because there are not enough organisations that have the traps or the know-how,” Bailey says of the inadequate response plan to remove and release animals before human-wildlife conflicts erupt.

Gauteng is not unique in the recolonising phenomenon though. Wildlife menageries are prominent in cities around the world, in step with rapid urbanisation trends. In Cape Town sharks lurk among bathers, otter live under people’s home and baboons and squirrels are well-entrenched locals. In parts of greater London there are foxes and deer. In cities in North America there are coyote, possums, raccoons and even bears. In Rome there are wild boars, and earlier this year a hospital in Hwange, Zimbabwe became a no-entry zone after a crocodile blocked the entrance for days.

Cities are the crush of us – by 2050 the United Nations says another 2.5-billion people will join the urban head count. We’ll have to learn to share with each other and with our creature cousins too. DM