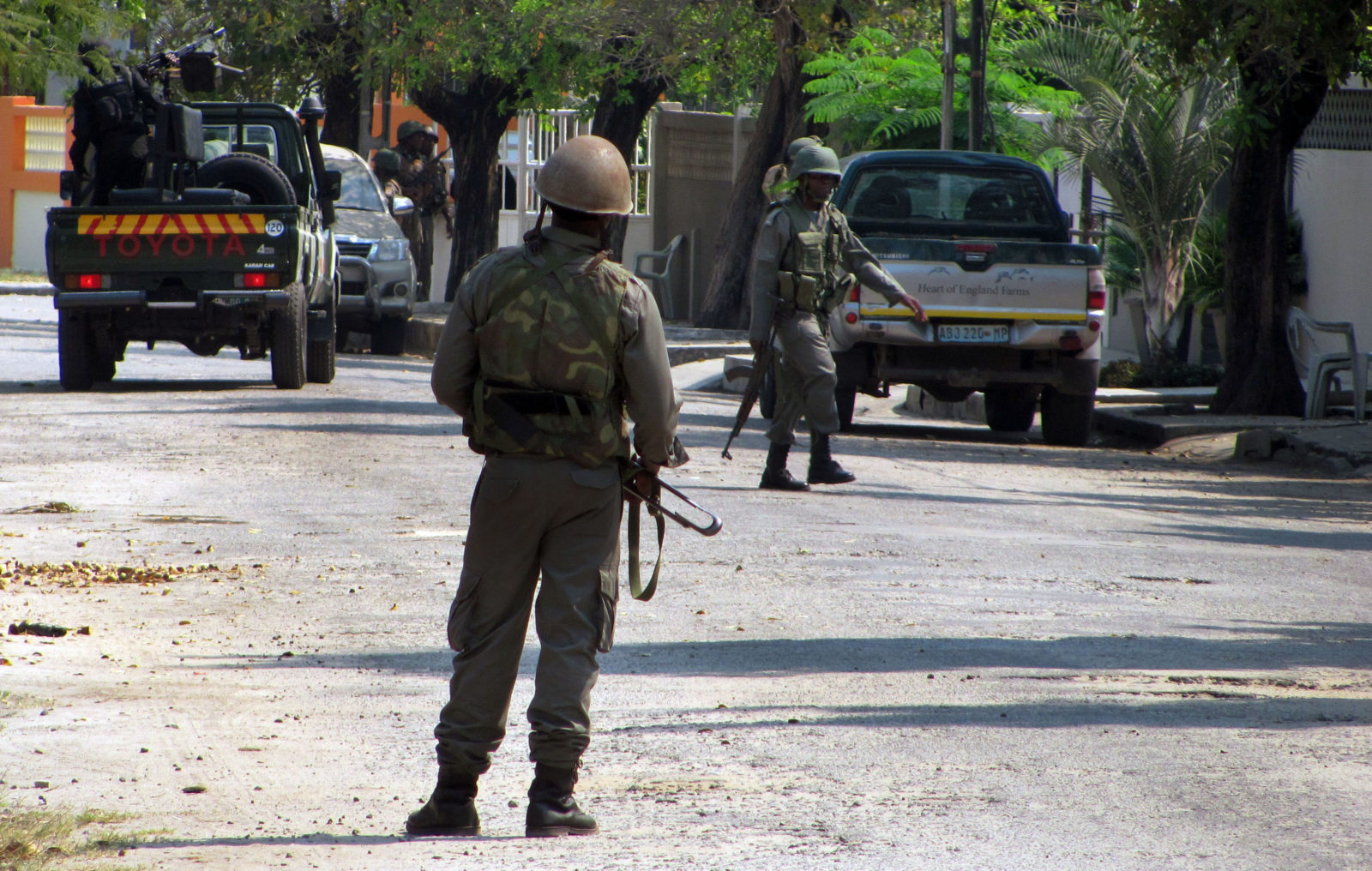 Mozambican forces of the Rapid Intervention Unit (UIR) and the Special Operating Group (GOE) secure a street during the arrest of guards of the oppositional Mozambican National Resistance (Renamo) party within a raid of the home of Renamo president Afonso Dhlakama, in Beira, central Mozambique, 09 October 2015. EPA/ANDRE CATUEIRA

The military wing of Mozambique chief opposition movement Renamo has seized control of the party after the sudden death of long-time leader Afonso Dhlakama, raising fears of a return to wider warfare.

Afonso Dhlakama, 65, died, apparently of kidney failure caused by untreated diabetes, alone with a handful of soldiers of his presidential guard unit in his Gorongosa mountain hideout in central Mozambique on Thursday 3 May 2018 around 07:30, according to sources. Telephonic contact with him had broken off early on Tuesday.

The Secretary of the Renamo Defence Department, the de facto chief of staff General Ossufo Momade, was unexpectedly appointed interim president on Saturday by the party’s national council. He immediately threatened to resume civil war and cancel the 2015 ceasefire agreement unless Mozambican President Filipe Nyusi immediately and unconditionally implemented the decentralisation and demilitarisation agreements which Dhlakama and Nyusi had been close to finalising.

These tentative agreements, the fruit of long, direct negotiations between Nyusi and Dhlakama, would, if finalised, transfer to Renamo the governorships in those provinces in central Mozambique where it commands majority support and also demobilise Renamo rebel soldiers and re-integrate them into the regular army.

Momada conveyed this ultimatum through Swiss Ambassador Mirko Manzoni who has become Renamo’s interlocutor with the government, according to Professor Andre Thomashausen, an expert on Renamo and former adviser to Dhlakama.

He said on Saturday that Momada’s election meant that “it’s a military takeover by the military of Renamo”. According to Renamo’s constitution, the party’s secretary-general, Manuel Bissopo, should have taken over as interim president, pending a decision on a permanent new president by a full congress of the party.

Thomashausen, former professor of constitutional and international law at Unisa, said the Renamo military “have been weary of Dhlakama’s love for peace during the last two years and Dhlakama once publicly lamented that ‘the generals’ were threatening him”.

However, if Renamo does not revert to warfare, it could do well politically, some believe. Thomashausen said the party could do well in the October general municipal elections, “benefiting from an increased perception that they and Dhlakama were the victims of a national and even international conspiracy to keep the corrupt and evil Frelimo predators in power”.

Thomashausen said Renamo would get a large boost from the huge secret loans scandal which rocked the government in 2016. Around two billion dollars of secret loans from Credit Suisse bank and Russia’s VTB bank to state-owned companies and agencies, supposedly to finance a tuna fishing industry, still remain unaccounted for.

Thomashausen said the public at large blamed the scandal on the government “and the greedy West and their ruthless capitalist practices”.

“The schizophrenic rejection and vilification of Renamo by all the Western powers for the past 50 or so years will end up increasing Renamo’s pull with the Mozambican voters,” he added.

Other analysts have suggested though that the second opposition party, the MDM, could be the big winner in the elections if Renamo’s succession battle turns ugly or if the party goes off in a military direction.

Momade’s election as interim leader on Saturday reinforces those concerns.

“There is a small risk that anger will boil over and we will see a sharp rise in spontaneous local uprisings and killings targeting public officials randomly,” Thomashausen said.

Dhlakama’s private memorial service in Beira on 9 May and his burial in the family village of Mangunde in the interior the next day were sure to be very emotional occasions “that will fuel feelings of hate and revenge”, Thomashausen said.

He said Nyusi  had publicly stated that he knew for a week that Dhlakama was seriously ill and that he had tried to evacuate him, but was simply unable to do so in time.

Yet Nyusi had three new helicopters, one new Challenger Jet and a Falcon executive jet at his disposal around the clock.

“The helicopter that eventually landed at Dhlakama’s hide-out on Thursday around 9.30am was privately hired by Swiss Ambassador Manzoni and was in any event too small to have carried out an evacuation, should Dhlakama still have been found alive,” he added.

Thomashausen also raised the possibility that significant numbers of the younger Renamo fighters might join new Islamic fundamentalist warriors who had recently carried out attacks in the far north of the country.

The US embassy in Maputo said in a statement on Friday that “even in his last days, Mr Dhlakama worked assiduously to advance the twin goals of decentralisation and demilitarisation, which will serve as the pillars of a durable peace deal between his party and the government of the republic of Mozambique.

“In the aftermath of Mr Dhlakama’s untimely death, we encourage the leaders of Renamo and their partners in the government of the republic of Mozambique to honour Mr Dhlakama’s legacy by finishing this grand project to which he devoted the last years of his life: a nation free from the fetters of war and violence, a nation that can harness the power of its resources and unleash the potential of its people, and a nation firmly rooted in the principles of democracy. This peace agreement should be Mr Dhlakama’s inheritance to the people of Mozambique, and the United States stands ready to help achieve it.”

Political commentator Fernando Lima, president of the media group Mediacoop, said Dhlakama’s death presented an opportunity for Renamo to redefine itself and decide whether it wanted to be a democratic party, or to be led by a strongman and to become Mozambique’s “first truly democratic party, because all others are dominated by authoritarianism”.

He told the news agency Lusa that Renamo now bore the main responsibility of avoiding a Mozambican future of winners and losers.

Despite these challenges, Lima thought Renamo was unlikely to disappear, since “it is a very big party and with great popular support”, although Dhlakama was “the great mobiliser”. DM