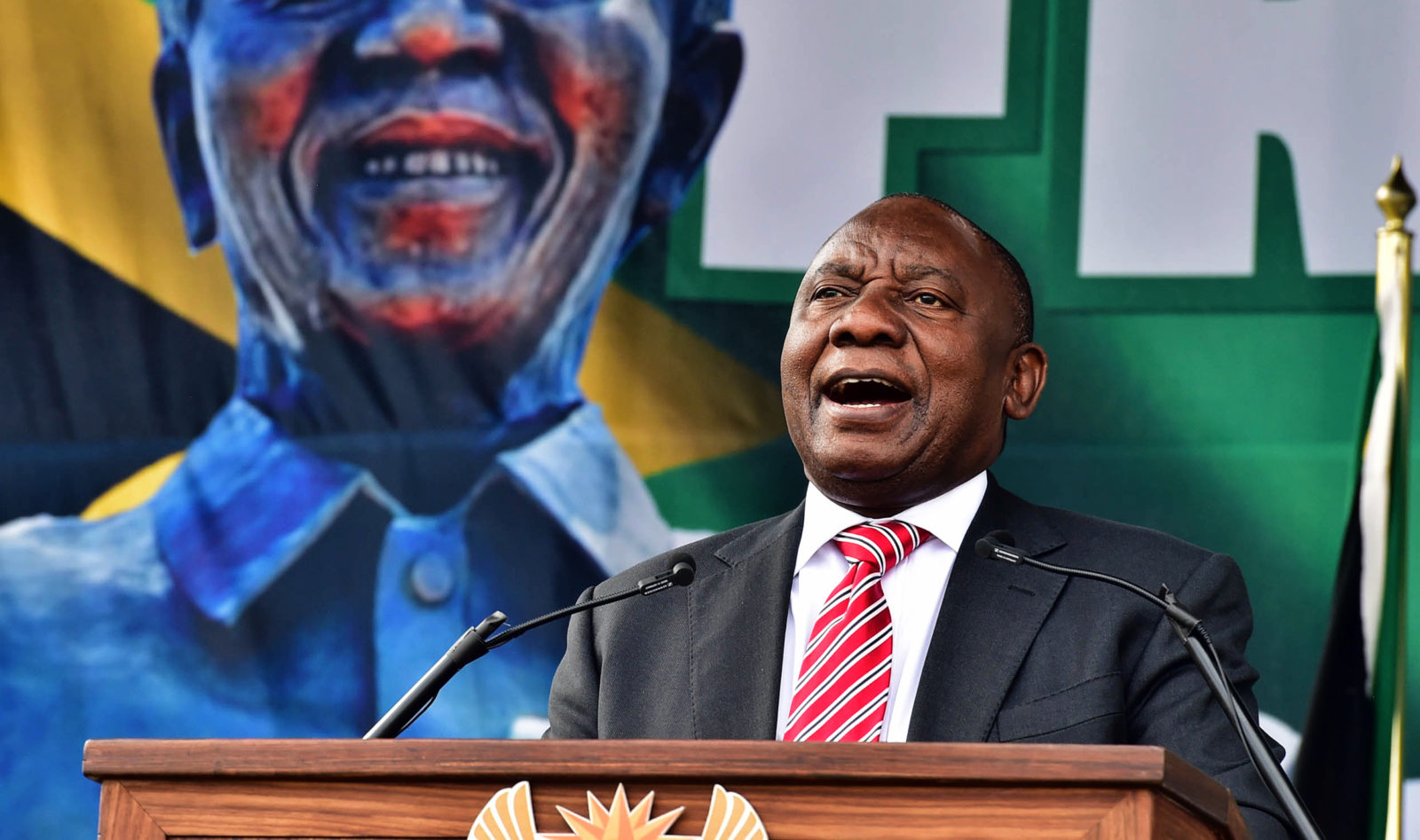 It appears from recent editions of Daily Maverick that Richard Poplak, a.k.a. TRAINSPOTTER, is a “glass half empty” man, while his colleague Stephen Grootes is of the decidedly “glass half full” persuasion, when it comes to the analysis of, and prognostications on, the future trajectory of the Ramaphosa presidency.

A closer look at the glass may well reveal that it is not anywhere near half of anything at this stage. The premature, but generally welcome, end of the Zuma era occurred as recently as St Valentine’s Day. The chances are that the Ramaphosa presidency will last anything between two and 12 years, assuming that the country remains on the constitutional trajectory it has been on for the last 24 years. Whatever transpires, it is still early days.

Regardless of the changes in personnel in the West Wing of the Union Buildings, the fundamental problems of the state are the same: poverty, inequality and unemployment remain the three ugly sisters they were before Zuma resigned. They continue to stalk the land and to threaten the success of its constitutional dispensation. Structural reform is required to address these conundrums; more “talk-shops”, as welcome as they may be, have the effect of kicking the can further down the road without the concomitant actions that are actually required to alleviate poverty sustainably, to promote the achievement of equality equitably and to create decent jobs fairly ever taking place. Addressing the provision of quality basic education, the adequacy of housing with sanitation and the architecture of the labour dispensation in a constitutionally compliant manner would be a good start.

“Concomitant” is a word that is going to be used to haunt Ramaphosa in the forthcoming general election campaign. Back in 2012 he asked then deputy minister of police, Susan Shabangu, for “concomitant action” against the striking Marikana mineworkers who had resorted to violence, murder and mayhem in support of their demands for a wage of R12,500 per month. While the Farlam commission of inquiry exonerated Ramaphosa of all blame for his use of a fancy word that means “naturally accompanying or associated”, the deaths of the miners at the hands of the police deployed to end the violence accompanying the strike are, and will be, fertile soil for the campaigning worker parties who have indicated they will contest the election due in 2019.

A feature of the rise to the presidency of Ramaphosa, that neither Poplak nor Grootes comment on, is that those who proposed and seconded him in the National Assembly were careful to stress his revolutionary credentials when they put his name forward for the job. Ramaphosa himself has made no bones about his fealty to the revolutionary agenda.

After former president FW de Klerk complained in 2014 that he did not “sign up for the national democratic revolution” Ramaphosa stoutly defended the revolutionary content of the new constitutional dispensation. The fundamental objective of the national democratic revolution is to secure hegemonic control of all of the levers of power in society. This goes way beyond control of the state, the legislatures, the executive sphere and the courts. It involves deployment of revolutionary cadres in Chapter Nine institutions, in the public administration (illegally and unconstitutionally so) in the state-owned enterprises (witness the game of musical chairs played by Brian Molefe) in the private sector and indeed wherever power is exercised, especially so in the media.

The difficulty facing any president, including Ramaphosa, who bows before the revolutionary agenda is that the Constitution requires that the state respect, protect, promote and fulfil the many and varied rights guaranteed to all in the Bill of Rights. Striving for hegemony and at the same time administering a multiparty democracy under the rule of law that honours inherent human dignity, the achievement of equality and the enjoyment of freedom (of the kind set out painstakingly in the Constitution) are mutually contradictory pursuits. A free media and an independent judiciary are “counter-revolutionary” and a buoyantly thriving private sector is not accommodated where hegemony reigns.

It is too early to tell whether the Ramaphosa posturing in favour of the national democratic revolution is part of what Professor Roger Southall calls “the theatre of the ANC” or a genuinely held belief that the socialist nirvana that the revolution strives for is actually his goal. This will play out in myriad ways in the months and year or years ahead.

The Constitution is either our supreme law, or it is a mere beach head on the road to the revolution achieving its goals, it cannot be both. The parties of the left have long since given up on the genuineness of the ANC revolutionary agenda. They take the view that the ANC has sold out to the capitalist forces present within its ranks (is Ramaphosa himself not a fine example of capitalism and empowerment in action?) and they campaign for a purer form of revolution than that espoused by the ANC. For the EFF this means nationalisation of all land, not expropriation of selected properties, both without compensation.

One of the early indicators on whether the ANC or the Constitution comes first in the priorities of the Ramaphosa administration is the manner in which it has been dealing with the shenanigans between Jacob Zuma and Supra Mahumapelo. This drama has been playing out in recent weeks. The Constitution demands equality before the law. Cattle rustlers usually get short shrift from the criminal justice authorities. After all, cattle hold a special place in the history and value systems of the majority of people in the country. But, when the thieves are a sitting premier and a former president, it seems that the unity of the ANC is more important than the rule of law, equality before the law, and the proper administration of criminal justice.

Even within the ANC, an elaborate egg-dance has been preferred to an immediate suspension of party membership of both cadres, a disciplinary inquiry, a criminal prosecution and civil proceedings to recover the value of the proceeds of the crime, possibly already donated as lobola to the relatives of the newest and youngest of Zuma’s wives. This failure to make the hard choices echoes the failure to insist that Zuma stand down as president in October 2017, after the Supreme Court of Appeal ordered that he face the multiple criminal charges so long pursued by the DA and so improperly withdrawn by the NPA in 2009.

While Ramaphosa cut short an important visit to Europe to deal with violently expressed popular discontent with the corruption in North West, it seems he did so mainly to preserve the fragile unity of the post-Nasrec ANC-led alliance, and not to ensure that the law is used to deal with the manifestations of corruption in the province and in the actions of its premier. These facts are evidence of a glass that is more than half empty.

If it transpires that Ramaphosa prefers the revolutionary agenda, on which expropriation without compensation certainly features, then the country can expect more of the same fare that was dished up to it during the Zuma years. If his fealty to the Constitution he helped draft shines through, a less uncertain and worrisome future is in prospect. It is too early to tell – the jury is still out.

One of the ways of predicting the future is to closely observe what the new administration does about State Capture and corruption. It is common cause that the Hawks, our premier corruption busters, have not been equal to the task legislated for them by Parliament and refined for them by the Constitutional Court. The minister of finance has let it be known that the plans of the administration for tackling corruption will be made public within the next month or so. The content and extent of those plans will be a good indicator of how serious the Ramaphosa-led team is about cleaning up the mess left by the Zuma and Gupta families. Recovery of that which has been misappropriated from the state and the proper punishment of those found guilty are needed.

Neither optimistic nor pessimistic prognostications are helpful to the tasks Ramaphosa faces: he ought to be given the time and the space to take charge properly, to decide whether his team is soft or hard on corruption and whether the party he leads can continue to accommodate the crooks and brigands it currently indubitably contains. Once that decision is made the problems of poverty, inequality and unemployment will be easier to tackle in a manner that is consistent with the promises of the Constitution. As for the national democratic revolution, as Kader Asmal said years ago, it should be scrapped. DM

Paul Hoffman SC is a director of Accountability Now