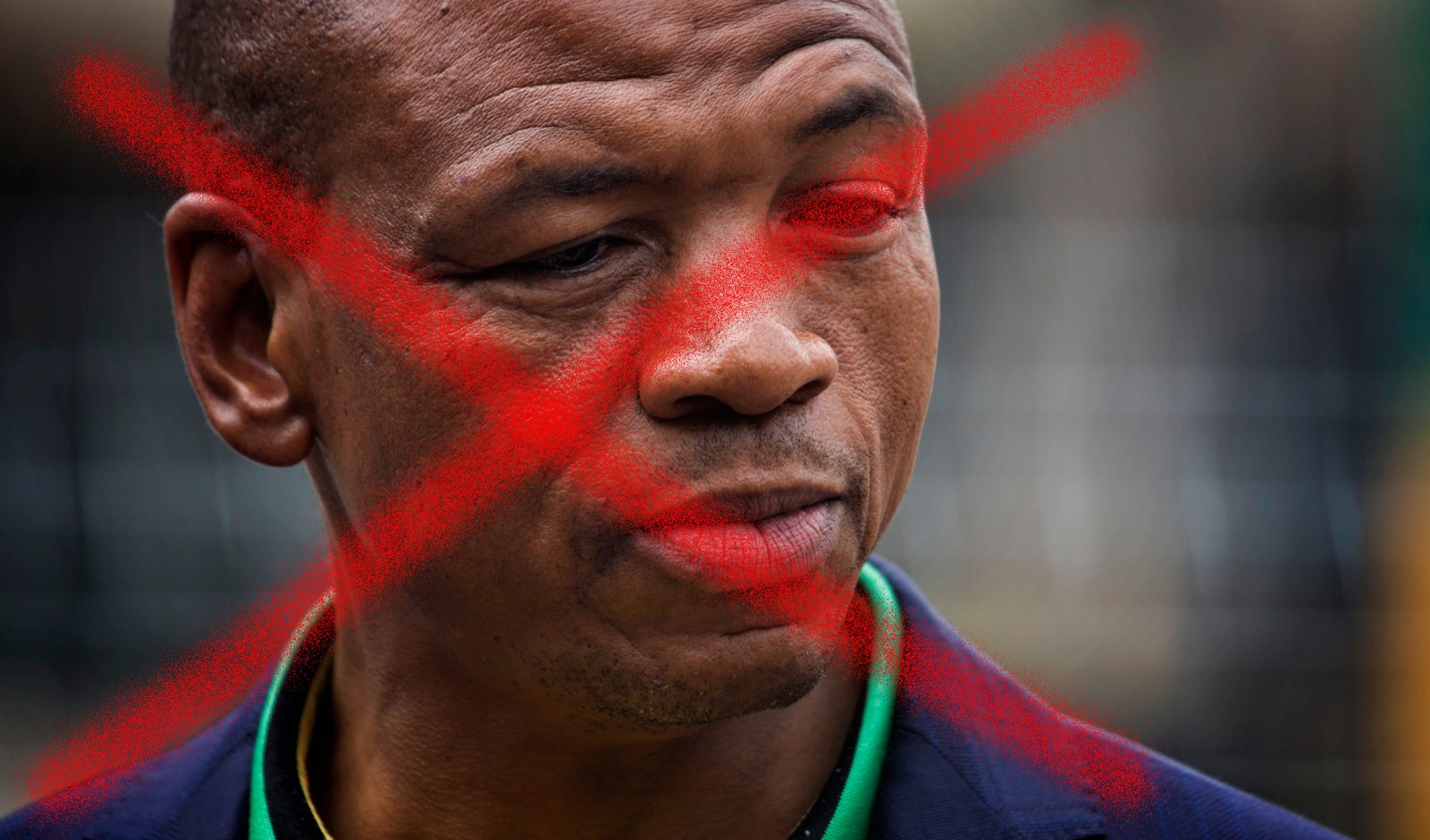 The accusations that North West Premier Supra Mahumapelo faces are so grave that some ANC provincial leaders didn’t mind confessing to crimes (which may get them a 15-year jail time) to prove the extent of the premier’s corruption. The clock is ticking.

North West Premier Supra Mahumapelo is as good as gone, with the ANC’s Top Six preparing to deliver the news to him in what is being packaged as a meeting “to discuss all available constructive options to resolve the ongoing impasse in the interest of the people of the North West province and the movement broadly”.

In ANC-spin this is code for: the party can no longer defend its provincial chairperson and premier and it can certainly not call on its members to rally behind a man who has been so crass about his corruption.

The party’s leaders do not have the luxury of time to politically engage Mahumapelo because there is a ticking time bomb of widespread protests, a shut-down health department that has been placed under administration, and a general go-slow from civil servants.

The ANC’s National Working Committee meeting that ended in the early hours of Thursday in Cape Town heard fiery arguments as to why they could not buy any more time.

The accusations that Mahumapelo faces are so grave that some ANC provincial leaders didn’t mind confessing to crimes (which may get them a 15-year jail time) to prove the extent of the premier’s corruption.

The NWC resolved, at the end, that if the Top Six led by President Cyril Ramaphosa was unsuccessful in convincing Mahumapelo to submit a letter of resignation to the speaker of the provincial legislature, the National Executive Committee will sit as early as Monday to decide on a way forward. This will probably mean that an ANC-sponsored motion of no confidence will be brought against him.

Mahumapelo on Thursday would not speak to the media, hinting that even though he may want to defend himself, he was barred from doing so by the ANC’s top leaders.

Instead, it was ANC acting provincial secretary Susan Dantjie (who is also speaker of the legislature) who fought back, saying the meetings should be used for Mahumapelo to respond to the accusations made against him.

“Accusations are just that… accusations,” she said boldly as she argued for the Top Six to give Mahumapelo time to give his side of the story.

It’s a good political trick – but at best that only buys him some time.

Most of the serious accusations Mahumapelo faces are from his own comrades – some of whom still serve in his executive.

After the series of engagements and meetings by the ANC’s leaders, finally the NWC had to acknowledge that there was no way out of it.

The accusations are as clear as they are damning.

The SACP in North West cut no corners in painstakingly listing their reasons why they believed Mahumapelo should be removed, putting together 14 broad charges against him.

It helped that they are supported by Cosatu, Sanco and the ANC veterans league there. A majority of the ANC caucus too have thrown their weight behind the reasons to recall the premier, not forgetting some of Mahumapelo’s former allies such as Collen Maine.

Some of the reasons forwarded to the party’s Top Six include the fact that he allegedly appointed a director-general who was fingered by a forensic report for corruption, that he appointed two HoDs for health and human settlements who don’t meet the minimum requirements, and that he had an antagonistic relationship with the ANC caucus in the provincial legislature.

In a letter written to ANC Deputy Secretary-General Jessie Duarte, Mahumapelo is described as a facilitator and enabler of State Capture and has been accused of tolerating corruption.

Again, these are not accusations made by opposition party leaders. This is according to people who served – and serve – in Mahumapelo’s executive.

There are two massive contracts that are often repeated amid calls for the premier’s ousting – the Mediosa and Nepo Data Dynamics contracts.

If you step out of the current political furore for a moment, and zoom in on these two issues, you will find a pattern of how State Capture happened in North West.

Three years ago, Mahumapelo placed the North West Health Department (which was previously performing relatively well with unqualified audits from the auditor general) under the administration of the provincial treasury. That made the MEC for health irrelevant.

In 2016, Mahumapelo used his state of the province address to proclaim that the Guptas would be a partner to the province, effectively introducing them to provincial politicians and civil servants.

A year later, the Guptas were courting Lekalakala and paid for his junket to India (paying for trips has been the Guptas’ go-to in their guide on how to capture a state).

Naturally, a Gupta-linked healthcare company, Mediosa, was paid R30-million up front for a three-year contract by the North West health department – without going out to tender, of course.

SACP provincial chairperson Smuts Matshe described it best in his letter to the ANC Top Six.

“The entire Mediosa service has been procured with the facilitation of the Premier,” he wrote.

It’s a similar format when you consider the Nepo Data Dynamics contract where a company is being paid exorbitant fees by Mahumapelo’s office to do the work already being done by a government entity.

ANC leaders will convince you that these two dodgy contracts are just the tip in the corruption iceberg.

Recalling Mahumapelo is the only option for the ANC leadership – but it’s not the end of the mess that is North West.

Even as he is fired as premier, Mahumapelo remains an uncontested ANC chairperson in the province. This means whoever replaces him as premier would have to then answer to him in the party.

The other option the ANC has is to dissolve the ANC leadership structure in North West. It may be tempting, but Ramaphosa knows that it would then become the third ANC province with a tentative structure – other two being KZN and Free State – and that won’t be good for the party’s 2019 election campaign.

The situation in North West will be a litmus test of how the Ramaphosa-led ANC balances the internal party struggles against the ramifications it is having on the state.

An intervention task team of 10 ministers set up by the President will have to report back to Cabinet next week – and so far what they are finding is not pretty.

Ramaphosa has been treading carefully so far when dealing with North West but he too knows that there is only one way this ends. DM