SADC is deaf to alarm bells in the region 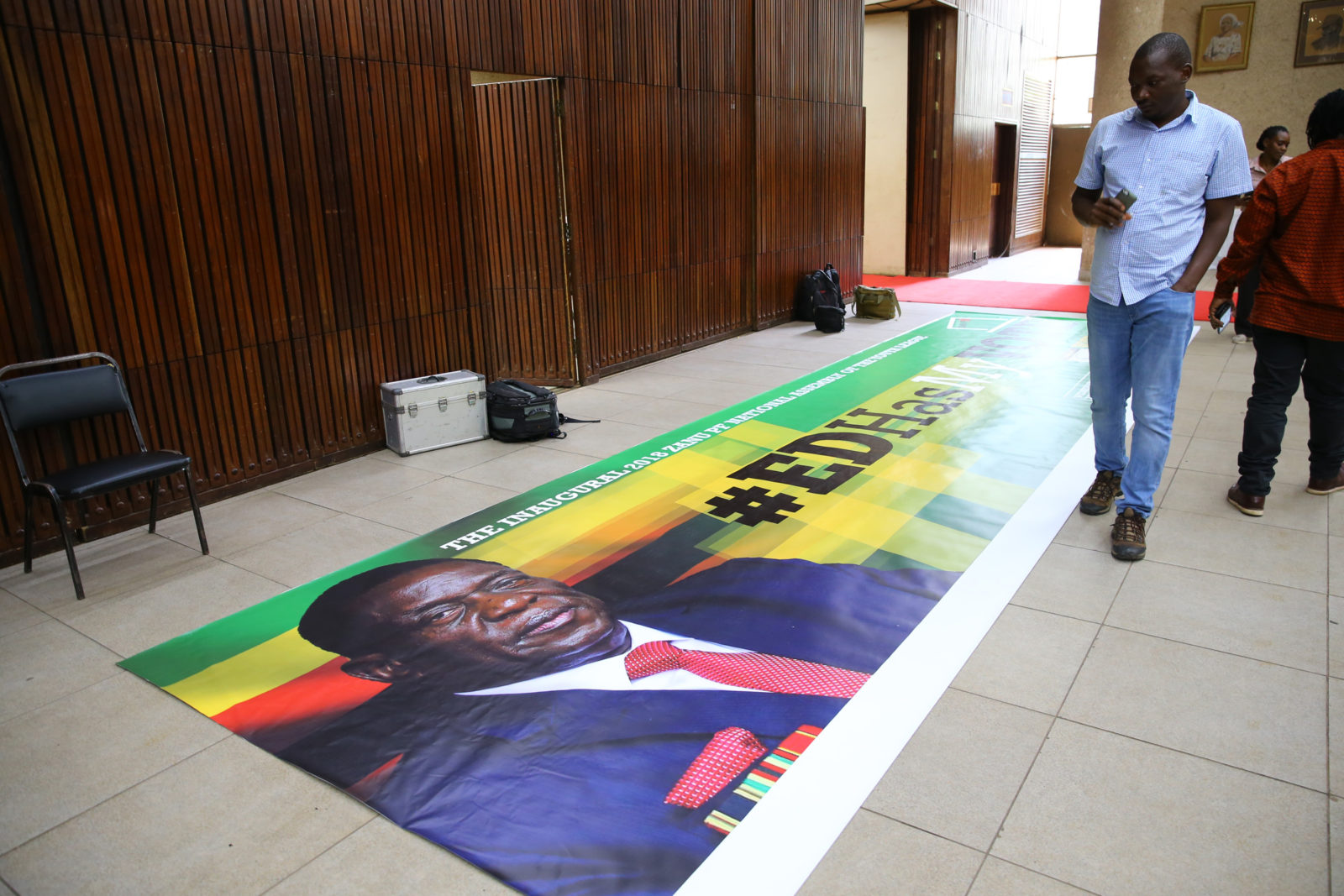 A man stands by a banner of the Zimbabwean President Emmerson Mnangagwa in time for the Zimbabwe African National Union (Zanu PF) inaugural 2018 Zanu PF National Assembly of the youth league at the party headquarters in Harare, Zimbabwe, 07 March 2018. EPA-EFE/AARON UFUMELI

Too often it takes an outbreak of violence for SADC to act on deficits of democracy and elections. By Peter Fabricius for ISS TODAY.

In their new book How to Rig an Election, Nic Cheeseman and Brian Klaas argue that across much of Africa and beyond, elections aren’t just failing to remove unpopular autocrats from power, but can “actually make it easier for dictators to maintain political control”. The authors explain this in an article about the book published by The Conversation this week.

“In other words, authoritarian regimes that hold elections are more stable than those that don’t,” they continue, demonstrating how so many autocrats are no longer clinging to power by brute force. Instead they are doing so by rigging elections. That enables them to deflect and divide opposition or avoid retaliation from the international community, such as sanctions and termination of aid.

Leaders of the Southern African Development Community (SADC) ought to be reading this book. They face a really testing year for SADC’s theoretical commitment to democracy and truly free and fair elections, as enshrined in its founding Treaty and other instruments.

The voters of the Democratic Republic of the Congo (DRC), Madagascar, Zimbabwe and eSwatini (as King Mswati III unilaterally renamed Swaziland last week) will all go to the polls this year. In that superficial sense all are democracies. But whether the collective will of the people will be reflected in the outcomes is a different matter.

Of the four, SADC is really only paying attention to those where threats to democracy are also threatening stability. This week SADC’s double troika (three leaders from the troika of SADC itself as well as three from its Organ on Politics, Defence and Security) held a summit in Luanda, Angola, to discuss problem member states. eSwatini didn’t even make it onto the agenda because it remains relatively stable, even though its elections in September will be a joke. Opposition parties are barred from contesting and the absolute monarch can overrule Parliament.

Zimbabwe was also not on the official agenda, though in the end it was briefly discussed. Now that Emmerson Mnangagwa has got rid of troublesome Robert Mugabe (with a little help from his military friends) and has promised free and fair elections in July, SADC seems to be looking the other way.

On Friday SADC executive secretary Stergomena Tax met Mnangagwa in Harare and was reported – admittedly by the state-owned Chronicle newspaper – as having told him that after sending a SADC pre-election assessment mission to Zimbabwe earlier this year, “generally our findings are that you are set for elections”.

If so, SADC would be omitting many concerns that Zimbabwean democrats still have. These include the military’s role in elections, the independence of the Zimbabwe Electoral Commission, the impartiality of the public broadcaster, undemocratic legislation that gives undue powers to security agencies and unduly restricting journalists.

Apart from Lesotho, the Luanda summit focused on the DRC and Madagascar where threats to democracy have provoked violence and jeopardised stability. The DRC has been on SADC’s worry list for some time for that reason.

President Joseph Kabila was supposed to stand down in November 2016 after his constitutionally limited two terms ended. But he didn’t, citing technical delays in holding new elections. That has provoked several deadly protests. Late last year the country’s electoral commission announced that elections would be held on 23 December this year. But Kabila still hasn’t announced that he won’t run again, which is further fuelling tensions, potential violence and instability.

Yet SADC can’t bring itself to tell him to go spend more time with his family, even politely. SADC failed again to put the squeeze on Kabila at Tuesday’s Luanda summit which Kabila also attended. Instead South African President Cyril Ramaphosa, also current SADC chairperson, said he and his peers were ‘heartened’ by Kabila’s assurances that the DRC was going ‘full speed’ towards elections.

Stephanie Wolters, head of the Peace and Security Research Programme at the Institute for Security Studies, is far from sharing SADC’s confidence that free and fair elections are on track. ‘The political environment in the DRC is anything but conducive to free and fair elections, with bans on political marches still in place, and opposition figures and civil society activists still being hounded by the government,’ she says.

Wolters says it would have been ‘useful if SADC had stated clearly that all human rights abuses must stop, that the security forces should not attack Congolese citizens wanting to express their political opinions, that political prisoners should be freed, and that the ban on political marches should be lifted immediately’.

Something similar is happening in Madagascar where President Hery Rajaonarimampianina seems to be trying to disqualify his two strongest likely rivals in elections due in November or December. He has passed new electoral laws which would probably prevent two former presidents, Marc Ravalomanana and Andry Rajoelina, from running on grounds of their tax or other legal problems.

Ironically – because after all Rajoelina toppled Ravalomanana in a 2009 coup – the two former bitter rivals joined forces on Sunday to demonstrate against the electoral laws in the capital. Police violently dispersed their supporters with live ammunition, killing at least two. That made SADC sit up at last and take notice.

And so at the Luanda summit the leaders decided to reactivate former Mozambican president Joaquim Chissano – who had been appointed as its special envoy after the coup – to urgently return to the country to mediate a resolution. Chissano’s unpopular solution between 2009 and 2013 was the ‘ni-ni’ option – to discourage both Ravalomanana and Rajoelina from running in the 2013 elections which Rajaonarimampianina won.

Even if that had made sense at the time, it doesn’t now. It’s provoking instability. Yet SADC’s attitude, despite having clearly decided who the candidates should be back then, is that it can’t tell Rajaonarimampianina he must allow Ravalomanana and Rajoelina to run this time. ‘I don’t think SADC can decide or not who is a candidate,’ said a SADC official. Yet that is what it should have done some time ago, as this crisis has been brewing for months.

Piers Pigou, a consultant to the International Crisis Group, says SADC is now reaping the bitter fruits of having taken its eye off the ball in Madagascar in 2014 when it prematurely closed its office there.

Wolters says SADC has “taken the path of least resistance on the most acute crises and seems to have caved in to incumbency again, both in praising preparations for elections in Zimbabwe and especially in the DRC where the extended electoral crisis has cost the lives of many protesters and has heightened acute humanitarian needs”.

“For SADC to take DRC propaganda about electoral preparations at face value is a sign that it is not yet ready to take the steps necessary to improve the quality and credibility of elections in the entire SADC region,” she says.

Too often it takes an outbreak of violence for SADC to pay attention to glaring deficits of democracy and elections. Yet if it had the ears to listen, those deficits would be stridently sounding the early warning alarm bells of impending violence. DM