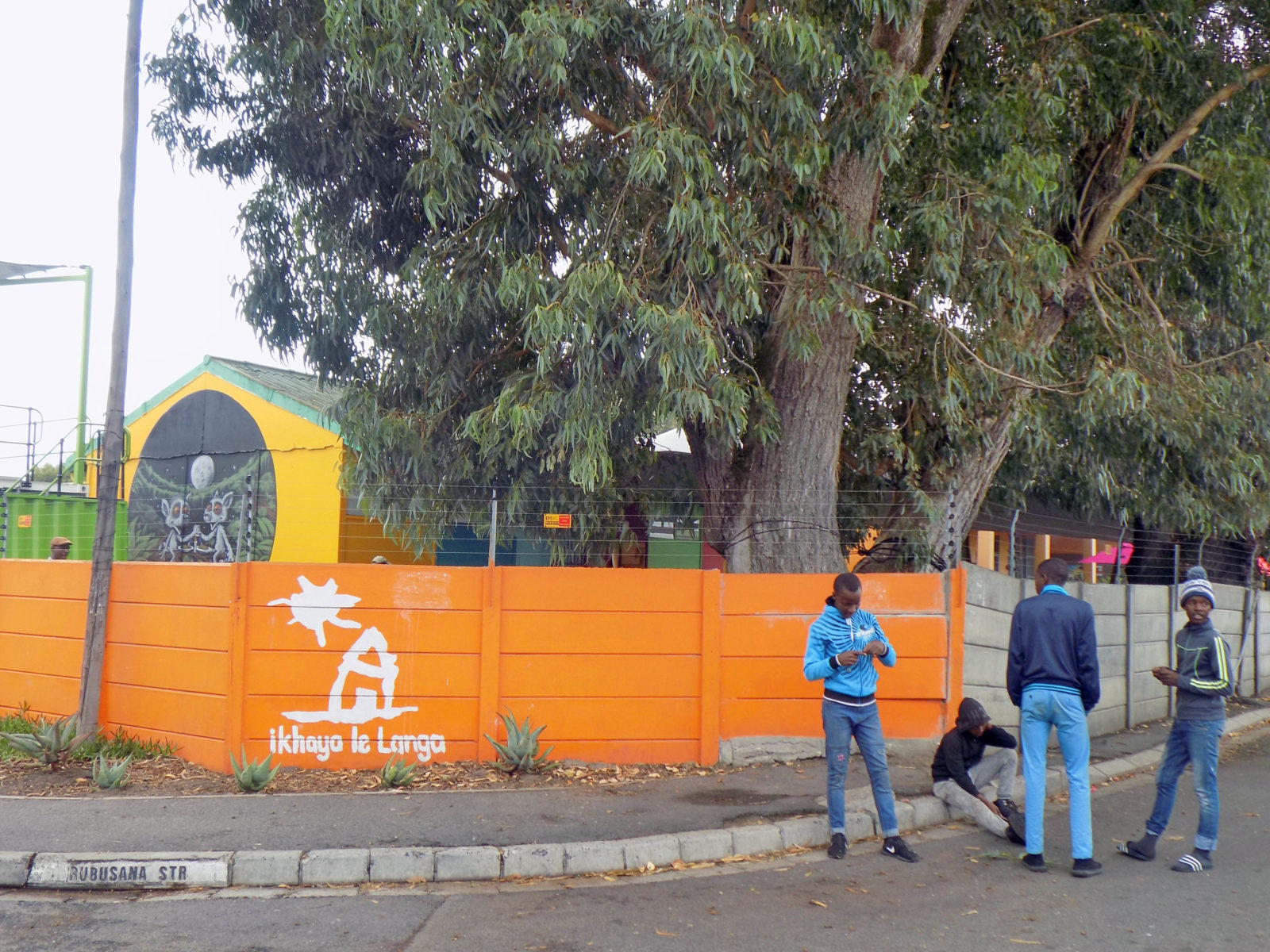 Youngsters gather at the corner of the street of Ikhaya Le Langa in Langa, Cape Town, 19 April 2018. Photo by Hlumela Dyantyi.

With bright orange walls and an array of plants leading up to the entrance, Ikhaya Le Langa stands out as a beacon of hope for tourism in the community of Langa outside Cape Town. It has opened up opportunities for enterprising locals.

An enterprising tourism hub is developing in Langa to transform the legacy of apartheid and spatial planning that has held back development in the township.

“Langa was separated by a road, a railway line and a wall from Pinelands and Athlone just next door. That is how Langa was separated from opportunity by apartheid spatial planning,” said Tony Elvin, who is behind the development of a social business tourism hub in the township called Ikhaya Le Langa.

“Langa is the centre of the universe,” said Elvin.

Langa is centrally located – it’s just 13km from the Cape Town city centre – yet development from the Central Business District has not filtered through to the township, with many Langa community members struggling to make a living.

Elvin argues that corporates are not as involved in township tourism as they should be. That is why he developed Ikhaya Le Langa.

Elvin is a half Jamaican, half British tourism businessman from London. He has worked with the likes of Jamie Oliver, but has said that his work in tourism has always had a bigger social purpose.

Elvin visited South Africa in 2004 and fell in love with Langa. After years of finding excuses to come back, he decided to make the country his home and opened up Ikhaya Le Langa in 2013. He now lives permanently in Langa.

Langa was the first planned township in the Western Cape, dating back to 1927. It was originally designed as a labour camp for single young men, recruited from Ciskei in the Eastern Cape. With its rich history and central location, Langa could offer a sea of tourism opportunities to the many black disadvantaged community members, who struggle to make a living today.

Even though apartheid ended in 1994, Langa still has not overcome much of the damage that the Struggle imposed over Langa community members who still have limited access to job opportunities. Langa has an average annual household income of R29,400 (or R2,450 per month per family), a 42% employment rate and 22.7% of it comprises informal settlements, according to the latest census statistics.

Ikhaya Le Langa, which seeks to bridge the gap between townships and tourism, is a social enterprise development project run by Langa citizens.

Elvin said that all profits made through the business go back to Langa community members and to the upliftment of Langa.

The 207 homes surrounding Ikhaya Le Langa, which Elvin has named the “Langa Quarter”, have been transformed into restaurants, galleries, homestays and shebeens. Traditional foods, the Langa Township Heritage Museum or Dompas Museum, 40-minute historical re-enactments, local art and walking tours are part of the tourism experience. It has also linked up with Airbnb to open opportunities for locals.

Daily Maverick accompanied a tour bus of international tourism buyers to Ikhaya Le Langa earlier in April as part of the World Travel Market Africa (WTM Africa) that was held in Cape Town. WTM Africa was launched in 2014 and approximately 5,000 travel industry professionals attend the exhibition where workshops, presentations and information booths give light to African travel and tourism markets.

WTM Africa also helps professionals in the African travel industry to become commercially successful by giving them access to make connections, industry news and developments, trends and technologies from around the world.

The building that houses Ikhaya Le Langa used to be a primary school, and the rooms that used to be classrooms are now centres for different projects.

Amashishini (which means businesses) is the room where educational workshops are held. There is an Airbnb support desk and Ikhaya Le Langa is setting up a construction site for the home stays that need renovations. There is a shop for tourists to buy locally produced products such as beads and other arts and crafts.

The Amathuba Agency (“opportunities”) acts as an employment agency. Fashion shows are held and Xhosa classes will soon be open to the public, with street artists given a platform to perform.

The Mother of Langa

Among the people who are benefitting from the home stay hotel is Linda Pona.

Pona has been working with Ikhaya Le Langa since 2016. Pona used to be employed as a domestic worker. Her husband worked for Black Sash. Pona’s husband became ill and had to retire, so she had to take care of him. She was fortunate to become part of Ikhaya Le Langa’s Home Stay project because it meant that she could work from her home, while also taking care of her husband. Pona describes Elvin as “the man who gave me a slice of bread”.

Within the Home Stay project, Langa community members rent out their homes for R500 per day to students who want to get a short-term township experience. Pona rents out two bedrooms from her home. She cooks three African meals – such as Umngqusho and Imifino – a day and the weekend is rounded off with an invitation to a local church.

Pona said that being part of the Home Stay project gave her a stipend to live on and introduced her to the idea of renting out her home. Now one of her sons also rents out his home in Langa to make extra money.

In March 2017, Pona along with eight other Langa residents who she refers to as “ooMama base Langa” (the Mothers of Langa), were introduced to Airbnb as part of the Home Stay Project. The CEO of Airbnb flew in to congratulate residents and welcome them to the programme. Pona now rents out her home through Airbnb and is becoming more independent of Elvin.

The Barista of Langa

Asekho Mjojeli has been at Ikhaya Le Langa for three years. He first joined the programme as an ambassador and is now a full-time resident Barista.

The ambassadors programme is voluntary and has four levels; the ambassadors work 10 shifts in order to proceed to the next level. Ambassadors receive a stipend for the shifts that they work and if an ambassador does not show up for a shift, they are pushed back to the previous level. Shifts include gardening, picking up litter in the Langa Quarter, braaing and guarding the gates when there are events. Ambassadors can also be involved in tour guiding, media and crafts.

Upon completing the ambassador programme, Mjojeli developed a particular interest in coffee-making. Self-taught, he became Ikhaya Le Langa’s first full-time barista. Mjojeli has mastered the art so well that he has won a Unisa scholarship for barista training for six months.

“Once I finish the training this year, I’ll be an internationally recognised barista,” Mjojeli said.

After matriculating, Mjojeli moved to Cape Town from Lusikisiki in the Eastern Cape in 2012, after he had been accepted to study at the Cape Peninsula University of Technology (CPUT). His parents died when he was a young boy. He was brought up by his three siblings and extended family members, so moving to a big city was a huge accomplishment for him and his family. But when Mjojeli arrived at CPUT he was told that his acceptance was an error, and he could not be admitted. When he came across Ikhaya Le Langa, he felt that the direction of his life could be changed. It was.

The Ambassador of Langa

Thandolwethu joined Ikhaya Le Langa one month ago. Thandolwethu has a bandage wrapped around his hand. When asked what happened, he says that he was playing with his cousin and fractured his wrist. He is 21 and was previously involved in gangsterism and drug use, a problem that many young men face in Langa.

Thandolwethu, who did not want to be fully identified, works three days a week as part of the ambassadors programme.

He approached Elvin after seeing a couple of local boys working at Ikhaya Le Langa. Thandolwethu said that he was grateful to be accepted into the project — he felt that he needed something to keep him busy so that he can stay off the streets and away from danger.

“I have watched people die right in front of me and I have even had some of my friends stab my other friends. I needed a way to get out and Tony really helped me. He is like a father to us all here in Langa,” Thandolwethu said.

He was studying information technology at Cape Town College in Crawford, but was denied a spot in 2018 because his grandmother was unable to afford the R12,000 registration fee. He hopes he can work enough shifts and save up so that he can pay for his own registration in 2019.

Thandolwethu has received a range of reactions from community members. Some were happy for him and some were jealous. Some rival gang members wanted to see him fail, Thandolwethu said, and he added that they would even make comments that he is still not back at school, that he should not think that he is better than them, that he is still in the township just like them.

These comments only push him to work harder.

“You know how people are, especially in our communities; they don’t want to see you succeed, some of them were even jealous of Tony because he’s an outsider helping us, but what we’re really doing is just bettering our own community,” he said.

Elvin said he was sensitive to people’s trauma in the community and there is still a lot of healing that needs to take place to deal with the damage of apartheid, which is why the tour also offers a 40-minute re-enactment where tourists relive the realities of apartheid South Africa in order to appreciate the community more today.

“Ikhaya Le Langa is not where we want it to be. In fact, we still have a long way to go, but I’m an optimist, and we’ll get there,” said Elvin. DM