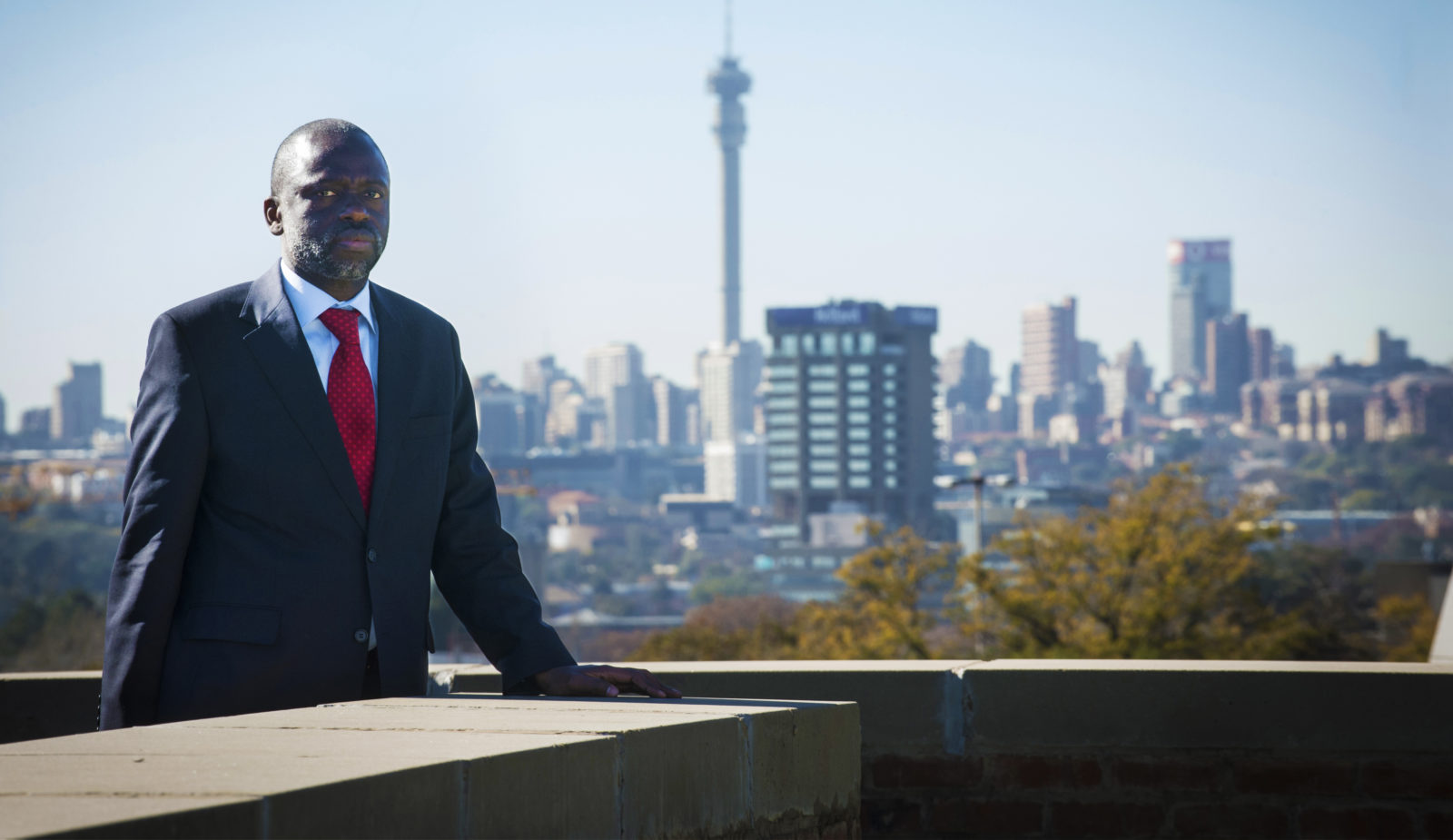 In a wide-ranging interview with Daily Maverick Tshilidzi Marwala, the new Vice Chancellor (VC) of the University of Johannesburg who was inaugurated recently, outlines his plans to make a university for the 22nd Century.

In an age when technological advancement will soon replace the labour force, Professor Tshilidzi Marwala looks ahead to South Africa’s future and aims to be prepared for it.

“Those who will thrive in the fourth industrial age will have to understand the world, and University of Johannesburg should be at the forefront of laying down a foundation for a university of the 22nd century,” said Marwala.

The fourth industrial revolution, according to Marwala, is going to integrate man and machines, the physical and the cyber. This type of technology will affect us all by transforming the world. Factories are expected to have fewer people and will be powered by artificial intelligence technology.

“And no one will be spared, it will be an age of automation where machines are going to be working in factories, in homes and in hospitals,” said Marwala.

On 1 January 2005 the University of Johannesburg was founded with the merger of the former Rand Afrikaans University (RAU), the Technikon Witwatersrand (TWR) and the Soweto and East Rand campuses of Vista University.

Marwala holds a PhD in Artificial Intelligence from the University of Cambridge and is Africa’s leading academic in the field. After completing his Cambridge studies he became a post-doctoral research associate at the University of London’s Imperial College of Science, Technology and Medicine, where he worked on intelligence software.

Before this, his are humble beginnings coming from Duthuni Village in the Tshivhase region of the Limpopo Province, where he learned in a school where classes were held under a tree.

“With little more than a few rickety benches under a tree, when rain or cold weather descended, the classes were often abandoned,” said the university’s spokesperson, Herman Esterhuizen.

Under his belt are an array of awards and accolades, too many for one lifetime. He has published 11 books, with over 280 papers in journals, book chapters and magazines, and even holds three international patents.

Before his appointment as UJ Vice Chancellor, Marwala was the Deputy Vice Chancellor of Research and Internationalisation, and the Executive Dean of the Faculty of Engineering and the Built Environment at the university.

Marwala’s grand vision is to make UJ a Pan-African institute that values African knowledge systems without losing track of global advances in technology.

With this in mind, the VC aims to make UJ a big player in the forthcoming technological revolution by ensuring that his students are well trained and prepared for it.

In order to achieve this the VC has a number of objectives which he would like to achieve in his term. Among these is to increase the qualification levels of  staff by aiming to have over 80% of the staff with PhDs by the year 2025.

This is in line with the university’s plans to deepen its international profile by “bringing the world into our classrooms and taking our staff and students into the world”, said Marwala.

But before he gets to that level, Marwala has to address the issue of ensuring access to higher education.

Tertiary campuses have been places of strife in recent years with students embarking on protest action demanding free higher education for students from poor backgrounds.

UJ’s student body is predominantly made up of students who come from disadvantaged backgrounds because its tuition fees are somewhat lower than other institutions.

The pre-ANC conference announcement by former President Jacob Zuma that free education for disadvantaged students would be implemented from this year means that Marwala is unlikely to experience the violent protests faced by his predecessor for the past three years.

“The free education is paid for by the government, although it is being phased in and only applies to first year students who come from families who earn less than R350,000 per annum,” said Marwala.

The challenge is with the category of students referred to as the “missing middle”– those who come from families earning R370,000, or he may have two or more children at university at the same time.

To make up for this shortfall, the university organises the Missing Middle campaign annually in attempts to raise funds for students who can only afford part of the fees for tuition and accommodation.

“Last year we raised over R200-million for such students,” said Marwala.

Student accommodation has become an important issues on campuses after the #ShackVille protests at UCT. Students protested over the lack of adequate housing to accommodate students who could not afford to live outside the university.

UJ takes in about 50,000 students annually and has just under 7 000 beds internally. This means that only 14% of the students can live-in on the university campuses.

But Marwala says they have a multi-pronged strategy to deal with this.

“We are going to expand our capacity internally, by building a residence in our Soweto Campus in partnership with the government. The second strategy that we will pursue is public-private partnership. These are basically people who come and put their structures outside our campuses, and we go out there and accredit them. So our students can get the accommodation that is conducive to teaching and learning,” said Marwala.

In 2016, the University of Pretoria experienced #AfrikaansMustFall protests calling for the removing Afrikaans as a medium of instruction. UJ, although largely transformed at a student level ( 87% are black), it is still overshadowed by the legacy of the old Rand Afrikaans University and still faces challenges in its evolution.

“The challenges are basically at a staffing level –particularly academic staff. The seniority of our academic staff is a huge concerns. We don’t have enough black professors and associates professors. We have a plan to tackle that – the Accelerating Mentorship Programme that is specifically aimed at targeting designated people,” said Marwala.

Black academics make up 40% of the teaching staff and 15% are international.

“Is it where we want it to be? No. There are lots of things we still want to do,” said Marwala.

In 2017 the university retained its QS Top 50 Under 50 Universities ranking for the second year since 2016. And for any Vice Chancellor rankings are as important as ratings are to a TV show.

“Universities became universities because they do three things. The first one is teaching and learning, the second, research and innovation and the third one is community service. If any of these things are missing then the university is not complete,” said Marwala.

The Shanghai Rankings placed UJ at number four in South Africa, ahead of University of Pretoria. It was placed at number eight in previous years.

Much of the rankings look at the staff to student ratios, the infrastructure that a university has, the research capacity, the quality of the staff – how many Nobel Prize winners are teaching students and the number of international students at the school.

“People who are doing research are people at the latest of knowledge. So if you are taught by someone who is operating at the cutting edge of their knowledge domain this will go into come to the classroom, one way or another. Teaching without research means you become stale, and ultimately you start teachings things that are out of date, at the expense of students,” said Marwala.

The VC plans to create a vibrant research environment with students who might not have been able to study further because of financial constraints and the demands to provide for their families.

“I personally have spent a great deal of time doing research in artificial intelligence and I have supervised 72 masters and doctoral students to completion. What we want is for those students who come from backgrounds that do not permit them to do doctoral studies, to have an opportunity to do so. We give them scholarships, which might not seem like much but which enable them to study and sometimes support their families,” said Marwala.

The decolonisation debates that has at times dominated discussions on campuses around the country has not escaped Marwala.

“We have the Africa Insight Modules, a compulsory undergraduate course that students will take online in pursuit of decolonising the university curriculum. One of the major projects in this will be to undertake to write 10 biographies of African leaders who have played critical roles in our lives such as Lillian Ngoyi, Gertrude Shope, Queen Nzinga Mbande and others,” said Marwala. DM