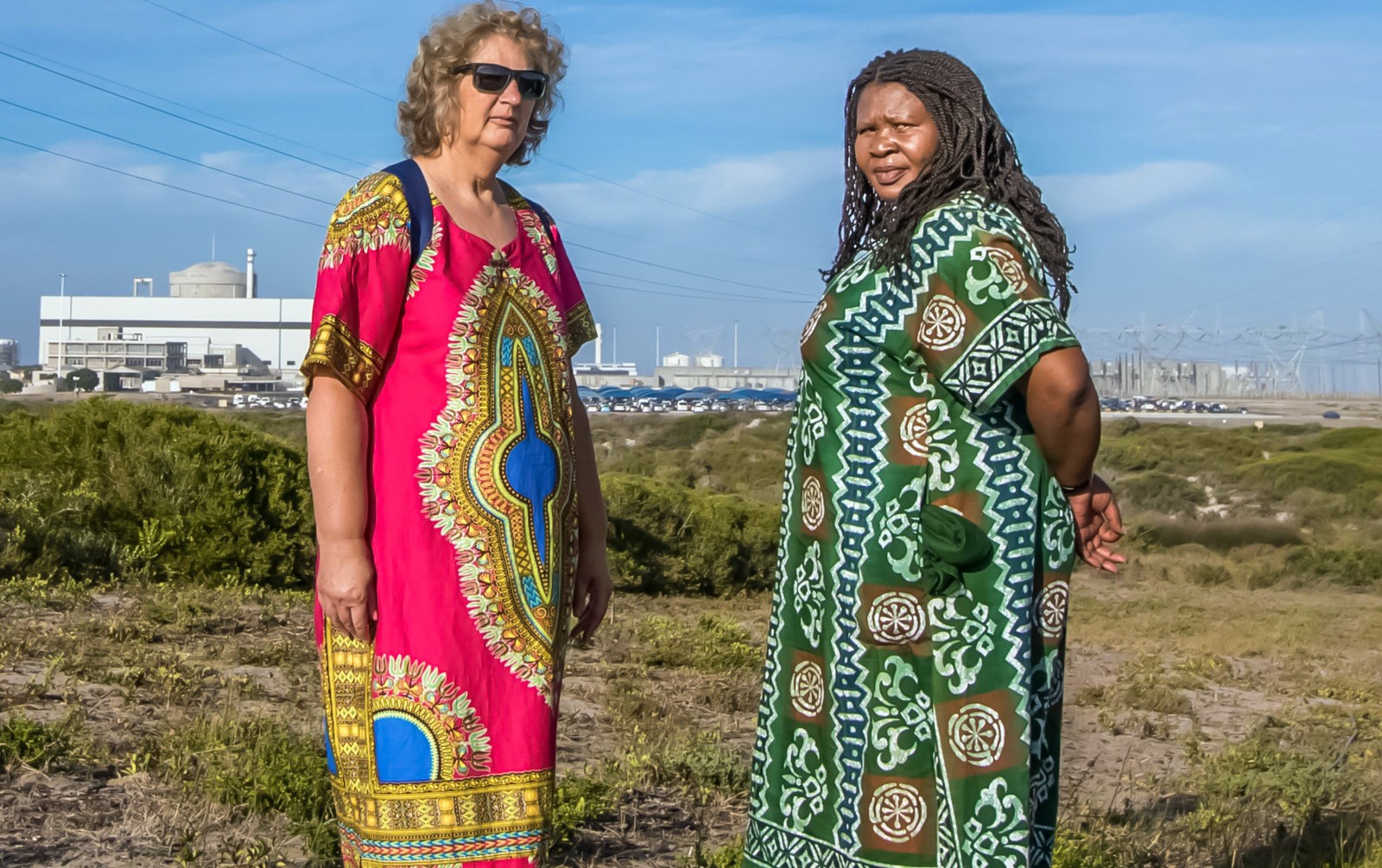 Environmental activists Liz McDaid and Makoma Lekalakala won the prestigious international Goldman Environmental Prize on Monday for exposing the government's unlawful and unconstitutional nuclear deal with Russia, and getting the deal overturned in a landmark court case. Here the two pose in front of Koeberg nuclear power station. Photo: Supplied

Two South African activists who took on the president and energy minister and succeeded in blocking the controversial multibillion-rand nuclear deal have been singled out globally and rewarded for their courage, compassion and vision in the name of environmental justice.

When environmental activist Makoma Lekalakala heard that she and her colleague Liz McDaid had won their 2017 court case that effectively stopped South Africa’s controversial nuclear programme in its tracks, she bent her head and wept.

“It was tears of joy. We took on that case in the public interest against the government and against the president, and it was a hard route and long, but we won,” said Lekalakala.

On Monday she and McDaid were winners again when they were named the joint recipients of the prestigious international Goldman Environmental Prize for “outstanding environmental achievements in Africa” at an awards ceremony in San Francisco.

The award, the world’s largest award honouring grassroots activists, was an acknowledgement of their commitment to holding the South African government to account in a battle that they say sometimes they felt they could not win.

Said McDaid: “In my book, Parliament failed the people of South Africa when they let that secret nuclear deal with Russia go through, so it was up to us as civil society to hold the executive to account. Civil society has to work hard to keep democracy alive or it will be whittled away.”

The anti-nuclear stance of both women goes back many years, and in McDaid’s case, several decades. Both were political activists prior to democracy in 1994 and both joined the environment lobby group Earthlife Africa, where Lekalakala is now co-ordinator in Johannesburg. Later McDaid joined the SA Faith Communities’ Environmental Institute (Safcei).

The story behind their court case began in 2014. A Russian anti-nuclear activist saw on the website of Russia’s state-owned atomic energy corporation, Rosatom, that the organisation had signed a deal with the South African government to supply 9.6Gw of nuclear power to the country – roughly the equivalent of 10 new nuclear power stations. He told Earthlife about it.

“No one here knew anything about it, so Earthlife broke that story. We put out a press release about this secret deal, and then suddenly it was gone from Rosatom’s website,” Lekalakala said.

Earthlife and Safcei are opposed to nuclear power because of environmental problems associated with radio-active waste; the enormous cost of nuclear – a trillion rand was the estimate of South Africa’s proposed programme; safety issues and the question of whether the country needed it.

Both activists were also concerned with potential environmental and health problems associated with increasing the country’s uranium mining to produce nuclear fuel for the programme.

Above all, both were opposed to the secrecy that had surrounded the nuclear deal with Russia, the lack of public consultation, which they said was unconstitutional.

“And it came after the failed Pebble Bed reactor project that cost the country about R11bn. So much money had been wasted on nuclear already. And this Russian deal seemed like a done deal. (Former President Jacob) Zuma was doing a lot of trips to Russia,” Lekalakala said.

Earthlife began writing letters to the then energy minister Tina Joemat-Pettersson and to the energy department, trying to get answers about the Russian nuclear deal, with little success. Lekalakala paid tribute to a colleague, Tristan Taylor, who had been instrumental in this work.

It was McDaid who found out that the Russian nuclear deal had been tabled in Parliament via a back door, which had ensured that there was no parliamentary debate on the trillion-rand deal before it was approved.

“Part of my job is to monitor Parliament and so I was there and found out,” McDaid said.

Lekalakala and McDaid raised questions with Parliament, with the energy portfolio committee, organised weekly vigils outside Parliament, organised marches to Parliament to hand over memoranda calling for public hearings, but to no avail.

Eventually, the two organisations resorted to legal action. They took on the energy minister and Zuma in their bid to have the entire process that had led to the nuclear deal reviewed and set aside.

The Western Cape High Court found in their favour. While it was not within the court’s jurisdiction to decide on the merits of the nuclear programme, it could make findings on whether the legal requirements had been met. It found that the government had not followed the legal process when making the nuclear deal, that the deal was unconstitutional, and it was set aside.

“What the court case did was press the reset button,” McDaid said.

“That nuclear deal is off the table, null and void, but the government can get another nuclear programme going. But this time it has to follow due process, and it has to have public consultation – and there will be a lot of public opposition.”

McDaid said the court case has been tough, with the government and Eskom stalling the process and making changes at the last minute. She saw it as an attempt to exhaust the NGOs financially and emotionally.

“There were a lot of dirty tricks in the court case. In my view the energy portfolio committee were complicit in the nuclear deal as they quite happily accepted that this was fine. They have never had any public hearings around any issues,” she said.

Lekalakala said they had not realised at the time that the secret Russian nuclear deal was part of a bigger problem of state capture in South Africa.

“There were some people who thought we were crazy to take on the president, but through the courts we were vindicated.”

Susie Gelman, president of the Goldman Environmental Foundation, said McDaid and Lekalakala epitomised what the foundation stood for: courage, compassion, vision, collaboration and hard work in the name of environmental justice.

“Their significant achievements in South Africa inspire people all over the word and we’re proud to recognise the efforts of these dynamic environmental leaders,” Gelman said. DM