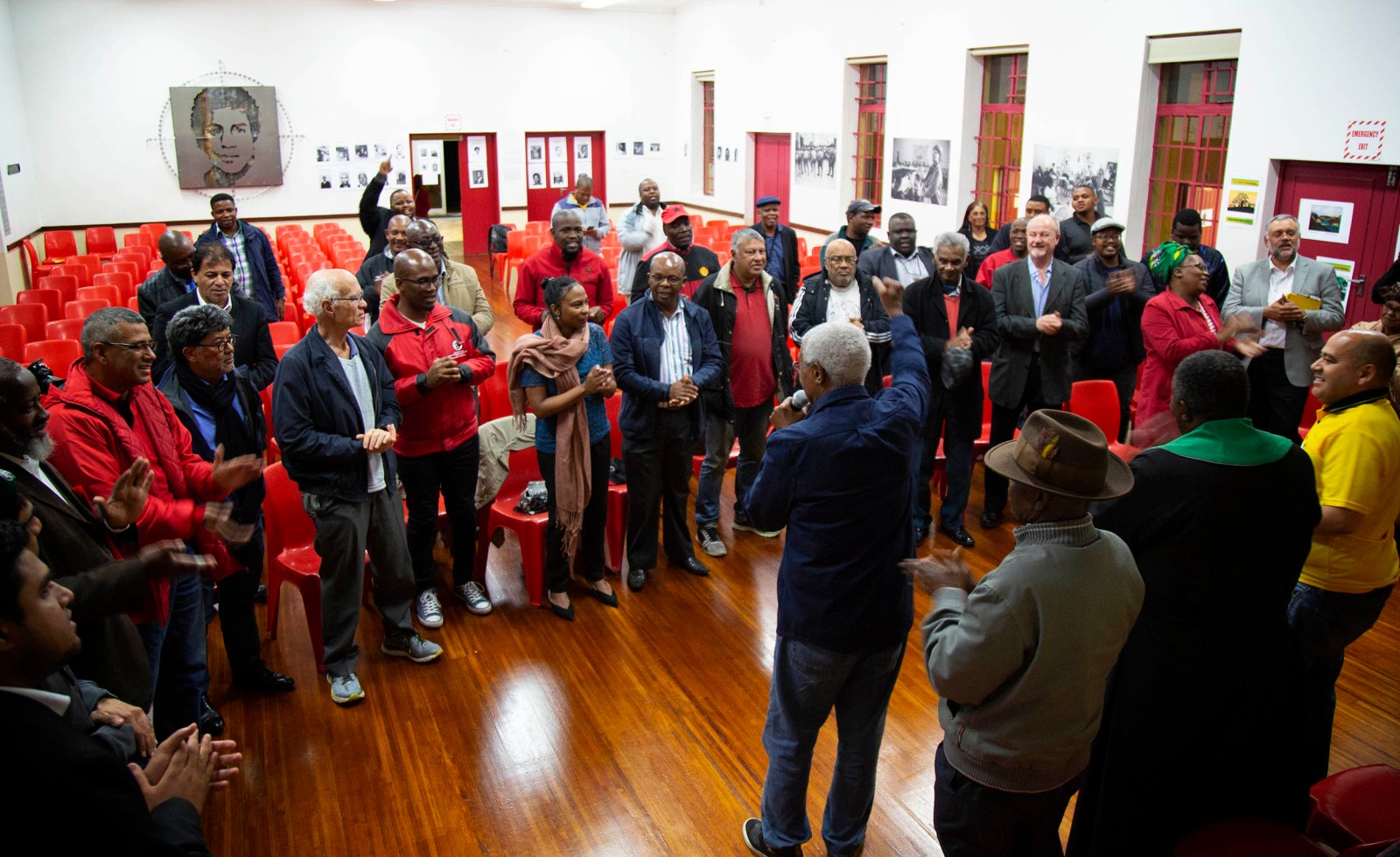 A small hall in the community of Salt River, Cape Town saw a handful of mourners gather to pay their last respects to an ANC veteran and trade unionist, Archie Sibeko. He was one of the founding members of the South African Congress of Trade Unions (Sactu) and one of the 1956 Treason Trialists. His is the third death the former liberation movement has suffered just this month, following Winnie Madikizela-Mandela who died on 2 April, and the death of MP Zola Sidney Themba Skweyiya on 11 April.

“I wanted to celebrate rather than mourn,” said former Arts and Culture minister Pallo Jordan, who delivered the keynote address. Jordan described Sibeko as a fire-clay loyal and highly driven leader of the ANC who pulled no punches and was not afraid to mobilise workers from the ground up.

Jordan said that often the country is “caught up” by the passing of the highly celebrated leaders and that ordinary leaders should be praised more often.

“There can be no Winnie, no Oliver Tambo, no Walter Sisulu if there aren’t ordinary people. Ordinary people, the common soldier, the cook, the builder, those are the people who make leaders,” he said.

Jordan and Sibeko first met on the Grand Parade in 1960 shortly after the Sharpeville massacre and the first state of emergency, which was declared by the apartheid state. Sibeko was addressing a meeting at the time and Jordan recalled his “beautiful Xhosa”, a language which he said was rarely used on public platforms in those days. “Everyone wanted to speak ‘big’ English back then,” he chuckled.

Jordan recalled the uprisings against the 1955 Coloured Labour Preference Policy enforced under prime minister Hendrik Verwoerd, which sought to create a “coloured nation” in the province that would be a preferred labour source over black African labour in the Western Cape. This policy led to black African families being forcibly removed from the province, which leaders like Sibeko fought against fervently.

General Zolile Nqos of the Veterans League, who had fought under Sibeko’s instruction, said he was a man who spoke his mind but was “under-rated” as a leader.

“We are dealing with someone here who went through it all. He was a trade unionist, he was a soldier, he was a communist. Sometimes people talk about Mandela, Mandela Magic, but this man took no credit,” he said.

Outgoing Cosatu Western Cape secretary, Tony Ehrenreich said the former Umkhonto we Sizwe (MK) commander encouraged workers to “work together” to achieve their goals. He echoed sentiments that leaders are not respected when they are alive and that in death their legacy must continue to “inspire” a new generation of leaders who will do the necessary work on the ground to mobilise workers.

“Comrade Archie organised workers who were bus drivers and workers who were stevedores in the harbours and now with the middle of the strike around transport we remember why it’s important to organise workers and to strike in solidarity as all workers and across unions because Archie encouraged workers to work together,” said Ehrenreich. “We hope the workers of the bus strike win their demands and we hope that we’re able to build a public transport system that undoes apartheid legacy.”

The current national bus strike brought services across the country to a halt and left thousands of commuters stranded this week. In Cape Town, the services affected include the MyCiTi and Golden Arrow bus services.

“These struggles are all important to honour the legacy of the many leaders who have come before,” said Ehrenreich.

Former Western Cape premier Ebrahim Rasool spoke about Sibeko’s humility and the rise of the trade unions during apartheid. “These are the people who cleaned other people’s houses and filled petrol tanks by day and led the ANC by night,” he said.

Jordan, who quit public office in 2014, recalled Sibeko’s humility through an anecdote. Sibeko requested that after his death, his gravestone should “not be higher then the average” gravestone at his place of burial.

“Comrade Archie became involved in the struggle to create a better world and that is something worth celebrating,” said Jordan.

Sibeko, commonly referred to as Zola Zembe or Comrade ZZ, was born in the Tyhume Valley, Kwezana in the Eastern Cape on 3 March 1928. He attended a local village school and later attended Lovedale High School. He then went to the Fort Cox Agriculture and Forestry Training Institute.

After graduating as an Agricultural Extension Officer he moved to Cape Town and became heavily involved in the trade union movement joining the South African Railway and Harbours Worker’s Union (SARHWU) as well as Sactu.

Sibeko joined Umkhonto we Sizwe in the 1960s and received military training in Tanzania as well as the Soviet Union, East Germany and Cuba. He became a camp commander in Tanzania at Kongwa. He returned to South Africa in 1990 and was honorary president of SARHWU until his death.

He was also a former deputy chairperson of the ANC in the Western Cape.