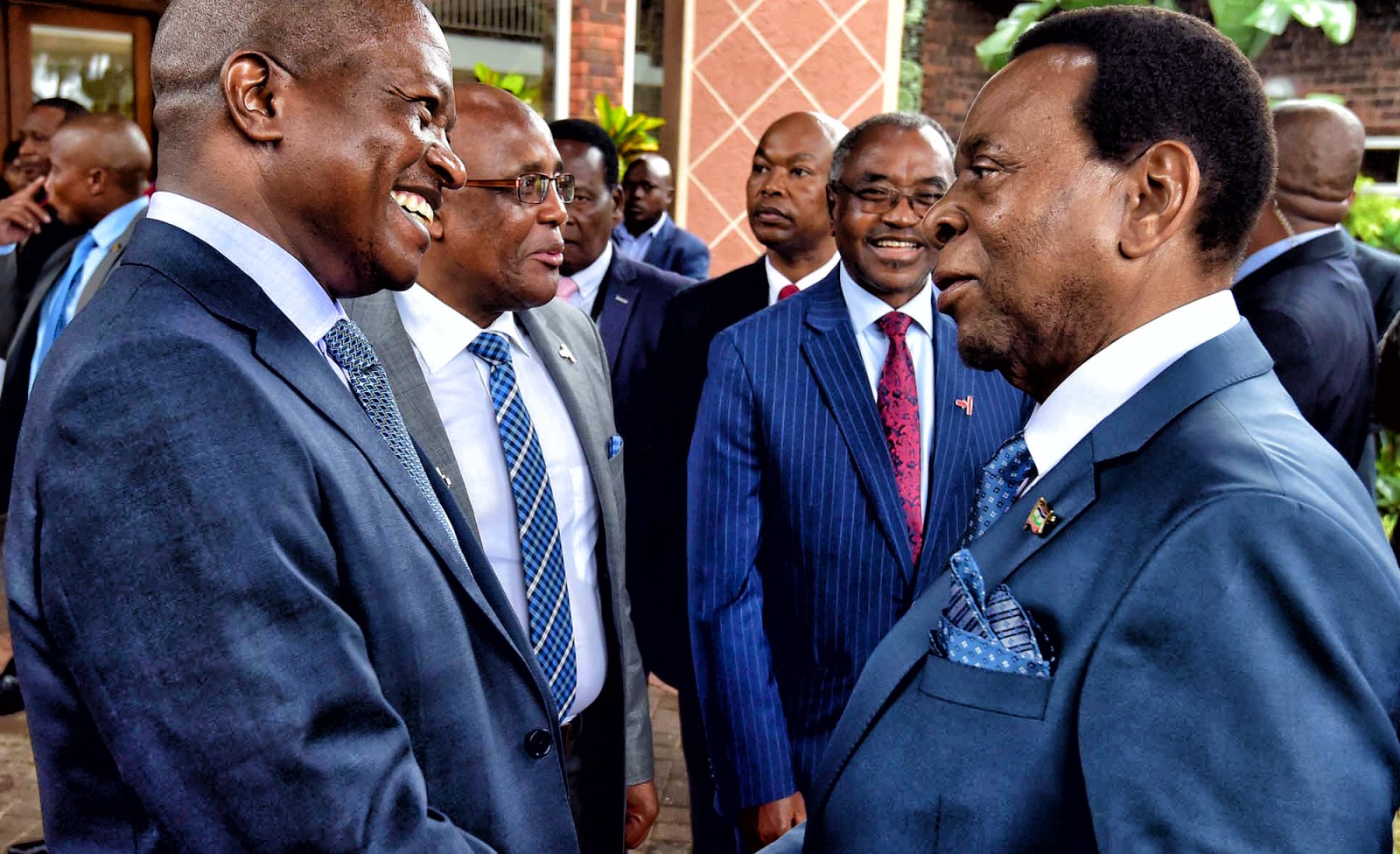 King Goodwill Zwelithini ka Bhekuzulu arrives at the Chief Albert Luthuli Hospital in Durban and is received by Deputy President David Mabuza, who is the Chair of the South African National AIDS Council (SANAC), KwaZulu-Natal Premier Willies Mchunu and the Minister of Health Dr Aaron Motsoaledi during the World TB Day Commemoration held in Durban, Kwa-Zulu Natal. The event forms part of the global World TB awareness activities aimed at raising public awareness about tuberculosis and the efforts made to prevent and treat the disease. This year's Commemoration is held under the theme: "Unite to end TB & HIV - South African Leaders taking action".

Let us not forget, amid all this self-righteous belligerence, that the Ingonyama Trust Act itself is the bastard child of two dogs of war, the National Party and Inkatha, which at the time was holding a gun to the head of the 1994 democratic election. That its very legality has not been challenged is one of the mysteries of post-apartheid South Africa.

How do you see the land issue, I asked someone whom I must describe as a Zuluphile, being neither black nor Zulu, but to hear him speak you’d assume he was both. We were talking about the impending changes to the Ingonyama Trust Act, and he was getting very worked up.

“What no one realises,” he said, “is that this land is the last remnant of African life that is remotely intact. If Ingonyama goes, it’s the last of Africa, the last of the Zulu people.” This is a sense of land, the loss of which, as the Zulus said to British High Commissioner Bartle Frere, “is to be isangcobe instead of umbila ong’umzanzato” (spoiled maize out of the holes in the cattle-fold, instead of maize which is sound, dry, and hard).

This is not a sense of the “… South Africa our land” of the national anthem: one people under one flag. This is land with a distinct history, part of a cosmology in which the past is indistinguishable from the present, in which there are a people who do things differently and consider themselves separate from and unbeholden to others. This is the idea of land that Shepstone wrestled with in the 1850s as he tried to apportion territory to settlers where they could farm unimpeded (by blacks, primarily, but also by meddlers in London), and to the various clans where they, too, could be protected from further land grabs by settlers, and continue to live under customary forms of governance, albeit under the rule of colony.

To get overly misty-eyed about this imagined idyll is to ignore the wrecking ball of colonialism, apartheid, the ravages of globalisation and the tide of urbanisation. Above all, it is to ignore the demands and constraints that have been brought about by democracy.

The bellicose bluster of King Goodwill Zwelithini and his latter-day disciples in the ANC and the DA makes it sound as if an African Arcady is under imminent attack from Attila, Genghis Khan, the ghost of Jan van Riebeeck and Buffalo Bill Cyril. This is a reckless delusion.

The cause of all this trouble is Kgalema Motlanthe’s High Level Panel which looked at the effectiveness of laws across a range of domains: poverty, inequality, racism, social cohesion, water rights, drug abuse and land restitution, redistribution and security of tenure. To argue, given such a sweeping purview, that it is a declaration of war to question whether the Ingonyama Trust Board is fit for purpose is nonsensical.

Let us also not forget, amid all this self-righteous belligerence, that the Ingonyama Trust Act itself is the bastard child of two dogs of war, the National Party and Inkatha, which at the time was holding a gun to the head of the 1994 democratic election. That its very legality has not been challenged is one of the mysteries of post-apartheid South Africa.

Be that as it may, the act represents a specific governance dispensation which, if it were to be dismantled overnight, and if there were no viable alternative to take its place immediately, would result in anarchy.

If it were proposed, for example, that municipalities take over all the functions that are now spread across an entire network of traditional modes and authorities, it would be a disaster. Not because it is inherently a bad idea, but because especially rural municipalities are chronically dysfunctional.

The specific, immediate criticisms of the Ingonyama Trust Board are that it is not transparent in what it does with its money, does not direct that money towards services or land administration, is colluding with speculators, amakhosi and foreign investors (including mining companies) to divest people of their land for profit, and that it is stripping people of their communal ownership of land and turning them into tenants on the very land they already own. And everyone knows what a landlord does when you can’t pay the rent.

The Ingonyama Trust has therefore assumed the full rights of a landowner, where theoretically, in terms of the Ingonyama Act, ownership of the land is held in trust on behalf of the people who live on it. This is the crux of the matter. What is being opposed is not an appropriation of land from the people by a hostile state, but a re-appropriation of land from an autocratic trust and back to the people so that they may enjoy the full rights of citizenship.

What the High Level Panel is calling for is that “the land vests in a person or body with proper democratic accountability”. In other words, that the law as it applies to the rest of the country should apply to Ingonyama land too. It’s only fair. It is the essence of democracy. It’s not going to be an easy process, because it has to bring a universal logic to centuries of destructiveness and dispossession, and more latterly venality and power-broking.

But if the broken song remains the same, the epitaph on the land of the ancestors will be the words of John Steinbeck’s anti-hero Crooks: “Just like heaven. Ever’body wants a little piece of lan’ … Nobody never gets to heaven, and nobody gets no land.” DM

Yves Vanderhaeghen is Editor of The Witness newspaper, where this article first appeared.