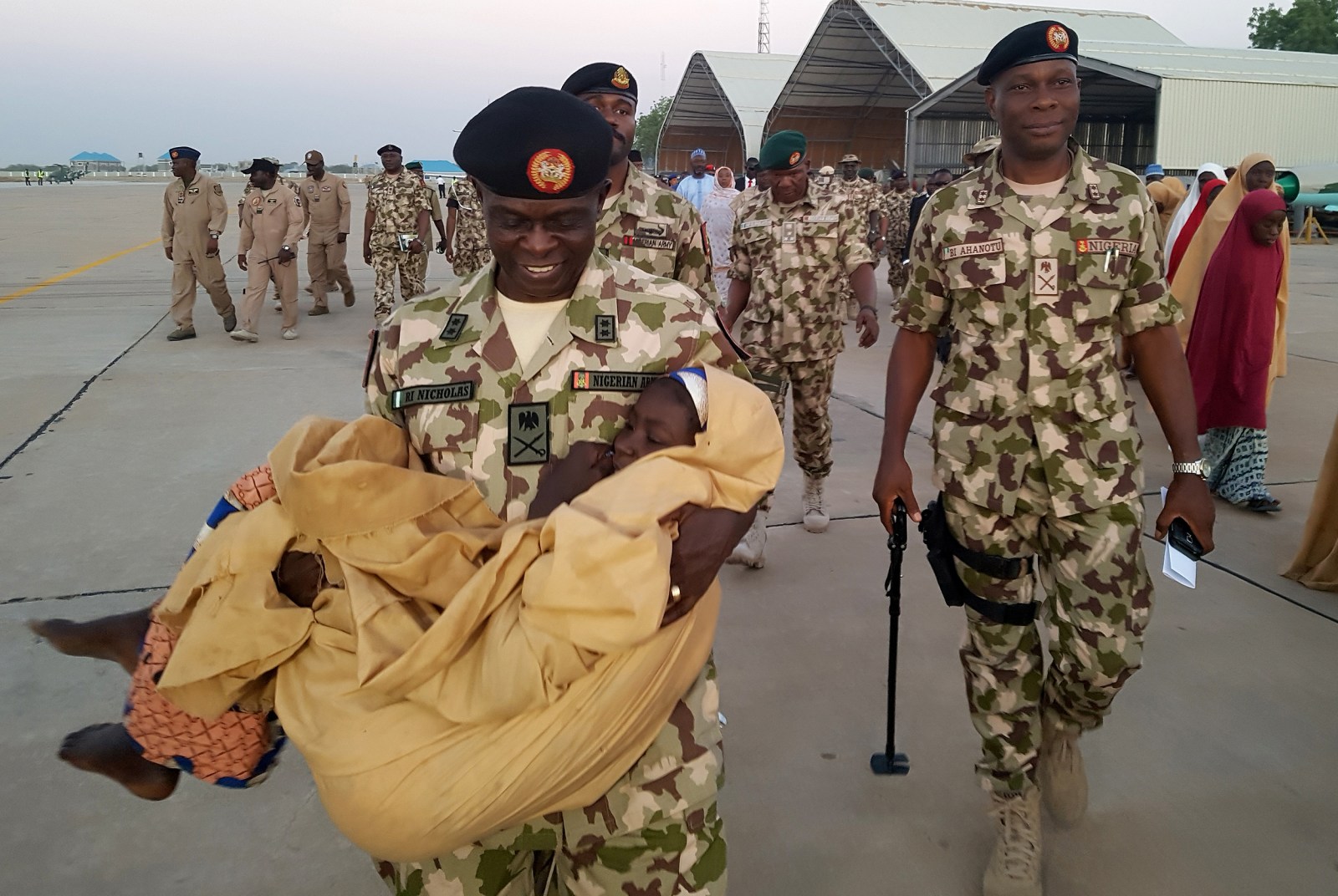 One of the released Dapchi school girls is carried as military and government officials supervise the airlift of the rescued girls at Maiduguri Airport, Nigeria, late Wednesday 21 March 2018. Boko Haram released more than 100 of the schoolgirls it abducted last month. EPA-EFE/STR

The terror group is turning communities against refugees and victims into suspects. By Aimée-Noël.

In 2017, the Global Terrorism Index labelled Boko Haram the world’s third deadliest terrorist group. Although exact numbers are unknown, conservative estimates indicate that since 2009 its reign of terror has killed more than 20 000 people and displaced more than two-million across Nigeria, while also spreading into Cameroon, Niger and Chad.

Boko Haram remains a substantial threat and has conducted a string of violent attacks so far in 2018, including the high-profile kidnapping and subsequent release of 110 school girls. Attacks by the extremist group were initially mostly aimed at security forces and it minimised civilian casualties. But its violence has escalated over time and the group’s definition of legitimate targets has expanded.

Nigerian President Muhammadu Buhari declared the group “technically defeated” in December 2015 after it suffered a series of territorial losses. In August 2016 it split into two factions, one of them aligned with Islamic State and targeting security forces. The other Abubakar Shekau faction has a more indiscriminate attack profile and is responsible for most attacks on displaced people.

An Institute for Security Studies database shows a significant rise in Boko Haram attacks on internally displaced people or refugees. In 2015 there were four attacks, expanding to 10 in 2016 and 18 in 2017.

Female suicide bombers perpetrated a significant majority of these attacks, probably because they attract less suspicion and can more easily access camps than male militants. Attacks have included explosive devices left in refugee camps, and suicide bombings of markets, schools and transport.

In one of the worst attacks in February 2016, two female suicide bombers stormed a camp in Dikwa, Nigeria, and blew themselves up, killing 58. Three women blew themselves up at a camp entrance in Konduga, Nigeria, in July 2017, killing 30. Attacks on sites housing displaced people is on the increase in Cameroon, also threatening aid workers and the vital flow of food and medical supplies. On 1 March 2018, Boko Haram killed four aid workers in Rann, north-east Nigeria, outside a camp housing 55,000 displaced people.

Boko Haram militants have also reportedly been infiltrating refugee flows and camps. In July 2017, nine insurgents and 100 accomplices were identified among a group of 920 refugees returning from Cameroon. Attackers have reportedly disguised themselves as refugees to travel into towns to purchase supplies.

Among incidents reported are militants masquerading as travellers, herdsmen, workers, hunters, preachers and sick people. In 2017, stories emerged of militants pretending to have epileptic attacks or be injured, only to detonate themselves when people gather to help. Boko Haram is known for its extreme ruthlessness and relies on fear and violence to maintain control.

A recent United Nations Refugee Agency report warned of a sharp increase in women and children being used as human bombs. In 2017 the use of children in attacks was up four times over the previous year. By August 2017, this included 83 children, mostly under 15 years and 55 of them girls, and a baby strapped to a child.

Using women and children to carry out attacks, or posing as refugees, makes Boko Haram more elusive, and has the effect of turning countries and communities against refugees, and turning victims into suspects. It increases the general feeling of insecurity and diminishes the prospect of people helping one another.

There is also a danger that Boko Haram might be exploiting and controlling mass flows of migrants as a valuable bargaining position. And it may be strategically stimulating migration to overwhelm governments. Although no evidence has been found in the case of Boko Haram, the phenomenon is well known.

In February 2016, at the height of the Europe migration “crisis”, Catherine Shakdam, political analyst and director of the Shafaqna Institute for Middle Eastern Studies, proposed that Islamic State was intentionally creating mass migration towards Europe. She wrote that “mass migration has long been exploited by devious entities as part of a new military genre: asymmetrical warfare”.  Such coercive migration occurs when a weaker challenger strategically engineers population movements to manipulate a more powerful target into making political, military or economic concessions.

Extremist groups like Boko Haram could try to use this tactic. Where resources are limited and ethnic tensions are elevated, the risk of mass in-migration can present a persuasive threat to already fragile states. Boko Haram’s ability to control migration may be used to create conflict to the point that it becomes less costly for enemy governments to concede to their demands than it does to withstand the migration burden.

In trying to understand Boko Haram’s increasing focus on “soft” targets, the distinct value of migrants and refugees to the extremist group must be considered. Policymakers must also take into account that migration strategies focused exclusively on stemming flows may in fact be strengthening the bargaining position of extremist groups like Boko Haram. DM