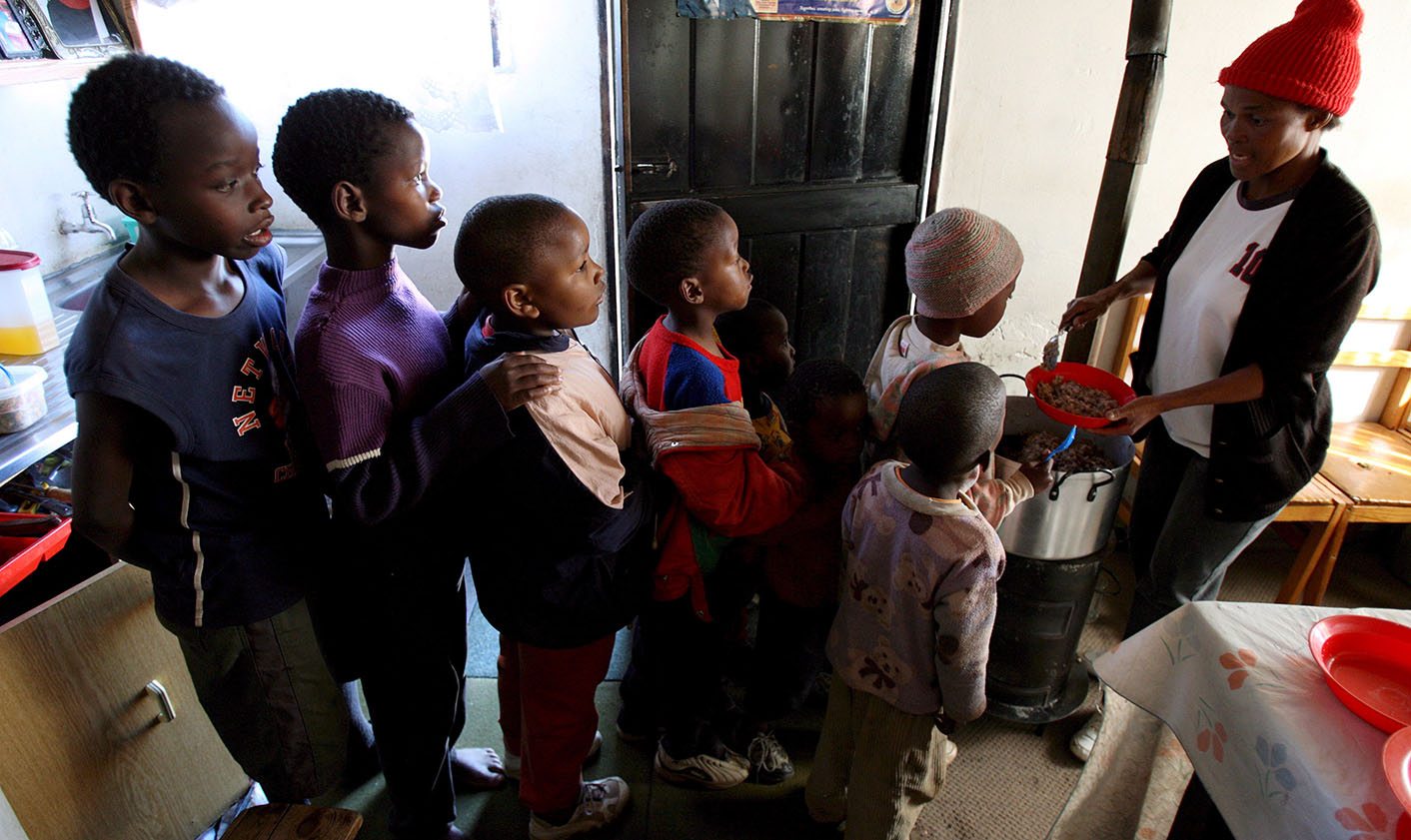 A file photograph dated 23 May 2006 shows children receiving a plate of food at a feeding scheme in Soweto, South Africa. EPA/JON HRUSA

Gauteng schools have been rocked by robberies with thieves targeting computers and food meant for the school nutrition programme. The Gauteng Department of Education has confirmed that six schools have been the victims of break-ins since mid-March and have blamed a syndicate they believe to be operating in the province. Most concerning is that learners from disadvantaged backgrounds often rely on the meals given at school. Amy Green and Piet Motaung investigate.

Fourteen-year old Lebuso Masakala’s dream is to study mechanical engineering after he completes his matric. In his last year of primary school in Botshabelo township east of Bloemfontein in the Free State, Masakala has many obstacles to overcome to make this dream a reality: the most immediate being food.

“My father is the only one working and he has to provide for six of us: me, my mother, my two-month-old sister, my younger brother who has just turned nine as well as my grandmother, and also himself,” explained Masakala.

While the robberies in Gauteng have caused concern, Dr Monokoane Hlobo, secretary general for the Congress of School Governing Bodies, has confirmed that this is a nation-wide problem.

He said some schools, including those in the Free State, struggle to keep up with the daily provision of food to learners because of “unforeseen circumstances like water and power cuts and sometimes food being stolen”.

If Amohelang Primary School, where Masakala is a Grade 7 learner, becomes a target for thieves, its nutrition programme could be compromised: as well as Masakala’s education and his ability to attain the academic success he needs to pursue his dreams.

Research shows that hunger is directly related to academic performance and can significantly impact the potential long-term success of a child.

Although there is little data for South Africa, a 2005 study from the United States published in the Journal of Nutrition showed that among six to 12-year-olds, “food insufficiency was associated with poorer mathematics scores, grade repetition, absenteeism, tardiness, visits to a psychologist, anxiety, aggression, psychosocial dysfunction, and difficulty getting along with other children”.

Among older children, not enough food was also directly linked to higher rates of depressive disorders and suicidal behaviour.

When one considers that the school nutrition programme provides at least one meal for about nine million pupils every school day, the impacts of compromising the programme could be wide-reaching. In Gauteng alone, 1.4-million pupils rely on the programme, which was one of 10 programmes former President Nelson Mandela launched in his first 100 days in office.

By the beginning of April four schools in Atteridgeville, Tshwane, had been the targets of what is believed to be a syndicate operating in the area, according to Gauteng Department of Education spokesperson Steve Mabona.

“It is especially concerning because some of these learners would depend on (the school nutrition programme) as their first and last meal of the day which means they can go on empty stomachs for a day or more,” he told Health-e News.

“Going for a day or more without a meal affects the attendance and performance of the affected learners… It will be difficult for them to comprehend anything that is taught, play with other children and, most importantly, their health conditions will deteriorate.”

According to food activist based at Wits University Dr Tracy Ledger childhood malnutrition is an “enormous problem” in South Africa with “enormous implications going down the line”.

Data from the 2017 South African Early Childhood Review, for example, found that 77% of children under the age of two are not eating a “minimum acceptable diet”.

Ledger said the consequences of this childhood nutrition crisis to society are often extremely underestimated.

A recent study on over 700 people in the United States, published in the journal of Environmental Research and Public Health, found a direct link between childhood hunger and violent behaviour.

“If you are hungry it is impossible to concentrate and to learn but the other thing we don’t talk enough about is the link to violence,” explained Ledger, adding that this should be a priority in a country with such epidemic levels of violence as South Africa.

She said this comes down to an “evolutionary response”: when one is hungry “impulse control in the brain is overridden”.

“The brain tells us not to think about the consequences of our actions because there is an aggressive focus on getting food. When children are constantly subjected to malnutrition the impulse control function in the brain can be permanently damaged and predispose these individuals to being violent throughout their lives.”

Ledger said that much of the long-term “damage” caused by malnutrition occurs in the first five years of life, and that while the school nutrition programme is important, more should be invested in providing nutritious food for younger children.

This long-term damage includes an increased risk of developing lifestyle diseases like hypertension and diabetes, and, ironically, of being obese later in life – all of which are costly not only to the health system but to society.

“We should also be focusing on delivering nutrition interventions as early as possible but the fact that thousands of children still die of starvation in this country every year shows that childhood malnutrition has much more impact on our societal problems than we care to admit,” she said.

“We spend so much money on violence and lifestyle diseases and one of the biggest solutions is solving childhood malnutrition which is not impossible to do with our resources. It’s hard to escape the conclusion that no-one in government really cares.”

Despite the fact that many nutrition experts feel that more needs to be done about childhood hunger, and earlier, the school nutrition programme remains the only source of food for many children for much of the year “and it is really disappointing that criminals are targeting our schools which are meant to benefit communities”, according to Mabona.

“The police are requested to speed up these investigations and the department is also calling on upon community members to provide information that will lead to the arrest of the culprits,” he said.

Professor David Sanders from the University of the Western Cape said that while the school nutrition programme is not the only solution to South Africa’s childhood malnutrition problem, it has the potential to help break the cycle of poverty in families.

“School feeding can alleviate poverty in the long term. Having school meals, particularly if they are nutritious, is associated with educational success and could lead to children doing better later in life,” he said.

And this rings true for Free State teenager Masakala: Besides having the opportunity to study mechanical engineering his “wish is to also be able to provide for my family in the future”. DM