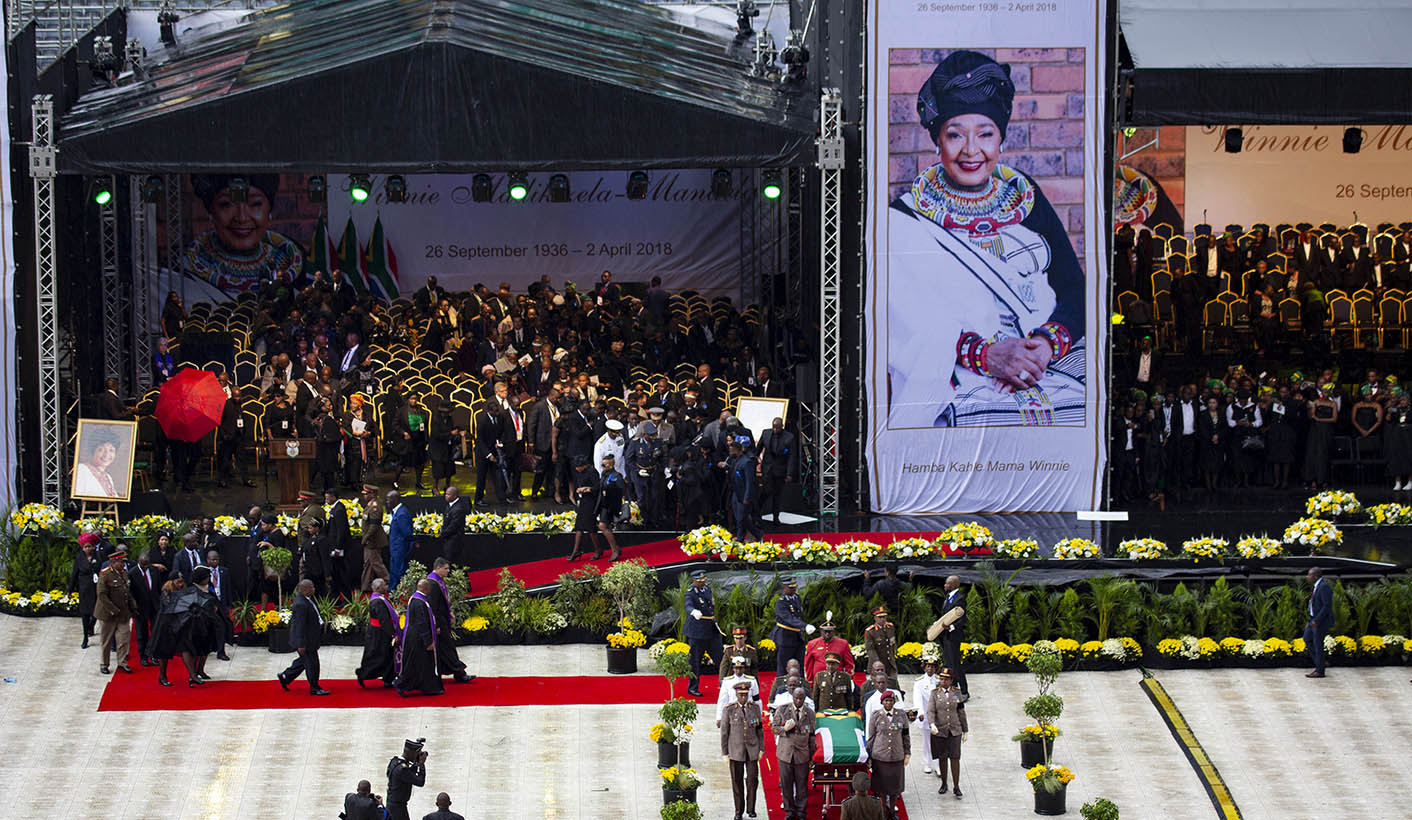 Nomzamo Winnie Madikizela-Mandela has left Orlando for the last time. Committing to her spirit of strength and defiance, speakers at her funeral on Saturday vowed to honour her legacy by fighting the many falsehoods that saw her sidelined. By GREG NICOLSON.

The heavens opened and the rain started falling moments before SANDF officials raised Mama Winnie’s coffin, draped in the South African flag, to take her on her final journey.

Tens of thousands of mourners at Orlando Stadium rose to bid farewell to the Mother of the Nation.

Debate has raged over Madikizela-Mandela’s legacy since the 81-year-old passed away on 2 April in Johannesburg. The debates, and complexities of the struggle icon are set to continue. But on Saturday, her family and comrades used her funeral to both celebrate her enormous contribution to the anti-apartheid struggle and hit out against those who campaigned against her.

“It is difficult to accept that she is no longer with us,” cried her daughter Zenani Dlamini, “because she was always so strong.” Dlamini struggled to speak before giving a moving speech honouring the example her mother set for women. The crowd, which included former presidents Jacob Zuma, Kgalema Motlanthe and Thabo Mbeki, roared in approval.

“Long before it was fashionable to call for Nelson Mandela’s release from Robben Island it was my mother who kept his memory alive,” she said, thanking the many young women who have pledged solidarity with Madikizela-Mandela since her passing.

“Like her, you show that we can be beautiful, powerful and revolutionary, even as we challenge the lies that have been peddled for so long,” she said, referring to her mother being sidelined by the ANC and much of society for her radicalism.

Apartheid security agents have gone on the record revealing the extent of their propaganda campaign against Madikizela-Mandela. Her supporters have continued to correct claims that she was responsible for the 1989 death of Stompie Seipei. She also faced heavy criticism for her infidelity while married to former President Nelson Mandela, which her daughter said would have been ignored were she a man.

“As each of them disavowed these lies, I had to ask myself – why have they sat on the truth had wait until my mother’s death to tell it?” She warned the “hypocrites” who hid the truth and marginalised her mother. “Don’t think for a minute that we’ve forgotten,” she said. Madikizela-Mandela’s contribution to the struggle must be honoured as we rediscover her history, she added.

ANC supporters made up most of the crowd at the packed Orlando Stadium, but a significant number of EFF supporters attended the funeral. EFF leader Julius Malema, who was close to the political icon, said Stompie’s mother was in the audience as were Madikizela-Mandela’s critics who distanced themselves from her and the actions of her Mandela United Football Club.

“Sell-outs, we see you,” roared Malema. “We mention these instances just to make them aware, we know what they did to you,” he said, claiming her detractors were weeping while failing to acknowledge their actions. Malema said she asked him to return to the ANC but he responded, “But which ANC do we go to?”

President Cyril Ramaphosa apologised that it had taken so long for the ANC to honour Madikizela-Mandela. “I’m sorry mama that we delayed this much,” he said, delivering the eulogy. He said he would request the ANC to confer its highest honour on her.

“As we bid her farewell we are forced to admit that as Mama Winnie rose, she rose alone. Too often we were not there for her as she tried to rise,” he said. Recalling a recent conversation with her daughter Zenani Dlamini, he said she cried when she said her mother had lived a difficult life. “Zenani’s tears revealed Mama Winnie’s wounds.”

“Mama Winnie’s life was about service, service to her people. It was a life of compassion,” said the president. Speaking on Madikizela-Mandela’s sustained activism while many ANC members were in prison or in exile, he said, “She felt compelled to pick up a spear that had fallen. It was a spear that throughout the darkest moments of our struggle she wielded with great courage.”

Ramaphosa said she defied apartheid ideology and male superiority. “She exposed the lie of apartheid.” He continued, “Yet through everything Mama Winnie endured they could not break her, they could not silence her.”

Responding to Malema, the president said, “The wounds you are talking about are real wounds but today is the time to heal those wounds.” Madikizela-Mandela had wanted him to visit Marikana, the site of the 2012 massacre, with Malema and Ramaphosa said he would go with the young firebrand “to heal the wounds”.

The funeral brought together political foes, the ANC and EFF and the stadium reverberated as they sang in praise of Ma’ Winnie, although most EFF supporters left after Malema’s speech. EFF leaders encouraged their members to act with discipline during the funeral.

Madikizela-Mandela was largely remembered for defiantly standing up to the apartheid government and relentlessly pushing the ANC’s struggle for freedom. She was persecuted by the government and suffered imprisonment, torture and banishment as she was the strongest ANC voice within the country during the struggle.

Family members, President Cyril Ramaphosa and dignitaries walk beside the casket of the late stalwart, Winnie Madikizela-Mandela as it is led out of Orlando stadium. 14 April 2018. Photo: Leila Dougan

Madikizela-Mandela’s coffin left Orlando Stadium accompanied by a military parade for Fourways Memorial Park where she was due to be buried in a private ceremony next to her great-granddaughter Zenani Mandela.

Ramaphosa finished on Saturday: “She lives on in all of us. She inspires our actions. She guides our struggles. She remains our conscience. May her soul rest in eternal peace. May her spirit live forever.” DM

Main Photo: The casket carrying the body of Winnie Madikizela-Mandela is led out of Orlando stadium as it begins to rain, on 14 April 2018. Photo: Leila Dougan