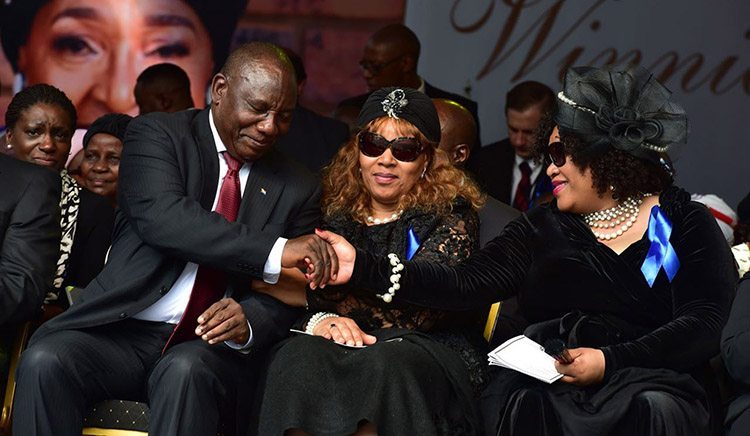 Nomzamo Winnie Madikizela-Mandela’s funeral on Saturday came at a time when the ANC faces widening cracks following its electoral conference four months ago, as well as the challenge of pulling together to win next year’s electoral conference. Quite aptly, everyone in and around the party is trying to appropriate her legacy to score political points.

It was fitting that a roaring Highveld thunderstorm broke out just as Winnie Madikizela-Mandela’s funeral service was over and her body left the Orlando Stadium for its final resting place at the Fourways Memorial Park Cemetery.

Rain is considered a blessing, but the clouds of controversy that followed Madikizela-Mandela, dogged her in life as much as it does now, in death.

The party infighting that played off during her funeral service on Saturday and in the 10 days of mourning before, was to be expected, as she was considered with ambivalence even in her own political home.

She did, however, declare she was happy with the party’s leadershipafter Cyril Ramaphosa’s election to the ANC presidency in December.

At her funeral on Saturday there was anger from her daughter, Zenani Dlamini, over the stories told of her mother in life and in death. She also tacitly acknowledged her mother was no saint by saying: “The battle for our freedom was not some polite picnic at which you arrived armed with your best behaviour.” There was also anger from the political son she favoured in her latter days, Economic Freedom Fighter leader Julius Malema. These two also got the most mileage on social media, subsequently. (Madikizela-Mandela, incidentally, had a penchant for stirring opposition politics, leaking the arms deal dossier which implicated a number of ANC leaders to then Pan Africanist Congress MP Patricia de Lille, but that’s a story for another day.)

Malema was the only South African political leader from outside the ANC to address the crowd that filled the Orlando Stadium – about a fifth of which consisted of his “Red Sea” faithful clad in party T-shirts, most of whom left the stadium after his speech.

Talk is that Madikizela-Mandela was the only person who could still have persuaded him to return to the ANC after he was expelled in 2012.

ANC elections head – and the ANC Youth League president who handed over to Malema – Fikile Mbalula, speaking “on behalf of the country’s youth”, told Malema to “come back home” as Madikizela-Mandela had asked him to.

He wasn’t quite a match for Malema as he said: “Land expropriation without compensation, we are on it.”

He acknowledged former presidents Thabo Mbeki and Kgalema Motlanthe, and Ramaphosa, but left out Jacob Zuma, just as he snubbed Mbeki when he was rooting for Zuma in 2008.

“Your organisation had been rendered incapable of loving you back,” he said, addressing Madikizela-Mandela as “Mama”.

He continued by laying into those in the freedom struggle who criticised her for being linked to the death of child activist Stompie Seipei.

“Mama, some who sold you out to the regime are here,” he said, to wild cheers from his crowd, “and what is funny, Mama, is that they are crying the loudest, more than all of us who cared for you,” he said, in effect accusing others of trying to make political capital out of Madikizela-Mandela’s legacy.

“Mama, the UDF [United Democratic Front] cabal is here, the cabal that rejected you and disowned you, and sent you to the brutal apartheid regime, is here,” he said, saying the UDF had no need to dissociate themselves from her, because she was a member of the ANC and not the UDF.

“Why did the UDF see the need to dissociate themselves from someone who is not a member. I’m waiting for a signal, Mama,” he said. This kind of signal could come in handy when the EFF is waging its elections campaign against the ANC.

Malema also criticised a faction led by late struggle stalwart Adelaide Tambo who resigned from the ANC Women’s Leaguein 1995citing Madikizela-Mandela’s “undemocratic decision-making and lack of accountability”. One of those, Defence Minister Nosiviwe Mapisa-Nqakula, conducted Saturday’s ceremony and had introduced Malema as a speaker.

“All of those who resigned from the ANC Women’s League because they said they cannot be led by a criminal, they are here, some of them are here to play a prominent role in your funeral,” he said. “Mam, I’m waiting for a signal on how we should treat them. We see you in your beautiful suits, betrayers, sell-outs, we see you.”

After assuring a giggling Ramaphosa of the EFF’s support on the strength that Ramaphosa headed Madikizela-Mandela’s ANC, the ever-inconsistent Malema hauled up the ghost of Marikana. Thirty-four miners were shot dead by the police in 2012 and Ramaphosa apologised in one of his first speeches as president during his reply to the State of the Nation debate in February for his part in it as non-executive director of mining company Lonmin.

“The widows in Marikana are crying. What do we tell those widows of the miners of Marikana who killed for selfish profits? Those who isolated you in Marikana, they are here,” he said.

Malema has previously riled against Ramaphosa and then ANC secretary-general Gwede Mantashe for being key in the disciplinary process that led to his expulsion.

Mantashe, speaking as ANC chairperson, said: “When we came to this funeral we were locked in a room. We were told one of the worst things we can do as leaders of the ANC is to use the funeral to fight battles. Funerals are about celebrating the lives of the people that have departed. It’s about mourning. We are here to mourn and celebrate, because if we use this platform to open up wounds, we are going to hurt more people in the day of the departure of Mam’ Nomzamo.”

His words came after more than a week of mutual accusations by ANC factions, from the blame laid at ANC secretary-general and former Free State Premier Ace Magashule’s door for the money that went missing for the renovations to Madikizela-Mandela’s Brandfort home, to mud-slinging between party leaders leaders after ANC Youth League president, Collen Maine, said North West premier Supra Mahumapelo had introduced him to the Gupta family, with all the subsequent consequences.

The memorial services were even used as a platform by Zuma, who was likened by Bishop Timothy Ngcobo in Durban this week to Madikizela-Mandelafor the way the ANC ousted him from the presidency in February.

Mantashe, at the funeral, talked politics anyway, saying: “We must unite the ANC. A united ANC is better. A united ANC is strong. A united ANC cannot be defeated.” He spoke about the party having a “new energy” this year, which would be one of “unity and new jobs” – coinciding as it is, with an elections campaign year.

Mantashe also said the ANC itself should commit to the renovations of the Brandfort home, in what was possibly a side-swipe at Magashule.

Ramaphosa’s eulogy took aim at the rifts that opened in the governing party as well as in the country following Madikizela-Mandela’s passing.

“In death, ” he said, “she has demonstrated that our many differences along political party and racial lines and the numerous disputes we may have, are eclipsed by our shared desire to follow her lead in building a just, equitable and caring society.”

In an off-the-cuff remark at the end of his speech, Ramaphosa also sought to neutralise Malema’s remarks on Marikana, by saying Madikizela-Mandela, at her 80thbirthday party (in 2016), said she would take him and Malema to meet the widows of the departed Marikana miners.

“We could not go, because you were not well,” he said, addressing Madikizela-Mandela. “You are gone now, I’m left to go alone, but will be guided by your spirit. As you said, and I know, that Julius Malema will go with me so that we can go and heal the wounds of the Marikana widows.”

Ramaphosa also promised to posthumously bestow on her with the ANC’s highest honours, the Isithwalandwe/Seaparankoe award.

The passing of her former husband in December 2013 provided a much-needed push to the ANC’s general elections campaign then. Madikizela-Mandela’s death has stirred deep political feelings, and in effect has similarly kicked off what could be a tough elections campaign year for her party. DM