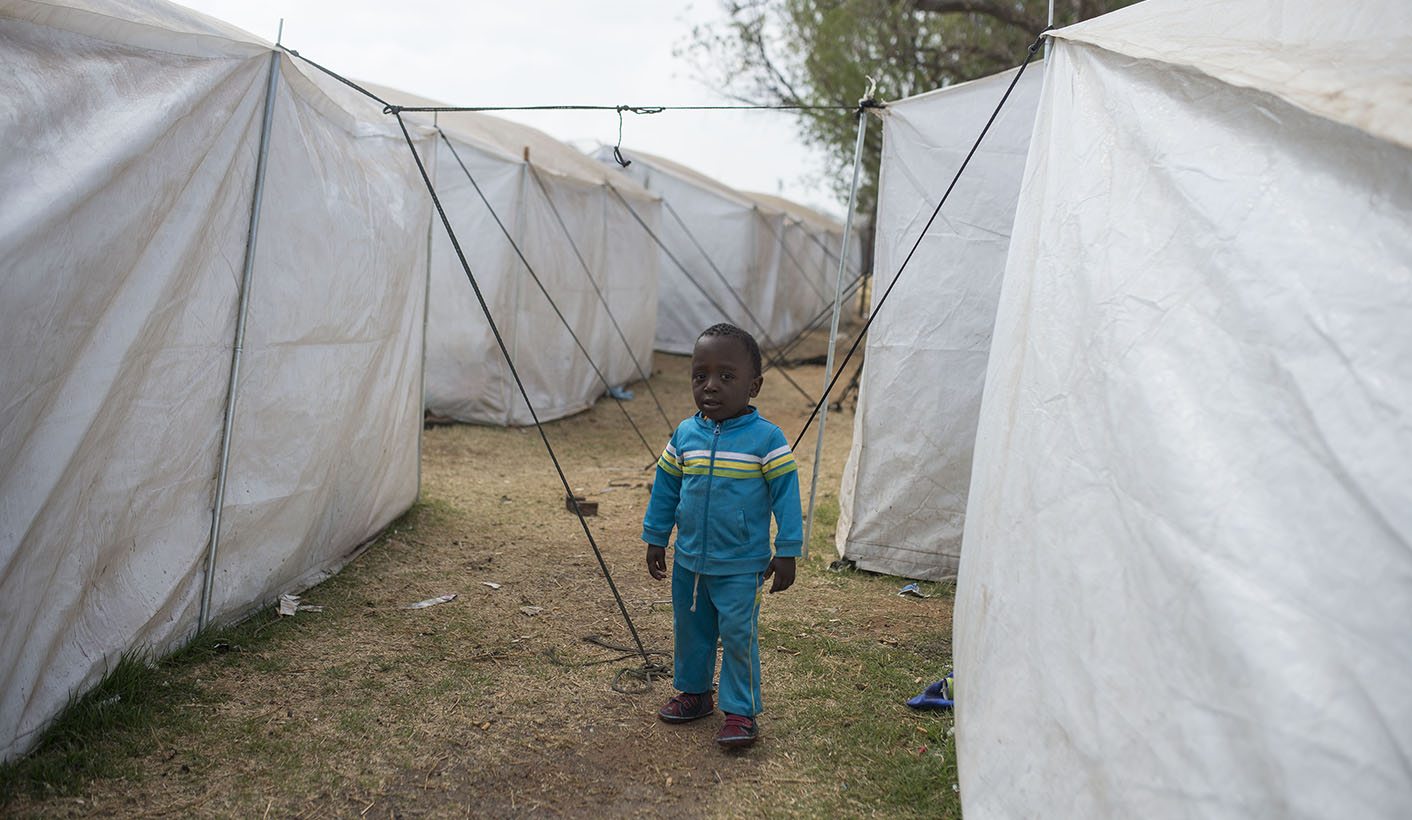 Three children died when a building partially collapsed in Doornfontein on Monday. They should have been moved to safer housing months earlier, but no one wants to take responsibility. By GREG NICOLSON & BHEKI SIMELANE.

Tholakele Zuma’s room has no bed. Even if she could afford one, there’d be no space. The only furniture she owns is a wardrobe and an old television set. Her door can only open partially as the room is too cramped for it to swing the whole way.

One of her neighbours came in to retrieve a new black belt, the price tag still attached, from the wardrobe while Zuma wept. Her son, six-year-old Nqubeko Ngcobo, had bought it ahead of returning to school this week.

Nqubeko was one of three children, aged between three and 10 years old, who died when their derelict building in Doornfontein, Johannesburg partially collapsed on Monday.

Up to 100,000 people are believed to live in abandoned buildings in Johannesburg, many in unsafe buildings, and the disaster at 39-41 Davies Street highlights just how vulnerable they are and how little is being done to protect them.

“No one cares about us here. They will come when they want votes. Officials were here in suits yesterday but they didn’t even call us together as a community. We have been asking for accommodation for years,” said resident Nokuthula Khumalo.

“Sisi’s eyes were popping out.”

Residents should have been moved long ago. Court action regarding the building dates back to 2012, when the owners obtained an eviction order that required residents to move out within 48 hours into the property owners’ other buildings.

It’s unclear what happened in the following years, but residents had heard they were to be evicted and in 2016 approached the Socio-Economic Rights Institute (SERI). The building is in an awful state and its structural integrity is clearly compromised. Zuma’s room has no electricity, no water, and no ablution facilities.

The residents were willing to move to neighbouring buildings, but despite the owners’ promises, the relocation never occurred and the property owners’ lawyer told SERI that despite their promises, the commitment wasn’t feasible.

The owners brought another court application in 2017 in an attempt to evict the occupiers without following the proper procedures.

The application failed, but the court ordered the City of Johannesburg to convene a meeting with all stakeholders involved to discuss health and safety issues in the buildings and chart a way forward. SERI convinced City officials to provide residents with alternative accommodation and they then did an audit to see which residents qualified for assistance.

Mayor Herman Mashaba’s office had already conducted an audit on the properties of 39 and 45 Davies Street and found residents were paying on average R600 a month in rent.

“The properties are in degraded state with no proper services and as such these building appeared unsafe, slum-like and potentially unfit for human habitation,” read the report. It recommended residents be provided with housing assistance.

SERI essentially blamed the municipality for the death of the three children.

“In July 2017, City officials produced a report for Mayor Herman Mashaba strongly recommending that the residents be provided with alternative accommodation. The City did an audit of the residents in August 2017. Yet, for eight months thereafter, the City has taken no steps to provide the residents with a safe alternative.”

Mashaba’s administration blamed SERI. The mayor’s spokesperson Tony Taverna-Turisan said alternative accommodation could not be provided to residents because SERI had frustrated the process by repeatedly postponing the final site inspection and audit of residents.

“It is evident from correspondence between SERI and the City’s lawyers that we have been trying for months to get SERI’s assistance with completing the occupancy audit at this building, yet SERI has been non-responsive,” he said.

Daily Maverick has seen the emails repeatedly calling on SERI to assist the City to relocate residents.

SERI’s director of litigation, Nomzamo Zondo, however said the correspondence dealt with a large number of buildings, not just 39-41 Davies Street, and the municipality was trying to divert blame.

“SERI was always very clear with the City that the urgent need was to relocate people from 39 to 41 Davies Street. The other properties could wait,” she said.

“The City had all the information it needed about the building that mattered. Even in respect of the properties where the audit had not been completely finished, and where the health and safety situation was not as acute, the City was not under an obligation to wait for SERI before it acted. But it generally never does act unless SERI or other public interest NGOs place it under pressure to do so.”

Since coming into power in 2016, Mashaba has made inner-city regeneration a priority, targeting dilapidated or hijacked buildings that he hopes can be refurbished with the help of the private sector to boost the city’s economy and help provide affordable housing.

While struggling to meet housing demand, the municipality also faces strict requirements necessitating it to provide temporary emergency accommodation to poor residents facing eviction. Thousands of people are at risk of losing their homes as the City leads raids on dilapidated buildings and SERI says the municipality is not prepared to assume its responsibility of providing alternative accommodation.

Taverna-Turisan said the DA-led administration had increased the temporary emergency accommodation budget from R15-million under the ANC government to R31-million this year and R100-million in the medium term.

“It is evident that under Mayor Herman Mashaba, this administration is serious about addressing this backlog and attempting to bring dignity back to our poorest residents,” he said.

Mentioning multiple projects aimed at improving temporary emergency accommodation, Taverna-Turisan said the municipality has limited resources and relies on the provincial government for housing grants while facing a housing backlog of an estimated 300,000 units.

“It is also vital for people to understand the extent of the challenge the City of Johannesburg is facing. It can be described as nothing less than a crisis, which requires the different spheres of government as well as civil society and relevant stakeholders to work together to find lasting solutions in the best interests of our residents,” he said.

Mashaba’s focus on the inner city has been on raiding abandoned or hijacked properties and either working with owners, or potentially expropriating properties, and encouraging them to refurbish buildings to help clean up the CBD. SERI however says the City wants to evict poor residents without offering them an alternative and it doubts the City’s claims on its ability to provide alternative accommodation.

Zondo said Mashaba’s administration has done nothing to provide temporary emergency accommodation, “unless you count 21 tents that the former occupants of the Cape York and Fattis Mansions properties have been living in for months now, while they wait for proper units to be provided”.

She said this administration, like the last, only responds to court orders rather than relocating those in need, such as the residents of the Davies Street building.

When residents were evicted from Fattis Mansions in 2017, the City provided them with tents at Wembley Stadium. Some are now live in shipping containers.

“The City is also currently compiling a plan to release and upgrade the temporary emergency accommodation facilities that it constructed in previous years but that then became unmanageable,” said Taverna-Turisan.

Residents of the building on Davies Street no longer trust the municipality. They’re willing to move but would rather stay within their frail walls than move into tents. For now, that’s their most likely destination. Three children have died, but the dispute between SERI and the City has shown that more people will probably die, or continue to suffer in inhumane conditions, as the poor are neglected. DM

Photo : A child plays between the many white tents that constitute the Wembley camp. There are approximately around 20 small tents and one large tent which houses evicted residents from the Fattis Mansions building. Photo: Ihsaan Haffejee