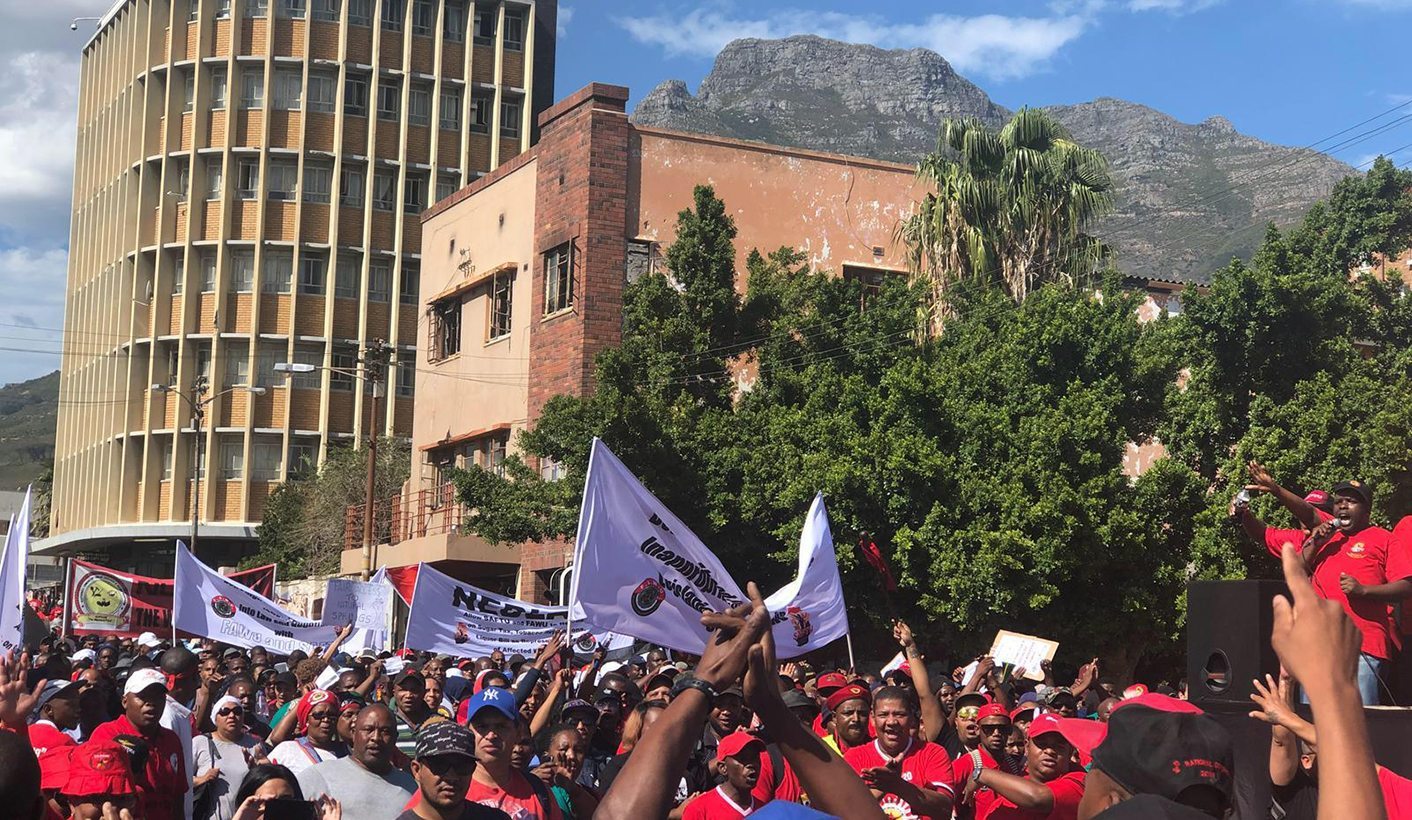 The SA Federation of Trade Unions (Saftu) Western Cape marched to Parliament in a call for action to reject the new national Budget which increased VAT by 1%, the implementation of the new national minimum wage, and the privatisation of water. By HLUMELA DYANTYI.

The South African Federation of Trade Unions (Saftu) marched from Keizersgracht in Cape Town to Parliament in protest against the National Minimum Wage, which was due to be implemented in May, but whih has been delayed.

Saftu members were joined by other organisations such as the National Union of Metal Workers of South Africa (Numsa), Water Crisis Coalition (WCC), Housing Assembly, #FeesMustFall and others.

In memorandum, it claimed that the new National Minimum Wage – where most workers will get R20 an hour and which will replace current sectoral determinations – would entrench a “poverty minimum wage”.

Saftu claimed that this deal will restrict protesters’ rights to strike and collectively bargain and that the new minimum wage will aggravate the financial burden for working-class citizens.

Saftu, a national trade union body founded by former Cosatu leader Zwelinzima Vavi in 2017, complained that the deal does not address the high salaries of CEOs and politicians.

The protesters also rejected the increase in , the City of Cape Town’s proposed budget and the instalment of water devices in people’s homes.

Majola accused politicians of passing budgets that were in favour of councillors and at the expense of the poor.

“They (ward councillors) wouldn’t be there without us. They drive their fancy cars and live in fancy houses while we struggle. Even this Day Zero, there’s no Day Zero at the hotels, I’m sure their are full while you have no water. They’re punishing us for #FeesMustFall. They declared war on us, we will fight back,” Majola shouted to the crowd.

Western Cape Saftu secretary, André Adams, said that the VAT increase is regressive and the government should consider rather increasing personal income tax and corporate tax.

“Our corporate tax is sitting at 26% right now and that is one of the lowest in the world. Did you know that it was higher during apartheid, it was 45% back then,” Adams said.

Adams added that it was not fair that there are only 30% zero-rated goods in the food basket of a working-class citizen yet not enough is being taxed from the elite. The increase in the price of food is not only affected by VAT but also by the fuel levy increase as the food needs to be transported to the shops.

Gribi, an River resident, pleaded with to freeze increases for the next three years.

“They come into your house while you’re not there, they install these blue metres without your consent or signature,” she said.

The Water Crisis Coalition complained that the working class in Cape Town now have to pay five times more for water than they did before.

The protesters marched to Parliament where their memorandum was signed by a parliamentary representative.

National strike action by the same groups is due to take place on 25 April 2018. DM

Photo: Saftu and other organisations march to Parliament to show their disapproval to the labour law amendment, national minimum wage and protest against the water management crisis. Photo: Kamilah Tom