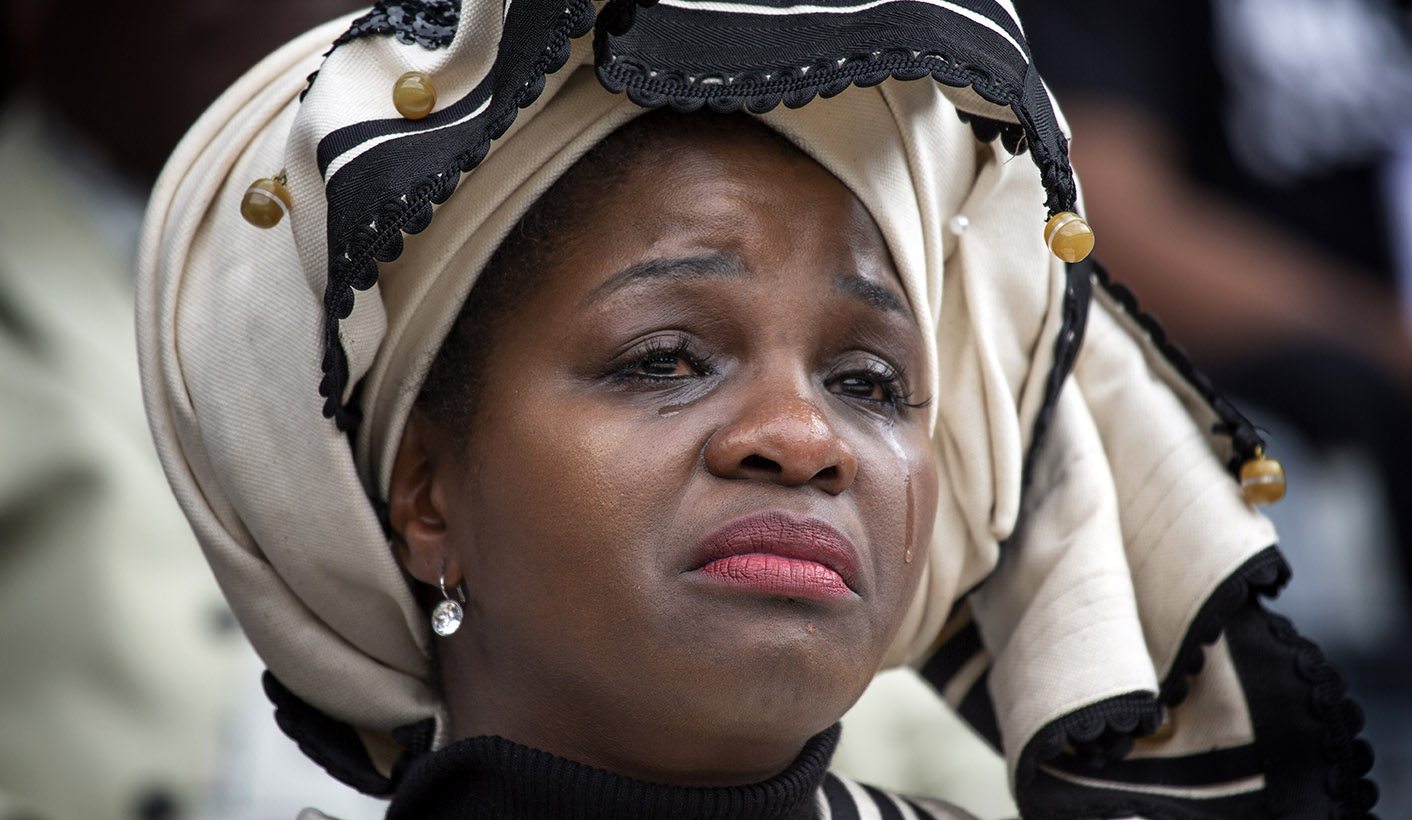 It is fitting that the two biggest events to pay tribute to the life of Winnie Madikizela-Mandela will both take place in Soweto – the township to which she remained loyal throughout her life. Wednesday saw thousands flock to Orlando Stadium for a government-organised memorial service at which a spirit of celebration prevails throughout the mourning. By REBECCA DAVIS.

That was the cry that echoed around Orlando Stadium on when a venue more often used for soccer games played host to the memorial service for Winnie Madikizela-Mandela.

At the official kick-off time of , the stadium was still marked by empty stands. By noon, however, the clouds had cleared and Orlando Stadium had filled to around the halfway point.

Photo: Mourners from the ANC and the EFF gather at Orlando Stadium for Winnie Madikizela-Mandela’s memorial service on Wednesday, 11 April 2018. Photo by Leila Dougan

There was an element of political segregation in the seating layout. In one stand, the green blouses of the ANC Women’s League dominated. Above, Inkatha Freedom Party (IFP) supporters had commandeered a stand in anticipation of an address from Mangosuthu Buthelezi.

And then there was an EFF contingent, who arrived singing their own songs hymns. While the EFF leadership were running their own memorial for Madikizela-Mandela in the Free State town of Brandfort to which Winnie was exiled, other Fighters opted to head for Orlando Stadium bearing a banner on which Madikizela-Mandela was painted as a queen.

Their presence was acknowledged by event chair Nomvula Mokonyane, who may be a questionable Cabinet Minister but turns out to be a killer MC.

“Can we get the EFF to lead us in a revolutionary song?” asked Mokonyane at one point, neatly embracing them in events.

“She thinks she is above the movement,” grumbled a man in the stands.

But Mokonyane was an efficient and commanding presence as MC, keeping the programme moving while injecting the necessary spirit to lift energy when it flagged.

The official funeral for Madikizela-Mandela takes place on Saturday, at which President Cyril Ramaphosa will speak. Wednesday’smemorial attracted a rota of less high-profile speakers: old comrades, family members, and representatives of political blasts-from-the-past like Azapo and the PAC.

“Big ”, as they called Madikizela-Mandela, was described as kind and smart.

“Thank you for being the greatest gogo,” said one tiny speaker.

“She was the kindest woman I knew and she loved me too,” concluded the littlest great-grandson.

There were moving and personal words, too, from Madikizela-Mandela’s grandson Bambatha Mandela.

Mandela told the story of how he had once asked his grandmother why she did not move out of the township and buy a house near his, in a more affluent area.

“I don’t think I’ll be able to sleep,” Madikizela-Mandela told him – “and even if I do, I don’t want to wake up next to my enemies”.

Bambatha Mandela had harsh words for those who have been critical of Madikizela-Mandela since her death, saying that such “defamatory” remarks would not be tolerated. The crowd roared their agreement.

There were some odd touches – such as a speaker who railed against drug lords. Unifying everything, however, was music.

“There is no-one like Winnie Mandela,” the crowd sang.

ANC Treasurer-General Paul Mashatile commended the audience for the upbeat spirit in the air.

“This is a celebratory mood, and that’s how we’re going to bid farewell to uMama,” Mashatile said approvingly.

A humorous note was injected by Madikizela-Mandela’s personal assistant Zodwa Zwane, who referred to her employer as “a mother, a friend, a boss”.

“You wish,” was the disbelieving answer Zwane received.

Zwane also spoke of the shock that accompanied Madikizela-Mandela’s death “when we least expected it”.

Just days before her passing, Madikizela-Mandela was leaving Zwane voice messages asking for advice on how to match her pink nail varnish with her church outfits.

But Zwane also testified to Madikizela-Mandela’s sense of isolation and betrayal late in life, saying that EFF leader Julius Malema was correct in his assessment of this.

Proceedings were continuing at the time of publishing this report. DM

Photo: Gandhi Baai, Winnie Madikizela-Mandela’s niece sheds a tear at the memorial for the ANC stalwart at Orlando stadium in Soweto on Wednesday, 11 April 2018. Photo by Leila Dougan