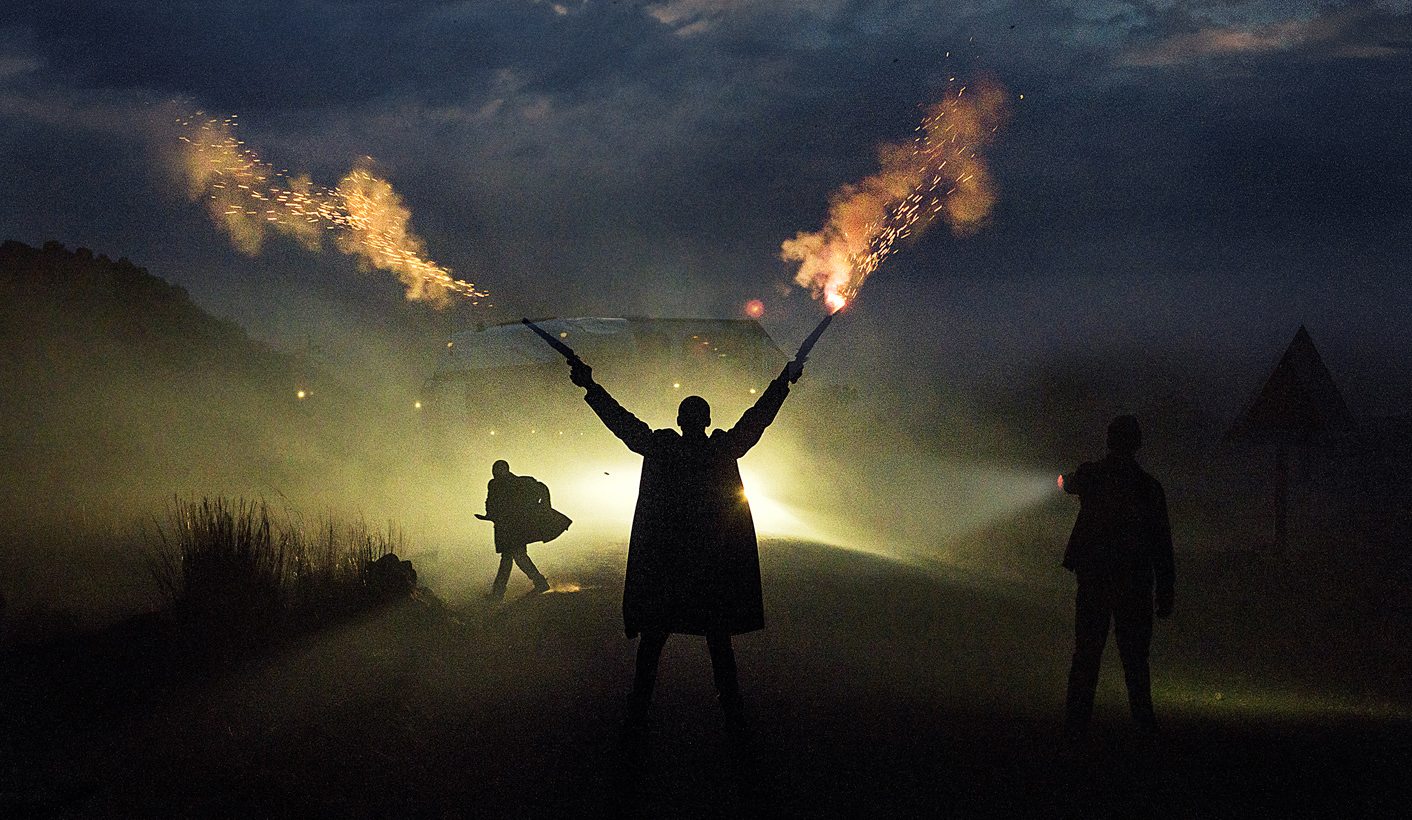 A gun-slinging Western, in Sotho, shot in small-town South Africa. Sounds unlikely, but “Five Fingers for Marseilles” has already received critical acclaim at major festivals in London and Toronto and an award nomination in Cleveland. If you missed the Daily Maverick special screening, you haven’t missed out yet. The film has only just opened in South African cinemas. MARELISE VAN DER MERWE caught up with the filmmakers.

Late in 2009, writer Sean Drummond and director Michael Matthews were travelling through the Eastern Cape and Free State. They say two things struck them.

First, the area – with its sweeping plains and rocky outcrops – reminded them of the landscapes of classic Westerns.

Second, the names and character of the tiny towns in the surrounding areas – Rome, Barcelona, Hamburg, Berlin, Marseilles – were an incongruous throwback to the history of the colonial settlers; a poignant reminder of their surviving legacy.

The area was remote. Some of the villages were connected by nothing more than a train line, comprising just a station, a trading post, hotel and post office, frozen in time. The larger towns, the film’s production notes point out, were often “not more than a few city blocks in size”, and even then, “the hub of town was traditionally a white space, with the local indigenous peoples of the area relegated to townships, workers’ quarters and tin shack shantytowns, often with poor or no water supply, ablutions, power or basic services”.

“The death of these towns,” they write, “began long before the fall of apartheid, with the train lines becoming obsolete, replaced with highways and a bigger focus on city living. After the advent of the new South Africa, many of those towns completely faded away, and in their place, townships began to rise up…”

The themes struck Drummond and Matthews as all too familiar. For storytellers, this was a place for a Western. It was a place where the Western archetypes would fit like a glove.

“A lot of the Western themes are true to South Africa,” adds Matthews.

“We are wrestling with the past, the history of colonisation, with settlers who took the land. But what’s nice about doing it through a genre film is that it’s not confrontational. It’s more relatable when the characters are archetypal.”

Enter Tau, the Lion of Marseilles. In apartheid South Africa, the community of Railway suffered under brutal police oppression. Tau and his four friends, the young Five Fingers, were the only ones brave enough to stand up to them. But one day it went too far, and Tau – still a child – lost his cool and killed two policemen. He fled, leaving his friends behind, triggering a conflict that would leave both the Five Fingers and his community broken.

Two decades later, Tau is released from prison, a hardened and brutal outlaw, widely feared. He returns home to a seemingly peaceful Marseilles, to find his friends have taken their places as prominent members of the community. Tau, the prodigal son, is not welcome.

But all is not as it seems. Marseilles is under the control of a terrifying new threat: The Ghost, or Sepoko, as he is known in Sotho.

Five Fingers was the best part of a decade in the preparing, but in the end, it was shot in just five weeks. Prior to shooting, there was the painstaking process of preparing the script, given that it was originally a) much longer and b) had to be translated into Sotho.

To create the Sotho script, the English was first translated into a draft by translator Mamokuena Makhema, after which each actor had the opportunity to work with their own lines. Different dialects are represented according to who each character is and where they are from, which will be lost on English viewers but not Sotho speakers, says Drummond. All but the villain, that is.

“Sepoko kind of has his own language,” he says.

According to Drummond, the ghostly Sepoko speaks an old, poetic version of Sotho that few people still understand – akin to Shakespearean English.

Sepoko drifts through the story, a terrifying manifestation of what occurs when we look away from what must be challenged.

The film shoot was gruelling. The actors – some of whom had been cast as early as 2011 – were performing in remote areas, sometimes in sub-zero temperatures, and working every day in order to complete the film in time. Budgets were tight; there was no time to reshoot, so there was no margin for error.

“The scenes don’t feel rushed, but that atmosphere contributed towards the intensity of the film, I think,” says Matthews.

“We hadn’t been sitting in traffic on our way to the set. Nobody had a star trailer. They had been in a badly insulated tent, or maybe in a car with the heater on full blast.

“We were shooting in sub-zero nights, sometimes even sub-zero days. We’d get stuck on the way to locations, because the roads had been washed away or frozen. You don’t have time to play around. It was really tough.”

Alongside the well-known actors, the filmmakers cast all the supporting roles from the town of Lady Grey, because there is an arts academy there.

“We found kids who were amazing. A lot of the interesting bit parts came from the town as well: the police force, the runners in the gang, the church congregation – so that was really fun, being able to work with the town and run acting boot camps,” says Drummond.

But, Matthews adds, for the professional actors it was also an opportunity. In South Africa, the film and television industry is still growing. There aren’t always many chances to do work where there is strong character development or really test limits, says Matthews.

“They knew we were trying to do something really good.”

This is where the trouble lies, says Drummond: the film was largely internationally funded, and it had more funding than many other local films. But even so, the budget was tight. It’s a Catch-22: for the South African film industry to grow, we need viewer support. But you can’t expect viewer support if you’re not providing films that can compete with international standards.

And yet it’s clear there is no shortage of talent. South African films are making their mark internationally on an annual basis; it’s no longer strange or unexpected. Most recently, Inxeba (The Wound) and Revolting Rhymes spring to mind.

“People are starting to ask, ‘What is South Africa up to this year?’ at the festivals,” says Matthews.

For Drummond and Matthews, the key with Five Fingers was to experiment with making a genre film, but to go beyond pure entertainment. They were surprised by how many viewers – locally and internationally – responded to the layers beneath the surface, or said they wanted to watch it twice.

“You want people to be entertained by the genre, but also challenged,” says Drummond. “I don’t think we expected people to respond to the bigger themes so much. A lot of the conversation has been: ‘What does it mean?’”

This, the filmmakers say, validates their decision to package some of the country’s trickier social and political themes in a recognisable, digestible form.

The film is violent, which one might expect from a Western. (There’s a lot of shooting, after all.) But the violence in Five Fingers is handled a little unexpectedly. It’s not stylised, which catches the viewer with their defences down. It packs a punch.

They didn’t want the violence to be gratuitous, the filmmakers say.

“If you go too much in the action direction, it has no value to it and doesn’t mean anything,” explains Matthews.

“Then the integrity goes out of it. If you feel it, and it hurts, there is value to it.”

This was one of the key points for them: not glorifying or glamourising the violence that has become endemic in South Africa.

“It’s about breaking the cycles of violence we have here,” says Drummond.

“It is allegorical. We are doomed to keep making the same mistakes. The characters are products of the violence done to them as kids. So the question you are left with at the end is: ‘How do we break this cycle?’ Part of it is to protect kids. Don’t repeat that mistake.”

This, too, is an idea they had from the beginning: “That this would be the cycle of the story,” adds Drummond.

“The characters must face each other, face up to everything they have done. This is what is meant by toxic masculinity – when you feed off your ego into other areas. You become, inadvertently, a lot of the things you were fighting against.” DM