Book Extract: Sorry, Not Sorry – experiences of a brown woman in a white South Africa 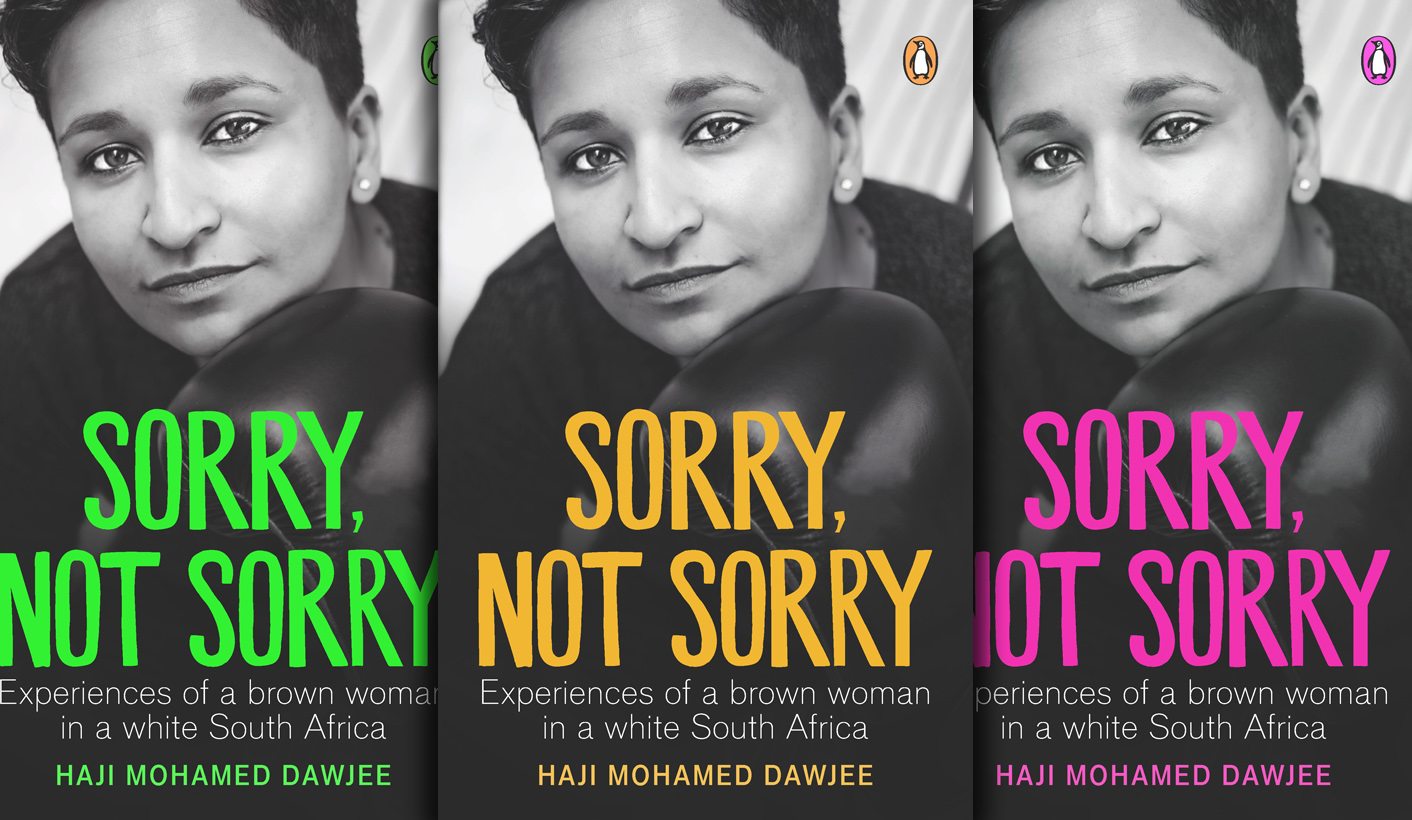 In Sorry, Not Sorry, HAJI MOHAMED DAWJEE pulls no punches when examining the social landscape: from arguing why she’d rather deal with an open racist than some liberal white people, to drawing on her own experience to convince readers that joining a cult is never a good idea. In this extract she wonders what it would feel like to move through life as a white person.

Begging to be white?

I often wonder what it would feel like to move through the world as a white person. Actually, that’s a lie. I know what it would feel like: easy. It would be so simple. The rules would be my own. The consequences of my actions minimal. My ambitions would be my own as well. They would not be a product of this incessant need to prove myself. I could have as little or as much ambition as I wanted. I would owe the world nothing, yet benefit from the hard work of everyone else. I would carry great pride and no guilt. Entitled to a fundamental right. That right would be power. An embedded kind of power. Its existence established long before my grand entry into the world, its endurance seemingly eternal. I could be as negligent as I wanted, bathe in my own ignorance and have little to complain about, but complain nonetheless just because I could. Now isn’t that a charming little universe?

I’ve given it some thought and here’s what I would do in that charming universe.

I would walk around barefoot

Not bothering to put shoes on would be a great time saver. And prancing around in your bare hooves is a great cost saver. When white people don’t bother with shoes in public, they’re never judged for it. If I stood in the pasta-sauce aisle at a fancy grocery store as my authentic self, bare heels firmly on the ground, a lot of people would be physically disgusted.

It’s economics. And it’s racism. A shoeless person of colour in a fancy grocery store surely does not belong there and is probably trying to steal. But white people can go forth and conquer without shoes. I’ve even seen a white person shopping barefoot in Hyde Park, a fancy marble-laden shopping centre in Johannesburg. This person was not buying shoes, obviously. If I were white and didn’t have to bother with the cost of shoes, I would also shop at Hyde Park a lot more.

I would always ask to speak to the owner

You know what happens when I go shopping? I throw a lot of money away. Why? Just to prove I can. I can’t even count the number of times I have been harassed and stalked by store attendants because of the assumption that I could not afford their clothes. So what do I do? Stuff like this: “Give me one in every single colour.”

“Yes, I am sure. I will also take 100ml of the Versace, the Armani and the Hermès. I feel like the French deserve my money too. Thank you kindly.”

Now, if I ever encountered that degree of churlish behaviour while shopping as a white person (it never happens to white people, but bear with me), I would – instead of blowing cash – always ask to see the owner of the store. Why? Because she or he is going to be one of my tribe. I would have the confidence to do that. I would be so sure that the white owner would demand I be treated with respect. I would probably get an apology, and a free 100ml bottle of perfume over and above the discount I’d receive on the bottle I was willing to pay for. Most of all, my skin colour would automatically make my money more welcome and reaffirm my platinum financial status.

I would own an empire of socks… or something

Do you know how much it costs to rent a store in an upmarket mall with marble flooring and pillars made of blood diamonds? Do you know how much profit you have to make selling socks (for example) to pay that rent? White people do, and they don’t have to care about it.

If I were white I would open one of these sock businesses. And when I say one, I mean at least one store in each province. White people aren’t rich. They are wealthy. They have something called generational wealth.

Generational wealth means I would never have to worry about “risk in the hope of profit”. My sock or hankie or “single gloves for the left-handed man” business would thrive because my generational wealth would see to the fact that everything is paid for upfront, no debts. And after all the start-up costs, I would still have money left over for further expansion. Mostly, I would have fat stacks left over to make everything look cool. My shit would look swanky as hell, and everyone would trust the quality of my products because I was white.

I’ve been told on one or two occasions that my general style can be described as ‘heroin chic’. I think that mostly has to do with the fact that I never make an effort to pair things and I’m a bad sleeper so I always have dark rings under my eyes. It’s an involuntary style, really.

If I were white though, I would embrace trends like these intentionally. Like the boho-chic trend, for example. I would boho-chic my way through life so hard without ever having to worry about the fact that I look poor. I would totally pull off boho-chic, hobo-chic and vintage-retro-postmodern-vagrant-sartorial-fleek (or whatever else is cool these days) with the absolute confidence that not a single person doubts the fact that I am extremely well off. I would not even have to wonder about whether or not people were aware of the fact that all my fashion choices were purchased with tons of money, so it’s all good.

When brown people dress poorly, they must be poor. When white people dress to look poor, they end up on the runway. I’ll have me a piece of that polyester pie, please.

Guys. The elusive gap year is the slap that keeps on giving. White people are the sole beneficiaries of the gap year. The gap year is to white people what cheese is to pizza. They just go together. And when they go, they go to London to au pair, or to Australia to help farm aborigines or aubergines or whatever (who knows what they get up to down there) and, obviously, they check out emigration prospects. They also do things like go to the US to assist kids of a First World nation at summer camp, or they go to Alaska to ski for a couple of months of the year and work in a resort for the rest. Meanwhile the rest of us are back here grafting because our parents don’t have money or time for nonsense.

Then one day, we all meet on the playing field that is the professional environment and we’re talking about that time we worked in the back kitchen at a Juicy Lucy and the first five pages of Brittany’s CV has a list of international ‘job’ experiences. Let’s get real here: a gap year is 365 days of doing as little as possible with as much funding from your parents as possible. White people are so privileged, they can afford to go and do nothing for a year and come back to have a tertiary education.

I have figured out why. The answer, my friends, is in the spices. White people don’t spend any money on spices, ever. Spices are offensive to white people. They once stole them from a wide variety of countries, and now they refuse to use them so they will not pay for them.

The spice market is doing well in South Africa because the majority of our population have taste. But it’s the minority who have money. And they will not throw it away on spices. Well, I am happy to throw some spice here: I would love to be white for just one day so that my mouth would be happy with the taste of food as bland as sawdust, in exchange for a lovely year or two overseas for niks. DM