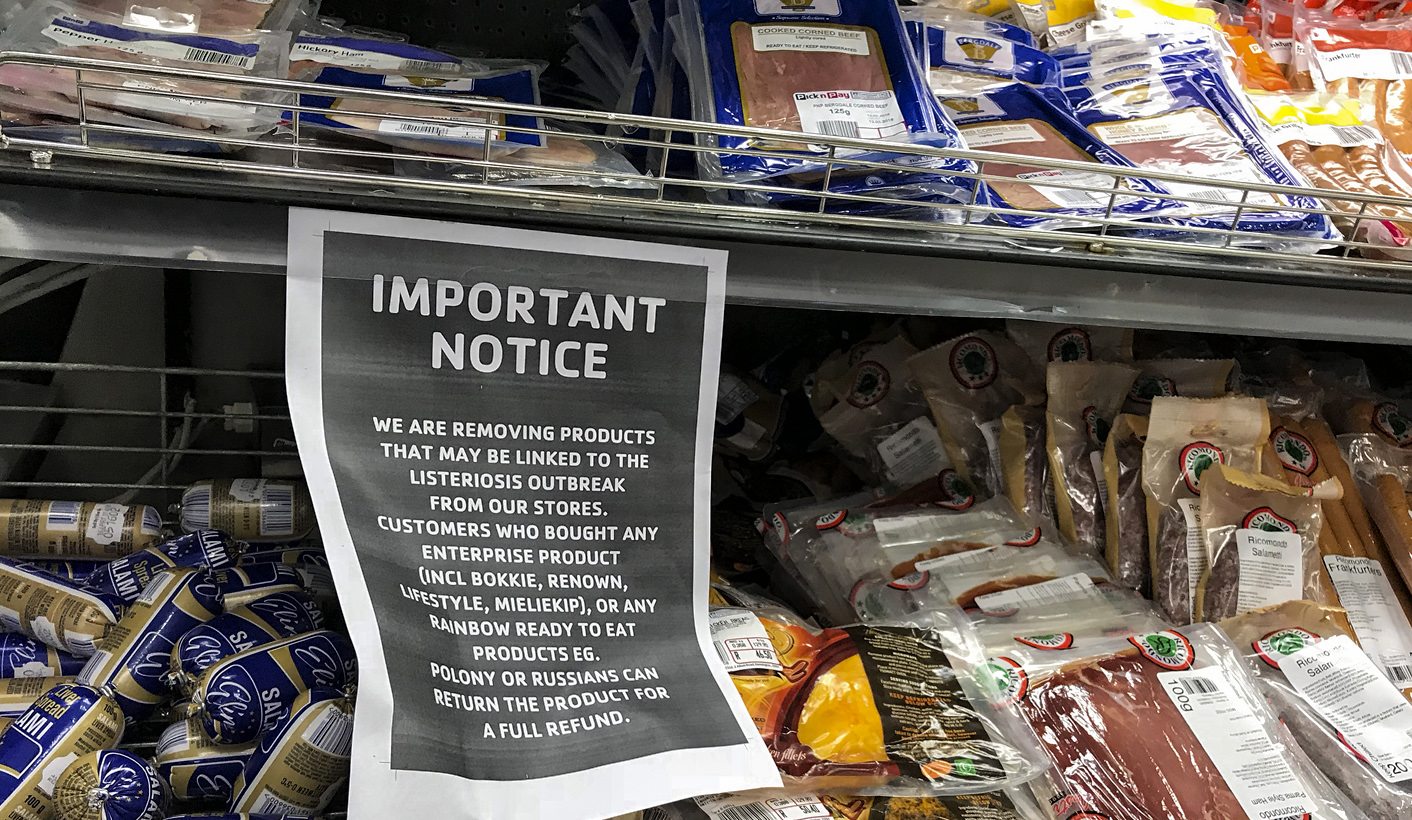 The listeriosis epidemic has exposed the crucial need for healthcare legislation to be reviewed regularly – not only to ensure it is in line with international developments but also to prevent potential health catastrophes. By CHRISTINE BOTHA.

World Health Day – the global health awareness day initiated by the World Health Organisation (WHO) – was celebrated on 7 April. The theme for 2018 is universal health coverage, urging governments to actively pursue making access to essential quality healthcare services available to everyone. This theme is in line with the state’s obligation to healthcare in terms of section 27(2) of the Constitution, to take “reasonable legislative and other measures within its available resources” to achieve the “progressive realisation” of the right.

Universal health coverage, according to the WHO, is not limited to ensuring access to medical care but also includes public health service campaigns. A vital element of public healthcare is food safety. South Africa is currently facing the world’s largest outbreak of listeriosis, a serious food-borne disease caused by the bacterium Listeria monocytogenes.

As of 26 March 2018, 982 laboratory-confirmed cases have been reported and thus far more than 180 people have died. The goal of health for all would mean very little in wake of this epidemic unless an urgent review of food safety management in South Africa is undertaken.

Listeriosis, according to the WHO, is one of most severe food-borne diseases, associated with a high mortality rate of 20% to 30%. The bacterium is found in soil, water and animal digestive tracts, and it is estimated that 2% to 10% of the general population carry the bacterium without any noted health impact.

The bacterium, however, has the unique ability to multiply dangerously at low temperatures. Further, its resistance to high salt and acidity, often used as preservatives, makes it particularly difficult to control once contamination occurs in the processing chain. Refrigerated foods with a long shelf life, and ready-to-eat foods which require no further cooking, are particularly viable for high concentrations of the bacterium. The most vulnerable in society –pregnant women, newborns, the elderly and immunodeficient people – are especially at risk of contracting invasive listeriosis.

After the Department of Health (DoH) identified the Polokwane food production facility of the processed-meat-manufacturer Enterprise Foods as the source of the current outbreak of listeriosis (driven by the bacterium’s ST6 strain), a national recall of Enterprise’s chilled meat products and an export ban of these products followed.

Not only is the extent of the health impact to date unknown – due to the long incubation period of listeriosis – but the socio-economic impacts have also been extensive, with an estimated loss of over $8-million from the banned exported products alone.

Enterprise and its holding company, Tiger Brands, are also potentially facing an enormous class action in terms of the Consumer Protection Act of 2008. The proposed class action envisages four classes of people claiming damages after consuming the contaminated Enterprise products, and a two-stage process to be followed regarding liability. Currently, the High Court has been asked to certify the four identified groups, and the applicants need to show that a class action is appropriate before leave will be granted to pursue the mooted class action.

Turning to the regulation of food safety management in South Africa, various pieces of legislation and different state departments play a role. However, a glaring legislative lacuna in the public health sector is the out-of-date regulations, in terms of the Foodstuffs, Cosmetics and Disinfectants Act of 1972 (the Act). The Act regulates the sale, manufacture and export of foodstuffs, cosmetics and disinfectants. Foodstuffs, in terms of the Act, essentially include any article or substance, or ingredient thereof, which is ordinarily manufactured or sold for human consumption.

Regulation 692 in terms of the Act, known as the Microbiological Standards for Foodstuffs and Related Matters Regulations, unpacks how microorganisms in foodstuffs should be tested, and includes microbiological limits. For example, there is a restriction on the quantity of bacterium Escherichia coli (E coli) in edible gelatin, but the regulations do not provide for the bacterium Listeria monocytogenes, or the manner it should be tested.

Furthermore, Regulation 908 in terms of the Act, the Application of the Hazard Analysis and Critical Control Point system (HACCP system), also needs to be updated. The HACCP system, used to identify and control hazards in the food production process, only regulates food-handling enterprises processing groundnuts in terms of these Regulations. The Minister of Health may require other food sector enterprises to comply with the HACCP system, which in light of the listeriosis epidemic must be urgently attended to.

Food-handling enterprises may already comply with international standards and specifically apply the HACCP system to fulfil the requirements of clients.

However, the fact that the DoH has failed to update the above legislative lacuna in consideration of international trends is not reasonable. The listeriosis epidemic has exposed the crucial need for healthcare legislation to be regularly reviewed – not only to ensure it is in line with international developments but also to prevent potential health catastrophes. A core provision of ensuring health for all should be to ensure that no harm is done and that the state is taking all reasonable measures to prevent health hazards. DM

Photo: A sign to inform customers is placed over the processed cold meats section of a supermarket in Cape Town, South Africa, 05 March 2018. EPA-EFE/Nic Bothma