Op-Ed: Cellphones vs Knobkerries – we need to craft a new map to guide us 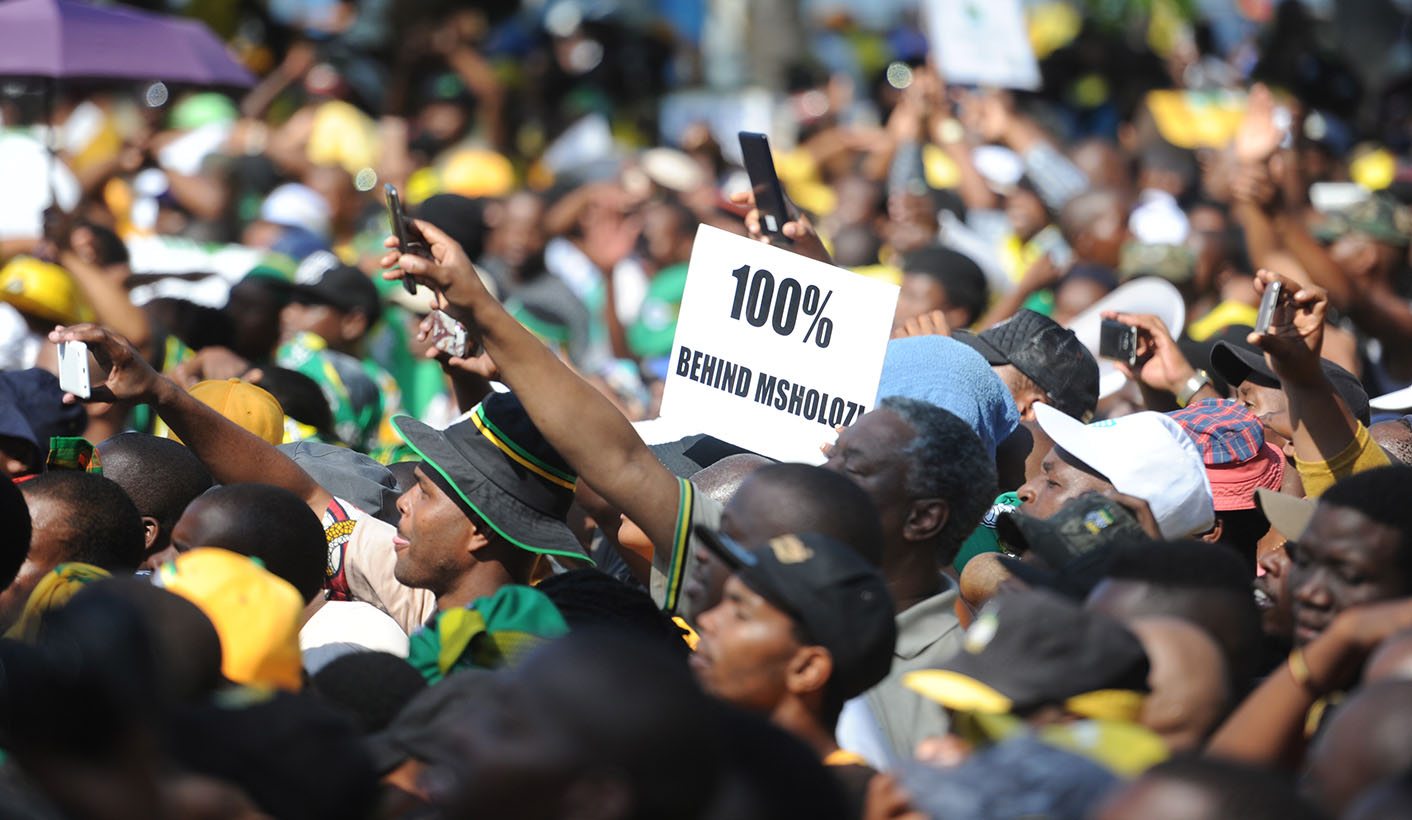 At the risk of eliciting an Africanist backlash, one might say South Africans have been scattered along the road between tribal pre-modern communitarianism and individualist modernism. We see this in the crowd who defended former President Zuma outside the Durban High Court. By MARIUS OOSTHUIZEN.

The very idea that civilisation is a process, from the primitive to the sophisticated, is controversial. Usually, in the context of post-colonial Africa, such a perspective of “social progress” is met with anti-colonial sentiments that argue that African heritage is not to be frowned upon or demeaned as a shallow form of barbarism. To do so would be racist and such were the motives for ethnocide during colonial times. The likes of the Kingdom of Mapungubwe, a pre-colonial gold trading settlement, are often cited as evidence that pre-colonial Africa’s culture and ways of life were sophisticated and rich in texture and value.

One can agree with such a pro-Africanist view, celebrating African heritage in sociological and anthropological terms, and still make the argument that the realities of the contemporary world cannot be navigated using the winds and the stars and the bone throwing of yesteryear. In the same way that the Mapungubwe civilisation collapsed due to unforeseen developments, Africa’s ways of life today will collapse if Africans don’t take cognisance of the way in which their world is changing.

South Africa in particular is a breyani of contrasting cultures and world-views. Side by side, the descendants of settlers, such as the boers, live in comparative protestant conservatism alongside tribalists such as the Zulu nationalist resurgence, as well as individualist “westerners” and consumers of all sorts. Sometimes these cultural strains coincide in a single person, who must then construct their identity and sense of social location from the many social norms they favour and have learned to embody.

As a finance director in a multinational auditing firm based in Sandton recently told me during a lecture on business ethics, “I am a Zulu before I am a South African”. He is also a chartered accountant. This is one of the challenges of being a rainbow that coheres sufficiently to function – how to be a people when we are many peoples juxtaposed over centuries by our competing interests and conflicting world-views. We now, collectively as South Africans, embody these paradoxes.

In addition to this horizontal diversity between races, we have vertical diversity across generations. The elderly and the elders sometimes demand compliance with the traditional practices that ensured the preservation of community life in their own heyday, while the urban youngsters now shacking up in our cities, are less prone to “obey” the traditions imposed on them by uncles and older brothers.

So, at the risk of eliciting an Africanist backlash, one might say South Africans have been scattered along the road between tribal pre-modern communitarianism and individualist modernism. We see this in the crowd who defended former President Zuma outside the Durban High Court.

Among them were priests wearing clerical collars, praise singers in animal skins, veterans in camouflage uniforms and a couple of opportunists in three-piece suits. They were united by an irrational loyalty to a person – a cult of personality rooted in struggle history, tribal familiarity and blind faith. What was striking, though, is that Zuma’s supporters were carrying cellphones, taking selfies and videos for social media, not brandishing knobkierries. South Africa is changing. But into what?

Take the land reform debate, for instance. The narrative goes, “bring back our land”, a grossly simplified longing for a collective return of a singular object – one nebulous notion of soil. This, it goes, should be returned to a collective of the disenfranchised. However, when one looks at the images of successful black farmers celebrated on social media by these same lobby groups, these African icons are individual entrepreneurs, business people and at most single families.

The longing for land appears to be for the redress of a historic wrong collectively meted out, but the future aspiration is for a very personal and individualised form of material success. The clamour is to become black diamonds, to borrow a phrase, not to reconstruct communitarianism and live the ancient ethic of Ubuntu. On the contrary, the system of chiefs that enabled communitarianism is increasingly reframed as a vestige of exploitive patriarchy.

This should not surprise us. It is a pattern that has repeated itself in England, which changed from feudalism’s landlordship, and in America which changed from plantation ownership and slavery, and more recently China’s peasant migration to urban megacities in search of jobs and wages.

The same evolution is playing out in Lagos, Kigali, Dar Es Salaam, Luanda and closer to home. The process has been described as “modernism” by some in the West, but the process is not European or American per se. It is a human process and a global one that centres on the shift from village life to city life, from collectivism to individualism, from the superstitious to the material.

If this is true of South Africa, and the reason why the 56 million South Africans born in the last century are mostly urban dwellers who increasingly live a myriad of individualised, relativist ethical norms, it raises the question of how prepared our people are for a modernist way of life?

Before modernism, a youngster learned a trade or skill from one’s elders and survived on the egalitarianism of the family, tribe or clan. In modernism’s urban reality, one survives on one’s wits, ingenuity and personal agency, leveraging a network of friends and family from time to time at key inflection points in a personal journey of progress.

The street vendors of Delhi, India, for instance might travel to their historic village for a wedding or religious festival, but their children learn from books in classrooms and dream of a future in the information technology sector, not in the spice trade. What about in Johannesburg, Pretoria, Durban and Port Elizabeth?

Has South Africa come to terms with the rupture of our social fabric brought about by an imposed modernism? Do we see it as a rupture to be mended or a new addition to the tapestry that is African life as it stands today? The former view will spark reactionary revisionism while the latter view would seek to capitalise on the new possibilities it presents.

My concern, when I listen to the political discourse and popular myths of the day, is that the best future our leaders can conjure up is a romantic reimagining of Africa’s pre-modernism. Zuma’s Nkandla homestead is such a vision: collective farming, state-led development, and township car washes that remove the veneer of underdevelopment from the imported cars we choose to drive.

It is as if the former president expected to be our chief, instead of being public servant number one to a nation of individual persons who have dignity and freedom before the law. Now that we are in a so-called New Dawn, do we aspire to be sovereign citizens or loyal subjects of another round of kingly elites?

My own take is that South Africa needs a new initiation school movement. We need a concerted process and effort intended to prepare our people for a life shaped by modernism, rather than tribalism. This may include citizenship education, with an anchor in the Constitution, the Bill of Rights and the framework of our state institutions. But it must also include a bill of responsibilities that outlines the appropriate role of a citizen in the context of their own personal life journey. Since we have not come this way before as a nation, we need to craft a new map to guide us.

This is vital if we are to make the mind-shift required to prevent a spiral into state dependency and the accompanying historic resentments over the loss of various communities’ ways of life, arising from a process that was largely beyond this generation’s control.

In the absence of such a mind-shift, we are at risk of falling for populist illusions of collectivism that appeal to tradition rather than aspiration. South Africa is an exceptional country, but not in the sense that our exceptionalism will protect us from making the same collectivist errors made by Mao Zedong’s Cultural Revolution and Vladimir Lenin’s Russian experiment.

Those false prophets ushered in unmatched human suffering in the name of a collective ideal. Some would like to lead us towards collectivism through a single story narrative, that of the “African child”. But in South Africa the descendent of an Indian slave who worked the sugarcane plantations of Natal is today an African child as well.

We need to turn our democratic freedoms into personal liberty – of mind and of action, so that South Africans can create the future they each desire, by unlocking their own individual potential. This is what the preamble to the Constitution demands when it says:

“Improve the quality of life of all citizens, and free the potential of every person.”

Are we a nation of tribes, or a nation of citizens with diverse tribal, linguistic, racial and ethnic roots? DM

Marius Oosthuizen is a member of faculty at the Gordon Institute of Business Science. He teaches leadership, strategy and ethics. He oversees the Future of Business in SA project which uses strategic foresight and scenario planning to explore the future of South Africa.