DA Federal Congress: ‘Recall clause’ gets the nod despite resistance from some quarters 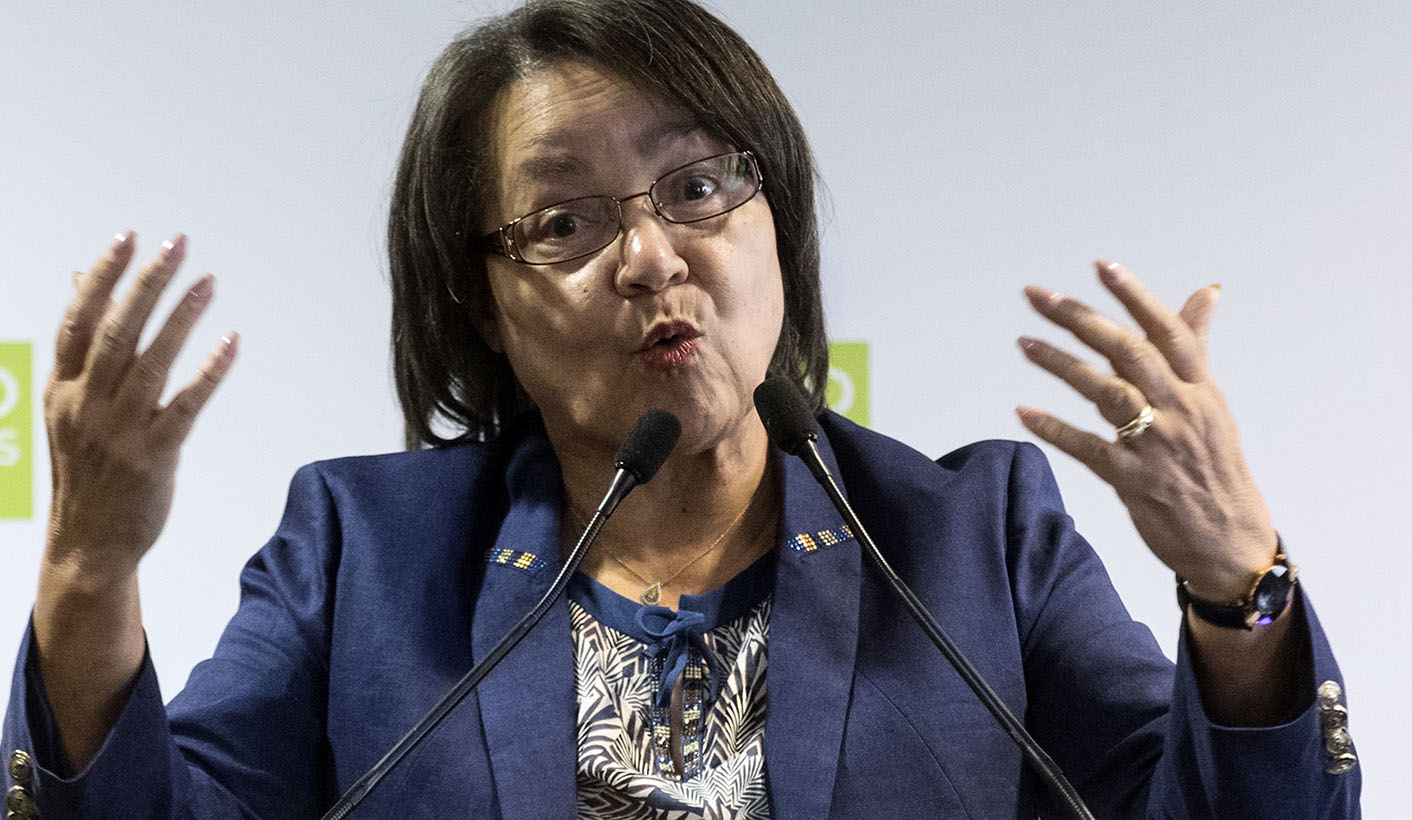 There was vocal resistance against it, but in the end an amendment to make it easier for the Democratic Alliance to sack errant high profile office bearers – like Cape Town mayor Patricia de Lille – passed with very little opposition at the party’s federal congress on Sunday. By CARIEN DU PLESSIS.

Delegates from the Western Cape fill a whole block to the left of the stage in the Tshwane Events Centre, where the Democratic Alliance’s federal congress took place over the weekend.

On Sunday morning the 2000-odd delegates discussed an amendment to its constitution held over from the day before. Dubbed the “recall clause”, many journalists were informally referring to it as the “Patricia de Lille clause”, to the chagrin of many of the delegates, who insisted it was about the principle and not the individual.

Some suggested it could also be used to, for instance, remove former party leader and Western Cape leader Helen Zille, after her tweeting about colonialism and a number of other matters became an embarrassment to a party trying its best to transform. Zille was not spotted at the federal congress.

In the past year or so, the party has been attempting to remove De Lille, Cape Town mayor – who is currently in her third political home and has a fan base that extends perhaps to outside the DA – through disciplinary process and a vote of no confidence in February. She won the vote with the support of ANC councillors.

ANC members in the province are now joking about how nice it is to have the ear of the mayor who, during her days as Independent Democrat leader before joining the DA in 2010, worked closely with some of them.

Her detractors say there are rumours in the province that she and a disgruntled former provincial ANC leader had plans to start a new party. So far there’s been no solid proof or confirmation, so it’s just rumours, but it speaks to the depth of the distrust of some party members in her.

De Lille, who did not attend the congress, described the rumours as “nonsense”.

As discussions on the recall clause started on the conference floor on Sunday morning, there was much noise from the block to the left, especially a clump of people occupying about a quarter of the seats to the left-hand-side of the block.

Then speaker after speaker came out in favour of the clause, adding a few amendments.

MP Dean Macpherson said “we can’t allow our government to be held hostage by special interest groups outside the DA”. Using the catch-word that became the main rally cry against former president Jacob Zuma, he said the party should be able to take swift action when its government was “captured” by those intent on serving their own interests and not the interests of the party or the people.

Fellow MP Debbie Shäfer suggested that the amendment be amended to read that such an office-bearer should resign within 48 hours of the decision being made against them. “This is not a disciplinary issue. We are a political party and should be allowed to take a political decision,” she said.

It would be untenable if a public representative had lost the confidence of their caucus and were still in a position.

Some shouting ensued from the floor, prompting those on the stage to ask for order.

Western Cape leader Bongani Madikizela – he who took over from De Lille after she resigned this position last year, less than a year into her term – said he supported the amendment. “We are first members of the party before we are members of any legislature. We must be subjected to the rules of the party, therefore if the party loses confidence in you, it is a political process and not a disciplinary process,” he said.

MP Phumzile van Damme also supported the amendment, saying it wasn’t a matter of discipline but of whether the caucus had confidence in the leader.

Party spokesperson Refiloe Nt’sheke proposed that the clause shouldn’t only cover the president, premiers and mayors, but any elected public representative appointed to the executive.

Another speaker urged delegates to consider the matter on principle and not on personality. “Congress must not allow this thing to pass for individuals. It will fit you today, but tomorrow the shoes won’t fit you.”

The mood in the Western Cape delegation changed, however, when Eastern Cape leader Nqaba Bhanga, dressed in traditional beads, spoke in favour of the amendment.

“No individual must hold a party to ransom. Everyone has a right to fairness, but the party must be able to take a decision,” Bhanga said.

KwaZulu-Natal leader, Zwakhele Mncwango, however, argued against the recall clause as proposed. The first speaker on the agenda, he said the clause should have a line saying the recall could only happen “on recommendation of the federal legal commission”, because it could be dangerous for the party to leave this out. He said natural justice allows each individual to defend themselves. Eventually he voted against the recall clause because his amendment wasn’t included.

MP Masizole Mnqasela, too warned against the recall clause, saying it could open the party to litigation “that’s costly both monetarily and politically”. He said due process was needed to remove office-bearers.

Even as there was talk on Sunday of her detractors planning to call a Cape Town caucus meeting as early as this week to invoke the recall clause, De Lille told Daily Maverick she still had time, and her main mission was to clear her name.

“My understanding is that it’s going to be applied retrospectively, therefore the current charges I’m subjected to, will proceed before the [federal legal] commission.”

She said she would also proceed with her application before the high court, set down for May 2, to challenge the party’s findings about tensions in the caucus.

“As far as I’m concerned, it is not about the position or about the DA, but putting my time and energy into clearing my name. I’ve been accused of being corrupt and covering up corruption and everyone who knows me I’ve spent my life fighting against corruption,” she said. De Lille, in her days as ANC MP, compiled a dossier about arms deal corruption and has strongly pushed the matter in Parliament.

“My reputation, my name has been smeared in public and has to be cleared in public. That’s why I want to have the [disciplinary] hearings open.”

For now she would wait to see what the party’s next step is. “My understanding is that this has to be cleared by fedex [the DA’s federal executive committee], so let’s wait and see.”

The amended clause that will be included in the party’s constitution now reads:

“If the President, a premier, a mayor or any other public representative elected or appointed to any executive position in a DA government, has lost the confidence of his or her caucus, the Federal Executive may, after giving him or her the opportunity to make representations to it, resolve to require him or her to resign from his or her office within 48 hours. Failure by that member to resign will lead to the cessation of his or her membership of the Party in terms of section 3.5.1.10. Any such vote of no confidence requires the leave of the Federal Executive before it is moved in the caucus.”DM