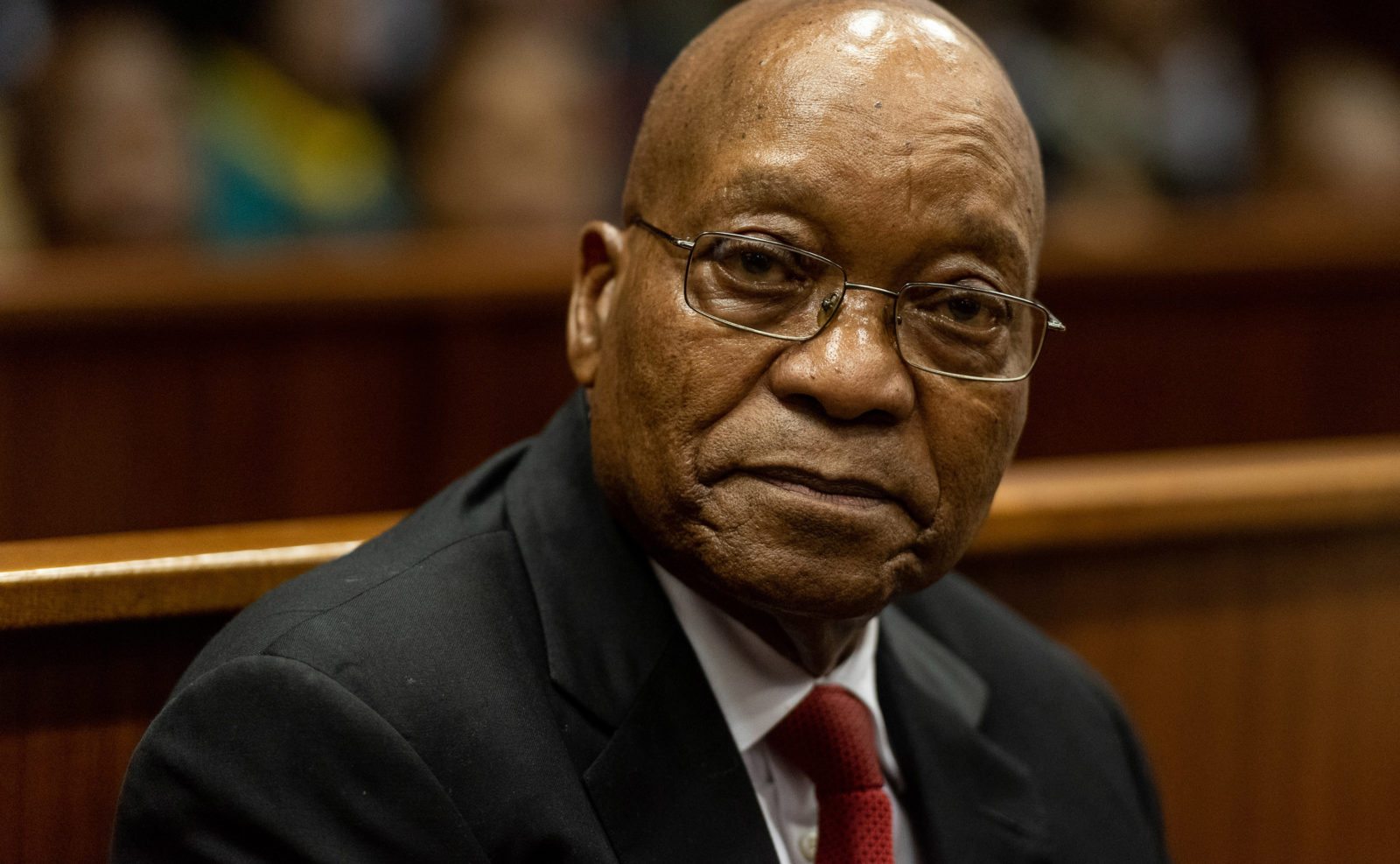 Former President Jacob Zuma’s corruption trial will not start in earnest before November at the earliest – and possibly not even then. This was the only concrete takeaway from Zuma’s inaugural appearance at the Durban High Court on Friday, where he took his place in the dock alongside a representative of French arms company Thales. Upon exiting the court, Zuma told a rapturous crowd of thousands that he would prevail amid this new onslaught of political persecution. By REBECCA DAVIS.

At 9.25am, the first former president of South Africa ever to sit in a courtroom dock entered Court A of the Durban High Court.

Wearing a dark suit with a red tie, Zuma was greeted by the low chant of “Zuma! Zuma! Zuma!” by supporters in the public gallery. There were well-known faces among them: short-lived finance minister Des van Rooyen; former SABC boss Hlaudi Motsoeneng; and the new Zuma defender-in-chief, Black First Land First’s Andile Mngxitama.

Zuma acknowledged their support with a bow and a wave before taking his seat. He sat roughly a metre distant from his co-accused in the dock: Christine Guerrier, the unlucky woman seconded by French arms company Thales to represent the firm.

“What’s her position at Thales?” one journalist hissed.

Zuma did not look at Guerrier, or attempt to communicate with her until the court session was over. Upon leaving, he bent towards her with customary courtesy and asked Guerrier how she was.

Awaiting the arrival of the judge, Zuma repeatedly acknowledged the presence of a female court clerk with a smile. When Judge Themba Sishi entered alongside two assessors, the former president rose to his feet and bowed.

Zuma’s long time nemesis – state prosecutor Billy Downer – was first to address the judge, explaining that the charges against Zuma and Thales marked the “continuation” of the NPA’s old case. It was the first time Downer had appeared in that courtroom since his successful prosecution of Zuma benefactor Schabir Shaik in 2005.

“The state is ready to recommence the trial,” said Downer.

Zuma sat stiffly, with his lips pressed tightly together and his eyebrows slightly raised. Occasionally he fiddled with his tie or pressed his glasses further up the bridge of his nose.

Downer advised Judge Sishi that the state still needed to provide Accused One and Accused Two with copies of the criminal docket, which would be done “very, very shortly”. He requested the judge to postpone the matter until 8 June 2018, pending “provisional matters”.

The court learned that – as predicted – Zuma “wishes to bring a review application concerning the decision to prosecute him again”.

On Friday morning, legal expert Pierre de Vos expressed the view on Twitter that such an application had no chance of success. If it fails, Downer indicated that Zuma’s lawyers would bring a further application for a permanent stay of prosecution.

“She is French; she understands English,” Downer told Judge Sishi. Zuma looked across at Guerrier for the first time.

The state prosecutor said that all the lawyers were in agreement that a postponement until 8 June was satisfactory: a point subsequently confirmed by advocate Hoosen Gani, in court for Zuma.

The absence of Zuma’s long-time legal eagle Kemp J Kemp caused some raised eyebrows. But Gani explained to journalists after court that Kemp was very much still acting for Zuma, and that Gani was merely a member of Kemp’s team.

Gani confirmed that Zuma’s lawyers will “challenge the legitimacy of the prosecution”. While Downer had earlier proposed a potential trial start date of 12 November 2018, Gani made it clear that Zuma’s legal team was not agreeing to any such date for now.

Advocate Anton Katz, acting for Thales, had nothing to add.

When Judge Sishi addressed the court, he did so very softly to confirm that the matter was adjourned until 8 June.

Judge Sishi added that the two accused were released on bail – before correcting himself with a laugh. Zuma and Guerrier are not out on bail, because they were summoned to court on the agreement of lawyers. The judge declared the court to be adjourned.

After a short consultation with his legal team, Zuma walked out of court flanked by supporters and bodyguards. He gave a thumbs-up to media; there was a special wave for BLF. When he exited the court precinct, it was to a rock star reception from the waiting crowd outside.

To the ululating Durban audience, in fact, it appeared that Zuma had never stopped being the country’s Number One.

“They are humiliating our president!” one man said angrily, gesturing to the court.

While Zuma cronies Mngxitama and the MKMVA’s Karl Niehaus sang his praises to the audience from a raised stage, Zuma stood quietly in the middle, surveying the crowd.

It was a blisteringly hot Durban morning. Entrepreneurs did the rounds hawking corn, fruit and ANC merchandise. As was the case the previous evening, Zuma supporters had chosen to defy the directive from ANC leadership forbidding the wearing of party regalia to express solidarity with the former president.

Among the items on sale on Thursday were plastic visors hailing Msholozi, and lanyards commemorating the life of Winnie Madikizela-Mandela.

When Zuma took the microphone to speak, he did so at length to a hushed and attentive audience.

Speaking in Zulu, the former president told the crowd that he was being prosecuted once again for political reasons. He questioned why he was being targeted over the arms deal when at the time he had been merely a provincial MEC. Zuma was being dragged to court again because of his refusal to keep quiet about economic transformation, he said.

It was a narrative of victimhood and defiance which seemed to land well with the crowd.

After a certain point, however, chants of “Shini!” began to resound: a reference to Zuma’s trademark song Umshini Wam, like music fans shouting requests at a concert.

Zuma, a seasoned performer, gave them what they wanted – before escaping the heat into his waiting motorcade and being whisked off.

“There is no president like Zuma,” mused a supporter to nobody in particular. He used the present tense. DM