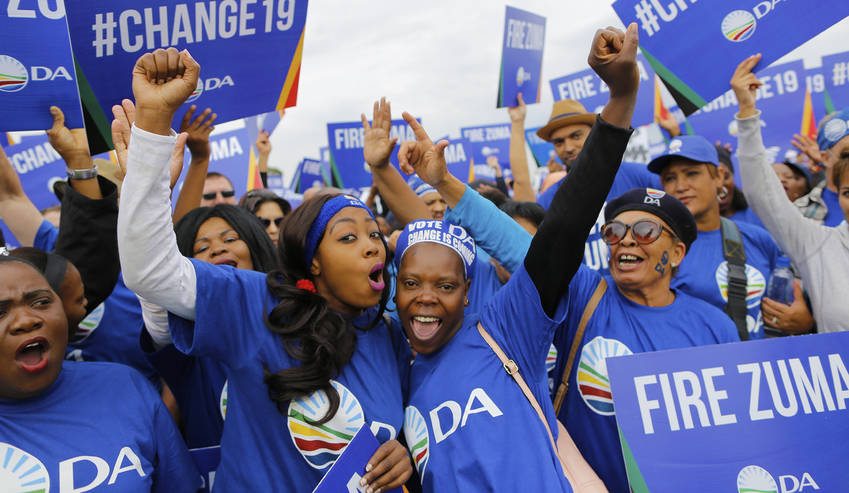 Party leaders Mmusi Maimane and James Selfe will both be re-elected uncontested at the DA Federal Congress this weekend, leaving the race for federal chairperson as the congress's defining contest. GREG NICOLSON spoke to frontrunners Athol Trollip and Solly Msimanga.

Both Trollip and Msimanga want to be judged on their accomplishments. Msimanga joined the DA 12 years ago, worked on the administrative side in marketing and communications, and rose through the regional ranks to chair the party in Gauteng. He chaired the DA in the province when it took two metros from the ANC in 2016 and then went on to become Tshwane mayor, a position he holds currently.

“The experience and track record speaks for itself,” said Msimanga.

Trollip, who was elected DA federal chairperson in 2015, is a DA veteran. He’s spent 23 years in the public service, led the official opposition party in Parliament and the Eastern Cape, where he helped build the DA and take Nelson Mandela Bay, where he now serves as mayor.

He said he has built his brand by standing for positions, winning some, losing others, but never turning his back on the party while sticking to his principles.

The DA congress comes at a crucial time for the party as it tries to capitalise on its 2016 gains and looks to govern at least one more province after the 2019 elections. But there are challenges – a resurgent ANC under Cyril Ramaphosa, the ramping up of racial rhetoric against the party from the EFF, and a score of the DA’s own goals.

Maimane will be re-elected unopposed as party leader and Selfe as chairperson of the federal council, leaving the race between Trollip and Msimanga as one of the high-profile contests that will test members’ diverging views on the party’s future. DA Free State chairperson Annelie Lotriet is also set to contest the job, but unlikely to pose a significant challenge.

The most public point of departure between the pair is the proposed addition of a diversity clause to the DA’s constitution. “The Party will to the best of its ability attempt to replicate diversity in its own ranks,” reads part of the constitutional amendment proposed by Maimane.

Msimanga has been vocal in his support of the diversity clause. He said it shouldn’t be seen as a binary ambition but about realigning the DA’s public officials to reflect the country’s divergent demographics based on race, religion, gender and sexual orientation. Msimanga said he wants to “push a bit further” on the details of the clause at the congress.

He said those opposed to the amendment believe it amounts to imposing quotas, which he denied, and fear losing their positions in Parliament.

Trollip is opposed to the diversity amendment. He said it would effectively introduce quotas into the DA. As Eastern Cape leader, Trollip said his record on expanding membership was unparalleled and diversity within the party would be better served by recruiting the best members based on merit, unity and respect.

The debate over diversity once again raises the question of how the DA will respond to claims that whites still have a dominating influence in the party, but there are a host of other policy resolutions that will be debated at the congress.

Trollip has based his campaign for re-election as federal chairperson on his commitment to upholding the party’s core values. “Absolutely,” he said when asked if he believed sections of the party wanted to embrace populist stances.

“If you start moving away from the values that underpin the party to the values of other organisations, you move towards populism and march to other parties’ drumbeat,” he said. There’s long been a debate in the DA over how flexible the party’s policies should be as it seeks to attract more black voters. The complexities of coalition governance have raised further challenges.

“If political parties do not stand up for their values they will fall, and fall hard. This the voters will guarantee as they did in the biggest metros in the country in 2016,” Trollip wrote under the threat of a no-confidence motion brought by the EFF in Nelson Mandela Bay.

Trollip comes into the DA election having recently survived a no-confidence motion that failed to get off the ground in Nelson Mandela Bay. The mayor, who comes from a politically active family, has faced challenges running his coalition since sacking his deputy, the UDM’s Mongameli Bobani. Trollip, who can come off as abrasive, is seen as appealing to conservatives in the party.

Msimanga is a rising star in the party. He has support from young black leaders like Makashule Gana, a DA MPL in Gauteng, and the party’s KZN leader Zwakele Mncwango. As Tshwane mayor, he has faced less criticism from coalition parties and the EFF than Trollip and Johannesburg’s Herman Mashaba. Where Trollip provides hard-nosed analysis of local politics, Msimanga is genial and charismatic.

The DA is often criticised for scoring own goals, such as allowing Helen Zille to tweet and struggling to openly communicate its position on Cape Town Mayor Patricia de Lille, opening itself up to criticism of being selective in how members from different backgrounds are treated.

Trollip dismissed criticism that he had been quiet on such issues. He said he engages robustly in meetings but never comments in public about the internal party processes, which is not his responsibility as federal chairperson.

Msimanga said the party needed to take decisive leadership and action on unpopular decisions. Crucially, he said the party had to improve its communication strategy to ensure the public knows how and why it takes the decisions it does.

Both candidates said the contest represented positive debate about the future of the DA. Trollip said the contest would avoid the party acting in an echo chamber while Msimanga said its important for the party to come out of the congress and unite ahead of 2019. The DA, however, is being pulled in multiple directions and while a wide-scale split is unlikely, some members will be left disappointed whichever way it swings. DM