Op-Ed: Unnecessary alarmism around the constitutional reforms in Burundi 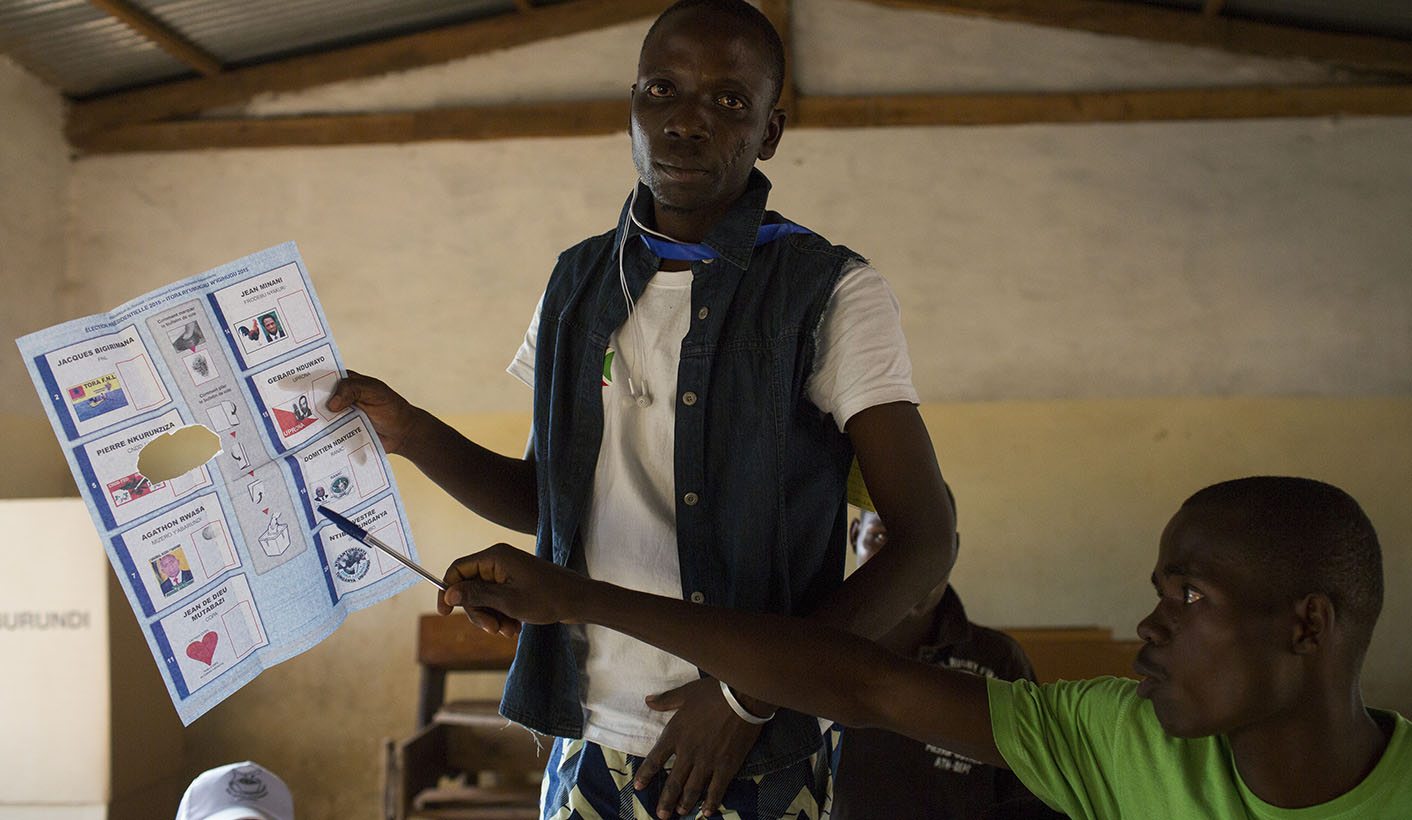 On May 17 2018, Burundian citizens using the referendum vote, will decide whether their country will adopt a new constitution or remain with the old and controversial one. In order to allow all political stakeholders to have a say on the constitutional reforms, the government will need to ensure there is an even playing field. Hopefully, this will reduce tensions and add more credibility to the vote. By PATRICK HAJAYANDI.

In the run-up to the referendum, a lot of contradicting views have emerged regarding the real motivation behind the upcoming constitutional reform and the timing of such an important political event. Some political analysts and commentators argue that the main purpose of the new constitution will be to allow the incumbent president to extend his tenure in office. They go as far as to prophesy on a possible outbreak of deadly violence.

The recent exchange between Professor Stef Vandeginste and Ambassador Anatole Bacanamwo via the Iwacu Newspaper brings to light a number of the constitutional clauses which need clarification or in which there is no unanimous position as to how they should be comprehended.

Firstly, there are constitutional loopholes related to the concomitant interpretation of articles 96 and 302 of the current constitution in relation to presidential tenure in office. For example, article 302 has been interpreted as referring to the terms in office, as far as the opposition is concerned. But the same has been considered as a reference to the mode of election for the ruling CNDD-FDD – curiously, everyone seems to be correct in his interpretation. The conflicting interpretation of the two articles is considered one of the key factors that have led to the sharp disagreement between the ruling party and the opposition, ultimately culminating in the actual political crisis.

Secondly, in relation to the process of the referendum itself, it is becoming obvious that the current constitution is not very clear on some important aspects of how the constitutional reform needs to be carried out. For instance, Prof Vendeginste shows that there is no clarity to whether the referendum should be considered as a decisional act or a mere popular consultation. In addition to this, in order for a constitutional amendment to be adopted, the actual constitution does not clarify what is the required quorum of voters.

Thirdly, there has been a debate about the lack of clarity with regards to how constitutional reforms are adopted after the referendum. Ambassador Bacanamwo argues that, after the referendum vote, the President of the Republic has the power to promulgate the new fundamental law while Prof. Vendeginste argument shows that new constitution can only be promulgated after it has been adopted by the Parliament and Senate. The few constitutional aspects and loopholes mentioned above show that the existing constitution needs to undergo some reforms for more clarity.

Beyond the constitutional clauses and confusing articles, there is a need to also clarify what comes first between the Arusha Peace, Reconciliation Accords and the current Constitution. According to the views of opposition leaders, the Arusha Accords signed in 2000 and hailed to have brought an end to the ethnic conflict, have a supra-constitutional status which gives them a privileged position vis-a-vis the 2005 constitution. For the ruling party, the constitution is without discussion is the supreme law and no other agreement should pretend to replace it or to hold the same status. According to CNDD-FDD members, the Arusha Accords on their own did not bring an end to the conflict, however, the Global Ceasefire Agreement signed in November 2003 needs to be taken into consideration as the ultimate step that led to an effective ceasefire and the end of hostilities.

There is a feeling that the eternal reference to Arusha Accords reduces to almost nothing the progress made in terms of curbing ethnic cleavages. Indeed, the accords have played an important role in diffusing ethnic tensions and in creating a new political landscape where the front line is characterised by more political struggles and less ethnic confrontation. The impact of Arusha Accords is highlighted by the development of cross-ethnic cooperation among political leaders. Today, the co-operation across ethnic lines is becoming an imperative for any group hoping to be taken seriously or attempting to gain political legitimacy from the population. Cross-ethnic collaboration is observed in various contexts- for instance, despite the fact that the CNDD-FDD is described as a pro-Hutu party, it is also true that it has the highest proportion of Tutsis within its leadership and ranks compared to all other political parties. Also, when you look at the various opposition platforms one notices the presence of both Hutu and Tutsi leaders collaborating on different political projects. Ethnic cleavages are gradually being replaced by political struggles for power by an ethnically heterogenous elite.

In return, this has been a very important factor in the prevention of massive violence and the likelihood of genocide. In view of the above, it seems that the Arusha Accords have fully played their role. In the long run, however, Arusha Accords may end up becoming irrelevant for the Burundian context, especially if the political elite continues to collaborate across ethnic lines and if the ethnic quotas remain incorporated in the constitution.

Also, the Arusha Accords should not be looked at as a panacea. As reflected in the current constitution, the accords have become, in some ways, a hindrance to well-functioning government institutions. Some constitutional dispositions which oblige the winning party to compulsory include the opposition members in the government have proven to be counter-productive. They have created a political system in which political affiliation has more importance than the performance. This has a very negative influence on the implementation of development policies.

The need for constitutional reforms is actually something on which many Burundians agree on. The stumbling block has been on how to introduce the reforms in a more inclusive way. Otherwise, the new project of the constitution has been elaborated with the prospect of addressing the obviously crucial issues which do not allow government institutions to be more efficient as a result of intra-institutional opposition. Whether the new constitution will strengthen political institutions and enable them to address the deep-rooted problems of bad governance, equitable distribution of the scarce resources and endemic corruption is yet to be seen. Another problem the new constitution will try to address is related to keeping or removing ethnic quotas in the constitution. According to the new bill, the Senate will have the power to decide within a period of five years, whether ethnic quotas should remain or be removed from the reviewed constitution. This perspective is important but at the same time it has enormous political implications on the stability of the country and should be approached cautiously.

Obviously, the debate around the new constitutional reforms and how they may affect the Burundian nation remains fierce but almost limited to the elite level. In a country where a considerable mass of the population is mostly composed of peasants living in rural areas (around 80%) and whose prominent needs are almost limited to security, food, shelter, education and health, the vicious and elitist debate on referendum should not be viewed as a factor to prompt violence. If violence is to occur at any time during the referendum process, it would be a result of political manipulation and would be an exogenous factor, therefore, the referendum process should not be reduced to being portrayed as a potential source of violence.

Unfortunately for the upcoming referendum, the opposition is once again calling for a boycott. This is yet another wrong decision with null effect on the outcome of the vote. Instead of alarmism and calls to boycott the constitutional referendum, the opposition leadership should rather encourage its supporters to take part in the electoral campaign for the YES or NO vote. Political participation rather than the electoral boycott is likely to have an influence on the new reforms. The victory of the YES or the NO vote will determine which constitution the country will have in the coming years. The participation of the opposition in the referendum process will be a valuable occasion to collect important information on how it is performing, on its popularity and on possible readjustments in perspective of the upcoming elections in 2020. In order to allow all political stakeholders to have a say on the constitutional reforms, the government will need to ensure there is an even playing field. Hopefully, this will reduce tensions and add more credibility to the vote. DM

Photo: Electoral officials display a spoiled ballot paper as they count votes in the Vugizo neighborhood in the outskirts of the capital Bujumbura, Burundi, 21 July 2015. Photo: EPA/WILL SWANSON