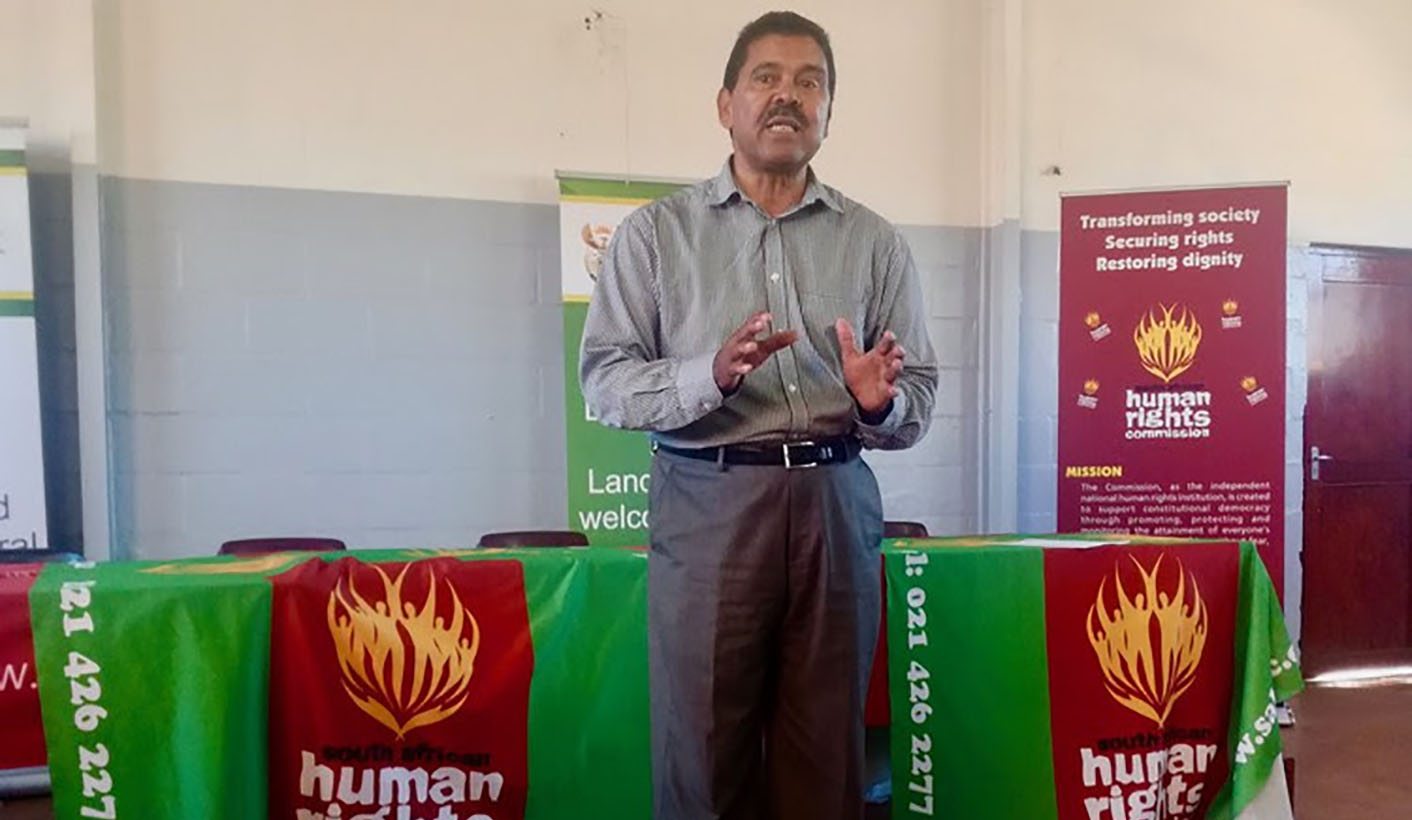 Twenty thousand people are threatened by evictions in Drakenstein, the Human Rights Commission was told. By Barbara Maregele for GROUNDUP.

The SA Human Rights Commission (SAHRC) is to ask President Cyril Ramaphosa to keep a promise made in 2014 to stop farm evictions until people can be given dignified housing.

Commissioner Chris Nissen told an indaba on farm evictions in Wellington last month that after the De Doorns strikes in 2012, Ramaphosa, then deputy president, had called for a moratorium on farm evictions.

“Sadly nothing has happened since. So now we will go to the president and ask him to please bring this into effect,” said Nissen.

According to News24, Ramaphosa made the call after he and senior ministers met agricultural and farm labour representatives in Paarl in November 2014.

Nissen was speaking at a one-day event hosted by the Commission and the Western Cape Department of Rural Development and Land Reform on 26 March.

Panellists included representatives from the Department of Agriculture, Drakenstein Municipality, Women on Farms Project, Legal Resources Centre and magistrates who regularly rule on evictions. Residents asked a number of questions.

Wellington resident Gloria Songelwe said, “Most farm workers are afraid to stand up for their rights.”

Lionel Beerwinkel from Rural Development and Land Reform said that under the ESTA (Extension of Security of Tenure Act), a farm dweller’s right to residence cannot be terminated if they have resided on the land for 10 years or more and have reached 60. But, he said, if the farm was sold, the new owner of the land would have to give permission for the household to stay.

He said ESTA did not prevent evictions. “You can still be evicted, all this (ESTA) does is ensure that proper processes, in accordance with the act, are followed before a farm owner puts you out,” he said.

Drakenstein municipal manager Lauren Waring said the municipality had become “a hotspot for evictions” because there were more than 2,400 farms and rural plots in the area. “It’s not something anyone can be proud of. We currently are aware of 1,127 pending eviction matters. We don’t know how many people are affected, but (we) estimate it’s around 20,000,” she said.

Two sites had been allocated for people who had been evicted. Water and sanitation cost the municipality R140,000 per site, said Waring. “We want money to be made available to buy and develop land for eviction victims,” she said.

Paarl magistrate Morajee Naik said he had worked in a court dedicated to evictions for more than 12 years. “It’s not easy to make a decision to evict people from farms. If the farm owner has a good lawyer and has followed the correct process, there is nothing your lawyer can do to stop the eviction,” he said.

Toni Xaba, Chief Director for Rural Development in the Western Cape Department of Agriculture, said after the farm worker strikes in 2012 and 2013, the department had completed a census of nearly 3,000 farms across the province. She added that it was very difficult for the department to follow up on violations by farm owners if workers did not report them.

But Carmen Louw of the Women on Farms Project criticised Xaba and her team for “ignoring the real issues” in the census report. “Their census is a thick book which counted many things, but doesn’t reveal how many violations there were. The reasons why people were angry in 2012-2013 and why they are still angry today were not captured in that census,” she said. Because of this, Louw said, Women on Farms had conducted their own survey in 2017 which highlighted labour violations and the poor working conditions of women farm workers.

Louw said the eviction of families from the Soetendal farme in Wellington was a good illustration of the impact of displacement from farms.

“People who live on farms expect to live there their whole lives, because their parents and maybe also grandparents lived on the farm. The Soetendal families got eviction notices in 2010. The new owner took over the farm and said he had no obligation to the long-term occupants which ESTA is meant to protect. They were evicted in December 2015, but had nowhere to go,” she said.

“The municipality moved them into tin shacks and provided two taps and five toilets for more than 120 people. The Soetendal group was placed between another informal settlement which didn’t have any services so now those hundreds of residents are also using those taps and toilets. Their lives were completely disrupted,” she said. Louw said since being moved into town many of the Soetendal people had lost their farm jobs, some children had not found places in school and others had been bullied.

“The morning of the eviction there were so many police with long guns. But that same protection is not given when farm workers’ rights are being violated. There is no proper provision to make sure that evicted families end up in proper housing,” she said. “Magistrates don’t always check whether there is adequate alternative accommodation.”

Nissen said the commission would put some of these questions to the government for answers. “There are many people here currently facing eviction. We need to figure out a way to better protect people’s rights,” he said.

Ramaphosa’s spokesperson, Khusela Diko, had not responded to GroundUp’s request for comment by the time of publication. DM

Photo: The SAHRC will ask President Cyril Ramaphosa about a promise he made on farm evictions, commissioner Chris Nissen told a meeting in Wellington in March. Photo: Barbara Maregele