The Killing Fields: How illegal firearms turned the Cape Flats into a war zone 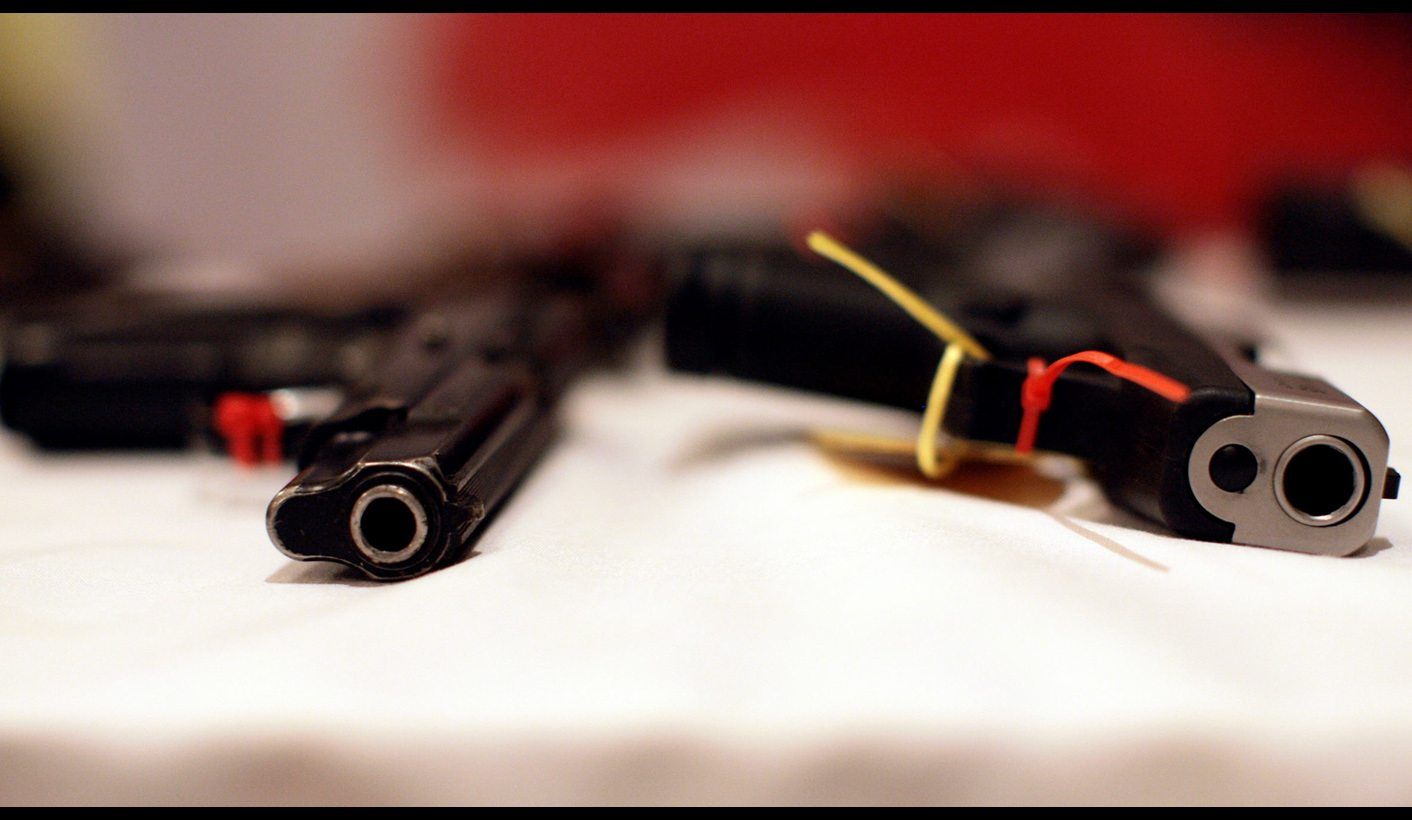 The violent death between 2010 and 2016 of 1,066 people, a tally that includes 261 children, some of them only one or two years old, can be directly linked to the circulation of illegal guns in Cape Town, a recently study published in the South African Medical Journal has found. In 2016, a former SAPS Brigadier, Christiaan Prinsloo, who was given the responsibility of taking care of the Confiscated Firearms Store in Silverton Pretoria, was jailed for 18 years for selling guns to gangsters. The devastating consequences have been made visible in more ways than one. By MARIANNE THAMM.

It was thanks to years of dedicated work by a group of seasoned Cape Town detectives that Christiaan Prinsloo and a fellow SAPS officer, a Colonel D Naidoo, were finally brought to book after having sold around 2,000 weapons (and ammunition) worth R9-million to Cape Flats gangsters, and Gauteng right-wingers, over a period of at least six years.

Prinsloo, a National Heritage Act gun inspector, who was charged alongside Alan Raves, pleaded guilty to 11 charges of racketeering. He was sentenced to 18 years in jail in 2016. Included in the indictment was a list of firearms confiscated from various gun dealers, including Raves, and which included submachine guns, light machine guns, assault rifles and shotguns among the other deadly weapons these men had illegally sent out into society.

One of the key findings of the study – which analysed data from a 20-year period surrounding the passing of the Firearms Control Act of 2000 – is that there was a decrease in the rate of firearm-related homicide after the introduction of the act and that strict firearm control was one of the “few policy options likely to effect a reduction in homicide rates”, particularly in a relatively short period of time in countries like South Africa which have high rates of violence.

“Our study highlights the importance of consistent implementation of such policies and legislation, and also demonstrates their vulnerability in countries with jurisdictional instabilities such as SA,” the authors concluded.

The corresponding author of the study is Richard Matzopoulos of the School of Public Health and Family Medicine, Faculty of Health Sciences, University of Cape Town, who is also a specialist scientist at the Burden of Disease Research Unit at the South African Medical Research Council.

The study begins by marking the fact that in 2000, South Africa had one of the highest homicide rates in the world, estimated to be five and eight times higher than the global average for females and males, respectively.

However, a significant decline in the homicide rate in the following decade, as well as a retrospective study of 37,000 firearm and non-firearm murders across five South African cities between 2001 and 2005, found a “significantly greater decline” in the rate of firearm compared with non-firearm homicide.

“Given the established association between firearm availability and firearm homicide rates, the magnitude, timing and consistency of the decline suggested that it was attributable to the Firearms Control Act of 2000 (FCA),” the authors note.

The act was gradually implemented from 2000 to 2003 “resulting in a gradient of declining firearm access in SA”.

There was, the study notes, a considerable reduction in approvals following the promulgation of the act, particularly from 2003 onwards. In that year, SAPS also conducted an audit of state-owned firearms and embarked on a special operation to recover unlicensed weapons. This, the study found, corresponded with a decrease in the number of lost and stolen firearms and a simultaneous increase in confiscations.

But suddenly, around 2011, “the decreasing overall homicide rates observed in police data were reversed”, most noticeably in the Western Cape, the researchers found.

This coincided with an increase in gunshot fatalities recorded in national death notifications between 2010 and 2013 and a significant increase in the number of new firearm licences, renewals and competency certifications processed. By August 2011, SAPS claimed to have cleared and issued more than 1 million applications, renewals and competency certificates.

Prinsloo and Raves’ indictment on the racketeering charges provides some detail behind the stats and the findings of the South African Medical Journal study setting out how Standing Order (G) 337 regulated the “dispatch of firearms and ammunition forfeited to the state”.

The indictment describes the journey these weapons would have taken:

“The firearms are brought to the Confiscated Firearm Store in Silverton, Gauteng and kept under lock and key in sealed boxes. It is then sent to the ballistics unit for IBIS [Integrated Ballistics Identification System] testing and an IBIS number is allocated that connects it to that specific store. A WR number for the destruction process is allocated to each specific firearm. The firearms are then sent for destruction in terms of Regulation 104 of the Firearms Control Regulation Act of 2004.”

Prinsloo was employed as a colonel at the time and was appointed as a co-ordinator in terms of Standing Order (G) 337. It was he who was in charge and in control of the Confiscated Firearms Store along with Colonel Naidoo.

However, Prinsloo and Raves “together with others known and unknown to the state formed an organised criminal group who acted in common purpose and conspired together on a continuous basis with the aim of committing corruption, theft of firearms and ammunition and fraud to obtain directly or indirectly a financial or other benefit”.

The “core function” of this criminal enterprise, reads the indictment, was to steal firearms and ammunition destined for destruction and provide these to “members of gangs on the Cape Flats”.

The gangs “displayed considerable demand for illicitly obtained firearms and ammunition to further gang wars that raged in the Western Cape from 2006 onwards”.

The study found that from 2007 there was “an increase in the circulation of illegal firearms” which had been “diverted from police custody by corrupt officials, particularly to gangs located in coloured communities (as per SA apartheid population group classifications)”.

The study’s analysis of firearm homicide trends by race revealed differences among rates in “coloured” communities compared with other race groups that could “be explained by differential firearm availability”.

“The post-2010 coloured homicide rate was of similar magnitude to its 2002 peak and significantly different from other race groups. Although increases in both legally and illegally obtained firearms are shown to be associated with homicide rates, it is the illegal trade that seems to have had a more pronounced effect, if the rates in the coloured population are indicative.”

The researchers attributed the bulk of the excess mortality in “coloured” South Africans to “the increased exposure to illegally obtained firearms”.

A recent police ballistics investigation quoted in the study linked 1,066 murders, 1,403 attempted murders and 315 other crimes in Cape Town between 2010 and 2016 directly to these firearms, including 261 cases where children were the victims.

The authors do state that there could be other factors contributing to the increase in firearm homicide in Cape Town after 2010, one possibility being an increase in gang activity during this period.

“However, increased gang activity would not explain the disproportionate increase in firearm homicides. Rather, the evidence of guns being placed with gangs suggests that the gang conflicts arose from the increased supply.”

Attached to Prinsloo’s indictment was a list of the names of more than 200 children who had been wounded or killed in gang warfare on the Cape Flats during the period Prinsloo and his co-accused had sold guns to gangsters.

It was an unusual move by the investigating detectives who formed the “Operation Combat” unit that caught Prinsloo and his co-accused, but the names were included to make visible the lives lost or maimed directly because of Prinsloo’s criminal action.

The death of such large numbers of citizens as a result of police criminality of course opens up the possibility of a class action.

Currently there are discussions among various NGOs as to the possibility of just such an action designed at holding government accountable for upholding the rule of law, particularly by those employed by the state to protect and serve. DM

Photo: Firearms confiscated by the South African Police Service are displayed during the launch of a three-month gun amnesty in Pretoria, South Africa 11 January 2010. EPA/STR