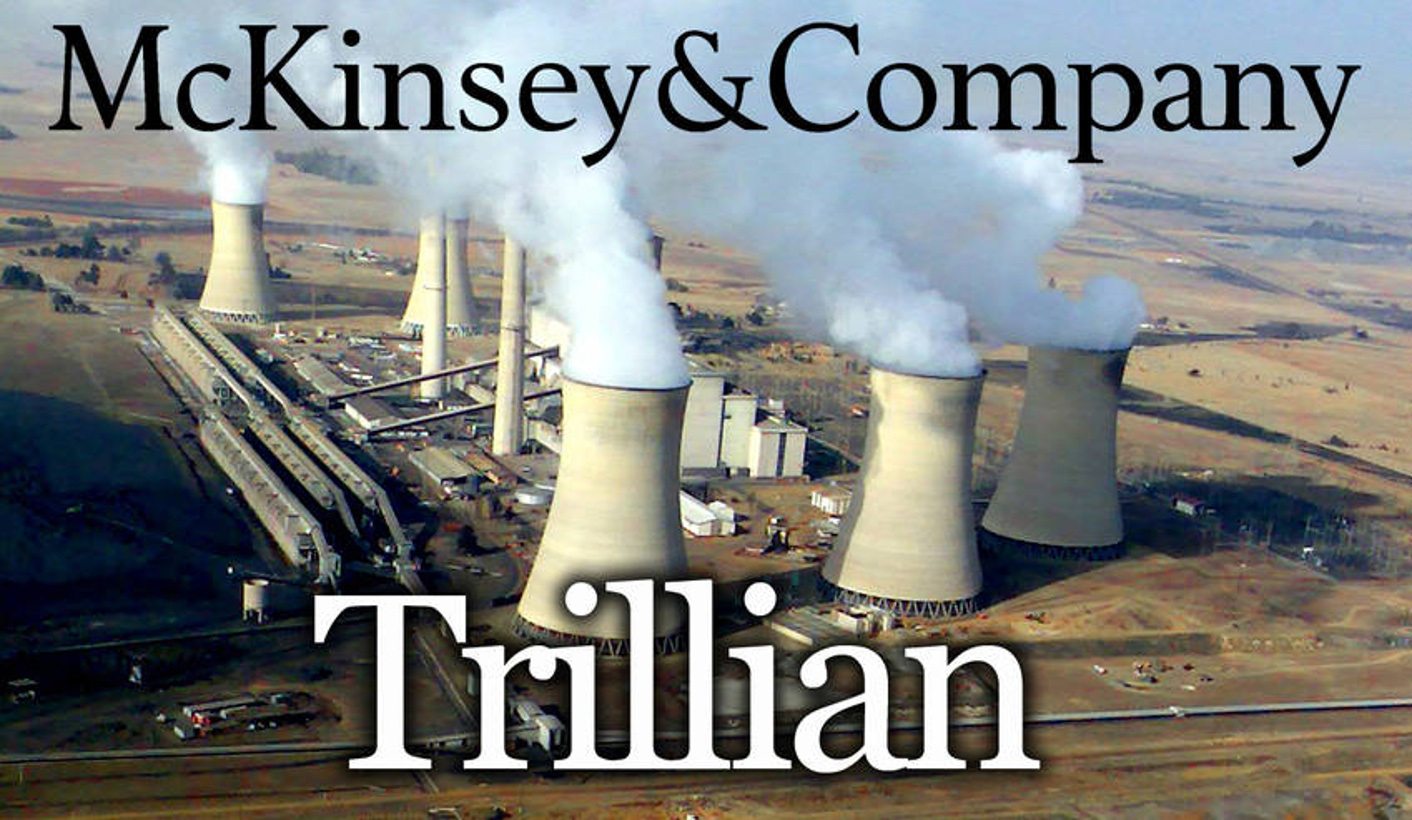 Eskom, now under new management, has stepped into the ring for what is no doubt going to be a titanic battle for the R1.6-billion it had unlawfully paid global consulting firm McKinsey & Co and the Gupta-linked Trillian Capital Partners. By JESSICA BEZUIDENHOUT for SCORPIO.

After being pipped to the post by the Asset Forfeiture Unit, Eskom has now initiated legal action in a bid to recover nearly R1.6-billion in unlawful payments it had made to two companies caught up in South Africa’s State Capture scandal.

These were moneys paid to international consulting company, McKinsey & Co and the Gupta-linked Trillian Capital Partners in the absence of valid contracts and, in some cases, where no work was done.

The state-owned power utility has confirmed that it is set to file a review application to set aside all administrative decisions that resulted in a series of staggering payments to the two companies until February 2017.

McKinsey received just over R680-million on 12 August 2016 and R348-million on 22 February 2017 while Trillian received amounts ranging between R113-million to R176-million over the course of six months.

Separately, Eskom last week filed papers at the High Court in Pretoria where it seeks to block efforts by the Asset Forfeiture Unit to seize the money as the proceeds of crime.

Eskom wants the National Prosecuting Authority’s forfeiture proceedings to go on hold, potentially permanently, until such time as a different court has ruled on its review application.

In challenging the AFU’s preservation order, Eskom argues that should it be successful with a review application, the money would be returned to the parastatal as the “rightful owner” and then, well, there would be no need for forfeiture proceedings.

A forfeiture order against an international company like McKinsey is likely to have massive implications – potentially also in the United States due to country’s strict Foreign Corrupt Practices Act whereby it regulates the conduct of US-registered firms abroad.

Eskom’s somewhat belated efforts to recover the R1.6-billion from the two companies comes after months of public anger as its previous management vacillated and bent over backwards to avoid claiming the money back from McKinsey and Trillian.

But the parastatal’s new guard also took longer than anticipated as it was tied up with immediate cash-raising efforts, among other things.

The latest two-pronged legal strategy kicked off as soon as it became possible, said the company acting group chief executive officer Phakamani Hadebe, in an affidavit submitted at court.

But, while Hadebe stresses Eskom’s current position – that former executives were complicit in facilitating the unlawful payments to McKinsey and Trillian – court papers suggest that the company is simply content with getting its money back.

The review application is intended to secure an order that would enable it to get its money back – the basis for this claim is that the payments were unlawful and in breach of the legislation governing Eskom’s procurement processes.

Hadebe said in his sworn statement:

“Once the Court has set aside as invalid the administrative decisions that led to the payments, it will require the payments to be returned to Eskom, as there was no lawful reason for the transfer of funds from Eskom to McKinsey and Trillian.”

“The purpose of the forfeiture proceedings – to ensure that no person benefits from the fruits of their unlawful activities – will already have been fulfilled by the return of the funds to their rightful owner.”

The public interest would be better served by the court allowing Eskom’s review application to be settled before the forfeiture proceedings, else there was a risk that two parallel process may result in conflicting court orders, Hadebe said.

“I am advised that Eskom has strong prospects of success in the review application, especially in view of McKinsey’s undertaking to pay its portion back. McKinsey has publicly undertaken to repay the money subject to certain conditions.

“By contrast, the forfeiture proceedings require the National Director of Public Prosecutions to prove, on a balance of probabilities, that the property is the proceeds of unlawful activities.”

Hadebe also states that while Eskom had intended to bring review proceedings to invalidate the payments to McKinsey and Trillian, the AFU had got there first.

He bemoaned the fact that Eskom was not formally served with a copy of the preservation order despite it being the “rightful” owner of the asset seized by the AFU.

“While the preservation order was anecdotally reported on in the media in January 2018, Eskom was not given formal notification thereof.”

In fact, says Hadebe, the parastatal’s attorney only came across a formal notice in a recent Government Gazette.

Eskom’s legal challenge of the preservation order puts a spanner in the wheel of the National Prosecuting Authority’s efforts to seize assets belonging to the two companies and thereby ultimately securing a forfeiture order.

In the AFU’s ex-parte application for the order obtained on 14 December, state investigators argued that the money paid to McKinsey and Trillian was the proceeds of crime, including fraud, theft, corruption and money laundering. The companies were accused of having behaved in a collusive and patently corrupt manner in their dealings with Eskom in respect of this controversial deal.

McKinsey has already filed a challenge in respect of the AFU order, its argument, in part, based on concerns it may be punished twice – first by having its portion of just over R1-billion seized by the AFU, and then potentially by a second claim from Eskom for the same amount.

Eskom’s court papers though do signal a significant shift in attitude.

Hadebe, in his affidavit, refers to an initial series of payments to McKinsey and Trillian, saying they had been made in the face of internal and external advice that they were potentially unlawful.

“These windfall payments were in addition to further payments made in terms of a short-term contract between Eskom and McKinsey, which came into effect on 1 October 2015 and terminated 9 January 2016. On the basis of that contract, McKinsey and Trillian received further payments amounting to over R112-million for a contract that lasted just over three months.

Yet, despite the widespread condemnation and public anger over the payments, the former Eskom board and senior executives repeatedly denied any wrongdoing and actively prevented Eskom from taking the necessary steps to initiate legal action, Hadebe said.

An initial letter of demand, instigated by Eskom’s now suspended head of legal, Suzanne Daniels, was sent to McKinsey and Trillian as far back as October 2017. She was removed days later and remaining executives attempted to wriggle out of it by commissioning a fresh legal opinion that found the deal and payments involving Trillian and McKinsey were all above board. This report was dated December 14, coincidentally the same day the AFU team were in court to secure the preservation order.

Eskom spokesman Khulu Phasiwe confirmed both matters, saying this was being done to ensure the return of all funds unlawfully paid to McKinsey and Trillian.

The forfeiture proceedings, he said, need to be synchronised with Eskom’s rights:

“Eskom is prepared to work with the NDPP and the AFU and other parties to ensure that these proceedings are harmonised in the most expeditious and cost-effective way, in the interest of justice.”

Phasiwe said the civil review proceedings were necessary in terms of the company’s obligation under the Public Finance Management Act. DM