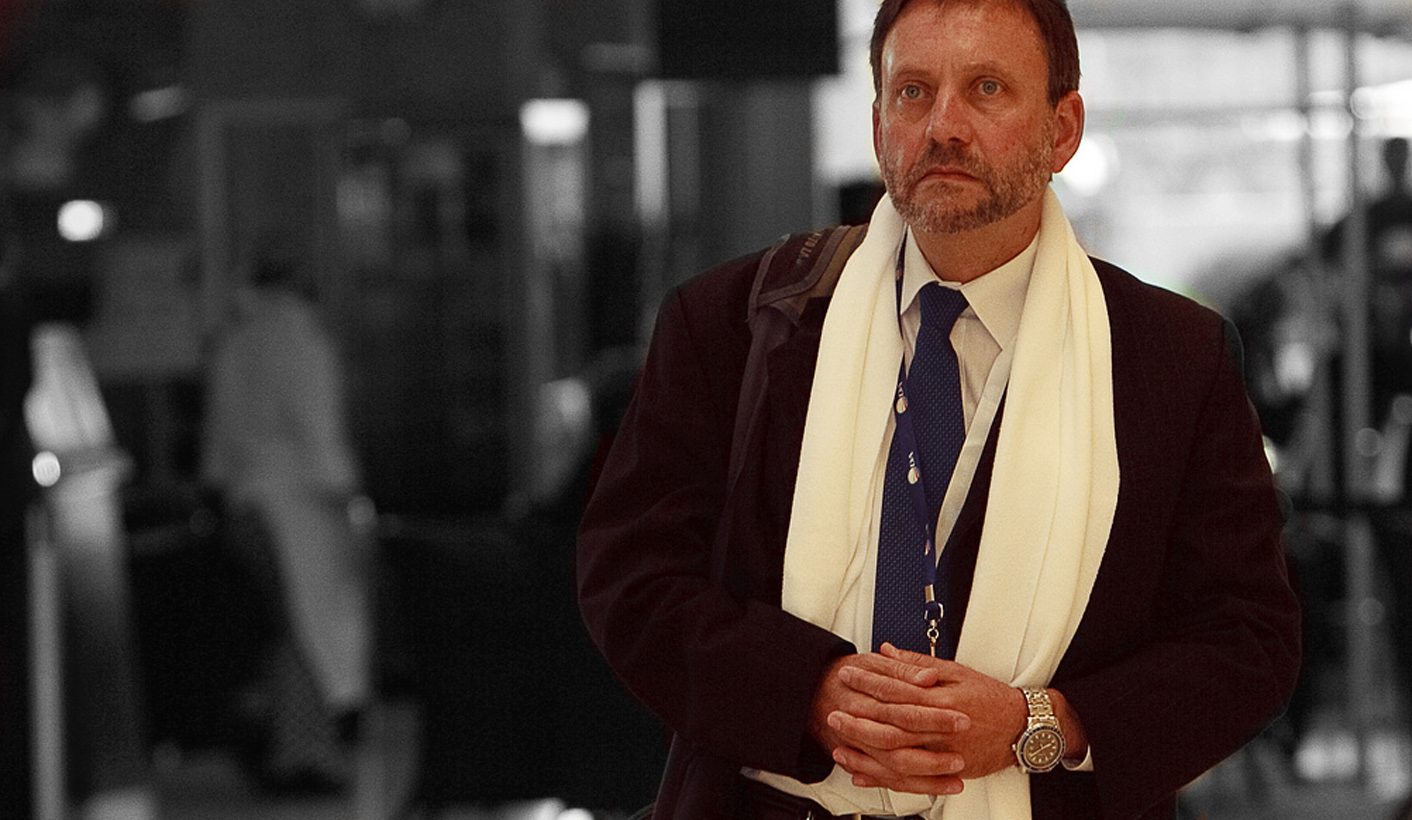 James Selfe has never had any internal competition in the almost two decades that he’s served in one of the Democratic Alliance’s most key administrative positions. In his 18 years of working under three leaders, the chairperson of the party’s federal council is now finally doing some succession planning. By CARIEN DU PLESSIS.

The official version of why nobody is contesting James Selfe for the position of chair of the federal council is a too-scary workload, and the lack of shine.

“It’s not a glamorous job, I wouldn’t describe it as that. It’s lots of hard work and it is one of the reasons I like to think that I’m not being opposed, is that actually when people look at the job they reel with horror,” Selfe explained.

While most staff members on Wednesday were still trying to find their way in the party’s new campaign headquarters in Bruma, Johannesburg – a three-storey building named Nkululeko House and smelling of blue paint and carpet glue – Selfe was already holed up behind a new office desk with his laptop in his otherwise empty realm.

“I got the office… with the birdshit on the windows,” he joked wryly, looking out of the blindless windows of his second-floor office with a view onto a clump of nearby treetops. Most of the other offices are in open-plan spaces, but he has a private one.

Selfe is to the Democratic Alliance what Gwede Mantashe was to the ANC during his decade as secretary-general (Ace Magashule is still too new to say) – an administrator, an implementer, an enforcer, and a bearer of vast institutional knowledge.

According to the DA’s constitution, Selfe “is entrusted with and responsible for the organisation and administration of the party, and for developing and maintaining a high degree of efficiency in the party”.

Selfe denies he’s got it all.

“Lots of people say [the job is] very powerful, but I’m not sure that I have any inherent power, that I can sort of step up and snap my fingers and something happens.

“I am the chairperson of a body and a body makes decisions, I implement those decisions. Sometimes I have to take decisions on behalf of that body, delegated decisions, but compared to the federal leader or even a provincial leader, I don’t think I carry that sort of power.”

Yet Selfe is intimately involved in the party’s candidate selection process and disciplinaries, and some say this means he could make or break political careers.

He is also the one person who knows just about everything that happens in the party, as he also sits on the tightly knit national management committee responsible for the day-to-day and snap decisions in the party. (This committee could, incidentally, become even smaller if a constitutional amendment to this effect is adopted at the party’s weekend federal congress.)

“When I tried to work it out five years ago, I think there were 17 different components of the job, ranging from the administration of the federal legal commission, the law cases, the operation of our candidate selection and nomination processes, our ready-to-govern programmes; I mean it’s an extensive amount of work,” he said.

On top of this, of course, the DA MP also has to be in Parliament and represent the party on the portfolio committee for correctional services.

Selfe more or less grew into this job since first stepping up in 2000, when he was much younger than the 62 years old he is today.

The party’s strategy of lawfare – fighting governance cases on everything from bad appointments to presidential legal fees in court to establish legal precedents and to show that not even presidents are above the law – has increased his work load considerably, and thrust him into the media spotlight.

Some in the party reckon Selfe “is getting a bit long in the tooth” and his habit of grinding his teeth in meetings – something which produces squeaky noises during telecons and interviews like this one – get on some people’s nerves.

There is also unhappiness among some about “a lack of strategic direction in the party, and almost a kind of amateurism”. The DA, they say, should have been aiming by now to bring the ANC to below 50% nationally in next year’s general elections (this is currently the aim in Gauteng and perhaps the Northern Cape only).

There was a push by some in the parliamentary caucus to get party chief whip John Steenhuisen – who is popular, ambitious, and highly competent in his current job – to contest Selfe.

In 2016 around the local elections there was talk by some that Selfe should step up to become chief executive officer when the current CEO, Paul Boughey, goes to the Nelson Mandela Bay Metro to become metro manager.

Steenhuisen should then have stepped into Selfe’s place – or rather, the 150 or so members of federal council would have convened to elect him chairperson (the chair of the federal council is not elected by congress like, for instance, the leader, but by the party’s federal council). This didn’t happen.

Come the 2018 congress, Steenhuisen wanted to contest Selfe. Versions differ on why he decided not to. Steenhuisen himself said it’s so that he could remain focused on his current job as chief whip, which he loves.

Others in the know in the parliamentary caucus said DA leader Mmusi Maimane convinced Steenhuisen to step aside to avoid conflict. Still others – detractors based outside the caucus but with a good knowledge of what’s happening within – said Steenhuisen could not contest for any party position because his tithes were not paid on time, and Selfe knows this too.

Steenhuisen has in the past denied the latter claim, and backed up his denials with recent account and bank statements. Those who are making the claim could, however, not likewise substantiate it with documentary proof.

Selfe says he loves his job, but recognises that a time will come in future when he will have to let go.

“I enjoy [the job] and when I put in long hours, including over weekends, it’s because I like doing it, so it’s not a particular strain or any of that nature, and thank goodness I have a very long-suffering family,” he said. Selfe’s semi-retired psychiatrist wife is in Cape Town, while his three daughters – and a grandchild – live in Gauteng.

The party’s constitution is set to be amended this weekend to provide Selfe with an additional deputy to the one he has already.

“We will be operating as a team, and it makes succession planning easier. And it also makes sure that, if I fall under a bus, there won’t be a catastrophe.”

This makes the deputy position(s) important, also for things like any future diversity planning the party might have in mind.

Member of Parliament Thomas Walters has been Selfe’s deputy since 2015, and he will be running again, alongside three other candidates: Haniff Hoosen (MP), Natasha Mazzone (MP), and Khume Ramulifho (Gauteng MPL). It’s expected that two would be chosen out of these to assist Selfe.