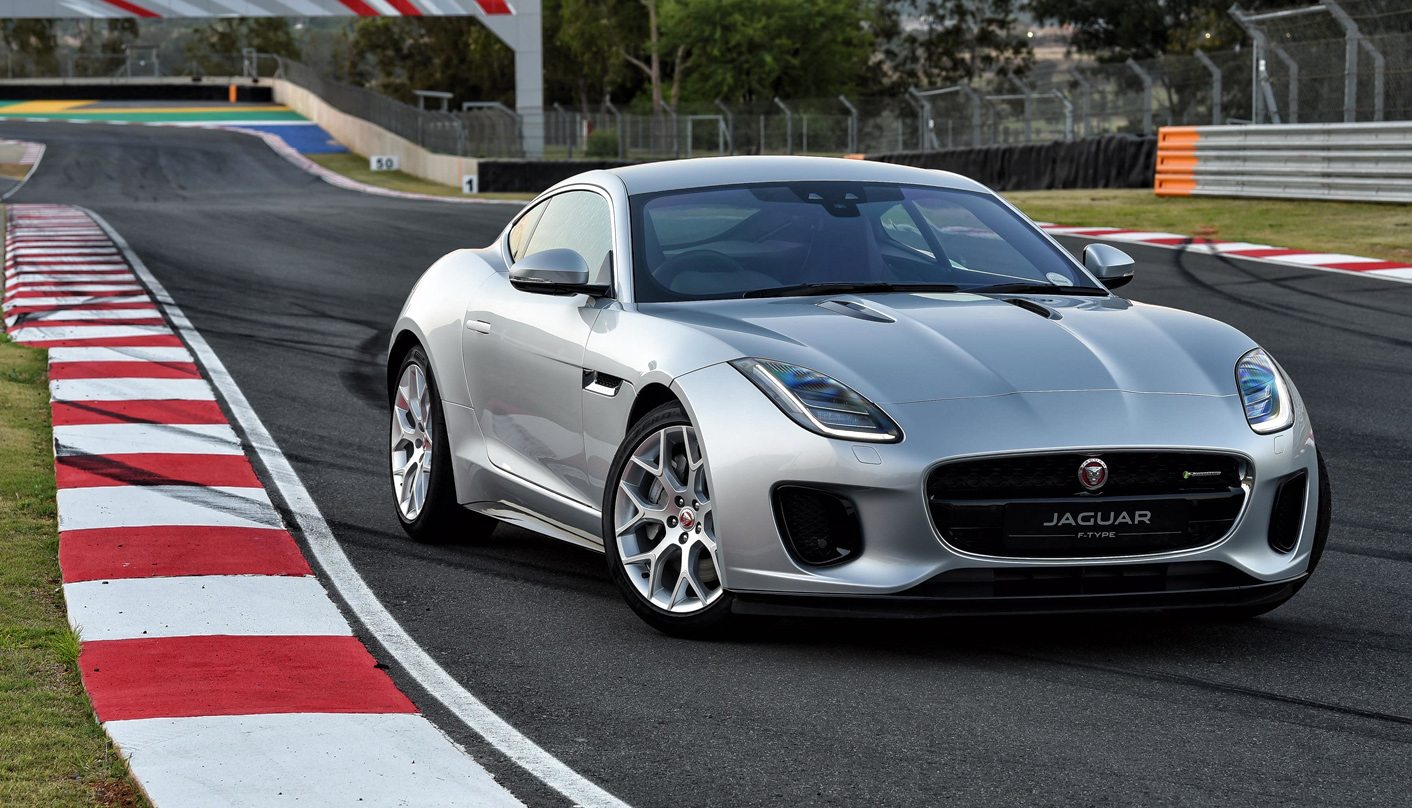 In a motoring world bent on downsizing and upping efficiency, the arrival of a small-engined Jaguar sports car should come as no surprise. But it also raises the inevitable question: is it still worthy of the F-Type badge? By DEON SCHOEMAN.

In many ways, the current F-Type is Jaguar’s modern take on the revered E-Type. Now a sports car icon, the E-Type had all the makings of a classic when it made its debut in 1961: drop-dead gorgeous looks, advanced technology, low weight and high performance.

More than a half-century later, the F-Type has taken up Jaguar’s sports car cudgels, doffing a hat to its hallowed forebear in the process. Yes, there are some similarities: a front-engined, rear-wheel drive configuration, an extended, prowling nose, and a cabin set quite far back on the wheelbase.

But the F-Type is a thoroughly modern car in own right. The design is distinctive and athletic, with an inherent litheness borne of its short overhangs, sculpted flanks, squat haunches and rounded roofline.

The F-Type is offered in coupé and convertible body styles, powered by a variety of supercharged V6s and V8s – until recently, that is. Late last year, Jaguar added a 2.0-litre four-cylinder turbo to the engine offering, creating a new, “junior” F-Type model.

Junior might be an unfair description of a car that, at least at face value, remains an F-Type through and through. The styling, for instance, is virtually indistinguishable from the more powerful versions.

In front, a bold, trapezoidal grille, hungry air intakes and stern headlights create a pugnacious visage, while the rear’s integrated diffuser is home to a single, rectangular exhaust tailpipe.

That centre-mounted exhaust is the most obvious hallmark of this “baby” F-Type, together with the fitment of 18-inch alloy wheels instead of the 19 and 20-inch rims standard on fancier models. And even those details aren’t immediately obvious when it roars past.

It’s a muffled roar from inside the two-seater cabin, which is well insulated and plushly appointed. High-backed bucket seats upholstered in a mix of leather and faux suede provide plenty of comfort and support, while the ergonomics link classic sports traits to advanced tech.

Standard equipment ticks all the luxury and convenience boxes, including a full-house infotainment system with colour touchscreen, a multifunction steering wheel, climate control, keyless central locking, and more. There’s an extended list of safety features, too.

The only blot on this otherwise exemplary copybook is the luggage compartment. It’s not only ridiculously shallow, but is filled almost to the brim with a space-saver spare wheel, thus rendering the boot all but useless.

While a four-cylinder engine could be considered modest for a sports car costing just short of a million rand, the output figures confirm that the entry-level F-Type has plenty of urge.

Add shorter gearing, and a quick-shifting auto transmission with eight closely stacked ratios, and this Jaguar should be every bit as rapid as its demeanour suggests.

If you’ve ever heard a V6 or a V8-powered F-Type start up, or being driven in anger, you’ll know that they count among the most evocative voices in the sports car business. The V6 has a banshee wail that’s spine-tingling, while the V8’s vocals are more sonorous, but no less appealing.

Yes, it emits a gleeful snarl when giving it stick and there’s a satisfying exhaust crackle under trailing throttle. But it will never match the bigger engines for sheer aural drama. And besides, it’s accompanied by an underlying resonance that some might find disconcerting.

Fortunately, the sonic character of a car is by no means an accurate indicator of its dynamic capabilities. While the F-Type 2.0 might lack the stirring sound of its more powerful brethren, it’s no slouch in the performance stakes.

The benchmark acceleration and top speed stats are respectable in sports car terms: a sub-6sec zero-to-100km/h sprint time, and a top speed governed to 250km/h, are hardly pedestrian. But the real attraction of this entry-level F-Type is the way it handles.

The more compact engine shaves around 50kg from the Jag’s kerb mass, and also lowers the two-seater’s effective centre of gravity. That’s allowed a recalibration of suspension and damper settings, with commensurate gains in steering response.

The differences are not that noticeable at urban commuting speeds. In traffic, the Jaguar feels lively but benign, happily trudging along at near idling speeds in full auto mode, while eagerly responding to throttle input.

But once you’re out of the city, and ideally negotiating a mix of curves and corners, the F-Type 2.0 shows its sports car class in no uncertain terms.

The steering comes alive, delivering loads of feedback and allowing the driver to thread the F-Type through the twisties with precision and confidence. Oh, and now’s the time to switch the gearbox to manual, and use the shift paddles.

Compared to the bigger-engined models, the nose is lighter and pointier, making high-speed manoeuvres more intuitive. You think, rather than actually steer the coupé through turns and sweeps.

Switch from Sport to Dynamic mode, and the result is a more focussed set-up: the exhaust note becomes more urgent, the steering gains an extra degree of edge, and gears shifts are even swifter.

For the enthusiast, those sharper traits will allow greater engagement and driver satisfaction. That said, it’s pretty impressive in more forgiving Sport mode too – and perhaps better suited to undulating country roads with compromised road surfaces.

Any concerns that this smaller-engined F-Type would be an inferior F-Type Lite thus prove to be unfounded. That uninspiring engine note aside, one could argue that it’s the best balanced, most intuitive member of the line-up.

Like all F-Types, it still feels a little too large for a strictly two-seater sports car. And despite an aluminium chassis, it’s on the heavy side.

Still, this “junior” F-Type remains a British thoroughbred through and through – and is arguably closer in spirit to the iconic E-Type Series 1 than any of its siblings. DM

Not exactly a lightweight. Ridiculous boot.