Winnie Madikizela-Mandela: The world reacts to the death of a lioness 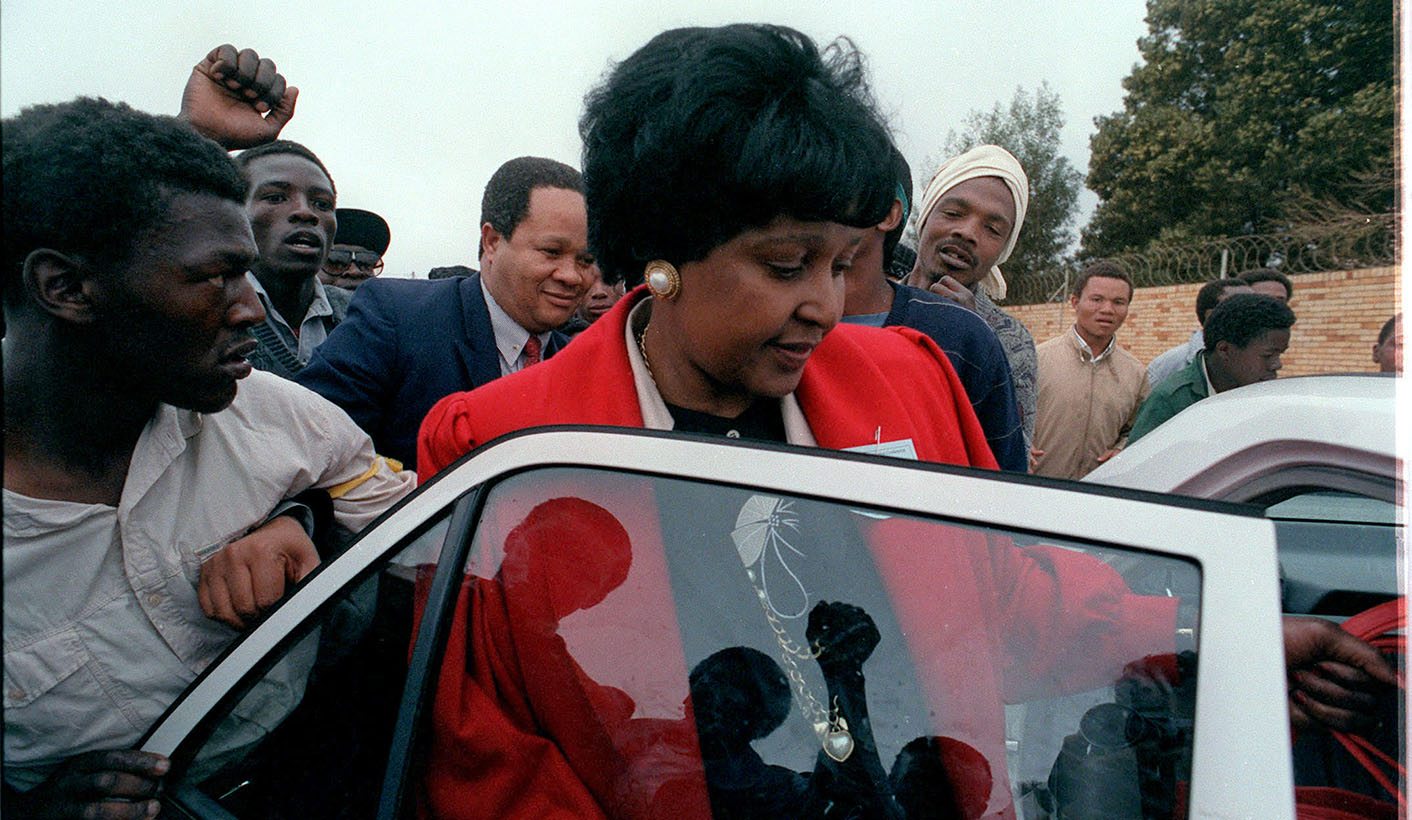 Easter Monday saw the death of a South African woman so famous she could be referred to by just one name: Winnie. In the hours following the confirmation of Winnie Madikizela-Mandela’s passing at 81, tributes and reaction locally and from around the world poured in to honour – and sometimes criticise – the anti-apartheid icon. By REBECCA DAVIS and BHEKI SIMELANE.

The crowd of mourners gathered outside Winnie Madikizela-Mandela’s Soweto home on Monday evening was evidence of a woman who remained adored by millions of South Africans until the end of her life.

“It will take eternity to get someone like her. We aspired to have a female president because of her.”

To Emily Mafunda, Madikizela-Mandela was “a true fighter. A true imbokodo. A dignified mother. A role model.”

Talking to Soweto residents, Daily Maverick found no hint of the conflict and ambivalence which had characterised Madikizela-Mandela’s later political life – only grief.

ANC leaders also made no mention of the turbulent relationship that Madikizela-Mandela had experienced with the ruling party in recent years.

President Cyril Ramaphosa spoke of the sense of national loss at the passing of “a mother, a grandmother, a friend, a comrade, a leader, and an icon”.

In a press briefing on Monday afternoon, Mineral Resources Minister Gwede Mantashe said her “guidance” would be missed, and commended the fact that she was one of the stalwarts not afraid to voice criticism of the ruling party.

ANC Secretary-General Ace Magashule told the nation in a live broadcast on Monday evening that during the post-apartheid era, Madikizela-Mandela was a “voice of reason” and a “champion of the voiceless”.

Reference to Madikizela-Mandela’s frequent absences from Parliament – despite holding the post of ANC MP – was made in a statement by the ANC parliamentary caucus.

“Though we submitted numerous motions for leave of absence on her behalf owing to her ill-health, which Parliament gladly granted, we remained hopeful and optimistic that she would come back and continue to lead us in Parliament,” it read.

Despite Madikizela-Mandela’s health issues, her death at this time was unexpected. A family spokesperson told Monday’s press conference that her death was “not predicted”, and that the family was still in shock.

Madikizela-Mandela had been well enough to attend both Good Friday and Easter Sunday services at a church in Soweto. Madikizela-Mandela’s granddaughter Zoleka Mandela had shared photographs of her grandmother attending church over the Easter weekend.

Archbishop Emeritus Desmond Tutu called Madikizela-Mandela “a defining symbol of the struggle against apartheid”. Though Madikizela-Mandela was strongly critical of his commitment to rainbow nation politics in recent years, Tutu said in a statement on Monday that “her courageous defiance was deeply inspirational to me”.

Madikizela-Mandela was remembered in death as not just a Struggle hero but also a figure of strength for the feminist movement.

Parliament’s Baleka Mbete and Thandi Modise described her as “a torch-bearer to gender mainstreaming, and an inspiration to millions of downtrodden women across the length and breadth of the country, across the continent and the world”.

The ANC Women’s League said: “She will forever remain an encouraging figure in the fight against patriarchy and male chauvinism in and outside politics.”

Speaking to eNCA, United Democratic Front leader Bantu Holomisa said Madikizela-Mandela “showed the women of South Africa that you don’t have to carry a gun or be a man in order to liberate this society”.

Maimane said that as a child he grew up hearing about Winnie Mandela, and as an adult had the chance to meet her and get a sense of her “enormity”.

The question to take forward, Maimane said, is: “How do we enhance the values she lived for?”

EFF leader Julius Malema, who had a very close relationship with Madikizela-Mandela, tweeted a series of broken heart emojis and a black square. Madikizela-Mandela spoke in defence of Malema at his disciplinary hearing prior to the former ANC Youth League leader being expelled from the ANC.

“As the EFF we are deeply saddened by the passing of Mama Winnie Nomzamo Madikizela-Mandela because, of all the struggle stalwarts, she was one of the people who was not ashamed to be seen with the leadership of the Economic Freedom Fighters.”

For African Democratic Change leader and former ANC MP Makhosi Khoza, the loss of Madikizela-Mandela was a very personal blow.

“When I was facing persecution, she was phoning me on a daily basis,” she told Timeslive. “She actually gave me the strength to go on.”

Not all responses to Madikizela-Mandela’s life were so positive, with international media outlets carrying particularly jaundiced responses. In overseas press coverage there was a focus on her failed marriage to Nelson Mandela, while some outlets adopted a strongly critical tone.

Reuters termed Madikizela-Mandela “a ruthless ideologue prepared to sacrifice laws and lives in pursuit of revolution and redress”.

The New York Times, meanwhile, led with the claim that Madikizela-Mandela “grew to resent being overshadowed” by Nelson Mandela.

From prominent individuals worldwide, however, tributes also poured in.

“In the darkest hours of the struggle to free South Africa, with Nelson Mandela in prison, the face of hope and courage was Winnie Mandela,” Reverend Jesse Jackson tweeted.

Celebrities including model Naomi Campbell and actors Idris Elba and Viola Davis added their voices to the chorus.

In the US, Democratic congresswoman Maxine Waters mourned the loss of her “dear friend and one of the greatest leaders and activists in the world”.

Yet among European and North American heads of state, reaction initially seemed slow – perhaps due to the Easter weekend.

From the African continent, response was more swift. African Union president Moussa Faki Mahamat said that the AU “joins the continent and beyond in grief at the passing of Ma Winnie Madikizela-Mandela who will forever be remembered as a global icon, a fearless campaigner”.

It was the Nelson Mandela Foundation which perhaps best succeeded in capturing the complexity of Madikizela-Mandela’s legacy.

“All South Africans are indebted to Mama Winnie, whether they acknowledge it or not,” said chair Njabulo Ndebele.

“From the witness of her life, we knew we could stand tall; we knew also we could falter and stumble. Either condition was an affirmation of life.” DM