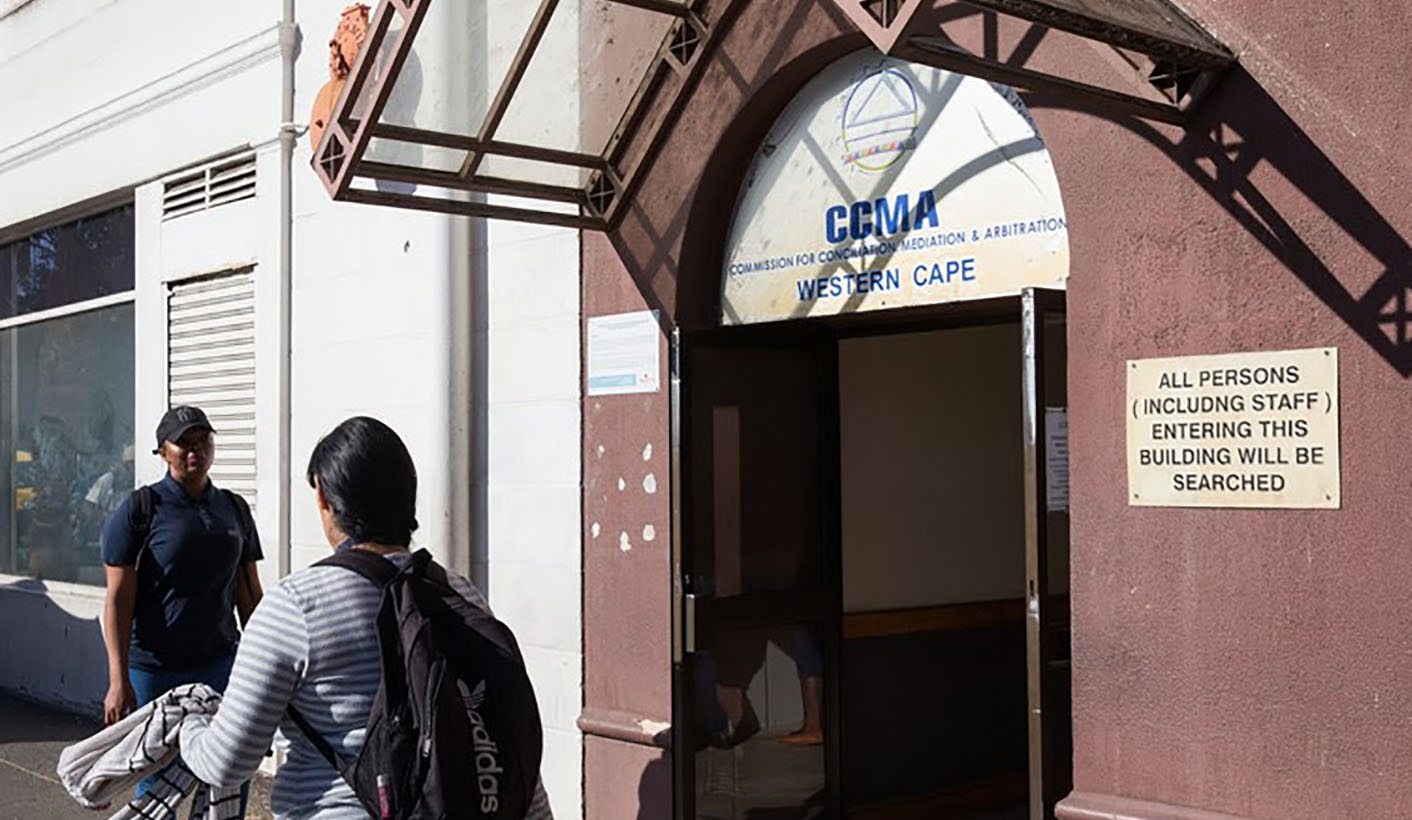 Employees who faced racial discrimination didn’t get the legal niceties correct at the CCMA, but that shouldn’t prejudice them. By Ohene Yaw Ampofo-Anti for GROUNDUP.

Workers who believe they have lost their jobs unfairly can go to the Commission for Conciliation Mediation and Arbitration (CCMA) to seek justice. There they can try to reach a conciliation (either through agreement or arbitration) with their employer, assisted by a CCMA commissioner. It is affordable because the workers do not need legal representation.

But what if the workers do not understand the law well enough to represent themselves? And what then if the conciliation is unsuccessful, and they take the case to the Labour Court and lose (either at the Labour Court or Labour Appeal Court) because they got the technicalities wrong at the CCMA? This was the subject of a recent Constitutional Court decision.

On 27 February the Constitutional Court handed down judgment in a case that clarifies the correct interpretation of rules governing the CCMA and how a Court should determine whether a dispute has in fact been conciliated before being heard by the Labour Court. The case is good news for employees and laypeople who do not understand the niceties of law generally.

The applicants in the case were a group of employees — Theo September, Dean September and Roland Paulsen — who alleged that their employer — CMI Business Enterprise — had racially discriminated against them. For example the employees alleged that they had been called racial slurs such as “kaffirs” or “bushies”; received inferior accommodation to their white counterparts during work-related travelling; and had been subjected to physical abuse at the hands of their employer. The employees said that they were the only black employees at the company. Because of this the employees resigned via a text message which told their employer that they could no longer continue to work under such conditions.

The dispute was initially referred for conciliation at the CCMA. After this was unsuccessful, the employees approached the Labour Court for relief and it ruled in their favour. However, the employer appealed to the Labour Appeal Court which overturned the decision.

The Constitutional Court had to decide whether the Labour Appeal Court’s decision was correct. It had to consider two central issues. First, whether the dispute had in fact been conciliated in the CCMA before being heard by the Labour Court. Second, whether certain rules of the CCMA prohibit a court from referring to evidence of what was discussed during the conciliation process. But was the case conciliated in the CCMA?

To answer this question, the Constitutional Court had to decide what the real dispute between the parties was and whether this dispute had been conciliated. A majority of the judges found that one of the functions of a CCMA Commissioner is to investigate and identify the nature of the dispute. This finding differed from the approach adopted by the Labour Appeal Court which found that to decide what the real dispute is between the parties, a court may only use two pieces of evidence: the referral form submitted by an employee to the CCMA and the certificate of outcome which is issued by the Commissioner.

In the referral form, the employees said that their dispute related to “unfair discrimination” and wanted their employer to stop discriminating against them. The employees alleged however that during the conciliation it became apparent that there dispute actually related to a constructive dismissal.

A constructive dismissal occurs when an employee is not formally dismissed by their employer. Rather, it is the employee who resigns because of intolerable work conditions which are as a direct result of the employer’s conduct. This is a special category of dismissal which our law recognises to protect employees who would have continued working, but for their intolerable work conditions. In the eyes of the law, this is a resignation only in name and not in substance.

What complicated matters in the present case is that the employees did not specifically refer to a “dismissal” let alone a “constructive dismissal” in their referral form. Also, after a conciliation has concluded, the CCMA commissioner must issue a certificate of outcome. In this case, the certificate of outcome also did not refer to a “dismissal”. Instead, it stated that the conciliation related to a case of “unfair discrimination.” In fact, the employees only indicated that their matter related to a “dismissal” when they filed papers in the Labour Court.

In the Constitutional Court, a majority of the judges rejected the Labour Appeal Court’s approach for two main reasons. First, the Court found that its approach was too formalistic and not consistent with the purpose of the legislation. The court found that the purpose of the legislation was to protect the fundamental right to fair labour practices and ensure the speedy and effective resolution of labour disputes.

The court adopted a substance over form approach where it looks at all the available evidence to understand the real nature of the dispute. From the facts of the case it was clear that the employees had resigned because of continued acts of racial discrimination from their employer, ie acts of unfair discrimination. They were in effect constructively dismissed.

The second reason is that the court found it should be mindful that employees are laypeople. The court highlighted that the concept of “constructive dismissal” is legalese which lay people would not have been aware of. Also, because approaching the CCMA is free, it was clear that the employees had not obtained any legal advice and were not well acquainted with the niceties of labour law. Instead they relied on the CCMA and its officials for guidance.

The Constitutional Court decided that it is for the CCMA commissioner to actively determine the real nature of the dispute and reflect this in the certificate of outcome. Importantly however, the Court also found that even if this certificate does not reflect the true nature of the dispute, a court is not bound by this and may still refer to additional evidence at its disposal.

May the court refer to evidence which was led during the conciliation?

The Constitutional Court found that, as a general rule, evidence discussed during the conciliation is confidential and may not be disclosed at a later stage. But the court also found that the purpose of this rule is to enable early settlement of disputes and avoid costly litigation. So the court found that evidence that is unrelated to the objective of conciliation, which is reaching a settlement, is not confidential.

The court found that evidence related to the nature of the dispute is merely descriptive and not part of the substance of the settlement negotiations. The court therefore rejected the Labour Appeal Court’s finding that evidence from conciliation proceedings may never be disclosed at a later stage. A majority of the judges dismissed the employer’s appeal. They made no costs order. The majority decision was written by Judge Leona Theron.

Judge Raymond Zondo dissented and upheld the Labour Appeal Court’s decision. The court found that on the facts a dismissal dispute had never been conciliated at the CCMA; the issue of a constructive dismissal had only been “discussed”, but not properly referred to it. In the judge’s view one could only determine whether a dispute had been referred to conciliation based on the referral form. Importantly, the judge pointed out that the referral form neither made mention of the words “dismissal” nor “resignation”. The minority also rejected the assertion that this was a formalistic approach. In its view, the CCMA process was straightforward and user-friendly and the employees had ample opportunity to properly express what kind of dispute they had referred for conciliation.

In practice what this judgment means is that the rule that certain kinds of labour disputes must first be referred for conciliation before they can be adjudicated by the Labour Court remains unchanged. However, what does change is that a court may refer to all the evidence at its disposal, including what transpired during the conciliation, to determine what the real nature of the dispute was and whether it was in fact conciliated.

This is of great use to employees, many of whom are lay people, and do not fully understand the niceties of labour law. A court will no longer be bound by the nature of the dispute as described by a lay person in the referral form. Instead, it should adopt a substance over form approach to satisfy itself what the real nature of the dispute was. DM

Photo: The offices of the Commission for Conciliation Mediation and Arbitration (CCMA) in Darling Street, Cape Town. Photo: Ashraf Hendricks