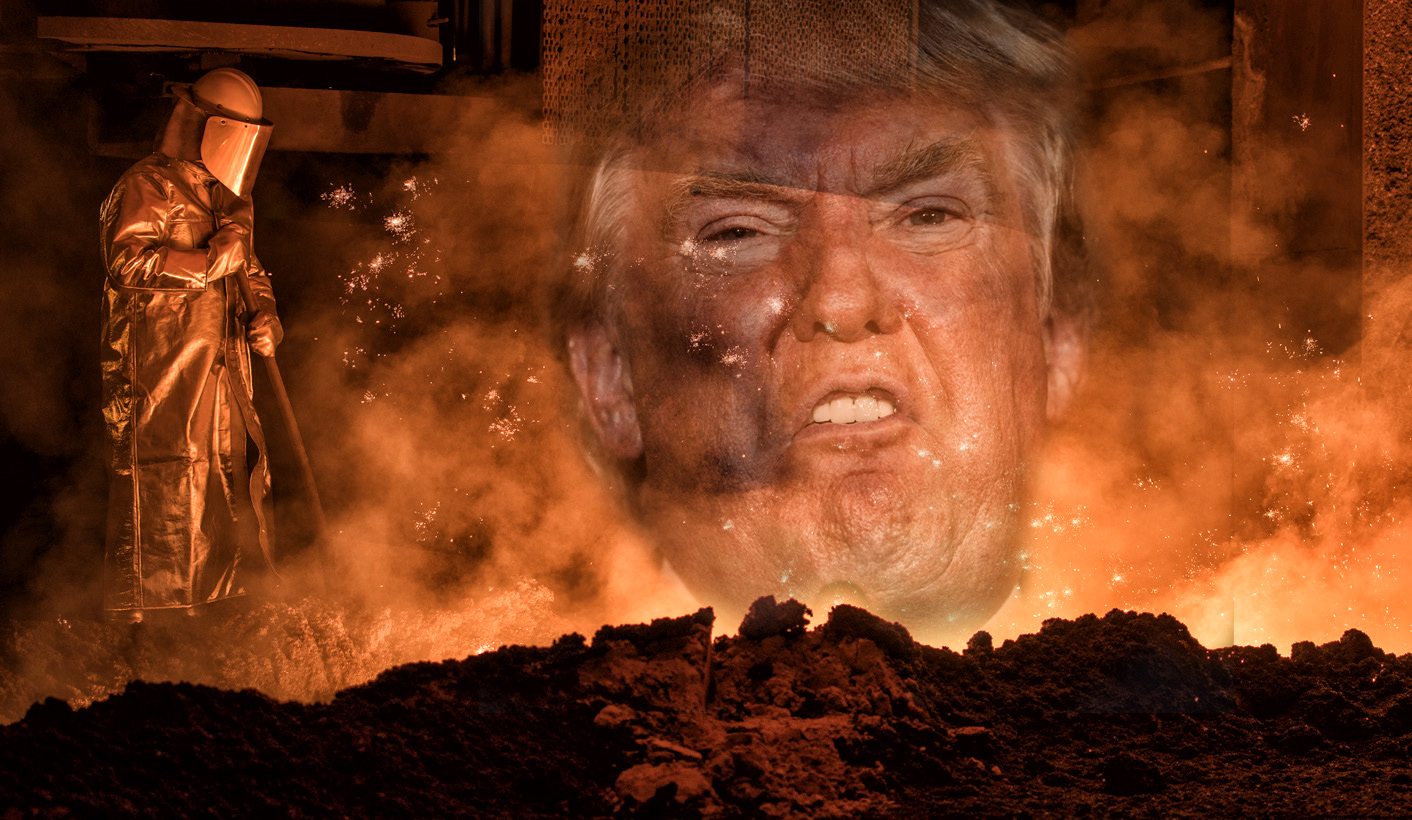 South Africa is in danger of becoming just one of the “ants” which get squashed in the global trade war among “elephants” as a result of US President Donald Trump slapping tariffs on steel and aluminium imports. By PETER FABRICIUS.

South Africa is in danger of becoming just one of the “ants” which get squashed in the global trade war among “elephants”. This is feared as a result of Trump slapping a 25% tariff on steel imports and a 10% tariff on aluminium imports into the US on Friday, Minister of Trade and Industry Rob Davies told journalists on Monday.

But he also held out some hope that South Africa could be exempted from the measures. He said that deputy US Trade Representative CJ Mahoney had told him in a teleconference last Thursday that the acceptance of quotas by SA steel and aluminium producers would be one thing Trump would consider in deciding whether or not to exempt South Africa from the new tariffs.

Davies said at a press conference that he had met the steel and aluminium producers earlier in the day and that they were “prepared to talk about quotas”.

Davies said the producers would individually engage the US government and he would have another teleconference with Mahoney soon to present the South African position.

The minister said he could not anticipate what quotas would be offered but suggested that the South African producers would not propose to “significantly enlarge” their exports to the US.

He said the days were long gone when South Africa could hope to pump significant volumes of value-added exports into the developed world. This was both because those markets were no longer growing fast but also because of their rising standards and regulations on imports.

The future for South African exports lay elsewhere, especially in Africa, Davies said. At the same press conference he stressed that South Africa was fully committed to the African Continental Free Trade Area (AfCFTA) agreement which was signed by 44 of Africa’s 55 states last week. South Africa did not sign, but only because it has not completed consultations with all stakeholders.

Davies said when his government realised that South Africa was not one of the countries which the US was exempting from the large steel and aluminium tariffs, he wrote to US Trade Representative Robert Lighthizer to appeal for an exemption. Davies pointed out that South African aluminium and steel imports posed no threats to US producers. SA exports of aluminium products per annum were equivalent to about 1.6% of total US aluminium imports.

“These products consist of specialied aluminium sheet, coil and plate for processing in the US automotives, battery and aerospace industries.

“The US Census Bureau data indicates that in 2017 the US imported a total of 33.4 million tons of steel, of which imports from SA were approximately 330,000 tons or less than 1% of total US imports and 0.3% of total US steel demand of 107 million tons.

“As such, SA does not a pose a threat to US national security and to the US steel and aluminium industries but is a source of strategic primary and secondary products used in further value added manufacturing in the US, contributing to jobs in both countries.

“Furthermore, SA assured the US that to a very large extent, the inputs for all steel and aluminium product exports to the US are sourced from local producers and that SA has a robust customs control system which prevents circumvention.”

Davies also pointed out that some of the aluminium and steel products which South Africa exports to the US are covered by the African Growth and Opportunity Act (AGOA) and the General System of Preferences (GSP) .

AGOA gives South Africa and other qualified African countries duty-free access to the US market for most products while GSP gives it better import tariffs than the average country enjoys.

The minister said that in his teleconference with Mahoney on Thursday the deputy US trade representative had told him the US would be looking at other criteria, apart from quotas, in considering whether or not to exempt South Africa from the new higher tariffs.

These would include assurances that South Africa would not allow itself to be used as a trans shipment country to the US for steel and aluminium produced in other countries, if the US exempted it from the new tariffs.

Mahoney also asked him what South Africa was doing about the global glut in steel production.

“The domestic steel sector has been severely impacted by low priced steel and steel product imports and as a result SA has implemented a number of trade remedy measures,” he had said in a statement.

“In addition, SA supports and participates in the Organisation for Economic Co-operation and Development (OECD) and G20 multilateral process to achieve outcomes of a fair, sustainable and viable steel industry in the future.”

Davies said on Monday that Mahoney had asked South Africa “to put its best case” for being exempted from the new import tariffs, and it would do that.

Mahoney told him that President Trump himself would make the decision on whether or not to exempt South Africa and would do so by the end of April.

He also pointed out that although exports to the US did not constitute a very large percentage of the overall production of South African steel and aluminium producers, a few companies could be affected and thousands of jobs could be lost because of Trump’s new tariffs.

Davies said that he was sure that South Africa was not in any country’s sights in the global trade war that is being forecast as a result of Trump’s substantial increase of trade tariffs.

“But we know that when the elephants fight, the ants take a pounding. That’s what would happen to us. We would not welcome it.” DM

Photo: A steelworker is seen at the blast furnace from the Salzgitter AG in Salzgitter, Germany, 22 March 2018. EPA-EFE/David Hecker