DA Federal Congress: No leadership contest but party set to spar about race 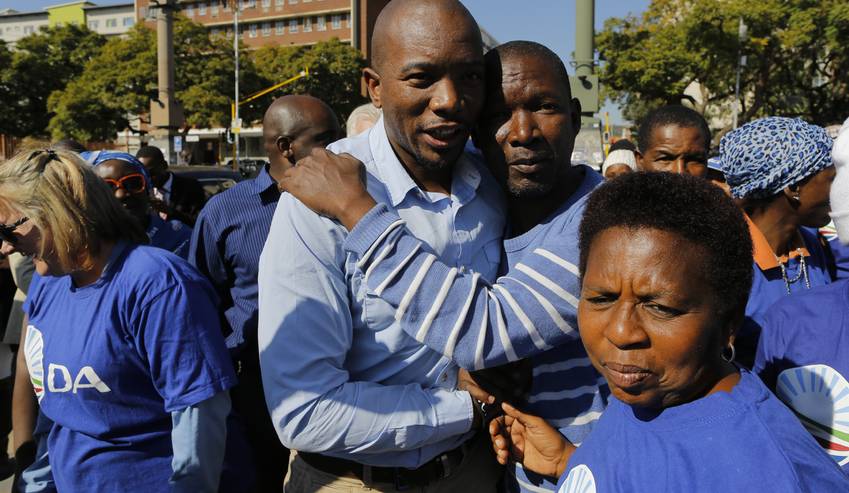 Two weeks ahead of its federal congress in Gauteng, there is a new war of words in the Democratic Alliance about race and gender, with some saying party leader Mmusi Maimane’s proposed constitutional amendments will make the DA indistinguishable from the ANC. Judging from what’s out there already, a heated debate lies ahead. By CARIEN DU PLESSIS.

DA leader Mmusi Maimane wants to steer his party in a different direction when it comes to the way it defines race. He is championing an amendment (one of 105 compiled by the DA’s Constitutional Review Committee) that relates to racial diversity, to form the fourth pillar of the DA’s Values Charter, currently based on “freedom, fairness and opportunity”.

The debate around his proposal reveals a party grappling with how to define itself differently from the ANC, following the departure of President Jacob Zuma. Zuma’s alleged corruption has been a rallying point for opposition parties over the past nine years, which has seen their support grow significantly.

Maimane’s proposal is to add the following new clause to chapter one of the party’s constitution:

“South Africa is a richly diverse society. Its people come from different origins, worship in different ways, have different cultures and customs;

Diversity is one of South Africans richest assets. The Party celebrates diversity and strives to ensure that every group, every language, every religion and every traditional custom is respected and upheld;

The Party solemnly subscribes to the preamble to the Constitution of South Africa that ‘South Africa belongs to all who live in it, united in diversity’;

The Party will to the best of its ability attempt to replicate diversity in its own ranks.”

Two of the party’s MPs, Gavin Davis and Michael Cardo, however, wrote a note directed at conference delegates entitled “Real progressives reject groupthink” to convince them to reject the amendment .

On the race matter, they said it seemed like a welcome addition to the DA’s constitution at first glance. “Diversity has long been a cherished value of the party. We have always recognised that diversity is a strength, and we have taken steps to actively promote it.”

But they said the way the clause was formulated “does very little to distinguish the DA from the ANC’s doctrine of racial representivity.”

They said the ANC’s view of “representivity” meant the demographic breakdown of an organisation had to mirror the population as a whole, meaning “the job of each person in the organisation is to represent the racial category that apartheid imposed on them, with little room for individual agency or personal autonomy.”

They said diversity, however, was rooted “in the liberal notion of the primacy of the individual” and that, in the DA, “we don’t believe that people are the mere sums of their demographic parts”.

Diversity meant drawing on the contributions of people with different backgrounds and perspectives, but they said no two people had the same views, “even if they share certain ascriptive traits”.

They said they had three problems with Maimane’s proposed amendments.

Firstly, the amendment mentioned different groups, cultures, religions and languages “but says nothing about how free-thinking individuals add to the diversity of the organisation”.

Secondly, “the proposed amendment says nothing of the need to protect the individual from dominance by others in the name of culture, religion or race”. When a group or traditional custom overrides the rights of an individual, they said, these should not be upheld as proposed in the amendment.

Thirdly, they said, to “replicate diversity” in the DA’s ranks was “a significant departure from the DA’s value of non-racial diversity, and a tentative step closer to the ANC’s doctrine of racial representivity”.

This would bring the party on “a slippery slope towards ANC-style race quotas to ensure ‘diversity’ is ‘replicated’ in the DA. This is racial representivity by another name, and we should reject it.”

Davis and Cardo said they did not agree with what has been reported as a “progressive” group incorporating the “black caucus”, which has reported to have been championing this amendment.

The two also took issue with the proposed amendment that “all female members will automatically be members of the Democratic Alliance Women’s Network unless they indicate to the contrary”, an amendment, they said, which “follows the same trend towards ANC-style representivity” and which could curtail the free choice of individuals to “self-identify as whatever they like”.

The party’s deputy chief whip in the KwaZulu-Natal caucus, Hlanganani Gumbi, however, hit back at Davis and Cardo on the race issue, with a letter directed to them and copied to congress delegates. In the letter they bemoaned the continuing lack of black people in leadership structures, and said it was ironic that, out of the 2000 people that will attend the DA’s conference in two weeks’ time, there would be no branch delegates from predominantly black areas like Soweto, where Maimane hails from, Zululand or uMkhanyakude in KwaZulu-Natal at the congress.

He said Maimane’s proposed amendments would be supported by a large group of people in the party, but he didn’t want to call this a “black caucus” because this narrative “seeks to discredit individuals negatively before they have even proposed an argument”. While, he said, black members of the party were being labelled thus in media reports, “our white counterparts do not have to suffer the indignity of being labelled”.

He said there were groups of individuals in the party “who have common thought and ideas on varied issues at different times” and they were “free-thinking individuals”.

Gumbi said he didn’t believe the ANC’s notion of “racial representivity”, but he did agree with former party strategist Ryan Coetzee’s assertion in 2006 that the diversity of South Africa should be on display “when one looks at the colour of our leadership and public representatives overall”.

Gumbi continued: “I would venture into arguing that all too often, the diversity of South Africa is not on display in too many areas of our party nor do we bring into decision making people of wide ranging experiences. This not only becomes an affront to many people left out, but further makes it questionable to what extent do we take diversity seriously.”

He said Coetzee also said the “litmus test for who we are as a party is by identifying what makes us angry, and who that matters to”.

He said: “This brings me to ask the question, does it make us angry in the DA if in a process to choose our parliamentary public representatives, which includes hundreds of thousands of members, newspaper adverts across the country and sophisticated communication networks, that the outcome is a parliamentary caucus most would argue is not diverse.

“That in 2016 we just recently celebrated our first black female executive director in the party – wait – first black executive director ever. That the professional leadership of our party surely didn’t bring diverse backgrounds into decision making nor reflect the diversity of South Africa when the national campaigns team in the last election didn’t have a single black Africa or Indian person in the team.

“Just recently, in my very own home city, of the eleven elected caucus exco members of eThekwini, not a single one is black. And so the trend continues, not only on race but very often even with gender.”

He said the defence made by Davis and Cardo against the proposed amendment was often used to justify the status quo, by saying so-and-so was best for the job. This was the worst form of “group think”, he said, “which presumes that systems, structures and people’s inherent biases which produces the same results in often urban ‘white males’ in nearly every eventuality regardless of the changing environment is a natural element of hard work and using ones opportunities”.

He said “to believe this would be to shatter the feelings and discard the talents of so many who have put themselves forward and have been worthy too”.

Gumbi said he stood by Maimane. “We must recommit our organisation to truly embracing diversity. In a diverse organisation, there is room for everyone to be at home and reach their potential. It does not exclude anyone, it brings people on board.”

Maimane, who was elected party leader in 2015, will run for the position again this year, uncontested. DM