The Other News Round-Up: Broad Horizons 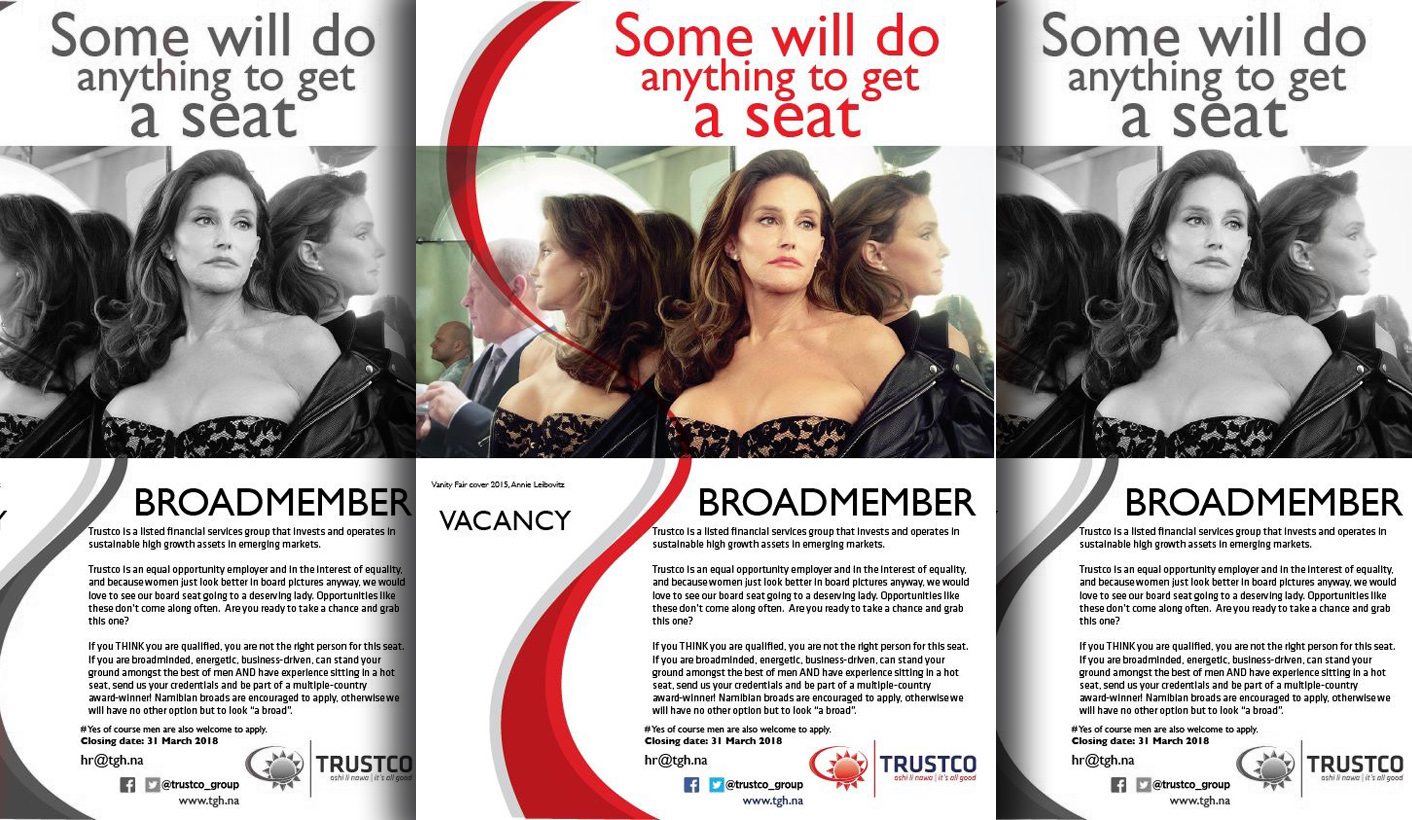 Each week, Daily Maverick rounds up the news that would have made more headlines if more people could believe it. This week: Trustco’s broad-based empowerment ad. By MARELISE VAN DER MERWE.

I didn’t really fancy writing the heavy stuff two weeks in a row, but you have Trustco to thank. Next week we’ll be back to three-legged kittens or something, pinky swear.

Till then: Trustco might want to change its name to Distrustco after posting the job ad of the century. Not since I heard, years ago, that a student had mistakenly written that misogyny was “sexiest”, have I seen such a valiant attempt to glam up sexism.

The ad calls for applications for the position of “broad member”, which, in case you’re one of the more simple-minded womenfolk who missed the punnage, is a female board member. Next to this, it has a picture of Caitlyn Jenner, staring wistfully into the distance, alongside the slogan: “Some will do anything to get a seat.”

I’m willing to bet at least one beer Caitlyn hasn’t approved the use of her image for this. But in fairness, I haven’t checked, and I hope Caitlyn has better things to do than chase down badly-behaved Namibian employers. It’s a perfectly reasonable premise for a joke, right? Considering trans people are not at all marginalised and loads of folks are lining up for gender reassignment surgery just for the LOLs.

Trustco, it hastens to remind us in the ad, is a JSE-listed company operating in sustainable high-growth assets in emerging markets. You’d think this might give it more understanding of the needs of marginalised groups.

“In the interest of equality, and because women just look better in board pictures anyway, we’d love to see our board seat going to a deserving lady,” it says.

“If you THINK you are qualified, you are not the right person for this seat.

(Yes, womanfool, what were you thinking?)

“If you… can stand your ground among the best of men… send us your credentials” (no comment).

“Namibian broads are encouraged to apply… otherwise we will have no choice but to look a broad.”

Look a broad! I’m picturing the high fives and knee-slapping around the boardroom table at this point. What larks, Pip! All that and equality too! Were there any women present, I wonder? If there are any women on the payroll, were they silently sticking their heads in a bucket and waiting for it all to pass? Oh, Trustco. How much you have to learn.

Trustco is not the only large company to have done this sort of thing recently. In January this year, a job ad placed in the Guardian was hastily removed after it called for a candidate who was educated with “good spelling” but could “deal with male banter”.

“There aren’t many job advertisements that speak of time travel. Yet an astonishing vacancy posted by a property investment firm in Mayfair has achieved just that, appearing to request that whoever applies to be its new “Executive Assistant & Investor Relations Associate” is prepared to transport themselves back to the 1950s,” wrote Guy Kelly in the Telegraph.

The candidate, it adds, must be “bright and emotionally intelligent” and also “patient”.

My colleague Tony Jackman, bless him (because Daily Maverick is an equal opportunity employer) was suitably horrified and delved into the depths of the internet to find other examples of sexist advertising – not necessarily job ads.

“Not that women aren’t capable of doing their own Googling,” he said drily. “But have you seen this?”

“This” turned out to be several examples of sexist advertising. Intrigued, I dug a little further. Between the two of us, we came up with a list as long as both our arms put together. Some of our favourites were the vintage ones, which included a couple of product plugs that would be right up Trustco’s alley.

One marvellous sweater advert kindly acknowledged that women are “useful, even pleasant”, but that one doesn’t want “those drags” coming up the mountain with you when you’re hiking in your new jersey.

Another suggested you should remind your lady friend that “it’s a man’s world, and make her so happy it is”.

A famous one asks whether it’s “always illegal to kill a woman” (if she touches your favourite gadget, which in those days was a tragically rustic machine to die for).

More recently, sporting brands have come under fire left, right and centre. Cycling manufacturer Nytro has been forced to apologise after running a series of ads that encouraged women to “follow easily the men’s pace” with its new electronic Nytro road bikes, because naturally she can’t do it alone. Pinarello featured a woman complaining that she could not cycle with her fast, strong boyfriend, which caused an outcry on social media.

In 2017, Dutch footwear company Bianco tried by standing up for equal pay. Great start. But they fell short by arguing that women need equal pay to afford nice hair, nice clothes, and expensive underwear. Because they “need a new outfit for every occasion” and because “the shoes make the outfit”.

“Oh, the joy of choosing the right shoe,” the ad went on. Before thoughtfully concluding: “Equal pay is not enough.”

One of the more perplexing backlashes was over a recent Heineken ad with the slogan “Moderate drinkers wanted”, which featured a chorus of women singing Bonnie Tyler’s “I Need a Hero” in response to a slew of men shown passed out in clubs. Some critics complained that the ad didn’t acknowledge women could outdrink men in the first place (!)

And Trustco? The advert has been removed from Facebook. But the company has issued a shining non-apology, saying:

“Trustco Group Holdings acknowledge the decision of Facebook to remove the latest advert circulated on Namibia’s largest social media platforms on inviting applications for the appointment of a Board Member.

“After an analysis of most comments and equally thanking the silent majority‚ Trustco wants to remind Namibians once again that considerate and measured dialogue is key to address Namibians’ pressing issues. Tolerance and respect should underpin the Namibian nationhood.” (It reminds Namibians, mind. Not itself.)

Ai, Trustco. What are we going to do with you? Ja, we know, you’re not operating in a vacuum. But that’s all the more reason to try being – to use phrasing you might understand – a little more broad-minded. DM