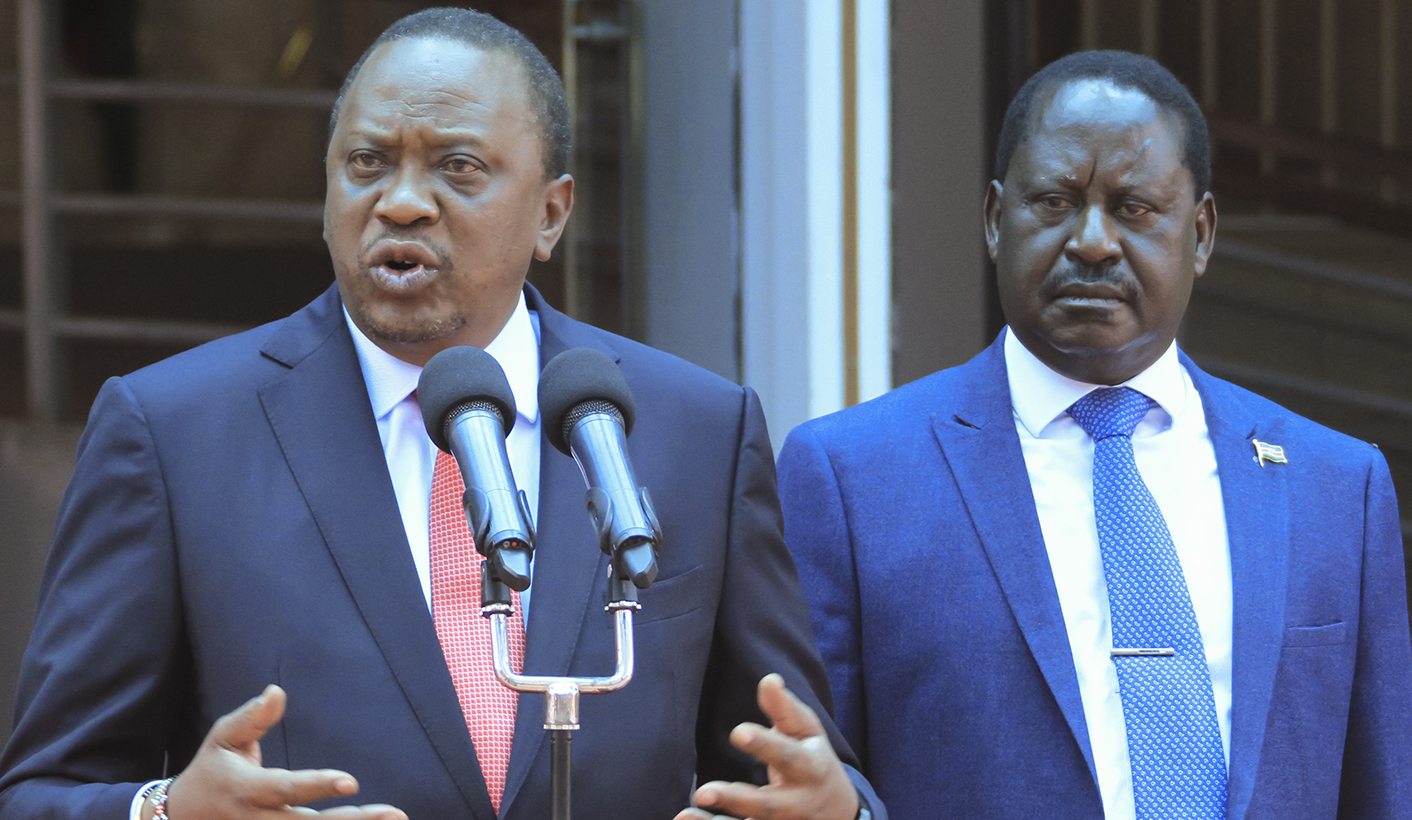 Is the Harambee House handshake a betrayal of the opposition or a sincere effort to unify Kenya? By Peter Fabricius for ISS TODAY.

The handshake between Kenyan President Uhuru Kenyatta and his arch-rival Raila Odinga on the steps of Harambee House – the office of the president – on 9 March has baffled even some of Odinga’s own political allies, let alone observers. After a long and bitter dispute – dating back to the judicially nullified first presidential elections on 8 August last year, and beyond – the two announced they had made up, were now “brothers” and would work together to unify a divided nation.

For Kenyatta, the benefits of the deal were obvious. It ended the months-long campaign of civil disobedience that Odinga launched after the repeat presidential election on 26 October last year, which he boycotted for lack of electoral reform. This campaign included having himself sworn in as the real “people’s president” on 30 January and establishing a People’s Assembly and the militant-sounding National Resistance Movement to oppose and delegitimise Kenyatta’s presidency.

The Harambee House deal conferred on Kenyatta the legitimacy he sorely needed as the country’s defused the potential for more violence, and fractured the opposition, giving his Jubilee party a much better chance in the 2022 elections. What Odinga gets out of the deal is less clear.

He has told his supporters that Kenyatta has agreed to pay compensation to the victims of last year’s electoral violence and their families. He also told them Kenyatta had agreed to drop charges laid against some opposition members for participating in the 30 January ceremony where Odinga swore an “oath” as “people’s president”. Some opposition leaders will also get back their confiscated passports.

More broadly, the text of the “peace pact”, as Odinga called it, gives him co-leadership with Kenyatta in tackling the country’s problems. These include reconciling ethnic and mending endemic corruption, lack of real devolution of power and violations of human rights.

Reaction to the deal has been mixed. While Kenyatta’s predominantly Kikuyu supporters have welcomed it, other groups, including Odinga’s own Luo, have been at best ambivalent. Odinga apparently acted without consulting his National Super Alliance partners who reportedly feel betrayed.

So what was Odinga’s thinking? Exiled National Resistance Movement “general” Miguna Miguna has suggested that at age 73, Odinga had just grown too old and tired to continue his long struggle for power. Others are more generous, believing he set aside personal ambition to help reconcile his Luo people with their historic rivals, the dominant Kikuyu, to help bring about the political reforms that Kenya desperately needs.

For the 9 March deal recalled Odinga’s 1997 “Trojan Horse” manoeuvre. Then, he also surprised his allies by “reconciling” his Luo community with the 20-year-old regime of Daniel Moi, whom the opposition was trying to unseat.

In both cases, suspect personal rather than advancing his community. They believe that this time he did the deal with Kenyatta to maintain the initiative in the opposition by pre-empting some of his National Super Alliance colleagues, whom he suspected of plotting their own deals with Kenyatta.

Others believe side lining Kenyatta’s vice president – the widely distrusted William Ruto of the Kalenjin community and a likely in the next elections – was both Kenyatta and Odinga’s major motivation. Many Kenyans would agree with political cartoonist and commentator Patrick Gathara that this was just another Harambee House deal between leaders for their own benefit, marginalising the interests of the long-suffering “” – the plebs.

Gathara wrote in the Washington Post that the deal had really changed nothing. The election remained contested, the election system was still a “shambles; the police are still a partisan, brutal and corrupt lot, and justice for protesters maimed or killed by security forces… remains elusive; the state remains unequivocally colonial, and its destructive and politics are undiluted… Kenya has been here before. Agreements between political foes have long substituted for real action to address the underlying, fundamental and systemic issues that our polity and turn elections into death duels”.

The most notable such deal was the 2008 National Accord and Reconciliation Act that followed the terrible violence after the clearly rigged December 2007 elections – which Odinga lost to Mwai Kibaki and in which nearly 2,000 people died.

One wonders – if that major trauma wasn’t enough to jolt Kenyans into burying the machete, why would the latest Harambee House deal do so? For in a certain sense the new deal is 2008-lite. The 2008 deal was sealed by giving Odinga the newly created post of prime minister to Kibaki’s president. In the 9 March 2018 deal, Kenyatta and Odinga have agreed to “roll out a programme that will implement their shared objectives. The programme shall establish an office and retain a retinue of advisers to assist in this implementation”.

So in an informal sense, Odinga has once again been given the job of “prime minister” – or effectively “co-president”, as one analyst put it.

In a prescient – or was it persuasive? – essay in January, Mark Bellamy, former US ambassador to Kenya and now a senior adviser to the Africa Programme at the Centre for Strategic and International Studies in Washington, DC, advocated just the sort of deal that Kenyatta and Odinga have now entered into.

He dished out the blame fairly evenly for the crisis. He suggested that Kenyatta would have won the first election on 8 August even without the irregularities that persuaded the Supreme Court to annul it. But he said Kenyatta blundered by “savaging” the court verbally and introducing legislation to restrict the autonomy of the court and the Independent Electoral and Boundaries Commission in overseeing future elections. Kenyatta had thereby lent credibility to Odinga’s charge of fraud.

Bellamy also blamed Odinga for lacking a clear strategy after boycotting October’s second elections. Instead of “guerrilla tactics” Odinga should use his “limited leverage to demand deep political reforms to counter the dictatorial tendencies he decried”. He suggested that Kenyatta “might be willing to give Odinga a leadership role in such an effort in exchange for Odinga’s willingness to ‘move on’”.

There are some suggestions that US players – perhaps Bellamy’s essay itself – might have influenced the 9 March deal and that it wasn’t coincidental that it happened just before former secretary of state Rex Tillerson arrived in Nairobi on an official visit.

Some Kenyan analysts doubt that Kenyatta will in fact surrender to Odinga any real leadership under the new deal, fearing that given an inch he’ll take a mile. But if the stability and economic development Washington desires are to be sustainable, the proposed joint action for democratic and electoral reform – including greater protection for media freedom and an end to ethnic chauvinism – will be critical.

The proof of the 9 March deal will be in whether the joint office Kenyatta and Odinga set up really does tackle these and the other fundamental challenges identified in the agreement. Kenya doesn’t need yet another Harambee House handshake over the same issues sometime in the future. DM