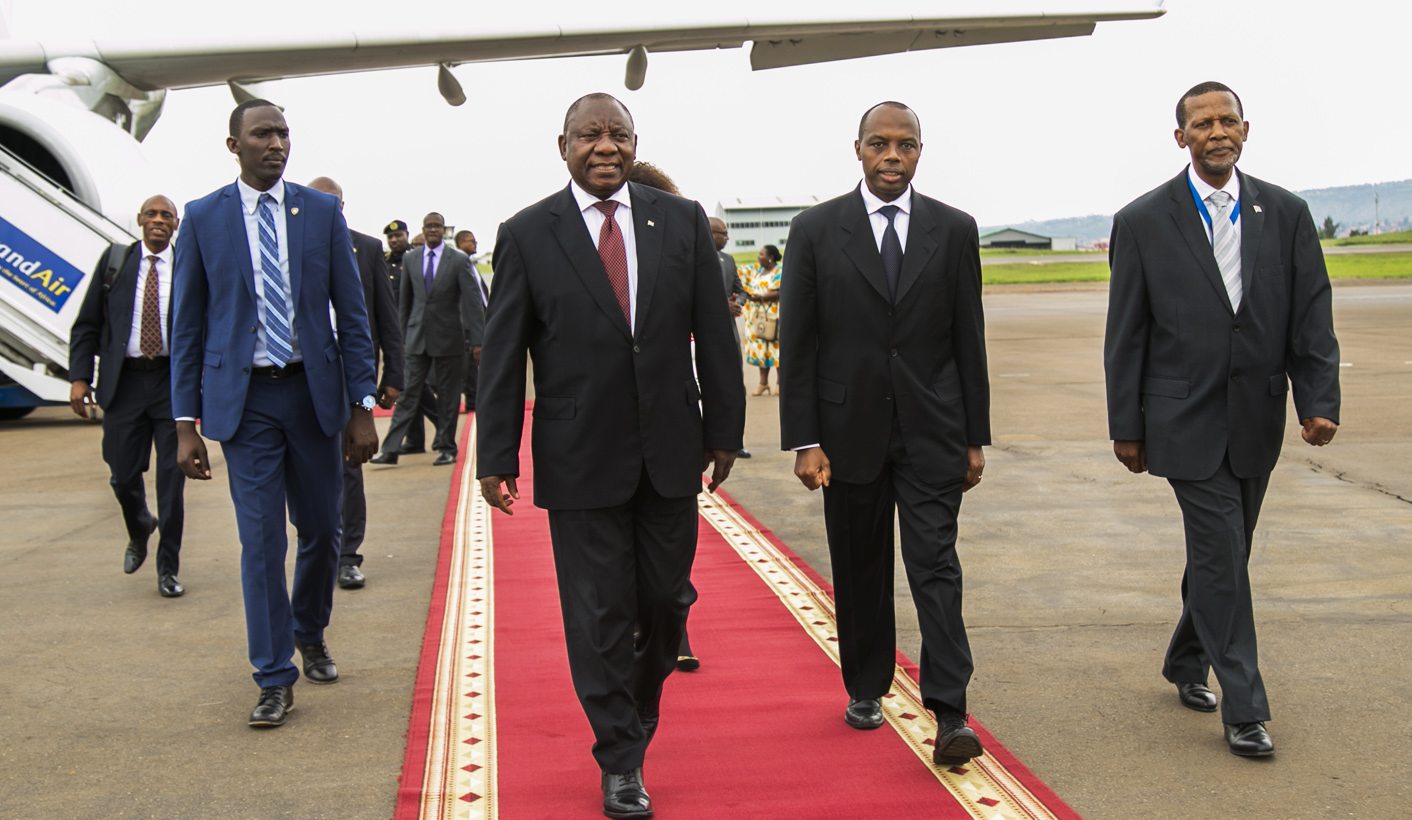 President Cyril Ramaphosa did not appear a stranger to the African Union as he strolled into the closing session of the African Continental Free Trade Area Business Forum in Kigali on Tuesday afternoon. In fact, there was a mild case of continental Ramaphoria in the audience of African businesspeople, politicians, officials and hangers-on as Ramaphosa declared:

“The issue of visas for Rwandese to South Africa, consider it as a matter that is solved.”

There were whoops and gasps from the room, then applause.

Just last month, former president Jacob Zuma wanted to hang on to the presidency a few months longer so he could introduce Ramaphosa to the AU and the Southern African Development Community.

Former Nigerian president Olusegun Obasanjo welcomed Ramaphosa warmly, and congratulated him, and also “all of the people in South Africa for their transition”.

A high-ranking member of the Nigerian delegation, when asked about his country’s views, said the rest of the continent shared in the South Africans’ relief at the transition.

At the close of the session with Ramaphosa, the announcer enthusiastically declared:

“Can you feel the change? Change is in the air!”

The normalising of South African relations with Rwanda, a month into his presidency, is a positive start to Ramaphosa’s foreign policy path. Relations have been strained since 2010 after Rwanda accused South Africa of harbouring Rwandan opposition leaders, and in 2014 diplomats on both sides were expelled and South Africa’s visa office closed when former Rwandan intelligence head Vincent Karegeya was found murdered in Johannesburg. (The Rwandans denied any involvement.)

Despite reports about improving relations over the past two years, this was difficult with Maite Nkoana-Mashabane still in the foreign relations portfolio. Rwandans felt she was too close to opposition defector, former Rwandan Armed Forces chief of staff, General Kayumba Nyamwasa. They both served in diplomatic postings in India more than a decade ago.

Ramaphosa, fresh off the plane, in his first meeting with Rwandan president Paul Kagame as head of state (they met in Davos in January too), pulled it off:

“I was talking earlier with President Kagame, and we have decided that we are going to put the relationship between South Africa and Rwanda on a much better footing,” he said. “And the gaps and challenges that we’ve had are going to be resolved and we’ve got two very outstanding, beautiful ministers of international relations who are going to work on this immediately,” he continued.

In an interview (a positive development – her predecessor rarely did this in her last few years) in her Kigali hotel suite, Sisulu denied that the bad relations were due to the leaders:

“This is a systemic problem in a way that both countries have dealt with very sensitive issues. Once we get down to discussing them, possibly a new leadership would have a new perspective, but these are long-standing issues that brought us to where we are.”

Asked whether she thought it would be easier to mend relations now that new leaders are in place, Sisulu, somewhat diplomatically, said:

“Perhaps a new leader will come with new resolve.”

Sisulu also explained some of the intricacies of the African Continental Free Trade Area agreement due to be signed in Kigali by AU heads of state on Wednesday. South Africa, had some objections on technicalities and deadlines, which she outlined, but she added South Africa would sign the agreement.

Sisulu sheepishly said it’s the first time that she’s had to cross so many t’s and dot so many i’s. Even though she’d been a minister since 2001 – of intelligence, housing, defence and public service and administration – continental diplomatic negotiations about the small print are new to her.

Photo: Minister of International Relations and Cooperation, Hon Lindiwe Sisulu, attending the meeting of the PRC and the 18th Extraordinary Session of the Executive Council in Kigali, Rwanda, 18 March 2018. (Jacoline Schoonees for Dirco)

Ramaphosa, meanwhile, held his own as part of a panel of economic experts – in fact, officials said he timed his SAA chartered flight in such a way that he’d be on time for this forum. It’s been a few years since South Africa had a president who could do that.

First there was some PR about the signing of the agreement being a historic one.

“This is a moment for the African continent,” Ramaphosa said.

“The free trade area for Africa is going to be like a flood, a free trade flood that is going to lift all the boats. It’s not so much about South Africa,” he said, with reference to the panel chair’s direct question, “but much more about all of us as countries of Africa.”

With this, Ramaphosa is perhaps signalling that he’s not only South Africa’s businessman-president (many in the continent have in the past questioned his motives for playing political envoy roles in countries where he was perceived to have business interests), but that he has the continental picture in mind. As a businessman, he must also be aware that South Africa is sometimes regarded on the continent as a bully.

Infrastructure needed to be rolled out, Ramaphosa said, and trade would follow, and there should be a single African currency. (This, incidentally, isn’t new, but there has been talk of it as an ultimate aim of the free trade area.)

Ramaphosa said the fixing of the Rwandan visa issue spoke to this goal of a free trade area and the free movement of people on the continent.

In the past few days he also completed a whirlwind tour of neighbouring countries in the Southern African Development Community, to lobby the region’s position. Quite helpfully the region has just agreed on the three representatives it would send to the 15-member ministerial support structure to the AU chairperson’s office as part of the continental body’s reforms. Just a few months ago SADC had major reservations.

Foreign affairs under Ramaphosa and Sisulu could be a lot more no-nonsense and businesslike, which could bring a mixture of good prospects and fresh challenges. DM