#GuptaLeaks Collateral Damage: KPMG SA makes a bold attempt at clawing itself out of an ethical hole 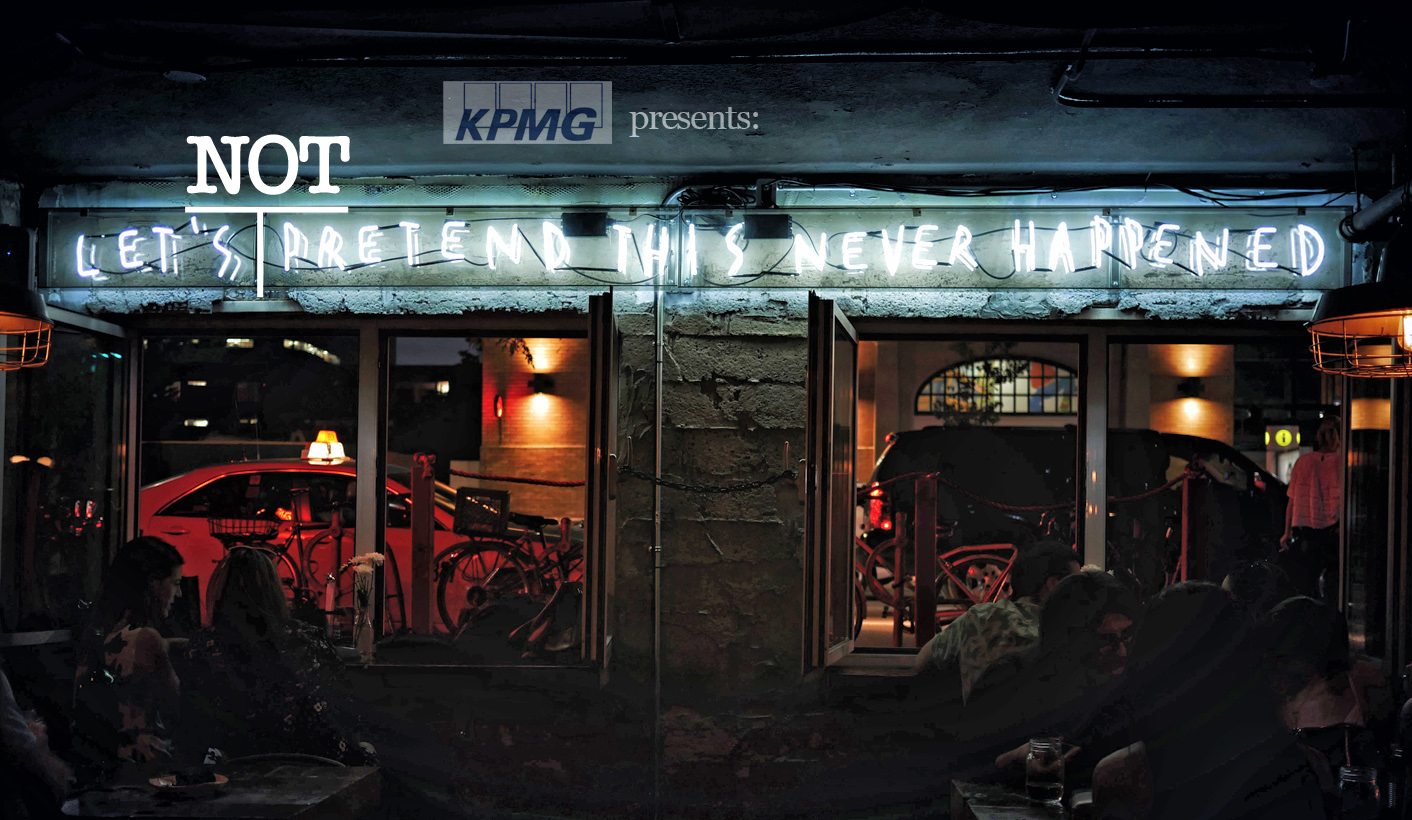 There are many – political leaders, public officials, private sector instances – whose reputations were shredded through their close proximity to the Gupta family. Some of those implicated will never recover. Global auditing giant KPMG suffered a massive body blow as Guptas' auditors and consultants, as well as for the role the firm played in the SARS “rogue unit” narrative. In its latest progress update on the day SARS commissioner Tom Moyane was suspended, KPMG has made a firm commitment to absolute transparency and has highlighted significant changes to governance, quality control and risk management. It will also, in future, be more selective about the clients it takes on. By MARIANNE THAMM.

The association of KPMG SA with the Gupta family as well as the South African Revenue Service (SARS) under the leadership of Tom Moyane was almost the kiss of death for the auditing giant, as well as many other private sector entities drawn into the deep web of corruption and illegality.

The fallout, once the #GuptaLeaks made evident the extent of the Gupta family’s stealthy capture of the state – aided and abetted by the private sector, public officials and high-ranking ANC politicians – was swift and brutal.

Six months after the announcement of sweeping reforms, Professor Wiseman Nkuhlu (who took up his position as Non-executive Chairman Elect of the KPMG SA board on 1 March) and CEO Nhlamu Dlomu have reported back to staff, setting out the course the firm has already charted and will continue to chart post the Gupta and SARS scandals in a concerted effort to claw back credibility.

One of the key decisions is that there will be a centralised system for “client acceptance” as well as a tightening of client engagements. Client acceptance is now done by a centrally located team of “risk management professionals”.

Prospective KPMG clients can also expect to undergo detailed background checks that will include “related parties of individual entities that comprise the client, including group companies, shareholders and directors”.

The firm also terminated its relationship with some clients after reviewing its entire client portfolio. Over and above this, KPMG SA has completed an assessment of the services it offers “to ensure that the risks associated with the various services provided across the audit, tax and advisory functions remain acceptable, bearing in mind the economic and political environment in which the firm operates.”

Meanwhile, KPMG had returned, on 29 January, the R23-million it had been paid to conduct the forensic report for SARS.

In his message to KPMG staff, Professor Nkuhlu pointed out that this was a critical time for the country and the auditing profession.

“Across the nation, we have seen institutions weakened, and too often leaders in the private and public sectors have failed to stand up for the values our democracy was built on,” said Professor Nkhulu.

The role of a professional services firm such as KPMG, he said, “is ultimately to serve the public interest” and to stand for “ethical conduct, transparency and respected values”.

Dlomu told staff that the firm had taken “full responsibility for the mistakes that were made and have apologised unreservedly for the impact of our actions”.

Dlomu also undertook to produce an interim baseline Integrated Report by the end of April which will be published by the end of December 2018.

“This report, amongst other initiatives, will track progress against our key projects, support our commitment to transparency and demonstrate that our words and intent are backed up by action,” said Dlomu.

Among significant governance changes made is the separation of the exco from the board. Whereas previously the board had consisted of 16 members, including the exco, it now consists of two executive directors (as recommended by the King IV Report), two independent non-executive directors, with the remainder being elected partners. The changes, said Dlomu, would not only provide more diversity but also increased oversight of the executive.

The new board has also been downsized “to improve decision-making and efficiency”.

Apart from Professor Nkuhlu, the appointment of lawyer and authority on corporate governance, Ansi Ramalho, marks the first of the “South African Big Four” audit firms to introduce an independent non-executive chair and director to the board.

The firm had strengthened its audit practice with a committee of senior partners meeting on a monthly basis to oversee this aspect. All audit partners and staff had received training with regard to “the need for professional scepticism” as well as the auditing of significant unusual transactions and arrangements.

With regard to its relationship with SARS and the “rogue unit” report, KPMG said it had identified issues that “cannot happen again”. In so doing it had, with regard to its forensic practice, made new rules for client engagement and continuance, instituted annual training for partners and established additional controls before finalising reports.

“Particular attention will be paid to ensuring the scope and agreed procedures result in robust and comprehensive investigation of the subject matter.”

With regard to non-compliance, KPMG had put in place “more punitive sanctions” for non-compliance with internal policies and poor quality performance ratings.

KPMG staff will, in future, not be attending clients’ weddings, as permitted levels for “hospitality and gifts” had been “reduced significantly”.

With regard to two inquiries into KPMG’s conduct – the IRBA and the Ntsebeza Independent Inquiries – Dlomu said that the investigation into the audit of Linkway and the attendance at the Gupta wedding by four KPMG partners would be completed at the end of March.

KPMG had been invited by the Ntsebeza Inquiry to provide testimony at a later stage. Meanwhile, KPMG had been informed that the inquiry would not meet its scheduled completion date of 30 April.

KPMG would, said Dlomu, co-operate fully with any enquiries with regard to a complaint made by the Companies and Intellectual Properties Commission (CIPC) to SAPS regarding an alleged contravention of the Companies Act by KPMG. The same applied to the firm’s appearance at parliamentary hearings where it will be asked to explain its work carried out for the Guptas and SARS.

With regard to “engagement partner” Johan van der Walt, author of the KPMG report, Dlomu said that evidence collated by Van der Walt in connection with the Shaik corruption charges had been based largely on the same facts as the Jacob Zuma case and had been accepted by the courts in the Shaik trial and appeal.

“We have no reason to doubt the accuracy of that evidence or any further work performed in connection with it.”

The firm was in the process of setting up a fund with the R40-million in fees earned from work done for Gupta-related entities since 2002 to consider grants and donations to not-for-profit organisations.

“Applications will shortly be open for organisations who wish to apply for funding. KPMG will disburse funds to projects that demonstrate impact and which embody the highest levels of accountability, transparency and responsibility. In order to meet this objective, a strong governance structure is being established to thoroughly evaluate all proposals.”

Over and above the reforms since the September 2017 statement, an advisory council would be established to provide “advice, expertise and guidance to the CEO and the KPMG South Africa Board on socio-economic issues and broader stakeholder expectations”.

The Advisory Council’s mandate, said Dlomu, would focus on issues of public trust, the perception of the profession and effective stakeholder engagement and communications. Members of the Advisory Council would not be directors or officers of KPMG South Africa.

With regard to a stronger public interest mandate, the KPMG board’s social and ethics committee would have its mandate “expanded to include public interest matters and will include an independent non-executive director in its membership”.

Finally, the firm would be undertaking a comprehensive “culture and ethics assessment” that would be followed by an appropriate “change programme”.

Professor Nkuhlu reminded KPMG staff that “deep and meaningful reforms will take time” but was confident that “a reformed KPMG has its part to play in strengthening the profession’s standing, training our country’s current and future business leaders and in the fight against corruption”. DM